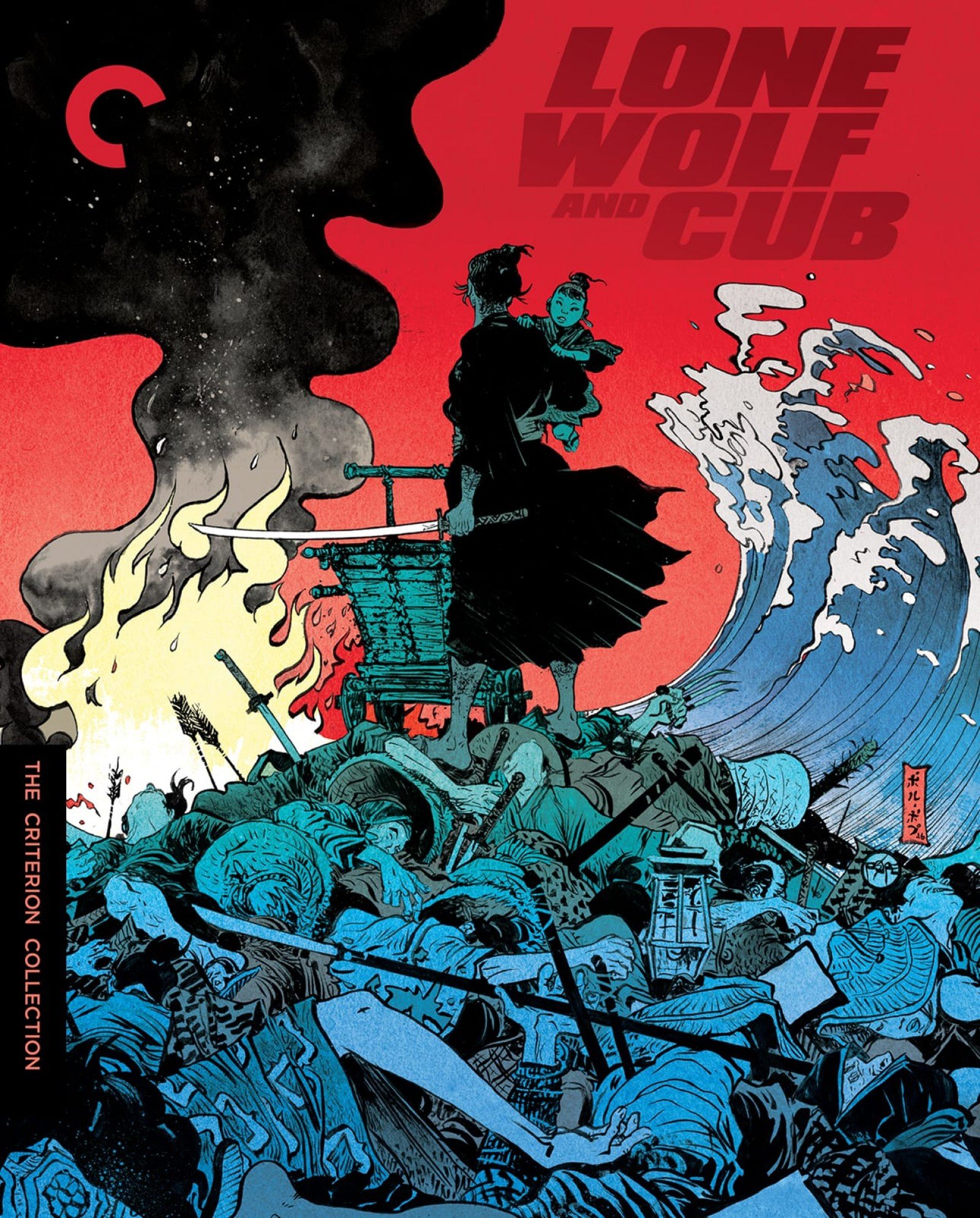 Brimming over with the cynical ultraviolence and plentiful T&A of the best exploitation filmmaking, the Lone Wolf and Cub films can be said to have inaugurated a new genre: the pulp samurai. Drawn from the ongoing manga series, the overarching storyline of the series is as simplistic as a weekly TV program: Disgraced former Shogun Decapitator Itto Ogami (Tomisaburo Wakayama) stalks the Japanese countryside, pushing before him a wooden baby cart occupied by his three-year-old son, Daigoro (Akihiro Tomikawa). For 500 gold pieces (and a good reason), he can be hired to take out anyone.

Structurally, the Lone Wolf and Cub films are pretty much interchangeable: The A plot depicts the causes and consequences of Ogami’s contracts, while the B plot concerns his ongoing feud with the Yagyu clan who murdered his wife and continue to conspire against him. Sometimes the plots intertwine, and at others they’re kept entirely discrete. The finale inevitably shows Ogami carving an absurd number of highly trained antagonists to bloody ribbons.

With his double chin and shock of perpetually disheveled hair, Wakayama cuts a rather peculiar figure as the indefatigable Ogami. All the same, not only was the actor a highly accomplished swordsman in his own right, he was also the motive force behind the series getting off the ground in the first place. He secured the rights from writer Kazuo Koike by showing up on his doorstep, executing an impressive somersault, and then demanding to play the role. The series was subsequently underwritten by Katsu Productions, a company recently created by Wakayama’s younger brother, Shintaro Katsu, who rose to prominence in the immensely popular 26-film Zatoichi cycle.

Relatively restrained by the standards of subsequent installments, Sword of Vengeance effectively establishes the backstory and relationships. Things kick into high gear with the second film, Baby Cart at the River Styx. The imagery at times approaches the pure delirium of pop surrealism: Lady ninjas in garishly patterned kimonos waylay and try to kill Ogami. Facing defeat, one leaps out of her kimono entirely, revealing an Irma Vep-style body stocking underneath. Her retreat is shot by having her run away backward, jump cuts finding her diminishing into the landscape’s vanishing point. Elsewhere, there’s the sight of Ogami effortlessly hurling both Daigoro and baby cart clear of a burning ship, and the final showdown among desert dunes, wherein Ogami faces off against the Masters of Death, one of whom gets to admire his demise in voiceover even as he splatters the sand with fountains of arterial spray.

John Woo and Quentin Tarantino both owe the Lone Wolf and Cub films a sizeable debt, but as influential as the series was, it isn’t exactly what you’d call subversive. On the whole, the films stand in stark contrast to works like Masaki Kobayashi’s Harakiri that call into question feudal Japan’s social hierarchy and the hidebound ethics of the samurai code. But that’s hardly surprising since creator Koike was himself descended from samurai stock. Indeed, Baby Cart to Hades concludes with a ringing endorsement of bushido’s “way of the warrior,” which Ogami defines as “living in death.”

Though the films are filled with wanton acts of rapine and other abuses, their attitude toward women isn’t quite as retrograde as all that. (This, too, is unsurprising since Koike also created Lady Snowblood.) Baby Cart at the River Styx features a clan of highly trained female ninjas—or “sword mistresses,” as they’re rather poetically called—who make mincemeat out of the Kurokawa clan’s best man. Baby Cart in Peril features the formidable Yuki (Michie Azuma), a tattooed assassin who tidily defeats every opponent, until she inevitably comes up against Ogami. More philosophically inclined is Baby Cart in the Land of the Demons, in which young Daigoro submits to torture rather than break a promise to the pickpocket “Quick Change” Oyo (Tomomi Sato).

Criterion’s 2K transfer looks terrific overall, reveling in the bright, deeply saturation colors (including those perennial geysers of the red stuff) and faithfully rendered fine details of costume and décor. The HD upgrade does reveal certain limitations in the original elements: Some out of focus close-up inserts and the occasional softness in low-light settings are the most noticeable. The mono tracks are sturdy enough, marred only by sporadic buzz and some tininess among the higher frequencies, while Hideo Sakurai’s propulsive, funky soundtracks sound spectacular.

The biggest bonus here is a new HD transfer of Shogun Assassin, the film that turned most Western viewers on to the series in the first place, and which went on to become a cult item in its own right. Released by Roger Corman’s New World Pictures in 1980, it stitches together highlights from the first two Lone Wolf and Cub films, overdubs an English-language narration from young Daigoro’s perspective, and slaps on one doozy of a psychotronic synth score. The hour-long documentary from Wild Side Films, “Lame d’Un Père, L’Âme d’Un Sabre” (“Blade of a Father, Soul of a Saber”), provides an excellent overview of the source material, highlights star Tomisaburo Wakayama’s role in the genesis of the series, delves into production histories and filmmaking techniques, and compares the films’ depictions of sex and violence with other period chanbara pictures. Best bit: Wakayama kills off the series when they hire someone else to play Itto Ogami in the TV version.

Manga writer Kazuo Koike, who also scripted five of the films, talks about his inspirations for the characters, the static nature of comic books versus the dynamism of cinema, and resisting pressure from the suits not to kill off Ogami in the end. Biographer Kazuma Nozawa goes into the career of director Kenji Misumi, who directed four of the films, and how his early life and wartime experiences in a Siberian POW camp may have influenced the graphic violence and bleak worldview on display in his films. Sensei Yoshimitsu Katsue, 15th headmaster of the Suio-ryu martial-arts system (as used in the films), discusses the differences between real-world and cinematic swordsmanship. Finally, there’s an interesting silent newsreel-type documentary from 1939 (with an optional ambient score by Ryan Francis) on the process of fashioning authentic samurai swords.

Lone Wolf and Cub slashes its way onto Blu-ray with a katana-sharp transfer and a baby cartload of bonus materials in Criterion’s terrific box set.