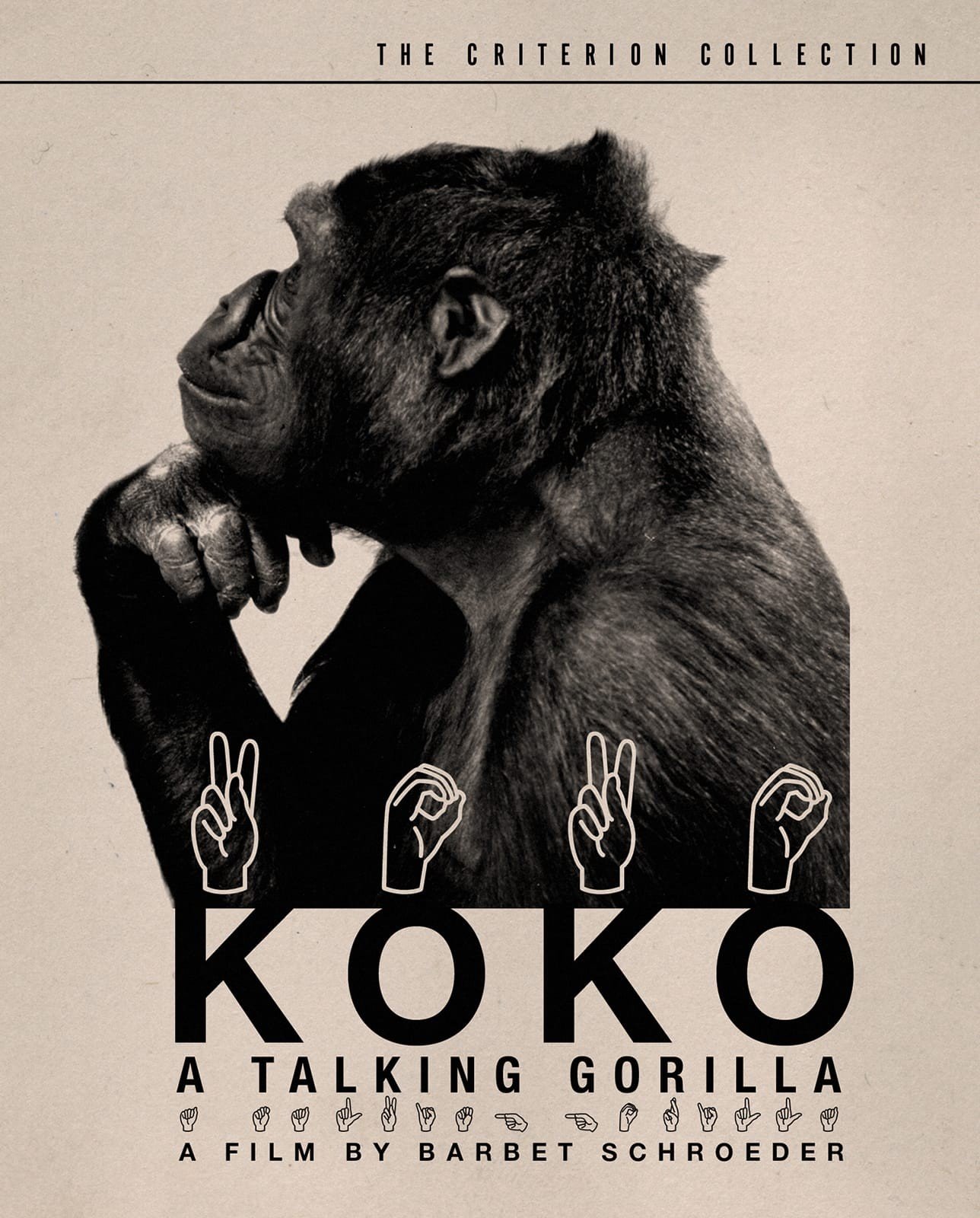 To swipe a lame pun from a Tales from the Crypt comic, Koko is sure the gorilla of my dreams. Well, not really my dreams, actually, but rather the dreams of anyone for whom chasing down the origin of the species is a primary life goal. Barbet Schroeder’s close-but-no-Herzog documentary from 1978 shows a young Koko and her trainer-mentor Dr. Penny Patterson in the salad days of their educational relationship. Patterson has dedicated her life, essentially, to the Gorilla Foundation. More specifically, she hopes to raise humanity’s awareness of the “humanity” in other animals, thereby engendering sympathy for endangered species. On the surface, Schroeder’s documentary plays a tad like the matinee feature of Earth Day at the Movies, with only a couple of risible interview snippets from outside observers seemingly trying to make an ethical controversy out of a frankly innocuous proposition. (Admittedly that assessment reveals my non-political belief in some form of evolution.) But, far be it from us at Slant Magazine to soft-pedal our sweet spot for simians. Koko might not break down the barrier of recognition between the spectator and the subject so efficiently or bizarrely as the moment a zoo chimp snags the lens shade off of Werner Herzog’s camera, thereby becoming the only member of Land of Silence and Darkness’s cast to imply their ability to see out. But there’s something to be said for Schroeder’s un-Herzogian narrative silence, broken only in the film’s fumbling final minute. Schroeder lets Patterson translate Koko’s signs and, in many cases, her non-verbal cues. We are held culpable for taking it for granted that Patterson’s running commentary is accurate. Sure, Koko might be some sort of poet for using her limited human vocabulary to call a watermelon a “candy drink,” or call a stale cinnamon roll “cookie rock,” but we’re still left in the dark about the emotional state of Koko in the film’s terrifying moments when the strenuous mentor-student relationship threatens to revert to a civilized waif in the sights of the big-triceped wild kingdom. (It has to be said that Patterson has Faye Wray’s blond locks, though there’s no reason to suspect that’s the reason she was chosen or allowed to become the Gorilla Foundation’s human spokesmodel.) That’s when the French-commissioned film yields to the Olympian philosophical legacy of its German-blooded director. What does it mean to identify something as having “humanity”? Is it ethical to recast a different species’ instinctual DNA? Is this what it sounds like when monkeys cry? Apparently the bare ass of Rodin’s “Thinker” hides a prehensile tail.

With a name like Néstor Almendros, it has to look good. Criterion’s full frame transfer looks so good, I actually assumed for a while that it had been filmed sometime in the 1990s instead of three decades ago. While it won’t be confused for a Terrence Malick film, Koko’s shots get extremely intimate, frequently getting at ground level with the gorilla starlet. Colors are mainly flawless and I only noticed one brief hairline scratch down the center of the frame for a few seconds. The mono sound once again proves that audio is the missing link in older films.

I dunno, couldn’t they have even thrown in a pre-stamped envelope suggesting appropriate donation amounts to the Gorilla Foundation? Especially since one of the only included bonus features-Gary Indiana’s booklet essay-laments how much more dire the situation of wild gorillas has become since Koko’s filming. Otherwise, all the disc comes with is the original French narration soundtrack (pointless for all but a collective two minutes), a new video introduction from Schroeder, and an old essay by Marguerite Duras pre-lubricated with that quintessentially French brand of enlightened racism. “This large animal.black in color, is of an ugliness so beautiful.I shall call her Africa.” And I shall call Geraldine Chaplin to orate Duras’s words in the character of Opal from the BBC.

From now on, I’ll give pause to the fact that the gorilla at St. Paul’s Como Zoo used to flip off passersby before throwing shit at them.