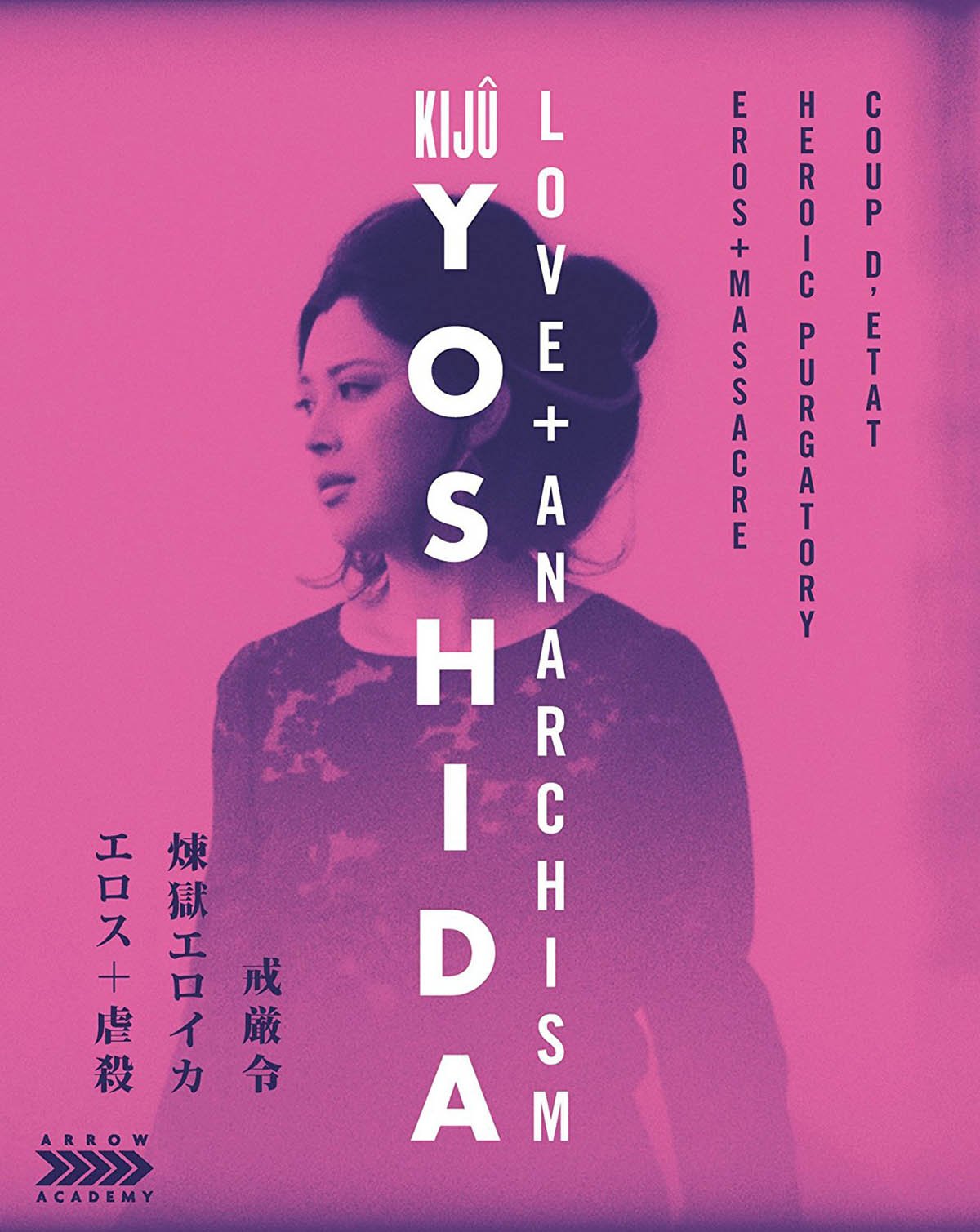 Compared to filmmakers like Nagisa Oshima or Shôhei Imamura, Kiju Yoshida remains a lesser-known light of the Japanese New Wave, a lamentable state of affairs that this new box set from Arrow Video should go a long way toward rectifying. The three films included in Love + Anarchism form a loose-knit trilogy on political themes, investigating the ramifications of different political ideologies—anarchism, communism, and a particularly virulent strain of nationalism—on key moments in 20th-century Japanese history. What’s more, Yoshida proves himself to be a master visual stylist, consistently employing deliriously off-center framing and fluidly roving camera movement as a means to catch viewers off guard and keep them ruminating on the postmodern complexities of his narrative form.

Widely considered Yoshida’s masterpiece, Eros + Massacre brings an epic scale to its intimate portrayal of Sakae Osugi (Toshiyuki Hosokawa), a free-love-espousing anarchist who, along with his lover, Noe Ito (Mariko Okada), was murdered by a right-wing militarist faction within the Japanese government in 1923. Over the course of the film, Yoshida gives us a firm grounding in Osugi and Ito’s shibboleths concerning personal freedom and emancipated feminism. But this is just about the complete antithesis of a conventional biopic: Rather than offering a stable, seemingly authoritative narrative, the film keeps alternating unpredictably between episodes from Osugi’s life and modern-day events involving two students, Eiko (Toshiko Ii) and Wada (Daijiro Harada), who are researching Osugi’s philosophical tenets.

At first these timelines remain discreetly separate, delineated by two very different editing rhythms and styles of acting. The Taisho-era storyline is deliberately paced and at times features overtly theatrical performances. The present-day material, on the other hand, embraces the avant-garde abstractions of a Godard film, full of deliberate spatiotemporal discontinuities and fourth-wall-shattering “roleplaying,” with Eiko and Wada periodically amusing themselves by stepping into the shoes of various revolutionary heroes and other martyrs to the cause.

As Eros + Massacre unfolds, the time periods begin to bleed together. Characters from the 1910s suddenly show up in 1969. Eiko has the opportunity to interview Noe Ito in person, but she remains elusive and enigmatic. If, as David Desser points out in his commentary, the film is about constructing a “usable past,” it remains unclear at the end what use preceding events can possibly be to Eiko and Wada. The film’s centerpiece—a Rashomon-style restaging in triplicate of the 1916 attempt on Osugi’s life by jealous lover Itsuko Masaoka (Yuko Kusunoki)—seems intended to demonstrate the unreliable pliability of the past. With each repetition, the motivation for, and even the perpetrator of, Osugi’s stabbing changes.

Eros + Massacre foregrounds the idea that history remains a battlefield open to the countervailing forces of interpretation with a surreal early scene depicting a rugby scrimmage where Osugi’s burial urn takes the place of the football. His legacy is, quite literally, up for grabs. And, as far as the instrumentality of the past goes, the film ends on a suitably ironic note: Eiko and Wada gather the entire dramatis personae of the Taisho-era storyline for a group photo. “This will make a marvelous monument for the future,” Wada predicts. The past as scrupulous recreation, fantasia of possibilities, picture-postcard souvenir—Eros + Massacre operates on all these registers. In the film’s final image, a soundstage door in the bottom right of the frame clangs shut on one of Wada’s bad jokes. Maybe, after all, that’s what history is.

The most abstract and borderline impenetrable of the trilogy, Heroic Purgatory plays like an aleatory Alain Robbe-Grillet film organized around themes of espionage and betrayal that were only briefly touched on in Eros + Massacre. What plotline there is to be construed keeps circling around events in 1952 and 1960—years that saw intense, often violent left-wing protests over the ratification and renewal of the Mutual Security Act that ensured the continuing presence in Japan of the U.S. Army—and their lasting impact on events in 1970. Yoshida intensifies the technique he pioneered in Eros + Massacre: There’s little discernible difference between the various time periods, and characters seem to move from year to year with the apparent ease of stepping through a door, sometimes quite literally so.

Events are kick-started when Kanako (Mariko Okada) brings home a young woman, Ayu (Kazumi Tsutsui), who somehow miraculously survived a seemingly fatal fall that Kanako witnessed. Kanako and her husband, Shoda (Kaizo Kamoda), turn out to be members of a communist cell currently involved in an intrigue against an American ambassador that echoes a past “action” in 1960. What follows are inscrutably staged show trials, clandestine meetings amid industrial wastelands, and at least two assassination attempts.

Like Robbe-Grillet’s works, the film follows an obscure dream logic that must be submitted to before you can begin to work out the implications and ramifications of the onscreen actions. As a rumination on the increasing paranoia and brutality of a revolutionary cell, Heroic Purgatory seems clear enough. In the last shot, Kanako and Ayu stand on a train platform discussing their plans for the future, before a sudden rack focus picks up a sign over their heads that reads DEAD END.

Coup d’Etat is far more straightforward in its depiction of Ikki Kita (Rentaro Mikuni), a notorious public intellectual who was secretly executed by the government for his role in the failed coup of February 1936. Yoshida’s innovation here is to mix together the real-life history of Kita and the fictitious travails of an anonymous young soldier (Yasuo Miyake) who’s fallen under the sway of Kita’s virulent nationalism. The narrative plays out according to the distanced aesthetic of a docudrama, but Yoshida’s critique of Kita shines through in Mikuni’s performance. Kita comes across as a bundle of barely controlled mania, often seen kneeling before his domestic shrine, rattling off Buddhist sutras while the consequences of his machinations are relayed through phone calls and the sudden arrival of breathless messengers.

Wada, the impotent pyromaniac of Eros + Massacre, rejected out of hand the reductionist tendencies of psychoanalysis, but both that film and Coup d’Etat explore the intricacies and contradictions of character motivation with the scalpel-sharp skill of a trained analyst. Kita’s obsession with the emperor is an obvious case of father fixation: Witness Kita’s masochistic acts of mortification, performed with an almost religious fervor, in front of a portrait of the Meiji emperor. It’s a supreme irony, then, that Kita’s execution was ordered by the Showa emperor, in whose name he sought to abolish Japan’s recently instituted system of parliament. Playing up Kita’s fascination with religious imagery, Yoshida films his execution as an act of martyrdom, with Kita strapped to a cross before facing the firing squad.

The director’s cut of Eros + Massacre hews closer to Kiju Yoshida’s stated intention to have cinematographer Motokichi Hasegawa push the visuals into the realm of overexposure, where blown-out whites predominate and often threaten to overwhelm the imagery. The film’s theatrical version appears more “normal,” with steadier contrast levels and more clearly delineated details. There are also fewer instances of obfuscating heavy grain in the theatrical version, while black levels look deep and uncrushed in both versions. The LPCM mono tracks gets a bit tinny in the upper regions, as in fact it does for all three films included in this set. And there’s some distracting hiss evident in the Eros + Massacre director’s cut. Toshi Ichiyanagi’s score modulates from mournful classical pieces that dominate the Taisho-era sequences to a rollicking psych-rock score for the modern-day scenes.

Heroic Purgatory is the cleanest and clearest of the three films, largely (but not entirely) free of those blown whites. Contrast is well balanced and details register strongly. Ichiyanagi’s haunting score invokes an ethereal female chorus that wails plaintively. Coup d’Etat looks thick by comparison, with contrast levels a bit off, leaving some black crush and overall fuzziness. The transfer is also marred by what you might call “dupe hangover,” where parts of the image bleed over into other areas of the frame. Still, fine details appear strong, especially in well-lit scenes. Ichiyanagi’s score makes evocative use of jarringly disjunctive electronic tones.

Although newcomers will likely want to view the director’s cut of Eros + Massacre before (or even instead of) the truncated theatrical version, it actually pays to take in the bonus materials the other way around: Desser’s introduction to the theatrical version sets the historical stage for the film, and his select-scene commentaries delve into larger thematic and sociopolitical issues, while his coverage of the director’s cut is keyed to the extended or entirely excised scenes particular to that version. His select-scene commentaries for all three films are unsurprisingly strong when it comes to conveying cultural and political information, and pointing out Yoshida’s unconventional directorial techniques, but at times Desser devolves into blandly (and confusedly) restating what’s happening on screen. The documentary on Eros + Massacre provides plenty of context from French film critics Mathieu Capel and Jean Douchet, and, even better, lets Yoshida lay out his own philosophical and political intentions for the film, as do Yoshida’s separate introductions to Heroic Purgatory and Coup d’Etat. The perfect-bound book contains an overview of Yoshida’s career from Desser, a piece on the political trilogy from Isolde Standish, and a look at Yoshida’s relationship with distributor Art Theatre Guild by Dick Stegewerns.