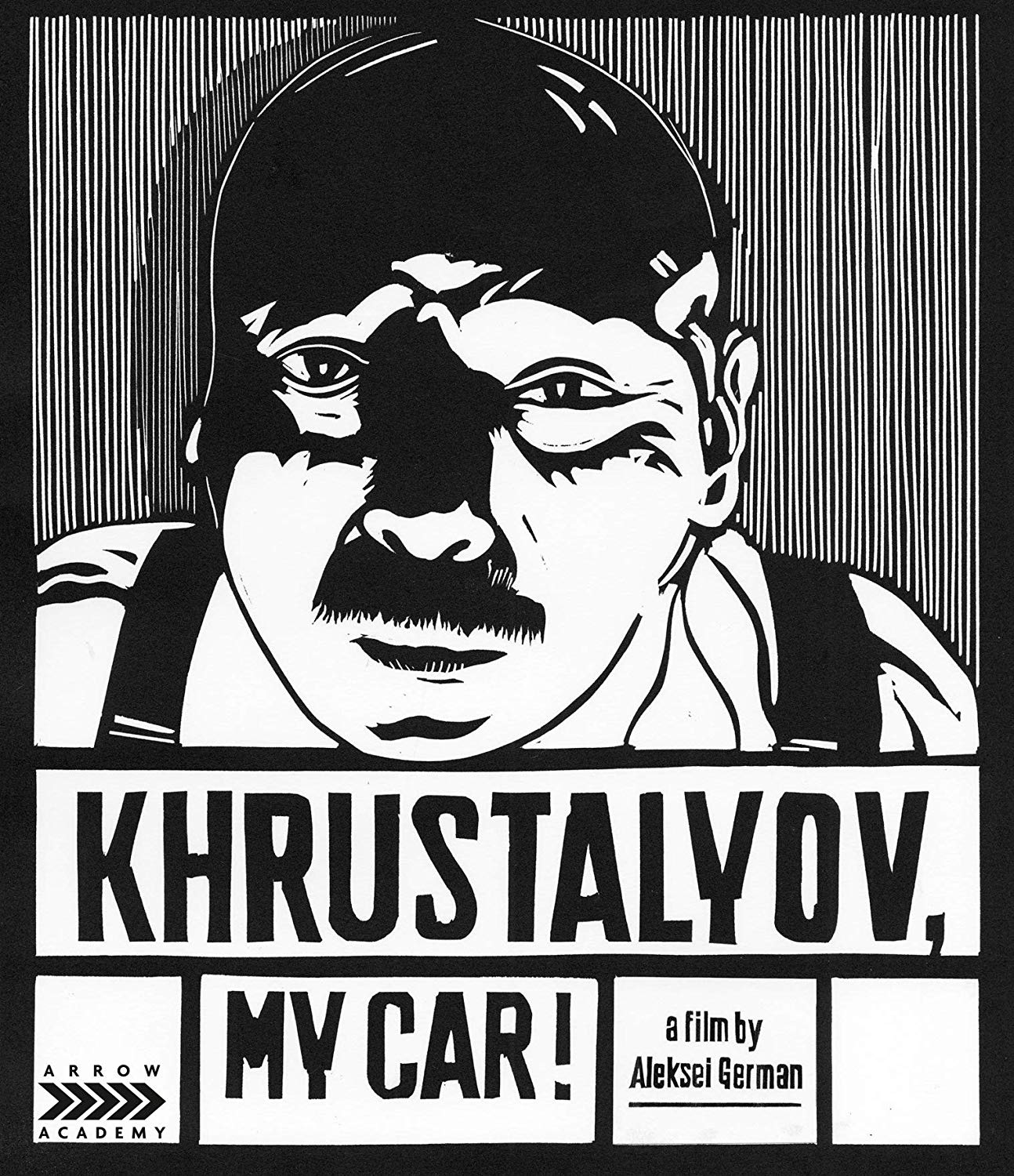 Aleksei German’s films are united by their obsession with satirizing the twisted logic of authoritarian power, and by a strange and singular style that undermines André Bazin’s belief that the use of deep focus and long takes communicates a sense of the real. Indeed, the longer a shot lasts in one of German’s films, the more untethered from reality they come to feel. Abrupt and disorienting upheavals in set design and lighting effectively plunge his work into a subjective realm of byzantine social prisons. Set in the final days of Stalin’s reign, Khrustalyov, My Car! uses its visual density to embody the sick farce of Stalinism, its claustrophobic and unpredictable production design and direction a testament to the complete lack of security that Russians constantly felt under Stalinism.

At the heart of the fundamentally simple but abstrusely rendered story is the so-called Doctors’ plot, a scheme concocted by Stalin and his secret police that—in order to justify the brutal arrest of dissidents, political rivals, and ordinary citizens to maintain the communist leader’s power—implicated Jewish doctors as insurgent Zionists. We see the conspiracy target Yuri Klensky (Yuri Tsurilo), a general and surgeon who never openly references the crackdowns but visibly lives in fear of being abducted. Klensky listlessly drifts through the Russian underground, drowning in alcohol and enjoying all sorts of Dionysian pleasures while he still has his freedom. Eventually, his paranoia is justified, and Klensky finds himself arrested and his assets seized before he’s sent to a labor camp where he endures unspeakable cruelty.

The story’s basic outline provides a framework onto which German projects a hallucinatory vision of Russian repression. The film’s black-and-white photography is of such extreme contrast that the whites attain an almost nuclear glow. Lamps and headlights blaze intensely and wash out whole swathes of the frame, while darkness melts other sections into inky and ominous voids, from which it seems anyone could be lurking and watching. German’s long takes are elaborate displays of intricate set design, with shots often beginning in one locale, such as a hospital ward, before suddenly spiraling into new realms filled with opulent artifacts of the tsarist era or the dilapidated clutter of the working class—settings that suggest refuse bins for all the decadence and decay that Stalin’s regime wishes to sweep under the rug.

Throughout Khrustalyov, My Car!, German lends a subtle anonymity to even his major characters by contrasting their visages with those of identical twins and lookalikes, all in the interest of emphasizing the de-individualized collective of Soviet life. He also effectively pitches the underground as a repository for all the Russian history that’s being tamped down by Stalinist revisionism, a place where 19th-century aristocrats and 20th-century proles commingle in shared refuge from the forces that wish to obliterate them.

As such, even the moments of revelry among these people with whom Klensky cavorts are charged with tension. The widespread paranoia among Soviet citizens is most clearly communicated through the way background characters, so keenly aware of constantly being surveilled, often look directly into the camera. This fear persists unabated even in the strange, almost dreamlike final act in which Klensky is freed from his hellish internment and brought to the bed of a withered, soiled old man (Ali Misirov) revealed to be Stalin himself. The man is so pitiful that Klensky cannot fathom that he’s the supreme dictator. “Is he your father?” asks the doctor to an attending officer, to which the man responds: “Good way to put it.”

The ranking soldiers who watch over the Soviet Union’s dying leader do so with stiff apprehension, as if worried that at any moment Stalin might leap from his deathbed and have them all shot for catching him at his most vulnerable. The leader’s death acts as the punchline to German’s sick comedy, and it sets up the ironic return to normalcy in the film’s coda, in which Klensky and his family head home, unable to speak of their trauma and repressed again when a neighbor downplays whatever happened to the family by cheerfully enthusing, “They’re Russian, they’ll sort it out. We’ll carry on, as always.” Of course, the speed with which the system adjusts to the death of a supposedly singular figure like Stalin gives lie to this hope, and German ends Khrustalyov, My Car! on a note of implied fatalism that the only through line of Russian history is this constant oppression.

The film’s blown-out black-and-white cinematography looks gorgeous on Arrow’s Blu-ray, which is sourced from a 2K restoration. The glowing whites burn so intensely that some images are hard to look at, while black levels are entirely free from crushing artifacts. Only a handful of location shots, like one filmed in a forest in a snowstorm, show any debris or other imperfections. True to German’s style, the deep-focus photography is crystalline, and even shots deliberately obscured by smears of smoke and grime show off the crispness of objects and people. The cacophony of the soundtrack, as crucial to the film’s sense of paranoia as its visual clutter, is similarly pristine, with every exaggerated sound effect and dialogue dubbing rendered clearly to make the layering of each sound all the more dizzying.

Arrow’s Blu-ray boasts some of the best special features included on a home-video release in years. An audio commentary by Arrow producer Daniel Bird extensively covers Aleksei German’s career, Khrustalyov, My Car!’s aesthetic and thematic touchstones, and details about the film’s complicated production. Critic Eugénie Zvonkine contributes “Between Realism and Nightmare,” a lengthy examination of the director’s perversion of realist techniques. Soviet and Jewish historian Jonathan Brent places the Doctors’ plot in the larger context of European antisemitism and Stalinist paranoia, extensively covering the history that informs the film. An archival interview with German by critic Ron Holloway digs deep into the filmmaker’s life, from the pressures of growing up with an artist father to his reluctance to make art and his pride in both his Russian and Jewish ancestry. Finally, a production documentary contains copious footage of German making the film, allowing an intimate look into the arduous staging of the film’s massive tracking shots. An accompanying booklet contains numerous essays that approach the film from various vantage points.

Arrow has outdone itself with one of its finest releases to date, preserving the beguiling, vulgar beauty of Aleksei German’s demented satire and offering a wealth of deeply researched, thorough features that delve into the riches of the director’s work.

Review: Aleksei German’s Hard to Be a God on Kino Lorber Blu-ray

Review: Hard to Be a God

Mostra 2011: The Seventh Satellite, The Lost Manuscript, The Day He Arrives, & More