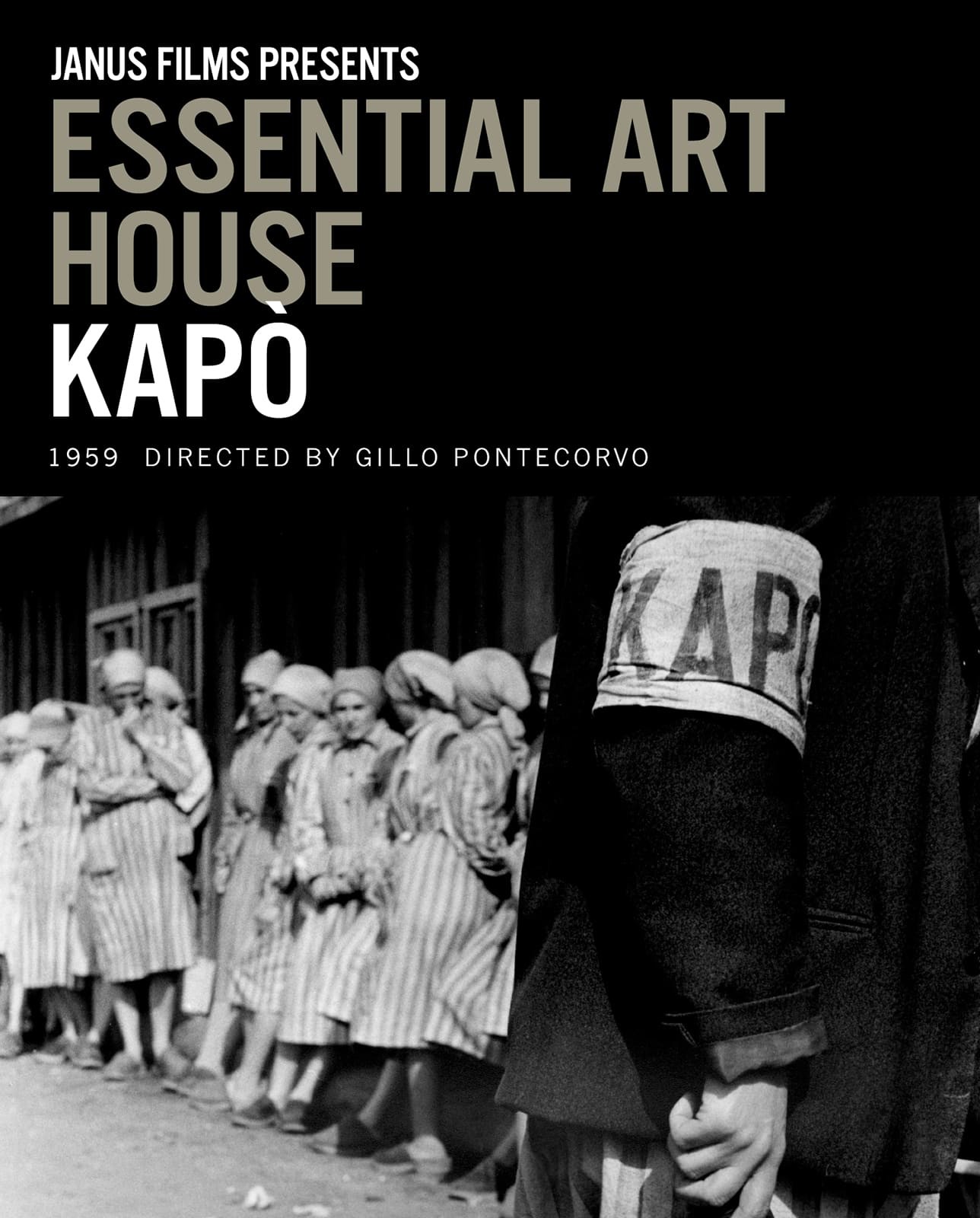 Compared to more recent, wildly ambitious WWII films (Inglorious Basterds, Lajos Koltai’s Fateless, and Black Book immediately come to mind), Gillo Pontecorvo’s Kapò might seem relatively tame in its depiction of a young Jewish girl’s ascending through the ranks at a concentration camp in Nazi-occupied Poland. Dated though it may be, when the film was released in America, five years after its opening in Italy, the glut of films dealing with the Holocaust were still rehashing revenge fantasies or bleeding-heart sentimentality in the forms of war pictures and melodramas without much in the way of the psychological complexity that Kapò offered.

For better or worse, Kapò, which Pontecorvo co-wrote with Franco Solinas, ultimately follows suit and becomes something of a melodrama in its final quarter, but not before the film, Pontecorvo’s second narrative feature after The Wide Blue Road, has thoroughly turned the screws on the audience and Edith (Susan Strasberg), a young Jew living in Nazi-occupied France. Returning from a piano lesson, Edith finds her parents being loaded into a truck and, despite the warnings of her neighbors, follows them. Separated at the concentration camp, Edith is taken under wing by the world-weary Sofia (a superb Didi Perego) and escapes certain death by trading her Star of David for a corpse’s uniform bearing a black triangle.

Denoting a criminal past, a great psychological marker that Pontecorvo employs with subtlety, the black triangle allows for Edith, who renames herself Nicole, to rise through the ranks and become a Kapò, an imprisoned commander who keeps prisoners in charge and sleeps with guards in exchange for food, preferred treatment and an exemption from work and harrowing “checkups.” Edith watches idly as both Sofia and Terese (Emmanuelle Riva), a far more maternal friend, meet their fates at the hands of the guards, one of which (Gianni Garko) takes an interest in her. But it’s not until a Russian POW named Sascha (Laurent Terzieff) arrives and begins planning an escape that Edith begins to feel romance and yearns for a life outside the barbed-wire fence.

Despite several ghastly scenes and a plethora of first-rate performances, the main attraction is Strasberg’s wide eyes surveying the carnage. Vacant, distanced, and contemplative all at once, Strasberg is reminiscent of a Bressonian “model” in her seemingly wooden expressiveness; at moments, she could pass as a dead ringer for Anne Wiazemsky in Bresson’s sublime Au Hasard Balthazar. As previously stated, the budding romance between Sascha and Edith gives the film the hew of melodrama which quickly devolves into a rote bit of martyrdom in anticipation of a climactic, devastating camp revolt. Throughout, Strasberg’s affecting gaze remains steady yet variant in meaning; it’s a great performance.

Pontecorvo will (rightly) always be remembered for the incomparable, revolutionary Battle of Algiers, but Kapò offers a look at Pontecorvo as a classical craftsman. His work with shadows, especially when Edith initially escapes a holding bunker and meets Sofia, is terrifically evocative; all the buildings loom larger than life above tiny Edith. The relatively straightforward aesthetic earned Pontecorvo his first Oscar nomination for Best Foreign Film, an award he understandably lost to Ingmar Bergman’s The Virgin Spring. If nothing else, Kapò ousts Pontecorvo as more than a one-trick pony, similar, in a way, to how Missing shed new light on Costa-Gavras after Z. The Battle of Algiers revealed Pontecorvo as a brave and singular artist, but Kapò, for all its faults, is a work based in confident form.

There are some grain issues, but overall, Gillo Pontecorvo and cinematographer Aleksander Sekulovic’s vision of life in the camps is perfectly serviceable, as is the Dolby stereo presentation.

The immense difference in price between a Criterion Collection release and an Essential Art House release is the lack of any extras, with the exception of an interesting essay by Michael Koresky in the accompanying booklet.

Released before the decimating force of The Battle of Algiers, Kapò shows a more classical side of Gillo Pontecorvo in terms of form and structure but is in line with the director’s controversial choice in subject matter.

Blu-ray Review: By Brakhage: An Anthology on the Criterion Collection