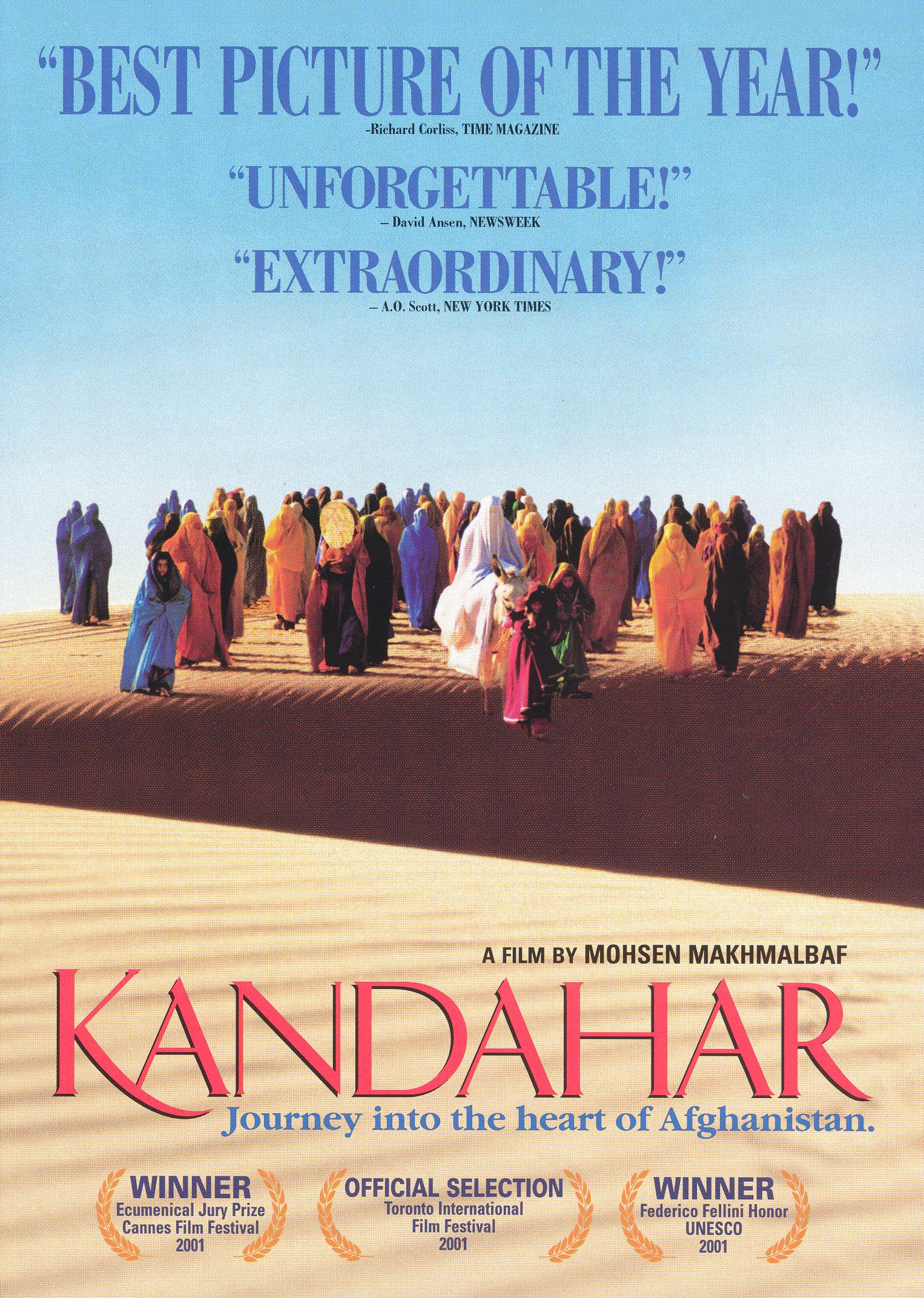 Mohsen Makhmalbaf’s stirring Kandahar benefited from a fortuitous 2001 theatrical release—the film, opening just three months after September 11th, offered a shocked and stunned American public an opportunity to learn about the desolate environment from which their shadowy enemies came. That most people didn’t understand (or care to think about) such countries before the WTC tragedy probably contributed to the general feeling that the film’s portrait of poor, hungry, destitute Afghans—as well as its affecting look at the Taliban’s institutionalized marginalization of women—was something of an exposé. However, anyone familiar with the last decade’s burgeoning Arab cinema probably found the film to be a compelling if somewhat typical tale of Muslim society’s subjugation of women through fear, intimidation, and humiliation.

This semi-true story concerns an Afghan woman named Nafas—played by Niloufar Pazira, the real-life woman whose story the film is partially based—who, after living in Canada for years, returns to her native land in a desperate attempt to stop her sister from committing suicide. A lone woman in a dangerous country that grants women precious few rights, Nafas uses her wealth to hitch rides with strangers (posing as a wife or sister, lest she’s perceived as traveling independent of a male) while attempting to make her way from the Afghanistan-Iran border to the country’s capital. Her journey offers a vivid glance of this desolate wasteland, a barren stretch of golden deserts and craggy mountain ranges where criminals roam the dusty streets, people die of simple diseases brought about by malnutrition, and landmines provide a constant threat of death or dismemberment.

Hidden by custom under a bright burka that obscures her identity, Nafas crosses the border posing as an old man’s fourth wife, but soon must find new traveling companions when the gentleman’s vehicle is hijacked; in a baffling display of religious fervor, the elderly victim of this crime begins praying to God for the thieves’ good health as his earthly possessions disappear over the horizon. Nafas then teams up with a black American who came to the country in order to help fight the Russians but found (unsurprisingly for anyone with a faint knowledge of Middle Eastern history) that, once the Russian invaders were gone, the country’s various religious sects were only interested in fighting each other over God, and thus gave up his gun for a life as a doctor.

Director Makhmalbaf captures a few gloriously surreal moments—a wave of legless men on crutches chasing a set of wooden legs parachuting down from the sky, children being cautioned not to pick up stray dolls in Afghanistan because they hide landmines, a gang of mummified burka-clad women crossing the desert for a wedding—and Pazira capably bolsters her character’s melancholy with selfless resolve even as her face remains cloaked behind a traditional religious garment. The horrors witnessed during this monumental quest may be depressingly familiar, but the brilliance and immediacy of Kandahar’s gaze is nonetheless riveting.

The 1.85:1 anamorphic widescreen transfer does an admirable job with the film’s gorgeous cinematography. Colors are vibrant, blacks are inky and rich, and there’s no shimmering present (a periodic problem with desert-set films on DVD). Contrast and shadow delineation are impressive, and only a few minor blemishes-including a strange rectangular box that momentarily appears in the middle of the screen approximately mid-way through the film-can be spotted. The Dolby Digital 2.0 Stereo soundtrack is workmanlike but generally unremarkable, with solid fidelity and a decent amount of power and clarity. Dialogue, spoken in both English and Farsi, sounds perfectly natural.

An audio commentary with star Niloufar Pazira provides listeners with fascinating background, illuminating the real-life origins of the story, her experience making the film, and what living in Afghanistan under the Taliban was like. The 20-minute Canadian television documentary “Lifting the Veil” covers quite a bit of the same ground, but still provides a good overview of how Pazira’s life provided the inspiration for the film (although it would have been nice to ditch the irritating interviewer who follows Pazira around her adopted Canadian hometown). A small photo gallery of publicity stills, the film’s international trailer, three trailers for other New Yorker DVD releases, and biographies for Pazira and director Mohsen Makhmalbaf round out the disc’s supplemental material.

Those interested in learning about the delightful home of Osama bin Laden would be well served checking out Kandahar.