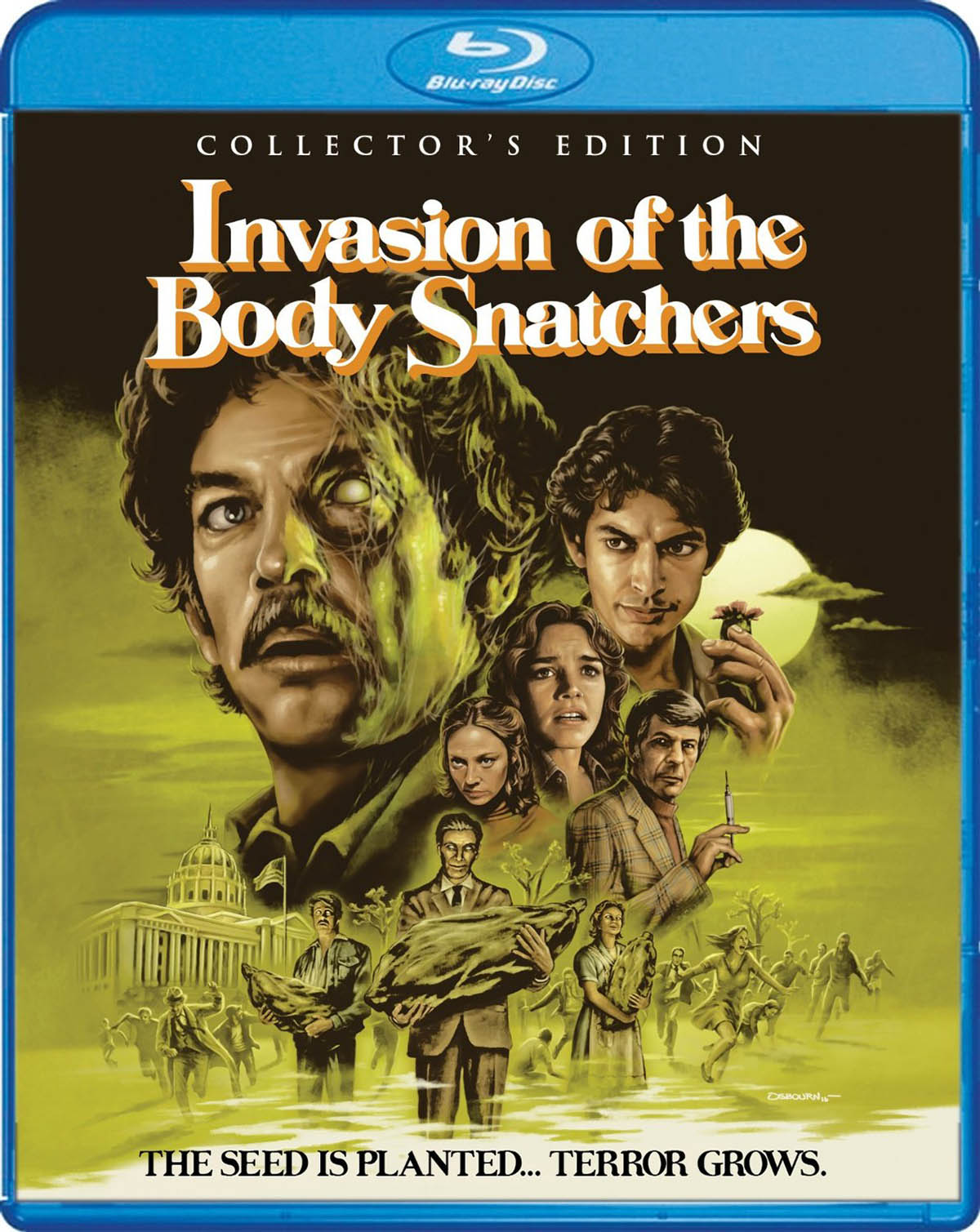 A tiny moment in Philip Kaufman’s Invasion of the Body Snatchers lingers long in the memory. Department of Health employee Matthew Bennell (Donald Sutherland) is cooking dinner at his home, slicing celery with expensive-looking cutlery, while listening to jazz and drinking wine. He’s in a sweater that he obviously favors as part of his around-the-house wardrobe when his co-worker, Elizabeth Driscoll (Brooke Adams), arrives, worried about her boyfriend, Geoffrey (Art Hindle), who isn’t acting right. It’s clear that Matthew and Elizabeth are attracted to one another, engaged in a pattern of will-they-or-won’t-they. Matthew isn’t taking Elizabeth’s concern over Geoffrey seriously, and he invites her to pour herself a glass of wine while he finishes the stir-fry he’s whipping up in his expansive wok. They have dinner outside, taking in the beautiful San Francisco skyline, and Matthew suggests that Elizabeth talk to a shrink, though he will soon accept her nightmare as his own.

This isn’t the sort of scene that one encounters in a contemporary American horror film, which, like modern American pop cinema in general, has lost nearly all interest in social quotidian. In the 1960s, ‘70s, and early ‘80s, mainstream American directors smuggled in character studies under the cover of fantasy, recognizing that each element enriched the other. Most great horror films offer something besides the horror: stories of an emotional situation that the horror dimension comes to apotheosize. This moment in Invasion of the Body Snatchers sets the stakes without appearing to, establishing the comfort that these affluent and slightly smug liberals enjoy. Matthew and Elizabeth are cozy together, and we vicariously enjoy their rapport and don’t want to see their blossoming attraction halted.

Throughout this version of Invasion of the Body Snatchers, one of the subtlest and most extraordinarily fluid of American horror films, Kaufman crafts textured scenes, rich in emotional and object-centric tactility, that cause our heads to casually spin with expectation and dread. The aforementioned scene tethers us to Matthew and Elizabeth emotionally while nurturing a satirical subtext. As many have written, this Invasion of the Body Snatchers has a glancing concern with how the rebellion and idealism of the ‘60s and ‘70s were giving way to a more mercenary corporate culture. And Matthew and Elizabeth, decent people by all the evidence the film offers, are certainly wrapped up in their own lives like most of us privileged enough to live in our own heads. They don’t wish to believe that their safety is imperiled, that their cocoons are capable of being breached.

Jack Finney’s short novel, The Body Snatchers, has been officially adapted for American cinema four times, but it’s been unfathomably influential, along with several other similarly themed stories by authors such as Robert A. Heinlein and Philip K. Dick. The notion of an alien seed that invades our planet and replaces us with pod people can mean anything, and that’s the source of the premise’s endless appeal. Kaufman’s version, which featured moneyed boomers and increasing surveillance, was interpreted as a response to Watergate and other issues characteristic of its time. Revisiting this film in 2016, it’s impossible not to associate it with our current presidential election, as comfortable liberals are understandably baffled and mortified by a forgotten electorate so bitter and disenfranchised that it chooses a gaudy and openly mercenary reality TV star as its savior.

Kaufman embraces the airy ineffability of the material. The images are intricately multilayered yet light, delicate, and often only minutely “wrong.” A drop of rainwater could be just that, or it could contain an alien spore. One notices people in the backgrounds of cityscapes who’re standing a little too still and upright. There’s no orienting expositional dialogue in the film. Kaufman asks that we comb the images and do the work of parceling the story together ourselves, as Matthew and Elizabeth must. For instance, one of the film’s most ghoulish touches, pertaining to how the pod people dispose of human corpses, is entirely established through the recurring visual motif of dump trucks in the foreground and background of the frames, collecting and crushing dusty husks that spit out a brief, bone-chilling wisp of ash. Even Matthew and Elizabeth’s relationship is undiscussed until the end, explained to us entirely through their shared body language.

Kaufman and screenwriter W.D. Richter fuse paranoia, eroticism, and flippancy to arrive at their own distinctly flakey yet intense genre-movie style. The filmmakers have gone out of their way to devise scenes which are set in places that have rarely hosted a horror-movie set piece before, such as a dry-cleaner’s, a book store, and the creepy swamp-colored spa that provides their film with one of its shock centerpieces. The legendary sound mix is rife with tingling, cooing effects that suggest outer space or the ocean, abounding in gurgling that’s complemented by flutes and the free-floating jazz that Matthew favors. The soundtrack is particularly unnerving when we get a prolonged glimpse at how the pod people hatch out of the flowers blooming all over the city, which Kaufman stages as a simultaneous birth and rape.

It’s astonishing how much tonal variation Kaufman and Richter wring out of Invasion of the Body Snatchers’s premise without crushing it. The through line is Kaufman’s expert sense of quotidian, which the pod people pervert only to resonantly restore. The scariest thing about the film’s invasion is that it doesn’t seem so bad. The compensation offered for the loss of our individuality is tranquility, which we collectively spend millions of dollars a year in drugs, therapy, and self-help trying to achieve anyway.

This transfer appropriately abounds in texture, as Invasion of the Body Snatchers is a positively hyper-tactile film. One can savor the interplay of light that informs Michael Chapman’s multilayered images, which are often filtered through curtains, windows, mirrors, or otherwise divided or segmented by walls or other scrims. Facial detail is excellent, which is of paramount important to a thriller that derives much of its suspense from the parsing of faces. The close-ups of a body in a health spa are especially eerie in their specificity, capturing precisely how intergalactic tendrils interact with flesh. Colors are often drab and muted, which is the point, though there are a variety of well-defined blacks that are pivotal to the film’s atmosphere, and an occasional punctuation of a primal green or red. The image is soft and gritty, but an overly modern, pristine refurbishing might damage the film’s intricate balance of elements. The soundtracks are understatedly immersive, preserving the rich botanical flourishes of the alien sounds as well as the enveloping menace of, say, motorcycles that’re heard passing the heroes in various planes of the frame.

Philip Kaufman’s commentary is the best supplement here, as it allows the director to wax elegantly and perceptively on the textures and influences guiding the formation of the film. Aspiring filmmakers take note: Kaufman is a well-traveled individual with a variety of interests and connections, and he was open to unconventional methods of collaboration. Witness, for instance, the hiring of psychiatrist and experimental jazz musician Denny Zeitlin to do the unforgettable score. The commentary also confirms that the film’s myriad subtexts were more or less intentionally achieved, particularly when discussing the unnerving compositions that he fashioned with cinematographer Michael Chapman. The second commentary, by author and film historian Steve Haberman, is an informative but less pleasurable listen, often suggesting a Wikipedia article read aloud, with Haberman reciting one list of facts after another regardless of what’s happening on screen.

A variety of new and old interviews cover the various facets of the film’s inception. Of notable interest are the conversations with Zeitlin and pioneering sound effects designer Ben Burtt, as they’re given to discussing their contributions with unusual specificity, noting the various instruments and aural manipulations they used to achieve specific emotional effects. The conversations with actors Brooke Adams and Art Hindle are more anecdotal, offering telling glimpses into the human element of the production at large. The theatrical trailer, TV spots, a photo gallery, and a TV adaptation of another Jack Finney story round out a sturdy package.

Shout! Factory’s disc is an attractive restoration of a funny and terrifyingly sensual portrait of conformity.

Blu-ray Review: Ingrid Bergman: In Her Own Words on the Criterion Collection