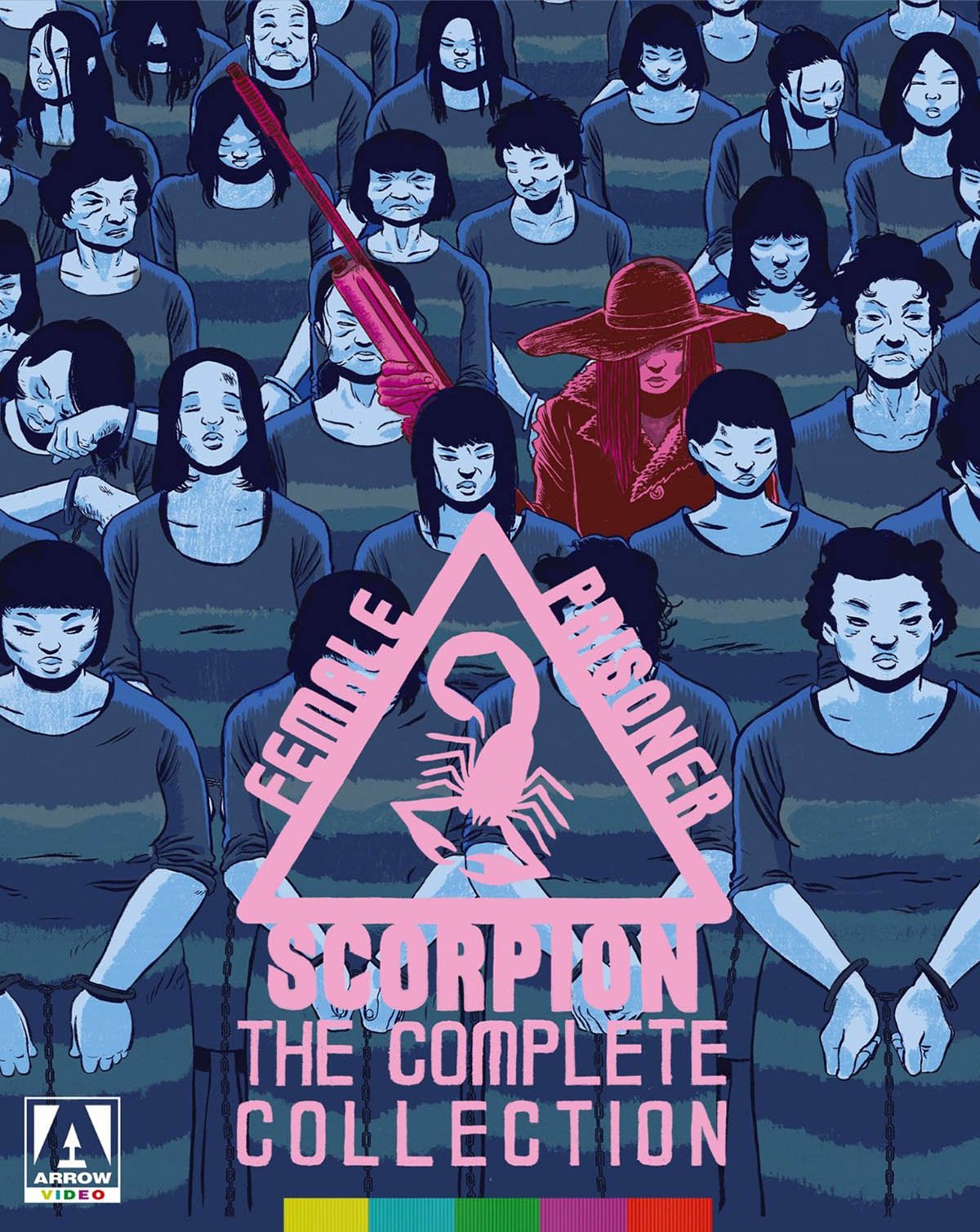 Before the 2007 New York City press screening of Hostel: Part II, Eli Roth reportedly turned to the crowd and asked: “Are you ready for some fucked-up shit?” Roth presumably blurted this out less as a question than a declaration of intent. Of course you are, his question implied. And if you weren’t, then you weren’t part of his clan. Roth’s faux-irony masks, much like the films of Quentin Tarantino, a superficial desire to mine cinema’s underground for its fucked-up-ness and repackage it for the mainstream.

Roth’s taste appears to be that of a typical gorehound; his limited bag of referential tricks includes offbeat slashers like Chopping Mall, while Tarantino’s broader knowledge reaches across national cinemas and diverse studios to encompass an obscure (at least to Western audiences) film like Female Prisoner #701: Scorpion and its three sequels. It’s easy to notice Tarantino’s affection for the series, as he used its theme song for Kill Bill: Vol. 2, but it’s harder to grasp what he values the films for beyond his fetishizing of Matsu (Meiko Kaji), a deadly heroine whose silent, stoic glare and all-black garb make her one of several influences for Uma Thurman’s The Bride.

After all, unlike the Female Prisoner Scorpion series, little in the Kill Bill films relates to tradition, nationhood, or gender. Tarantino operates under a simple-minded conception that a female warrior automatically equals a feminist icon, no matter how emptied of sociological specificity she becomes. And tellingly, violence is a starting point for Tarantino; whereas he opens his film with The Bride being bloodied and shot in the head, director Shunya Îto commences Female Prisoner #701: Scorpion with the Japanese flag being raised to full mast during a commendation ceremony for Warden Goda (Fumio Watanabe).

But the ritual is cut short by an alarm announcing a prison break. When Goda’s newly minted commendation certificate is lost and trampled on by his own men, who flee the ceremony to check on the ruckus, he furiously bends down to dust it off. The scene efficiently visualizes an ironic relationship between power and bodies, with the very feet of those men who’re meant to stand at attention and in reverence to a figurehead being the ones, instead of the loathed escapees, who dirty his piece of symbolic memorabilia.

The tension between the fist of the executive branch, which is here depicted as wholly male, and the female convicts’ efforts to assert bodily autonomy drives the first two films in the series with an assuredness that successfully navigates a varied spectrum of scenes that range from the severe to the absurd. That’s especially the case in Female Prisoner Scorpion: Jailhouse 41, the best film in the series and something of a carnivalesque masterpiece in its own right. Though the first film is assuredly gonzo with its slippage from realist to kabuki styles and back again, Jailhouse 41 makes few bids for realism of any sort, instead doubling down on its surrealist, headlong immersion into the vortex of a bizarro genre premise.

Îto also transforms the second film from a proper “women in prison” film into a road movie, where Matsu is joined on the run by a gang of women, most notably the ruthless Ôba (Kayoko Shiraishi), who at one point not only brags to Matsu about murdering her children, but about having ripped one from her womb (she’s even got the scar to prove it). Rather than structure the scene around its potential for camp, Îto undermines Ôba’s histrionic tale by zooming toward her and then, in the same shot, into a darkened pool of space beside her. As the camera performs the same action in the reverse shot with Matsu, Îto cunningly suggests a bind between the two characters through the film’s visual construction, even though their behavior couldn’t be more at odds.

These formal choices are no mere tricks, as they provide strident evidence of each character’s hallucinatory relationship to both one another and their individual, existential state. If that sounds heavy, it’s less so because of Îto’s almost musical, mathematical sense of spatial composition, in which a sideward glance can instantly prompt a camera move or one character strangling another immediately becomes a 360-degree shot of the ongoing act. Most films encode their interest in female agency through character action as an end, but Jailhouse 41 insists that the medium of film itself is the only means for actualizing this; in other words, a character’s sensations are only as strong as the camera allows them to be.

Such are Roth and his equally postmodern colleagues’ mistakes: To make “fucked-up shit,” they only know how to inflict increasing levels of pain and torment upon their characters (and audiences). Îto provides an object lesson on how to reach a bonkers state of filmic mind through angles, color, and scale while retaining his fiery critique of patriarchal power. The final scene of Matsu’s vengeance, which is too euphoric to remotely spoil, utilizes Tokyo’s skyscrapers with a fury that matches Michelangelo Antonioni or Jia Zhang-ke’s best usages of architecture within the mise-en-scène.

Unfortunately, the series’s final two films, Female Prisoner Scorpion: Beast Stable and Female Prisoner Scorpion: 701’s Grudge Song, are a significant downgrade from the previous pair, primarily because they settle for male-centric urban settings that seem more fitting for other Toei or Nikkatsu series from the time, like Outlaw Gangster: VIP or Battles Without Honor and Humanity. They also make the odd choice to minimize Matsu’s role within the narrative and make her more of a savior figure, whose attempt to go straight is thwarted by the unceasing corruption that surrounds her.

Though the films feature ample slow motion and stylized fight choreography, they also boast a more conventional shot structure and relatively stock action sequences in terms of camera work. Neither comes close to matching Jailhouse 41’s weirdly sensitive interest in seeing a band of fugitive women reckon with a succession of odd foes and increasingly violent altercations. By using such diverse textures, like lighting schemes that resemble those from the films of Mario Bava coupled with the folkloric revisionism of Onibaba and Kuroneko, Îto surely sought in his second entry, and with outright abandon, to collapse any cheap labeling of his film as pure exploitation.

Although Blu-ray presentations can’t quite do justice to the radical 2.35:1 cinematography of this series, Arrow Video has done their damndest to remain faithful to the 35mm negatives. Per the liner notes in the booklet, a set low-contrast 35mm prints were struck from the original 35mm film elements and then scanned in 2K resolution for this release. Moreover, the notes also specify that the films “favor a noticeably cyan/blue look throughout,” which Arrow has attempted to maintain across each film.

Their efforts are most evident in Jailhouse 41, where a wild color palette of blue-heavy neon consistently informs the frame, whether across faces or in the entire mise-en-scène. Color rarely looks faded or dimmed, with pools of black often providing a contrast to the brighter shades. Certainly, there are issues at times with filmic artifacts such as debris or small marks. These usually occur just before and after a reel change, though Arrow looks to have done all they can to eliminate this without compromising the look of the films. Grain remains present throughout, sometimes pervasively so.

The soundtracks for each film are clear and strong, with high decibel levels making up for the limitations of the monaural presentation, especially whenever Meiko Kaji’s theme song, “Urami Bushi,” plays (roughly at the beginning and end of each film). The care and effort in these transfers are among some of Arrow’s best work, and this release continues to cement them as one of the most capable and serious labels on the global Blu-ray market.

When Arrow Video releases a box set, they cover every potential corner of the film’s historical landscape, whether through archive materials, contemporary interviews with cast and crew, or newly filmed appreciations from directors and critics. Such is certainly the case here with a package that’s practically bursting at the seams with material. Spanning four Blu-rays with one film on each disc (DVD discs for each are also included), the set also includes a 53-page hardback booklet and a double-sided fold-out poster. Moreover, a separate filmed appreciation for the entire series appears on each disc.

The best, and most informative, appreciation comes from film critic Kier-La Janisse, who first saw the Female Prisoner Scorpion series at the Fantasia Film Festival in the late ‘90s. Janisse contextualizes the films in relation to other works within the “female revenge” subgenre and explains how many viewers incorrectly affiliate such films with rape-revenge. In fact, Janisse demonstrates, the rape-revenge tale is but a small portion of such films produced across multiple countries throughout the 1970s. Other appreciations (all of them insightful) come from director Gareth Evans, film critic Kat Ellinger, who focuses on Meiko Kaji’s role in the series, and filmmaker Kazuyoshi Kumakiri, who admits the films initially appealed to him because he enjoys watching “beautiful women behaving badly.”

The remaining extras are topped by a pair of video essays by Tom Mes, who thoroughly examines each film in the series along narrative and visual lines, while also looking at the entire career of Kaji in relation to Pinky Violence films and beyond. Also top-notch are a pair of interviews with Japanese cinema critic Jasper Sharp, who provides a career overview for directors Shunya Îto and Yasuharu Hasebe. There are also two archival interviews with Îto and one with Hasebe, while assistant director Yutaka Kohira and production designer Tadayuki Kuwana each give fresh takes on their roles during production. Finally, each disc includes the film’s theatrical trailer.

The series’s theme song states that “the reddest rose has many thorns,” but there’s nothing prickly about the transfers, extras, and packaging for Female Prisoner Scorpion: The Complete Collection, Arrow Video’s thoroughly awesome Blu-ray set, one of the year’s most essential releases.

Blu-ray Review: Tony Richardson’s A Taste of Honey on the Criterion Collection