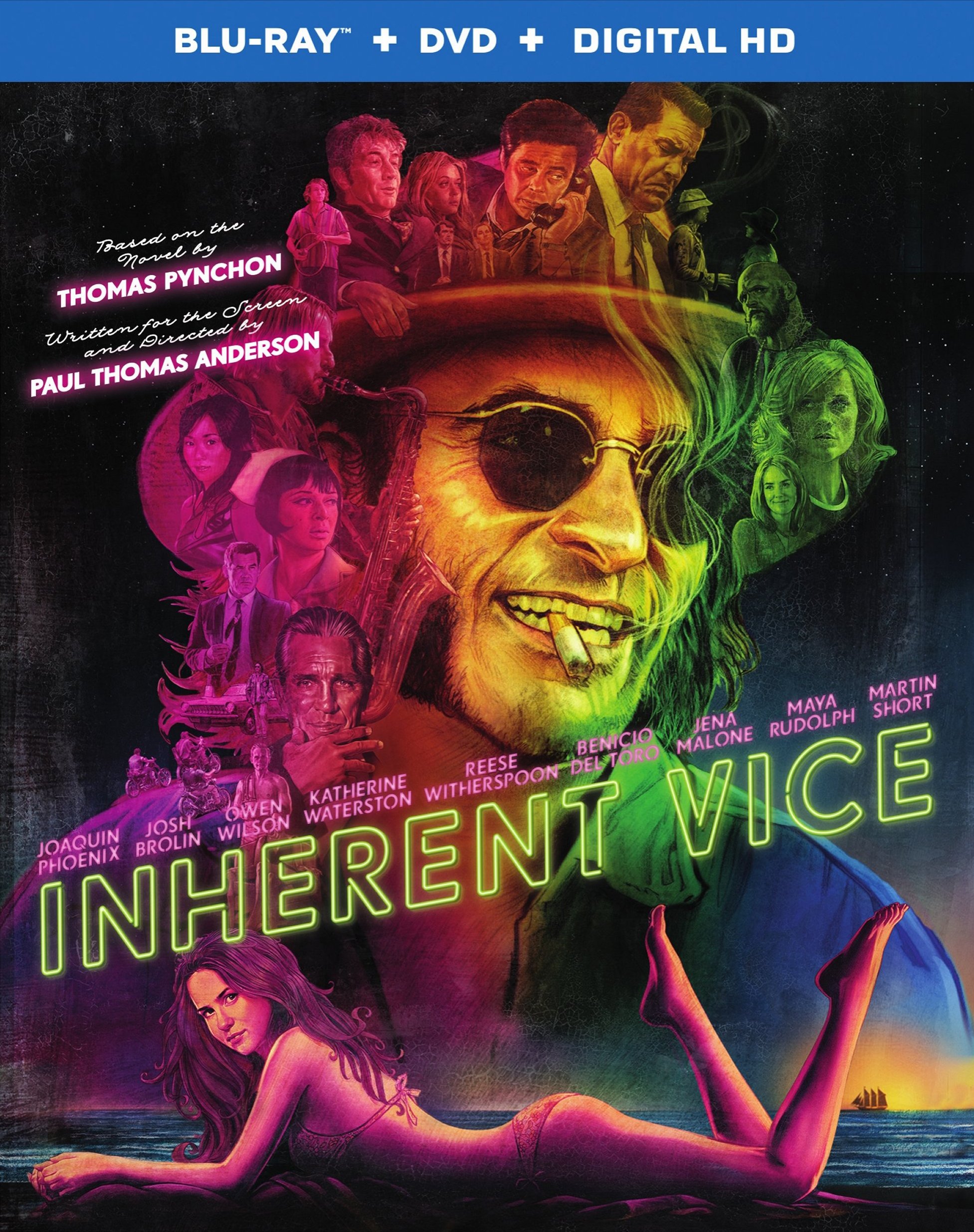 The title credit for Inherent Vice flashes on screen to the acid-funk stagger of Can’s “Vitamin C,” a fitting intro for Paul Thomas Anderson’s adaptation of Thomas Pynchon’s shaggy-dog detective story. The addled rhythm section adroitly matches the loping gait of Doc Sportello (Joaquin Phoenix), whose greasy mop and puffy mutton chops give him the impression of a high-functioning simian. The camera often seems content simply to watch Doc navigate the fictional Los Angeles hamlet of Gordita Beach, taking in his fuzzed-out comings and goings as he follows up a tip from his old flame, Shasta Fay Hepworth (Katherine Waterston).

It’s no wonder that the moment-to-moment delights of Doc’s peripatetic and increasingly convoluted journeys come to define the film over its story, which, in classic Pynchon fashion, is both indecipherably compounded and wholly irrelevant. Inherent Vice may boast the most legible of Pynchon’s narratives—and it’s ultimately no more complicated than any of the other rug-pulling anti-capers that stylistically preceded the film. But even then it dovetails into corporate brainwashing, international cartels, the faked death of a session saxophonist, white-supremacist gangs, and more. Everything is connected, but where most conspiracy movies obsess over the spider web of lines that bridge various atrocities, the film is more interested in the overall malaise generated by such total control, measure in the complex fear and loathing, and resignation, in people’s faces.

And if there’s one thing Anderson has gotten great at, it’s filming faces. The Master turned the close-up into a vista, something as worthy of blown-up 70mm grandeur as desert dunes or deep space, but the close-ups of Inherent Vice arguably explore richer emotional domains in the comically broad expressions of the actors. The focal point for any given scene usually isn’t an action itself, but Doc’s reaction to it. Trapped in a car with his unofficial nemesis and even-less-official partner, LAPD Lt. Christian “Bigfoot” Bjornsen (Josh Brolin), Doc bears witness to Bigfoot’s curious habit of eating a frozen banana in the most fellative way possible. The shot blurs Bigfoot’s slurping in the foreground, drawing the eye to Doc gazing over at the sight, first in his peripheral vision, then fully engrossed with a combination of disbelief, fascination, amusement and disgust.

Phoenix’s bewildered face becomes the film’s anchor as Doc attempts to track down Shasta’s new man, real estate mogul Mickey Wolfmann (Eric Roberts). Eventually, he uncovers a criminal syndicate that floods L.A. with smack, stringing out an already weary population of hippies to the point of total stasis. The absurdist twist? The cabal is run by dentists, who hook people on heroin, then sell them rehab, then sell them new teeth once drugs rot out their originals.

That a group as boring as dentists should be behind this obtuse scheme to drain an entire generation fits perfectly within Pynchon’s oeuvre, which is filled with conspiracies taken to logistical extremes for laughs. Yet those books also dig into complex dissections of American history and culture, and the breezy drug comedy of Inherent Vice masks possibly the most eloquent assessment yet offered on the death of the ’60s. The convolution of its plot becomes a kind of textual impressionism, a scatterbrained search for truth obscured by the very substances that provide the skeleton key to the sense of cultural collapse that permeates the story. If drugs had any impact on the hippies, the film tacitly argues, it’s in introducing a bunch of anti-capitalists to a hyper-capitalist industry that re-acclimated them to the way of things, paving the way for their turn toward conservatism and Reagan.

Reagan hangs over the film like a shroud, though it takes some time to recognize the pall given how brilliantly lit the film is. The sun shines bright in the film, and the cannabis haze that gives Robert Elswit’s cinematography its glare suggests that L.A.’s smog problem didn’t come from vehicles. It’s easy to get lost along with Doc as he shuffles along, yet gradually a feeling of saudade creeps in, a sense of loss for something no one ever noticed was gone. Period pieces about the ’60s and ’70s tend to be steeped in nostalgia, but the film depicts nostalgia as antimatter, detonating the second it materializes. This is most painfully seen in a flashback set to Neil Young’s fragile “Journey to the Past,” wherein Doc and Shasta go sprinting in the rain toward a score that doesn’t exist. The sequence—a miniature musical moment of gliding camera, incandescent lighting and expressive physical acting—is beautiful, but when Doc returns to that same spot to find a cartel HQ, that already painful memory is completely debased, the phantom dope retrofitted into nothing more than a “coming soon” advertisement and the hippie lovers into the equivalent of overzealous early adopters.

Sell-outs litter the landscape of Gordita Beach, but who can help it? Saxophonist Coy Harlingen (Owen Wilson) is a burnout drafted into anti-subversive infiltration, while his neglected wife (Jena Malone) has bridged the gap between junkie mom and housewife, cheerily sharing baby photos of her baby on heroin-poisoned breast milk and raving about her new chompers as she overshares about the loss of her original enamel to addiction. Even Bigfoot’s arc suggests that leaving the Establishment technically constitutes an abandonment of principles, and Doc can’t help but shed tears for him. Perhaps the only truly revolutionary dropout in the story is Mickey, not for his immense wealth and connections to power, but for the fact that he briefly believes the lie he and his cohorts sold to a generation and drops out, causing the system to shudder and reflexively force him back into line.

Not even Doc, whose Cro-Magnon hair pegs him as a creature from a time before money, can escape the all-consuming conformism that seeps everywhere. In both novel and film, a late exchange between Doc and a Golden Fang liaison peaks when the latter scoffs at Doc’s attempt to walk away with respect by saying, “People like you lose all claim to respect the first time they pay anybody rent.” In the book, this line is cutting, yet another jibe from a dismissive figure who disdains Doc’s futile divestment from consumerism. In the film, however, it attains its full sense of sadness, conveying an inextricable quagmire that will ensnare even the most committed iconoclast. Pynchon and Anderson can’t see back to the ’60s without seeing Reagan. They also can’t find solace that rejects of the time found in the counterculture. It’s a lot harder to believe the answer is blowin’ in the wind when you know the same guy who said that will one day glibly inform his fans that you’re going to have to serve somebody.

Warner’s Blu-ray arrives with a faultless transfer that captures a surprising amount of the 35mm film’s warmth and texture. Gauzy as the film can be, the image never wants for exceptionally detailed faces and well-contrasted colors. It’s also a pleasure to see just how much better suited for daytime exteriors 35mm is over digital, and the sunnier frames are rendered perfectly here, never washed out, but so bright that you have to shade your eyes in places. The audio is similarly strong: Much of the track is devoted to Phoenix’s deliberately inscrutable stoner mumble, but of special note is the clarity of Johnny Greenwood’s crate-digging soundtrack/score, which avoids all the usual golden hits of rock’s megalithic age in favor of outcast obscurities and curdled, comedown acid rock. These songs speak volumes about the defeatist tone underneath the farce, and their distribution in the surround mix triggers a sense of malaise well before the narrative’s agonized conclusion.

Paul Thomas Anderson long ago stopped filling his home-video releases with substantial extras, and Inherent Vice may be his least adorned offering yet. The disc comes only with four makeshift promos, trailers focused obliquely on a different facet of the film’s numerous, overlapping MacGuffins. Anderson this time has an excuse to be coy, reflecting Pynchon’s own refusal to even be seen, much less explain himself, but this disc may as well offer no features at all.

Warner’s gorgeous Blu-ray preserves Paul Thomas Anderson’s Pynchon adaptation as the director’s anti-Magnolia, a work of diaspora and defeat that proves his most haunting, and maybe best, feature.