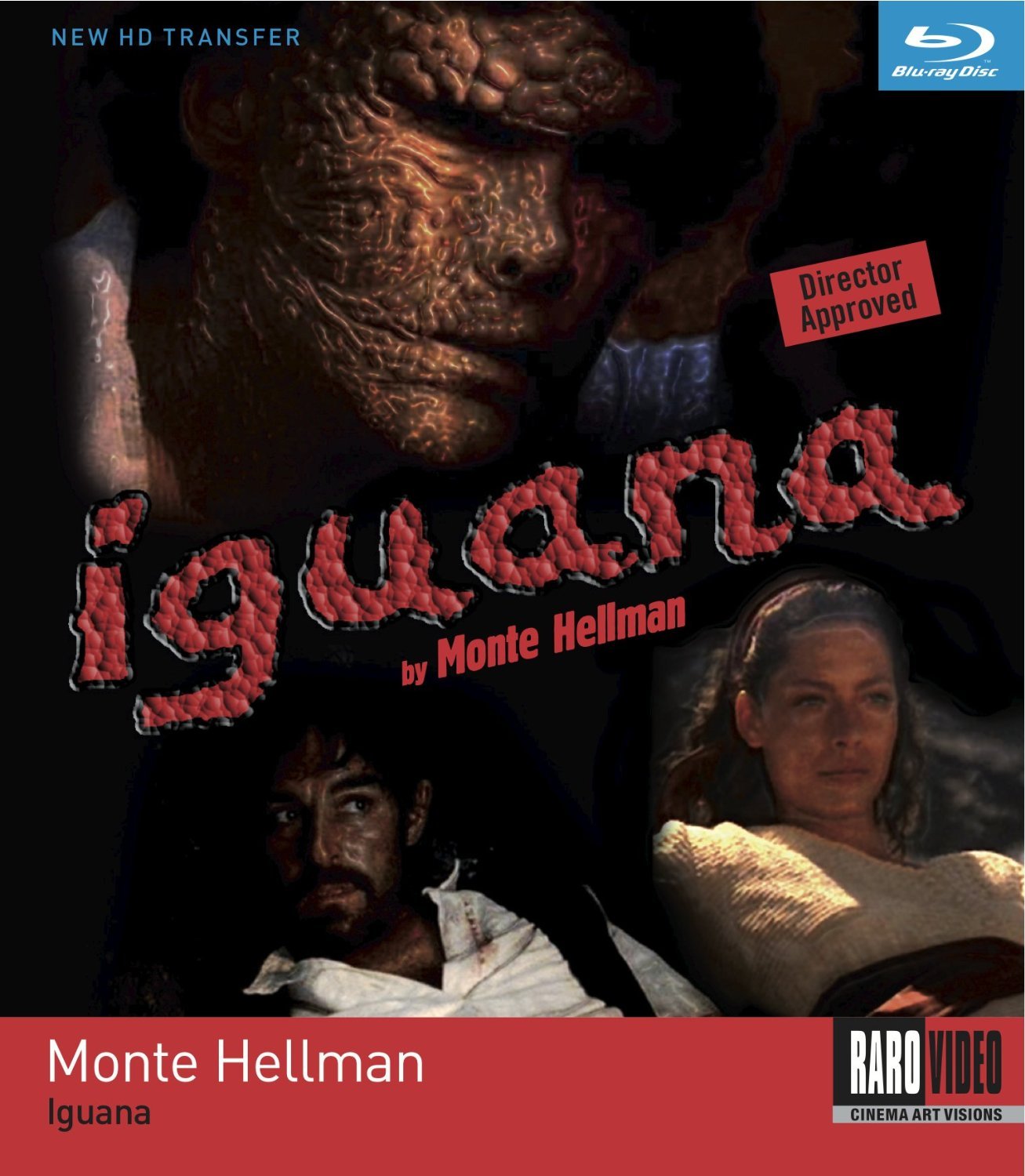 At first blush, Monte Hellman’s Iguana seems nothing more than a simple allegory about the bestial nature of man, literalized by the reptilian disfigurement of Oberlus (Everett McGill), an abused harpoonist who flees his shipmates at sea and establishes brutal rule over a nearby island. Even Hellman initially envisioned the film as a take on The Phantom of the Opera, with Oberlus as the repulsive but pitiable creature who declares revenge on the world that ostracized him. But the finished product is something altogether stranger and harder to pin down, less a portrait than a panorama of madness.

Josep M. Civit’s cinematography emphasizes the physical reality of the desolate location: craggy topography, the constant churn of foamy surf in its coves, its dank and humid caves. By the same token, numerous shots evoke a painterly use of composition and color, especially in nighttime shots lit in Caravaggian amber and shadow. Violence is intimated more than it’s shown, the film usually skipping over Oberlus laying down his tyrannical rules with abductees to show the aftermath of him having made good on his threats. And when bloodletting does occur, it happens with swift efficiency, as in an unsettling scene of Oberlus driving one shipwrecked servant to behead his friend, the bluntness of the special effect redolent of a similar moment in Werner Herzog’s Aguirre, the Wrath of God.

These concrete details are rendered abstract through Hellman’s elliptical editing, which obliterates any sense of time beyond the basic markers of daylight and night. The casual elision of weeks and months gives the impression that those whom Oberlus captures bend to his will almost immediately, a dissonant effect that only heightens the illusion of the man’s omnipotence. This broadens out the film’s thematic base to include an examination of master/slave relationships and the manner in which some can exert total authority just by confidently projecting an image of power. In more direct terms, the editing’s omission of viewpoints outside Oberlus’s own creates an unpredictable atmosphere, with people suddenly showing up on a beach with no introduction, charging their presence with the surprise and unease Oberlus feels before ensnaring them.

A notable exception to this myopic structure are scenes focused on Carmen (Maru Valdivieso), a Spanish woman whose sexual liberation brings her into conflict with her jealous lovers and Catholic society at large. Hellman intercuts Oberlus’s early scenes with Carmen’s, not only setting the stage for their eventual convergence, but tacitly connecting a common thread between the two. Oberlus is seen as monstrous among his society and violently carves out his freedom by denying it to others, but Carmen is also repudiated by her peers, only she cannot ever find freedom because the same society that condemns her for her promiscuity forces her to be with a man for validation. The film courts Straw Dogs-esque controversy for a scene in which Oberlus rapes Carmen and, while resisting and grimacing, she also expresses some pleasure. But where Peckinpah’s film suffered for the complication of an otherwise basic ideological message, Iguana fleshes out the myriad issues pressing on Carmen’s self-expression. The scene takes Carmen’s limited options for self-actualization to their dark extreme, not condemning her or belittling the act committed against her, but framing it as the logical extension of a way of life that already penalizes female sexuality. Furthermore, it completes the gradual equation of Oberlus and Carmen’s storylines by suggesting that the ostensibly extraordinary trials that drove Oberlus to declare war on all mankind are what women experience in this society as a matter of course.

As nasty as it is, the film regularly employs grace notes that add to its evocative pull. After Oberlus rapes Carmen, he speaks with another of his captives about Don Quixote, specifically his confusion as to which version of Quixote’s beloved Dulcinea is the real one: the fool’s idealized vision or Sancho’s baser descriptions of her as a whore. “Maybe she’s both,” the servant replies, this slow exchange fudging the binary depictions of women and providing some extra defense for Carmen’s complex sexuality. Later, when Oberlus sneaks back aboard his old ship, he peruses the captain’s book collection before setting fire to the ship, pulling out The Odyssey and asking if it’s fact or fiction, to which the captain replies that no one knows for sure. These miniature flourishes combine with the epic landscape cinematography to gently push the film out of the allegoric and into the mythic, capped off by a haunting final shot that ends the movie on a note of grace, albeit one so grim even Flannery O’Conner might be repulsed.

Given that the film has only existed in a truncated form over the years, it would be reasonable to expect that this complete cut would show the wear and neglect on its excised scenes. To the contrary, Raro Video’s disc looks exemplary, with a color-correction process supervised by Monte Hellman that results in a crisp image throughout. Crush is nonexistent in the many night scenes, and the softer textures of the naturally lit daytime shots retain full detail. The lossless stereo track obviously lacks depth of projection, but it’s remarkable how enveloping the constant background noise of wind and waves is despite the front-loaded channels.

A 20-minute interview with Hellman provides a cursory overview of the production and its many woes, as well as a discussion of the film’s themes and style. The original theatrical trailer is also included. A booklet contains a second interview with Hellman, covering much of the same ground as the video talk.