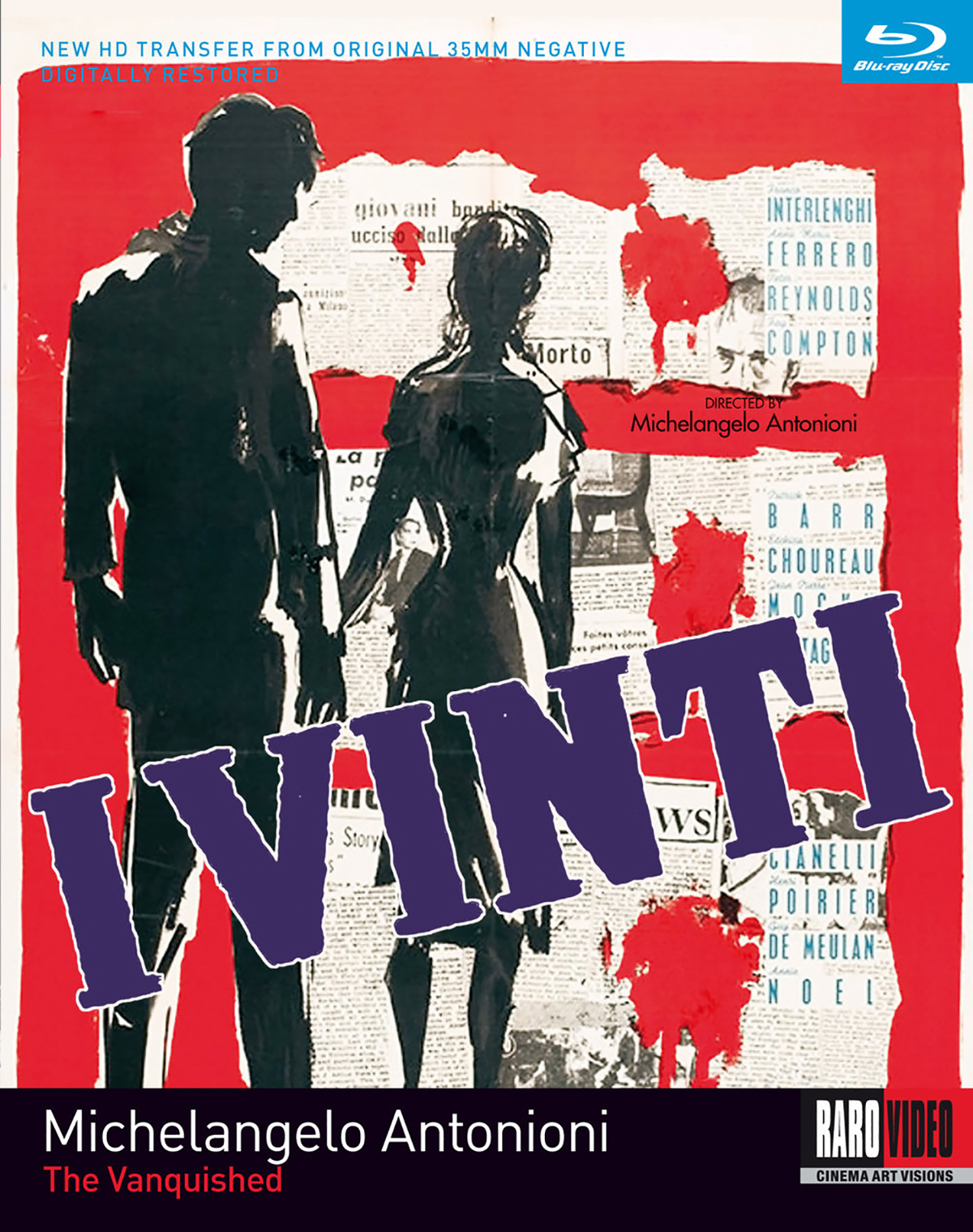 Michelangelo Antonioni’s sophomore feature, I Vinti, is a film inextricably tied to its era—which isn’t to say it’s inseparable from its contextual components. Released in 1953, the film, a narrative depicting three unrelated stories of violence perpetrated by disaffected youths, parlayed a nascent anxiety concerning post-war adolescent rebellion into a cross-cultural cautionary tale with ripped-from-the-headlines relevancy. The finished product, compromised upon release by conservative producers and distributors who would force the director to re-edit a significant portion of the film, isn’t in any form one of Antonioni’s benchmark accomplishments. What it is, however, is a fascinating snapshot of a young filmmaker figuring out his political and aesthetic ideologies on screen, and an early example of contemporary omnibus storytelling which has since proven both profitable and popular.

These “stories of the burnt-out generation,” as a voiceover narrator helpfully describes them in an opening, subsequently added newsreel-like montage, while divergent in milieu, social dynamic, and tonal register, are nonetheless thematically linked, their contrasting portraits of idle, over-privileged young men and women as unfortunately applicable to mid-century viewers as they are to modern audiences. But by setting his stories in three distinct locales (Paris, Rome, and London) amid a unique mid-century cultural climate, Antonioni is able to situate his larger subject via a topical specificity at once personal and far-reaching. No matter the grander suggestion of a universal malaise driving these characters toward such seemingly random acts of violence, each of the film’s national backers would balk at the individual social implications proffered by Antonioni and his screenwriters.

While unmistakably the work of a fresh-faced filmmaker, each of I Vinti’s three sections evidence traits of a certain budding cinematic sensibility which Antonioni would continue to fortify throughout the remaining decade. The Parisian countryside which figures prominently in the first section—following a group of students from the city to the outskirts of town where they plan on killing a friend for his money—hints at some of the picaresque landscapes which would become such psychologically volatile environments in, for example, Le Amiche and L’Avventura, while the perhaps irreconcilable divide between visible representation and the indexing of physical reality depicted in the third segment points directly toward Blowup (also perhaps not coincidentally set in England). Between these two bookending episodes there are enough traces of the metaphysical and slyly comedic instances of character interaction to mark them as the work of the Antonioni we recognize today, even within such comparatively underdeveloped stylistic confines.

Indeed, Antonioni at this point was relying more on the inherent momentum afforded by his true-to-life narratives than the formally radical sublimations of traditional dramatic frameworks which would define his celebrated work of the 1960s. With that in mind, it’s interesting to note that the middle portion of the film—the section most altered from the original version which premiered at the Venice Film Festival—is the least beholden to convention, as well as the most aesthetically prophetic. Granted, some of the political intrigue of this section is lost in the final version, which redefines the role of the young antihero from military insurgent to cigarette smuggler. But despite some excised scenes and looped dialogue, the observational style of this segment is commendably confident. And when the young man does begin to mentally breakdown following the accidental murder of a customs agent, he does so in a manner reflected in the surrounding environment; at one point he’s even framed by Antonioni in an unbalanced composition with his body pressed up against a concrete wall, a visual manifestation of the director’s interest in the divide between the psychological and the physical, which would likewise become one of his primary preoccupations. Like many of his early films, then, I Vinti represents just one of many strides by Antonioni toward a fully assimilated aesthetic and thematic language. If nowadays it appears more contextually dependent than functional, it’s worth referencing from time to time to witness not only Antonioni’s own growing pains, but also to confirm just how little things have changed in the world around us.

Raro Video has upgraded their 2011 standard-definition DVD of Michelangelo Antonioni’s I Vinti to 1080p Blu-ray, and while it looks good, it appears to have been digitally cleaned in an almost unnatural way. In their effort to reduce visual instability and noise from the picture, they’ve also taken a lot of the grain along with it. The picture darkens as a result, which seems a bit more accurate, but there’s now a smoothness to the image that doesn’t seem to quite correspond with prior editions. On the other hand, damage is kept to a minimum and blacks are rich, while whites and grays are balanced (again probably a result of the digital noise reduction). So while this is probably the best I Vinti has ever looked, I’m not sure if it was ever supposed to look quite like this.

Audio, meanwhile, is presented in two LPCM mono tracks, one in dubbed Italian (which is how the film was distributed), and one in the original mix of Italian, French, and English (all three technically dubbed as well, as was the standard in Italian productions of the day). Each track is solid enough, with dialogue upfront and clear and with little extraneous elements competing for space in the mix. Giovanni Fusco’s score is likewise loud and pushed out front, preserving a seemingly accurate balance between music and speech.

Supplements replicate the old DVD but remain welcome if modest inclusions. The original version of the Italian episode of the film is probably the most vital extra, preserving for us what audiences at Venice had the fortune of seeing and hearing upon its premiere. Elsewhere there are two interviews, one with producer Turi Vasile and the other with the Italian segment’s star, Franco Interlenghi, as well as Antonioni’s 1953 short Tentato Suicidio, which was originally part of the omnibus film L’Amore in Città. Lastly there’s a short essay by Stefania Parigi included in the package outlining the history and reception of the film.

While not a benchmark accomplishment, Michelangelo Antonioni’s I Vinti remains a fascinating, occasionally prophetic snapshot of a young filmmaker figuring out his political and aesthetic ideologies.