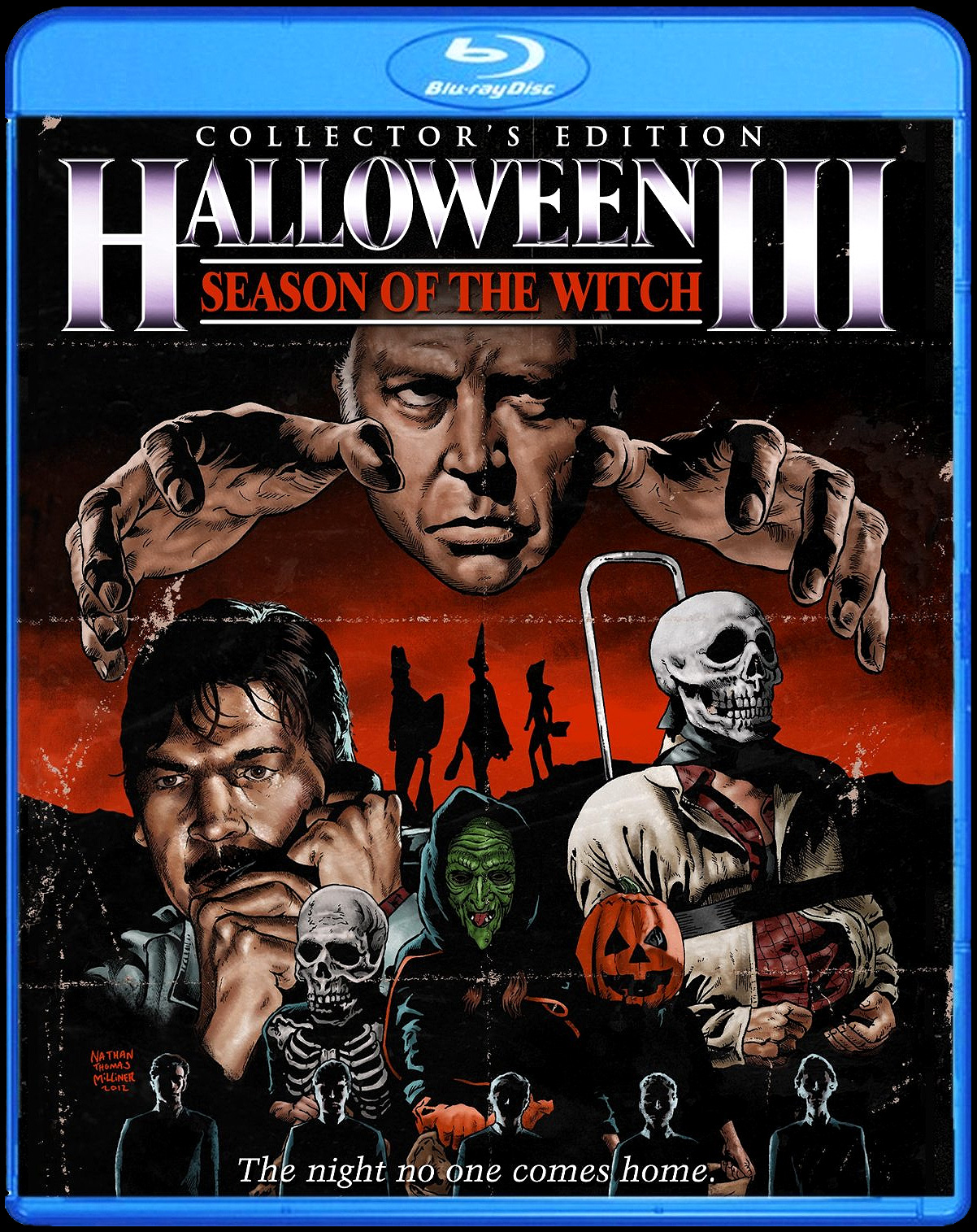 At the time of its release, Halloween III: Season of the Witch was a notorious crash-and-burn—a radical attempt to redefine a blossoming series that was met with critical indifference and audience resentment. The film wasn’t set in the town of Haddonfield, Illinois, had nothing to do with the tortured and beleaguered Laurie Strode, and, most gallingly to fans, didn’t feature the already-iconic masked killer Michael Myers. Instead, the third entry concerns a coven of witches who’ve decided to get with the times and go corporate.

It’s understandable why producers John Carpenter and Debra Hill were looking to start afresh. Halloween II, which the filmmakers tentatively oversaw after Universal Pictures made it abundantly clear that it would be made with or without their involvement, is of interest only as a subtextual statement of contempt. The film was nihilistic and gory, with a desperate soap-operatic twist that needlessly gummed up a scenario that was once elegantly streamlined. Carpenter and Hill had clearly moved on from Michael Myers, and were eager to work on a wider range of projects, such as allowing the Halloween franchise to evolve as a broader collection of standalone tales that could move in any direction a new filmmaker saw fit.

Halloween III, as someone says in one of the documentaries included on the Blu-ray, might’ve gone over better with viewers if it had been called Season of the Witch and marketed as a new John Carpenter production, but who knows. Taken on its terms, Halloween III is a fairly effective cult oddity that’s even nastier and more cynical than its predecessor. The story, a mixture of Invasion of the Body Snatchers, The Stepford Wives, and Willy Wonka & the Chocolate Factory, among a number of others, is about a doctor (Tom Atkins) who teams with a sexy young woman (Stacey Nelkin) to solve the mystery of her father’s murder. Said mystery leads them to an eerily desolate small town that’s unofficially presided over by Cochran (Dan O’Herlihy), a manufacturer of high-quality Halloween masks who’s revealed to be the leader of a coven of Irish witches who’re plotting the grand demise of America’s children.

That plot gives you an idea of how casually insane this movie is, but if you’re able to radically suspend your disbelief (the story is an illogical shambles), the film offers a number of modest pleasures. Writer-director Tommy Lee Wallace, who served as editor and production designer on the original Halloween, does a competent job of aping Carpenter’s distinctive use of scope framing to establish an effective nighttime atmosphere of mounting dread, and the second half of the film offers one startling, queasy sequence in which Cochran tests his scheme on a pointedly obnoxious family.

Halloween III also has more than a trace of that anti-authoritative outrage that characterized particularly the 1980s Carpenter films, which is most obvious in the movie’s premise of a corporation that’s eating a small town alive while plotting to actively destroy a large portion of the population with its deliberately lethal product. But Halloween III, like They Live, isn’t slapping just the face of the corporations, but of the populace who mindlessly consumes their poisons. One gets an uncomfortable impression that the filmmakers believe that the children damn near deserve their fates, and that gives the film a nasty, disreputable nightmare edge that’s compounded by the fact that there aren’t any likeable or upstanding characters here. This is pulp hokum that you might not immediately shake, as it has a weird, sleazy power.

The film looks better than ever before, sporting a transfer that allows for greater depth and texture. The darker colors, predominantly the blacks and blues, have a rich luster, and the oranges and greens, particularly of the masks that figure prominently in the narrative, glow with a newfound clarity. The image is soft at times, and there’s grain, but these issues are truthful to the original print of the film; transfer issues that can be expected of Blu-ray editions of older films such as compression are barely detectable here. While one wishes that the sound mix had been upgraded to 5.1, the mono track still represents a vast improvement over the audio available on prior DVD editions, particularly presenting the film’s distinctive synth score (co-authored by John Carpenter) with a good degree of detail and resonance.

The commentary with Tommy Lee Wallace features Shawn Clark from Horror Hound magazine, who asks the director a variety of nerd-centric questions regarding locations, casting trivia, and plot details that lead to anecdotes that paint a general portrait of the film’s making. Wallace is soft-spoken and quick to give credit to others when due, such as disclosing that Quatermass creator Nigel Kneale wrote probably 60% of the script uncredited. The commentary with Tom Atkins covers similar ground, but is worth hearing for the actor’s humor and storytelling zest. “Stand Alone: The Making of Halloween III: Season of the Witch” is an entertaining collection of contemporary reminiscences of making the movie that’s characterized by a clear self-consciousness, as everyone involved appears to still be disappointed that the film initially went over so poorly. “Horror’s Hallowed Grounds: The Locations of Halloween III” provides a fitfully amusing tour of the film’s shooting locations. A stills gallery, radio and TV spots, and various trailers round out the package. All in all, an affectionately detailed collection of extras that should please fans.

The redheaded stepchild of the Halloween franchise finally gets its day in the sun with this affectionate, fanboy-friendly Blu-ray presentation.

Review: Drew Goddard’s The Cabin in the Woods on Lionsgate Blu-ray