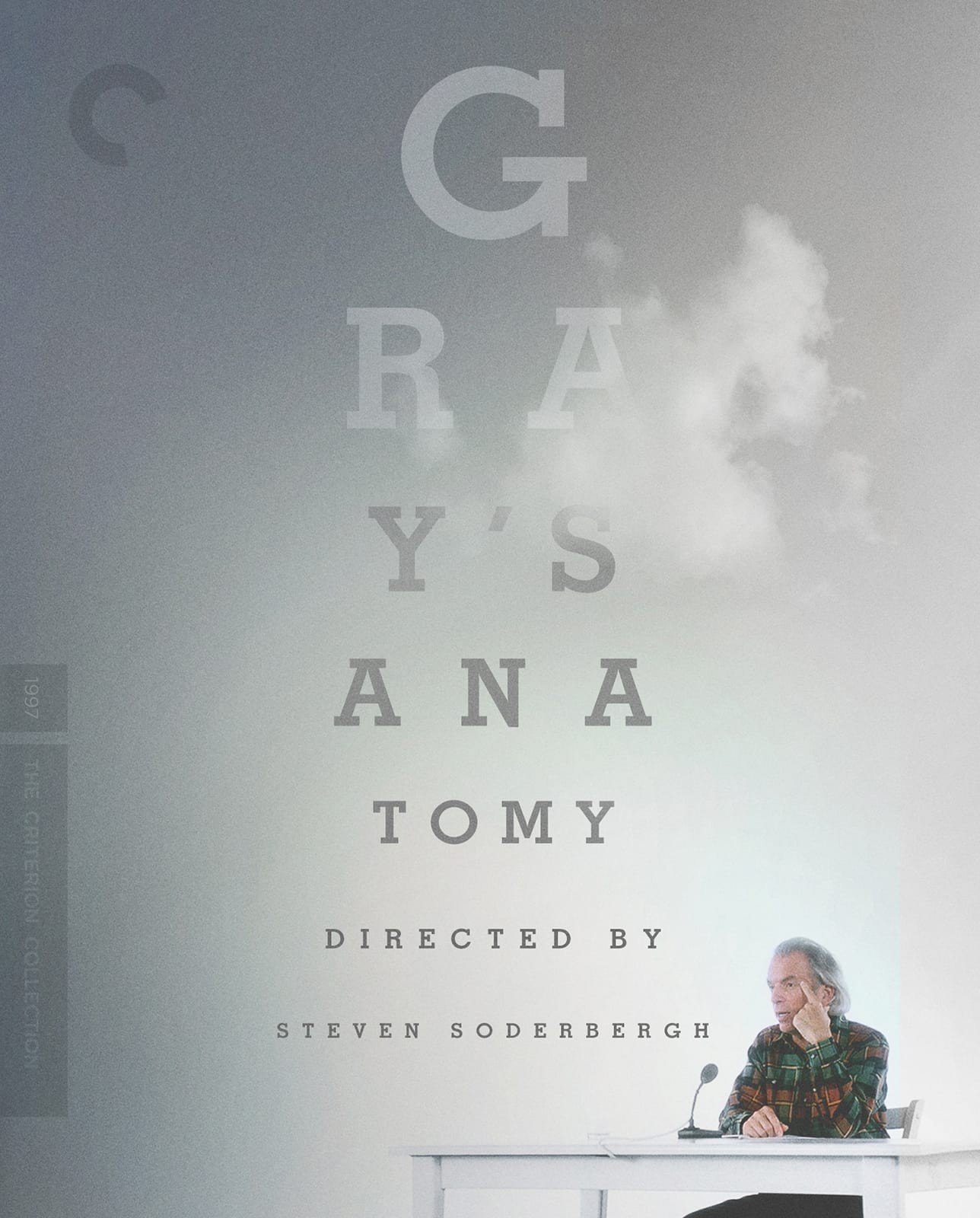 The last of Spalding Gray’s manic-pathetic monologues to be filmed, Gray’s Anatomy is also the weakest, marred by the actor’s oddly becalmed-to-the-point-of-lifeless delivery and by director Steven Soderbergh’s stylistic intrusions. For much of the film, Gray is seated not at his trademark desk, but within a set that comments on or illustrates his verbiage; when he discusses a trip to his ophthalmologist, a phoropter swings down from the ceiling. Soderbergh also sprinkles the running time with anonymous talking heads who describe unusual ocular injuries, none of which mesh with Gray’s exasperated experiences. These formal decisions arguably drag the monologue kicking and screaming from the stage into cinema, but the transition, in hindsight, could have been better managed with less force.

It’s tempting to simply ignore Soderbergh’s contributions and concentrate on the storyteller at the center of all this artifice, but this selective approach would hardly eradicate all of the film’s shortcomings. Gray’s rhythmic, self-effacing patter had by 1997 hardened into staid convention, and the focus on health further imbues Gray’s Anatomy with a sobriety that verges on solemnity. Bouncing off the illness-narrative tradition, Gray’s Anatomy concerns its progenitor’s macular pucker, a retina condition for which he seeks out alternative medicine before finally capitulating and undergoing surgery; the stories are thus able to span the globe without straying from Gray’s nervously existential mindset. As with all of his monologues, there are mentions of his suicidal mother and his Christian Science upbringing, but events that would have once been chained together with tangential aplomb, as they are in Monster in a Box, are presented as uniform proof of Gray’s cosmic prejudices. Gray describes participating in an Indian spiritual ritual, undergoing psychic surgery, and sweeping the steps of a synagogue in NYC, but all these colorful roads lead back to the meaningless bifurcation of the human condition into agony and ecstasy.

Gray’s Anatomy is easy to dislike, then, because it’s so curmudgeonly tidy; emboldened by bodily malfunction, Gray’s cynicism runs amok with confidence that flattens his demeanor along with the movie’s dynamic. Compare his performance here with the one in A Personal History of the American Theater (included as a bonus on this Blu-ray release), wherein for over an hour Gray non-chronologically riffs on his illustrious stage career for a small group of patrons. Videotaped in the early ‘80s, the piece is everything Gray’s Anatomy isn’t: raucous, smug, unpolished, and hypnotic. Gray stammers through half of his stories about backstage trysts and drug use, awkwardly cushioning clauses with embarrassed hemming and hawing, and yet the steady cadence achieved suggests complete authorial control. (Gray understood the self as the ultimate unreliable narrator.) One wouldn’t wish these purposeful amateurisms upon his later work, but juxtaposing them with Gray’s Anatomy reveals the film’s primary problem: the lack of a live audience.

Gray’s artistry is steeped in vanity; his most impressive moments are also his most obviously ingratiating. Gray’s Anatomy features a few of these, likely preserved from the monologue’s original staging in Arizona, and they make the entire film worthwhile. He pauses once from a lengthy parenthetical to admit: “I’m just trying to tell you about this woman.” These simple words cradle a ponderous honesty; they confess the gnawing imprecision of expression, one that’s less perturbing in mere conversation, where the stakes are lower. The difference between “telling” and “trying to tell,” then, might very well be the difference between speech and art.

Whatever the inanity of Steven Soderbergh’s visuals here, they’re rendered with marvelous resolution in this high-def transfer. The interviews that pepper the film were shot with ghostly infrared stock; their drained, blocky appearance provides elegant contrast with the flourishes of color that erupt around Spalding Gray. Still, 1080p or no 1080p, you’ll find yourself looking away and wishing that Soderbergh had kept the busy imagery in check. The 5.1 Surround mix allows Gray’s voice to swarm from left to right within your home theater, but it also reveals the many, jarring seams in the sound editing. (The film was stitched together, scene-by-scene, from various takes.)

The most satisfying supplement is the aforementioned bonus monologue; it upstages the feature, in fact. Elsewhere there’s fun video footage of Gray’s eye surgery, and interviews with collaborators Soderbergh and Renee Shafransky—the latter of which provides insights on how the monologue’s content was shaped. (I’m hardly shocked to learn that there are fictional elements.) Amy Taubin, who by coincidence also suffers from macular pucker, wrote the softball essay in the disc’s booklet.

Though a lousy introduction to the late master of spontaneous memoir, Gray’s Anatomy is still more fun than getting an eye exam.