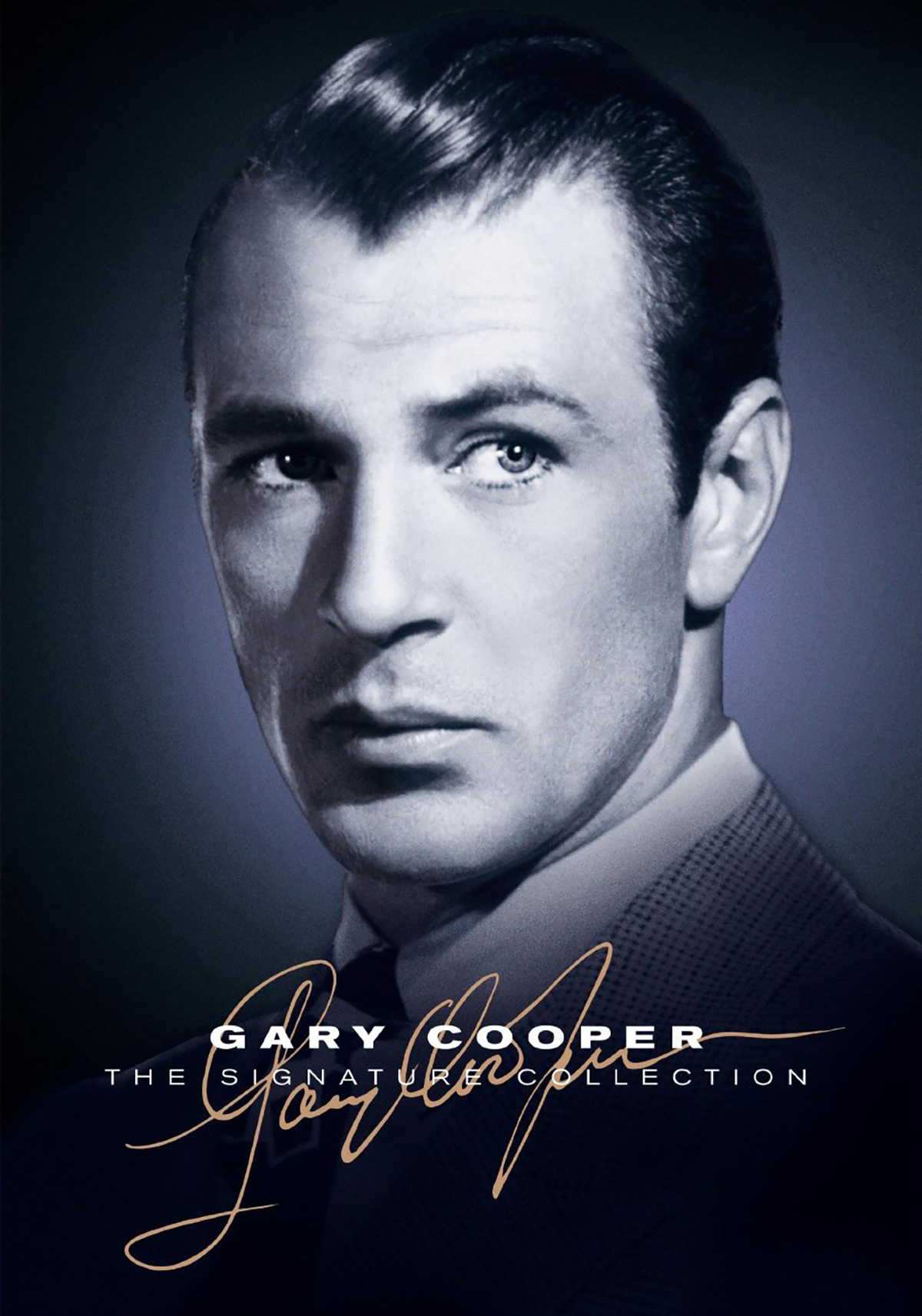 It’s odd and more than a bit perverse to see Gary Cooper, classic Hollywood’s paragon of cowpoke manliness, as the successor of Rudolph Valentino’s swooning Sheik, yet there he was, Ernest Hemingway’s favorite actor placing a rose behind his ear and stealing a smooch from Marlene Dietrich behind a fan in Morocco. Cooper’s as unmistakably American as Dietrich is mysteriously European, yet to Josef Von Sternberg they are equal objects of pansexual exoticism, as well as ravishing camera subjects. Tall and long-limbed, his sleek hair often hidden beneath a cowboy Stetson, the young Cooper is such a stunning vision of male beauty that even a stolid craftsman like Sam Wood could not resist using a POV shot as Ingrid Bergman drinks in the interminable sprawl of the actor’s outstretched legs in Saratoga Trunk. It’s just one step from beauty to narcissism, yet Cooper, like fellow oater staple Joel McCrea, always seemed rather bashful about his own good looks, as if he’d much rather be out hunting with his buddies than doing this odd Hollywood star stuff. Around him, people appear to blabber too much: For a true-blue Westerner who worked from Montana ranch to Tinseltown, a “yup” or a “nope” was more than enough to give audiences a taste of a new brand of laconic stardom.

Examined closely, Cooper’s persona of uncluttered naturalism was actually the result of a series of mannerisms (the flatness of voice, the delayed reactions, the awkward gestures, and the terse walk) so rigorously chosen and maintained that the actor himself once complained of what an arduous job it was for him to be “Gary Cooper” on the screen. But it is amazing how successful he was carrying this persona over the course of a nearly four-decade career, investing character after character with the wry integrity of an experienced sheriff coolly surveying a saloon. Heroism all but emanated from Cooper’s handsomeness, whether playing the tuba in Mr. Deeds Goes to Town or nobly accepting death as Lou Gehrig in The Pride of the Yankees, yet few other actors (Jean Gabin? William Holden?) became as interesting as youthful beauty inevitably slipped away and middle-aged apprehension settled in. The gradual shift from the nonchalance of Desire to the worn tension of Man of the West is startling not only because it displays the toll of the actor’s bout with cancer, but also because it exposes the anxieties that may always have been eating away at Cooper, kept hidden under buckskins and deceptively effortless, tight-lipped casualness.

Sergeant York, the earliest film in the Gary Cooper: Signature Collection set, marked the third time Cooper worked with Howard Hawks, a filmmaker whose own laconic personality gave him a profound understanding of how to maneuver the actor through screen space. A biography of Alvin C. York, the backwoods pacifist whose sharpshooting skills would ironically take him to Germany and fame as a WWI hero, the picture leans on Cooper’s plainspoken quality in its early sequences and on his battlefield gallantry in the later half, supplying a veritable pamphlet of patriotism as the U.S. involvement in WWII drew nearer. That York himself demanded to be played by Cooper attests both to the star’s popularity and to the project’s artistic shortcomings as a dated portrait of propagandistic morality, rigid and preordained where Hawks is usually loose and intuitive. Hawks scores many splendid moments throughout (including an authentically convincing moment of religious enlightenment, always a bitch to convey without making it look laughable), but his Air Force later on is a much more trenchant study of men in war, unclogged by the self-importance that would net the film a busload of Oscar nominations (and Cooper his first Best Actor win).

The Fountainhead comes with an equally prestigious pedigree (an adaptation of Ayn Rand’s highly touted novel), yet King Vidor’s film detonates the author’s windy philosophizing with the filmmaker’s trademark dynamic emotionalism. A taciturn Cooper is audaciously (and hilariously) cast as Howard Roark, Rand’s ambulatory phallic symbol, an idealistic architect who, told that “there’s no room for originality in architecture,” refuses to compromise his impertinently individualist designs and sets himself against a world “perishing from an orgy of self-sacrificing.” Much of the film’s richness and mystery emerges from the clash between Rand’s risible fascism and Vidor’s vision of volcanic forces at play, a collision that mirrors the tempestuous extended dance on screen between Roark and his seething mistress (avid newcomer Patricia Neal). Cooper reportedly never really got what the hell Vidor was going for here, but dutifully lent his physique—as sublimely stretched as the hero’s buildings—to such stunning moments as the heroine’s introductory glimpse of Roark penetrating a block of rock with a whirring drilling tool, or her final view of his crotch as an elevator quickly takes her to the top of his skyscraper. Cultists who derisively label it (and Vidor’s equally outrageous, equally magnificent Beyond the Forest) “camp” are simply uncomfortable with uninhibited filmmaking: The Fountainhead is towering.

The other three films in the set are minor works of Cooper’s later years, not as interesting as Billy Wilder’s blithe cruelty to the actor’s aged visage in Love in the Afternoon or Anthony Mann’s essay in his ingrown violence in the lacerating Man of the West. Dallas is a lesser western than Mann’s, but Stuart Heisler’s use of action moves a clichéd narrative about revenge in post-Civil War Georgia. Better is Andre De Toth’s Springfield Rifle, which, by casting Cooper as a U.S. Army major infiltrating a batch of bloodthirsty Confederates by playing coward, subtly plays with the audience’s preconceived notions of the star’s honorable persona; studded with De Tothian views of violence and betrayal, it is a far richer western—tight, limpid, never condescending to its genre conventions—than Cooper’s tortured, Oscar-winning sheriff stride through High Noon that same year. Out of the sagebrush and into the seas for his penultimate venture, The Wreck of the Mary Deare finds Cooper aboard a freighter drifting boringly in a stormy English Channel. Directed by Michael Anderson without much imagination (just check out how Michael Powell and Emeric Pressburger handled similar material in The Battle of the River Plate to see how dull Anderson is), it is of note mostly for contrasting acting styles between minimalist Cooper and grimacing Charlton Heston. Death was just around the corner, but Cooper was still hanging on to his belief that less was more. Now that’s star quality.

The black-and-white transfers are good, even if the image has been scarcely restored from the prints that usually turn up on Turner Classic Movies; the three color films are impressively sharp, especially Springfield Rifle, which I recall being pretty worn from a previous VHS viewing. (It’s a shame that only The Wreck of the Mary Deare boasts a widescreen presentation.) The sound is clear.

Extras are reserved for the two more notable films. Jeanine Basinger, always a dependable analyzer of classic Hollywood stardom, provides the knowing, engaging commentary for Sergeant York, which also gets two documentaries (one detailing the birth of the film, the other Gary Cooper’s life and legend), a 1941 sports short, and a Warner Bros. cartoon. A brief featurette scrambles to rescue The Fountainhead from the tarpit of camp: it’s informative but dry, and oddly free of interviews. (Wasn’t the still-scrappy Patricia Neal available?) A collection of Gary Cooper trailers rounds things out.

An uneven set illustrates the facets of Cooper’s persona. Worth it for fans? Yup.