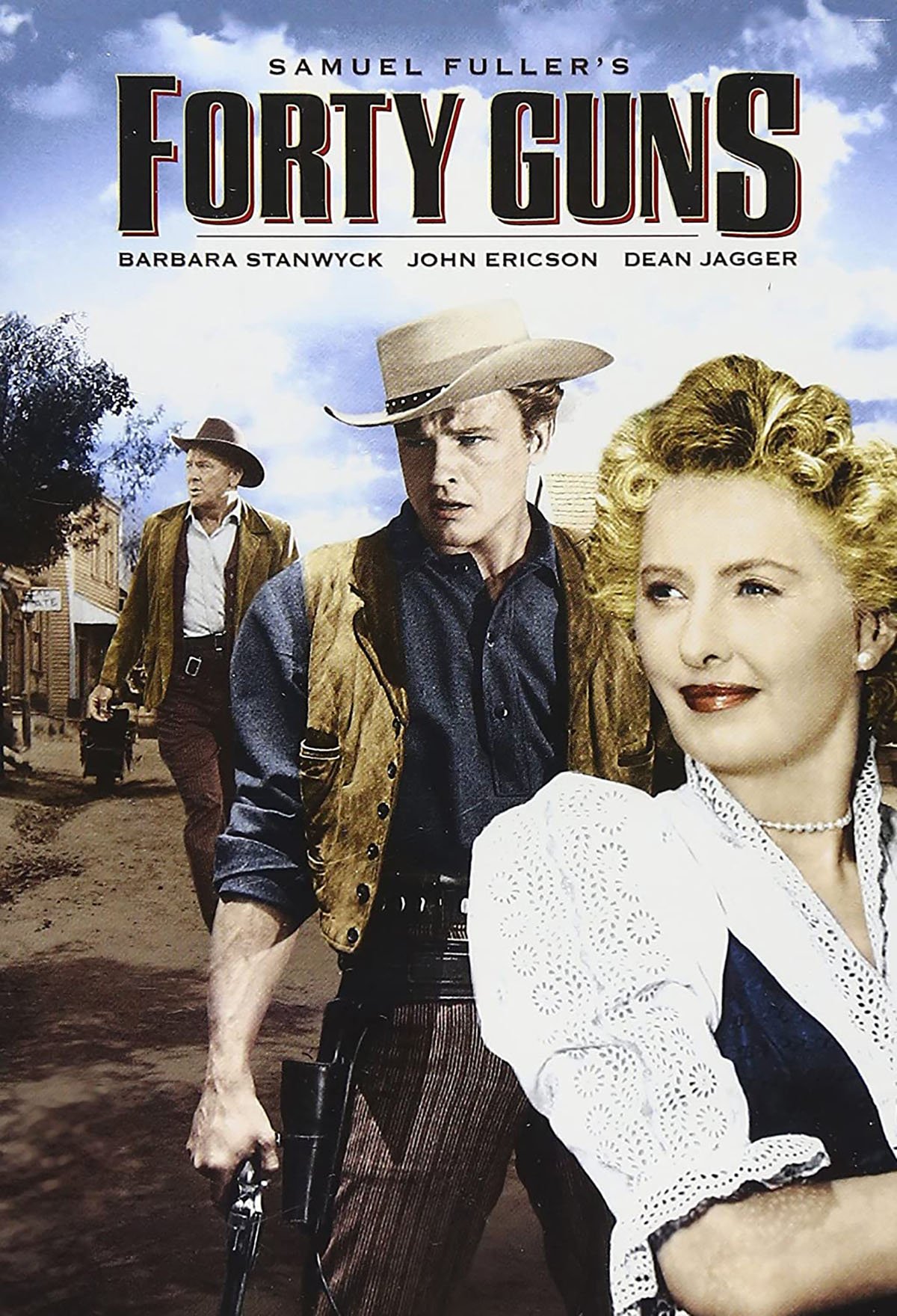 A magnificent B western shot in a little over a week, Forty Guns features Sam Fuller’s punchy combination of crazy vulgarities and keen psychological insights; it’s one of his best films. Jessica Drummond (Barbara Stanwyck), a Catherine the Great of the Arizona range, lords it over her territory with the help of a whip and 40 hired guns. She even has her own theme song, “High Ridin’ Woman,” first sung by Jidge Carroll in a jaw-dropping tracking shot that highlights the artificiality of the song’s pre-recorded playback rather than hiding it (an example of Fuller’s lip-smacking stylization). Jessica intrigues U.S. marshal and former professional killer Griff Bonnell (Barry Sullivan), and she is tickled by him. The balance of power seesaws between them as the body count piles up.

Fuller plants plenty of outrageous sex jokes in the film: when Jessica asks to feel Bonnell’s pistol, he smirks and says, “It might go off in your face.” Jessica smiles back, understanding his meaning perfectly, and says, “I’ll take a chance.” In a moment like this, the bawdiness is enhanced by the actors’ and the director’s enjoyment of how far they’re going, as if they’re saying, “How are we going to get away with this?” Fuller studs the beginning and middle of Forty Guns with such Sirk-ian dirtiness that when he suddenly turns reflective and melancholy, the drastic change in tone strengthens the seriousness he’s after.

Fuller’s Cinemascope frame for Forty Guns is harsh yet poetic, with lots of dissolves and dreamy camera movements that feel quite atypical for him. He utilizes the widescreen frame most strikingly in the film’s finest scene, the moment when it switches gears. Bonnell and Jessica are talking, very quietly, in her parlor, and they are interrupted by gunfire. It turns out that the bullet round came from Ned (Dean Jagger), one of her men. Ned then confesses his love for Jessica in a halting, oblique, very painful way. Fuller isolates the three people in the frame: Bonnell on the left, embarrassed by Ned’s speech; Ned, who stands at the center where he knows he doesn’t belong; and Jessica, who stands to the right, frozen with deep feeling, as she takes in what Ned is saying. Fuller uses Cinemascope here to visually emphasize the chasms between people, and Stanwyck helps him enormously as a performer by taking control of the scene with her stillness and gently lifting it up into a heightened realm of emotion. It’s hard to forget the desolate way Ned finally exits the frame, disappearing off to the left into darkness.

The directorial flourishes continue when Jessica’s no-good brother Rocky (John Erickson) shoots Bonnell’s brother on his wedding day. When the groom is hit and his bride grabs a hold of him, Fuller lowers the camera gradually with a few blow-like quick cuts, so that you literally feel as if you are sinking to the ground with the couple. When Jessica is losing her power, Fuller dissolves on a still photo of her image and keeps it there as horses ride across the range over her face, a powerful metaphor for her impending loss.

Stanwyck, by turns imperious and sly, dominates the movie. She did her own stunts, including a dangerous scene where her foot is caught in a stirrup and her horse drags her across the screen. Her physicality is impressive, but her emotional depth is even more so. Fuller, like so many great directors before him, knows how to use Stanwyck’s mastery to his advantage; the shift into melancholy he contrives toward the end would never have worked, or worked so well, with any other actress. When Bonnell says to Jessica, “You look upset,” she howls, “I was born upset!” This iconic line of dialogue defines both Fuller and Stanwyck and the masterpiece they made together.

The image quality, alas, is poor: blacks bleed all over the place, and the whites are washed out. Sound varies enormously, too, with generally muffled dialogue and tinny music.

The original theatrical trailer and a full-screen version of the film for those not in their right minds.

A shoddy presentation of a great film.