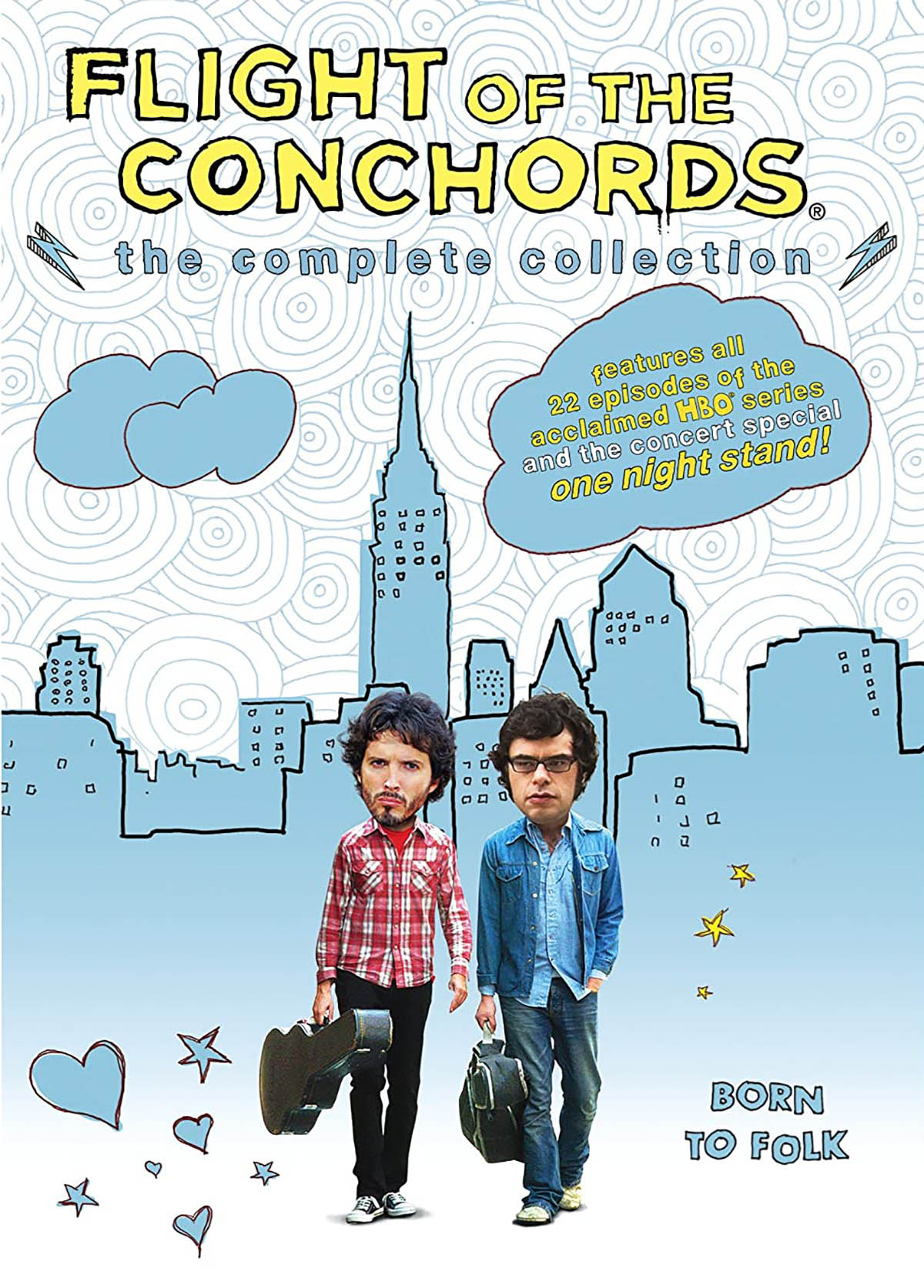 If anyone ever struggled to find a working definition of what a hipster is (and it appears that some people recently have), all they need do is watch Flight of the Conchords to see what they look like—as represented in pop art, that is. Jemaine and Bret (Jemaine Clement and Bret McKenzie) are twentysomething struggling musicians living in Chinatown. They are representative of an overexposed new breed of bohemian artists: Jemaine wears jean jackets and plastic-rimmed glasses while Bret has a rotating wardrobe of truck-stop couture, like sweatshirt pullovers with pictures of tigers or slogans like “Buck Country” on them. Most importantly, though they are both knowingly effete, and accordingly always singing about their skittish advances toward the opposite sex, they are rarely without female companionship (in the song “Carol Brown,” Jemaine is taken by surprise when a dozen of his exes form a choir and sing out his many shortcomings as a boyfriend). This last point makes Jemaine and Bret the post-adolescent equivalent of that nerd you knew back in high school that always complained about how unprepared they are for tests and yet always pulled through with A’s and B-plus’s.

College-age viewers watching the show could relate to Jemaine and Bret—the embarrassing calls from their respective mothers, the drive to be taken seriously by an uncaring world (their group only has one fan and she’s a stalker) and the frantic need to meet the month’s rent that is most succinctly spoofed in the Auto-Tuned rap song “Inner City Pressure.” They also certainly didn’t want to graduate to become them. Bret and Jemaine are unmotivated, unskilled slackers with one-track minds: Most episodes consist of impromptu band meetings with incompetent manager Murray (Rhys Darby), half-assed attempts to get girls, and underwhelming gigs during which Jemaine and Bret play the same two songs over and over again. That vicious cycle of inconsequential misery complements the show’s sitcom format, especially as it’s characterized by catch phrases and song cues.

The main hitch with both Clement and McKenzie’s comedy and the narratives they gave their on-screen counterparts is that both are far too precious and too self-conscious to endure beyond a few half-hearted chuckles. Most of Flight of the Conchords’s jokes revolve around an unambitious, self-deprecating sense of humor that largely only works when it’s contained within a song. The rest of the time you’re stuck watching two guys nervously insist that they won’t put out for girls (until they do—repeatedly), drink water instead of alcohol, never curse, and are routinely confused with Australians. The best episode in the series is not surprisingly the one where Jemaine’s one-night stand turns out to be everything he and Bret are not—an oblivious Australian tomgirl that gets laid regularly and has beer cans and pizza boxes strewn about her apartment (I love when she grosses both Bret and Murray out by telling them that she’s “going to the dunny” to “murder a brown snake”).

The world Bret and Jemaine live in is so cushy and poorly constructed that even the tunes that Clement and McKenzie created for the short-lived series are often strained in their humor, monotonous and over-eager to please. Riffs on “What’s Going On?,” “Total Eclipse of the Heart,” “Piano Man,” and more tell us nothing about who Jemaine and Bret are apart from the fact that they listen to pop music and, being callow young things with something to prove, can sing about it (“My Sugar Lumps,” a parody of Fergie’s “My Humps,” is especially uninspired). The show’s musical numbers rarely soar off into flights of unfettered fancy: Two superior music video skits are “What You’re Into,” a ballad that devolves into an offer to have a threesome, and “Doggie Bounce,” the bizarre hit single of a canine-obsessed rival music duo, composed of a keytarist and a bongo player. These exceptional musical numbers aren’t any less brittle than the majority of uneven ones, but they are at least rude enough to be memorably funny.

HBO presents the show as it was shot in its original 16:9 widescreen format for season one, but as the show visually takes after Michel Gondry’s floating style of grainy hand-held photography, that framing doesn’t really accentuate its humdrum mise-en-scène (incidentally, Gondry directed the episode “Unnatural Love”). The show’s aesthetic is quasi-vérité, shot on the street and in apartment buildings and recorded with boom mics; even the music video numbers are clearly shot on digital cameras. Thankfully, that style is never really overwhelming. The dialogue tracks on the DVDs are crisp, as is the video presentation, though one shouldn’t expect anything beyond a homely but satisfying AV palette.

The bulk of the extras on this Flight of the Conchords: The Complete Collection box set are culled from the supplemental materials that appeared on the show’s season two DVD editions (note: season one never had any special features). The behind-the-scenes documentary feature is your typical extended series promo for the show and the outtakes reel isn’t as funny as it should be. The Easter egg on season two’s special features, as well as fake TV ads for Dave’s Pawns Shop, Bret and Jemaine’s frequent hangout, are both short and sweet.

The only new feature exclusive to this box set is an episode of One Night Stand, HBO’s half-hour showcase for stand-up comedians. In 2005, One Night Stand introduced HBO viewers to Bret and Jemaine. Hearing people respond to the jokes greatly enhances the seeming spontaneity of the characters’ fumbling personas. Bret and Jemaine have greater chemistry when they’re limited to a half-hour live set as opposed to a half-hour sitcom narrative, which forces them to stretch their already thin material past its breaking point. I suspect this is why the pair didn’t know whether or not they wanted to do a second season of the show: they just didn’t have enough material.

You don’t really need to buy the complete DVD set of Flight of the Conchords as long as YouTube’s still working.

Review: Bruce Robinson’s Withnail and I on Image Entertainment Blu-ray