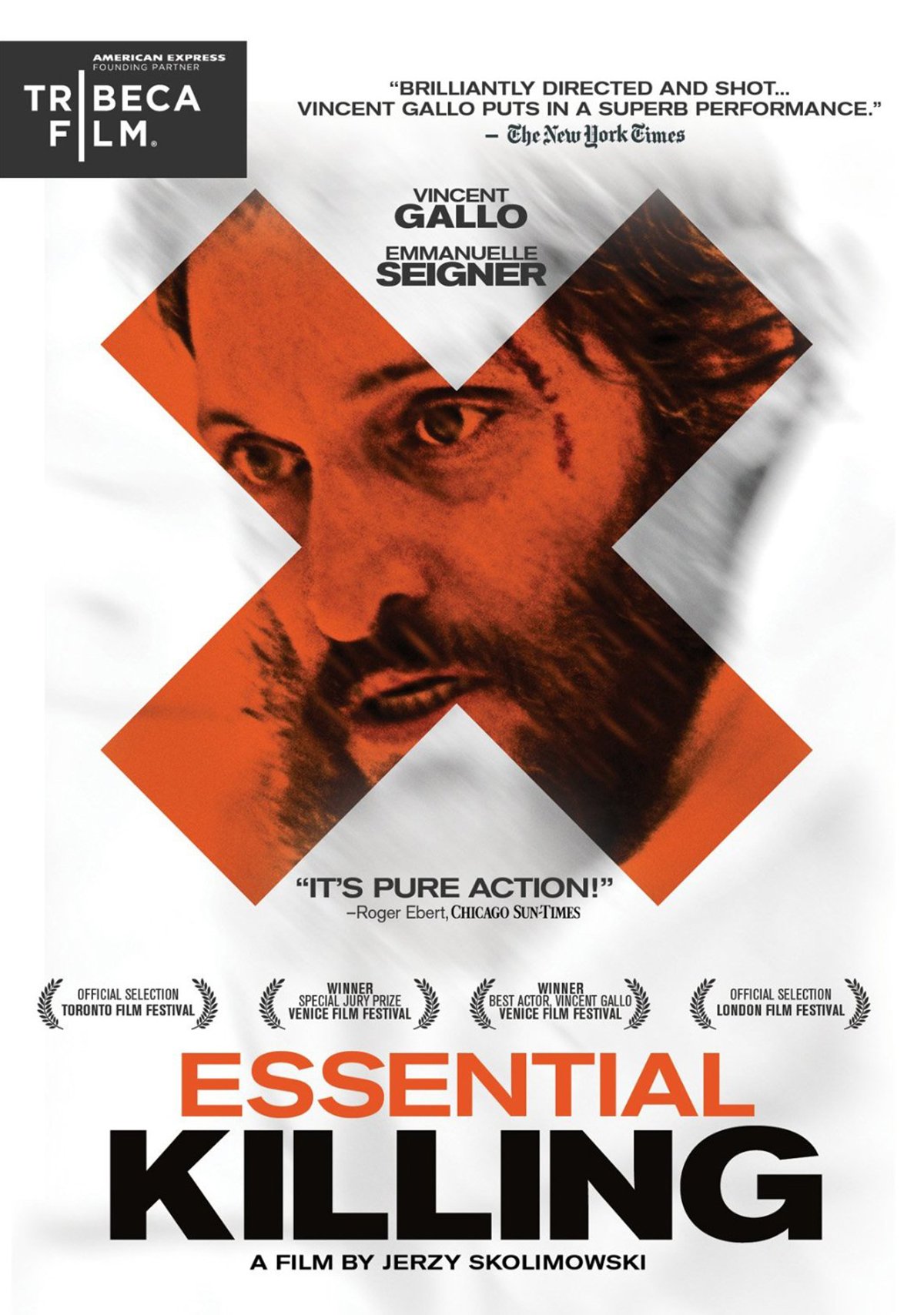 Although Essential Killing bears a passing conceptual resemblance to last year’s Hanna, as both films focus on a lone protagonist traversing inhospitable terrain while fleeing military pursuit, Jerzy Skolimowski’s film is worlds apart from Joe Wright’s hyperkinetic, music-video aesthetic. Skolimowski prefers detached austerity, utilizing a starkly expressionistic mise-en-scène that imperceptibly blurs the line between the natural world and its nameless protagonist’s (Vincent Gallo) disordered mindscape. (Only in the end credits is the character given the generic sobriquet Mohammed.) Like Hanna, Essential Killing is at bottom a fable, but where Hanna posits maturation as a function of exorcizing the Bad Mother, Essential Killing charts the less uplifting saga of man’s degeneration into little more than an animal.

With an eye for the metaphorical heft of its scenery, Essential Killing moves from one wasteland to another, opening amid serpentine desert ravines where a cornered and clearly frightened Mohammed takes out a couple of civilian contractors (depicted as crass, drug-addled assholes) and their military escort with an RPG, before being pursued and captured via helicopter. The scene then shifts, after a brief layover in a C.I.A. rendition center where a noncompliant Mohammed is beaten and tortured, to the wintry wilderness of rural Poland, the locale evident only when some of the sparse local populace open their mouths. (Echoing Mohammed’s intensifying sense of displacement, none of the foreign dialogue is subtitled.) Following an accident that sets him free, Mohammed is thrown upon his own resources to evade recapture, as well as to survive harsh weather and lack of food. In the end, he’s reduced to gnawing on tree bark and, in the film’s sole moment of black comedy, waylaying a woman to suckle at her teat, a remarkable sight you’re not likely to encounter elsewhere in cinema this year. (Or, I would hope, anywhere else…)

From this cursory synopsis, as well as the entirely open question as to which of the film’s many killings rightly can be called essential (let alone justified), it should be apparent that Skolimowski is flirting with all kinds of loaded political subtext. Thing is, given the terse, even elliptical economy of its narrative, Essential Killing can’t be said to propose much of anything. Specificity of visual and sound design combines with an everywhere-and-nowhere ambiguity to lend the film an off-kilter storybook universality. Essential Killing doesn’t progress so much as simply unfold. Any lingering traces of suspense are undercut by fleeting flash-forwards to Mohammed’s ultimate fate; just as a series of what are presumably flashbacks showing a woman clad in a blue shawl with an infant in her arms, which might in a lesser film have served to “explain” Mohammed’s actions, are left ultimately unresolved. These images, in turn, ingratiate themselves into his environment, as when he momentarily glimpses the woman behind him, or watches unfazed as the icy current bears away her blue shawl. Eating a bunch of berries, possibly poisonous, brings on a deliriously hallucinatory sequence in which a guide dog seemingly turns into an entire pack, bounding and barking in tandem around Mohammed’s prone figure. Gallo delivers a remarkable performance throughout, unencumbered by a single line of dialogue, and entirely dependent on the nuanced expressivity of body language and gesture, as well as his harried, haggard visage.

Late in the film, Mohammed stumbles upon an isolated homestead, where a woman (Roman Polanski muse Emmanuelle Seigner) gives him temporary shelter and tends to his wounds before sending him on his way atop a thoroughly symbolic white horse. Seigner’s presence points to the fact that Skolomowski, who co-wrote Knife in the Water with Polanski, displays similarities in sensibility, a penchant not only for exteriorizing internal states, but also for illuminating the darkest psychological explorations with flashes of absurd surrealism. While Carnage limits its action almost entirely to one rigorously delineated domestic space, as opposed to the seemingly limitless vistas of Essential Killing’s natural habitat, the two films are linked by a palpable sense of confinement, indeed imprisonment. In Essential Killing, the crime is capital and the punishment is condign: Absent of any human element, the film’s final image of a grazing horse concretizes a haunting vision of Mohammed’s (read: Everyman’s) death, juxtaposing animal existence against impassive expanses of vapid blue sky and barren featureless terrain.

New Video’s DVD transfer raises few technical complaints, except for some slight black crush evident during nighttime scenes. Otherwise the image nicely renders the dun browns of the opening desert scenes, the bright oranges of prisoners’ uniforms, and the glaring whites of its snow-blanketed landscapes. The disc provides two audio tracks: 5.1 surround and stereo. The surround track separates and spreads around the helicopter action early in the film, ambient natural sounds, and Pavel Mykietyn’s minimalist score.

The lone extra here is a slight but welcome interview (in English) with writer-director Jerzy Skolimowski. Skolimowski discusses getting the idea for the film after he almost wrecked his car on an icy stretch of road near his home; pitching his script to Vincent Gallo after the premiere of Francis Ford Coppola’s Tetro at the Cannes Festival; why Gallo thought he was ideal for the role, having grown up in Buffalo under similar Arctic conditions; as well as the logistical difficulties presented by shooting under such circumstances.

Stark and stripped-down, Jerzy Skolomowski’s Essential Killing is a fatalistic fable eschewing the political in favor of the existential, now available in a fittingly barebones DVD package from New Video.