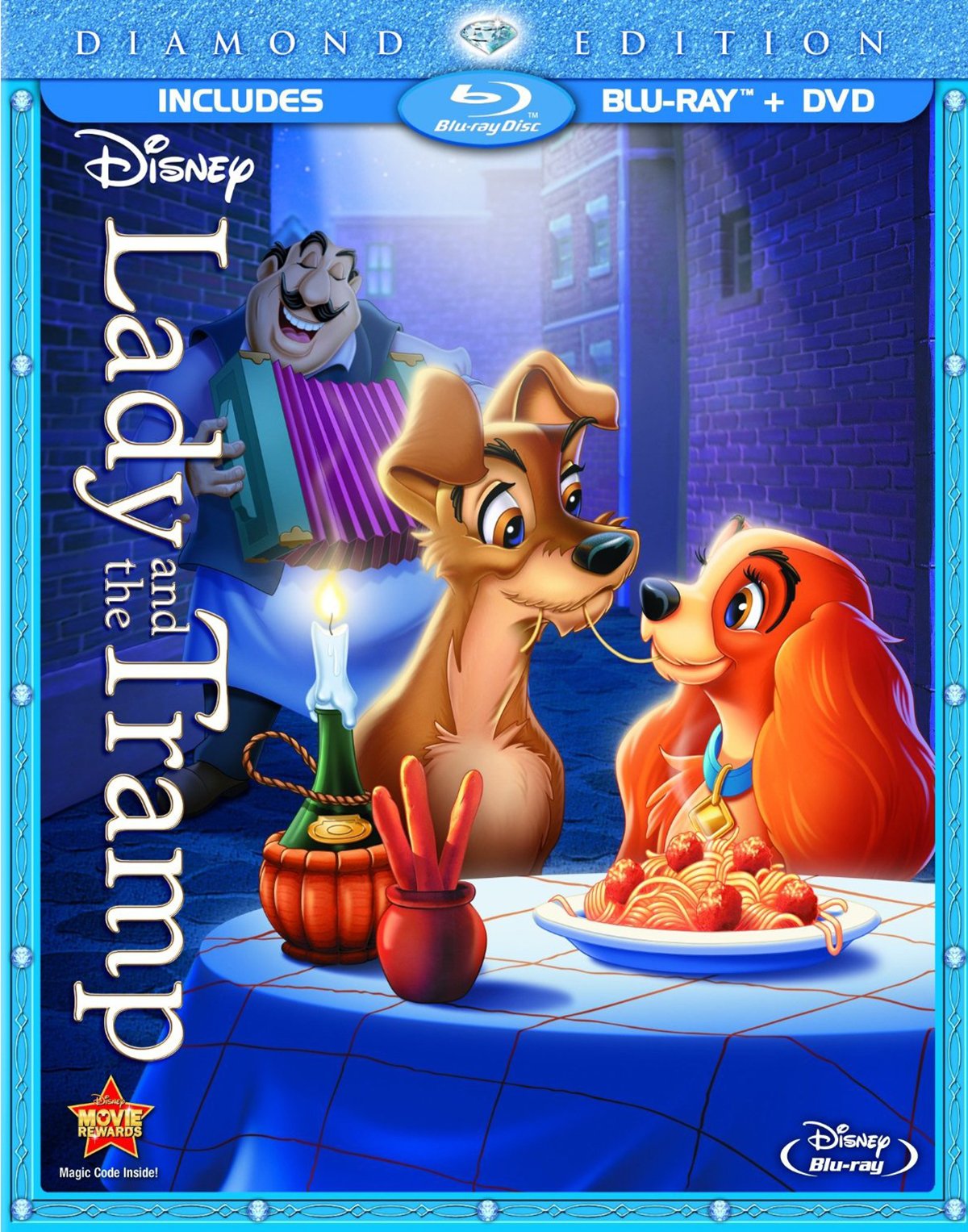 Even for a company that successfully, even famously, made the romance of a hulking sharp-toothed beast and a comely housemaid feel old-fashioned, Lady and the Tramp is a stunningly white-bread affair. The main character, the titular female canine, based on story-man Joe Grant’s own pet cocker spaniel, is the most prominent and beloved pet of an upper-middle-class family in a small suburban town, but the pup might as well be the lady of the house’s spinster co-worker, left stressed and uncertain when the lady of the house is suddenly in the family way and she no longer is a major beneficiary of her attention.

A soft metaphor for the wild instincts of loners being measured, pared down, and curtailed in return for companionship, love and the (apparently uncomplicated) joys of family, this tale of puppy love is a particularly simple entry in the Disney canon, taking a great deal of pleasure in detailing the day-to-day life of suburbia’s favorite mongrels. As Lady (Barbara Luddy) feels more alienated from her owners, whose aunt’s Siamese cats offer that quasi-racist component that can be found in more than a few early Disney flicks, she becomes more involved with not only the dogs in her affluent neighborhood, chiefly a Scottish terrier named Jock (Bill Thompson) and Trusty (Bill Baucom), an aged bloodhound, but with Tramp (Larry Roberts), an abandoned, good-hearted mutt who lives off the kindness of local chefs, businesses, and citizens.

Yes, the scene with the plate of spaghetti and meatballs is still a winner, and overall, Lady and the Tramp remains nothing less than a visually inviting entertainment, but it doesn’t offer much more. Even when put up against Snow White and the Seven Dwarves, the drama and comedy of Lady and the Tramp, which has three uncredited scripters on top of the five that appear on screen, is thin on substance and detail, and more cute or amusing than genuinely funny. Though opening on a quotation reiterating how money can’t buy happiness, the importance given to clear markings of wealth and ownership, and, more overtly, monogamy are so boldfaced in the narrative as to override any paltry sense of nuanced character in the eponymous protagonists.

Directed by Clyde Geronimi, Wilfred Jackson, and Hamilton Luske, the film seems unable or, perhaps more accurately, unwilling to fully depict the world around Lady and Tramp. The best moments, in fact, are those where the main characters are put in others’ shoes: a trip to the zoo full of cynical hyenas, menacing alligators, and a hesitantly helpful beaver; an imprisoned Lhasa Apso, voiced by Peggy Lee, singing “He’s a Tramp”; a misfit dog’s walk down the pound corridor toward its’ impending demise. There’s also a great exchange, in which both Trusty and Jock offer to bring Lady into their homes, which is, at the very least, reminiscent of Ernst Lubitsch’s Trouble in Paradise.

Sadly, for all its breezy charm, Lady and the Tramp proves to be the acme of what makes Disney so easy to deride, though the film does presage the company’s now near-absurdist practice of oversaturated product placement. All those animals, caged and mischievous and glorious in their varying attitudes, are essentially nothing more than warning signs and cautionary tales to ensure that Tramp will change his ways and Lady will momentarily learn how the other side lives. Affluence is tantamount to holiness, and the nuclear family is reaffirmed and duplicated by the film’s end. The homeless misfits are left for dead and the lovable elderly are suddenly resurrected, all by the grace of Papa Disney and his legions of animators and storytellers—a benevolent God reassuring his privileged flock that all is good and everything is possible, as long as you fit in.

When it comes to Blu-ray quality, you simply can’t argue with Disney, which has the money to give its entire catalog the royal treatment. Lady and the Tramp is no exception: The colors are dazzling but are kept at a perfect pitch, evading that burn-the-retinas look that you might get on a more glossy picture. What is even more remarkable is how the sense of physical work that went into each frame is retained: The work of the restorers never outweighs the beautiful work of the original animators. Black levels are lovely and rich, contrast is very strong, and detailing is superb. The audio, though not all that dense, sounds great. Both the 7.1 and the 3.0 are knockouts, though there’s a certain nostalgia that’s felt when listening to the simpler 3.0. In either case, dialogue is crisply pronounced out front, while effects and music are perfectly balanced behind it. I can’t imagine this movie sounding or looking better.

Here’s a situation where our cup runeth over. There are about 90 minutes’ worth of featurettes, and though they’re all interesting, anyone who isn’t an animation enthusiast will likely need no more than the seven-part making-of featurettes, which clock in north of 50 minutes. Still, the prize here is the audio commentary, which employs a series of voice actors to bring the transcripts of the film’s story meetings to life. It’s an involving, intermittently informative listen and, by itself, is a far more worthy extra than the Second Screen Feature, which is pestering to say the least. The deleted scenes are fun enough, as is a never-released recorded song meant to explain Tramp’s life philosophy. The bits on the storyboarding process are interesting but hardly deserve as much time as they’re given. Trailers, a music video, and excerpts from Disneyland TV are also included.

The release of Lady and the Tramp on Blu-ray is proof positive that the visual joys of the films of Disney’s salad days will always outweigh the thinness of their narratives, even at their most bland.