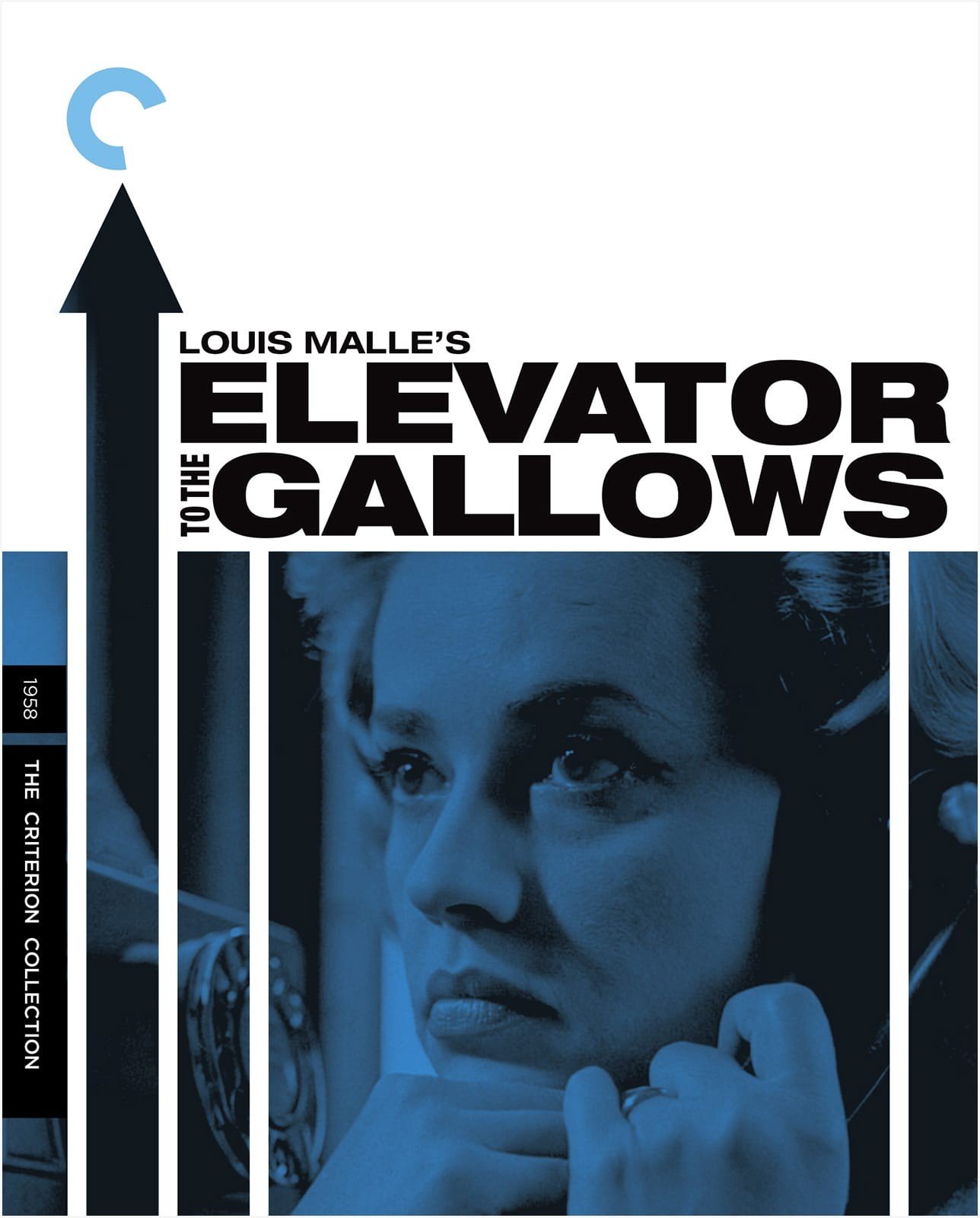 Twenty-four years old when he co-wrote and directed Elevator to the Gallows, Louis Malle appeared to be torn between a hyper-controlled aesthetic that’s reminiscent of artists like Alfred Hitchcock, and an open and chaotic kind of drama that anticipates the concerns of Malle’s later films. The characters are components of a formal and political schematic rather than living and breathing creations, though Malle also captures Paris with a docudramatic volatility that hints at the greater films that would follow from him and the blossoming French New Wave.

The film ingeniously, sometimes laboriously, blends together three crime stories. Julien (Maurice Ronet) is a French veteran of the Indochina and Algerian wars who’s working for an influential arms dealer, Simon Carala (Jean Wall). Julien is having an affair with Simon’s young wife, Florence (Jeanne Moreau), and they’ve concocted a scheme in which he will kill Simon and fake a suicide. Simon executes the plan but forgets a crucial piece of evidence, which he can see from the flower shop across the street. Returning to the scene of the crime to cover his tracks, Julien becomes stuck in the elevator when the power’s shut down for the weekend. Meanwhile, a flower shop girl, Véronique (Yori Bertin), steals Julien’s car with her boyfriend, Louis (Georges Poujouly), roaring through the country on a crime spree in Julien’s name, while Florence desperately searches Paris for her vanished lover.

Julien’s entrapment in the elevator is a Hitchcockian flourish, a delicious twist of fate that essentially cuts Julien out of his own story while giving him a symbolic preview of the prison sentence his murder has earned him. Some of the film’s most evocative images see Julien sitting in the elevator smoking cigarette after cigarette while trying to concoct an escape plan. Malle lingers on physical details with a painstaking intimacy that recalls the films of Robert Bresson. Julien’s refusal to panic is distinguished, and one assumes that he’s relying on resolve that must’ve been necessary in his years of combat. Elevator to the Gallows abounds in these sorts of reverberations. It’s clear, for instance, that Julien killed Simon, not only so he could have Florence, but out of revenge for the man’s profiteering from wars that continue to haunt France.

A bitterness with war and governmental hypocrisy influences Véronique and Louis’s story as well, as Louis is a callow youth who sounds off impulsively on his country’s violent legacy, though he knows little about what he speaks. Nowadays, it’s impossible to watch Véronique and Louis’s doomed rebellion and not think of Jean-Luc Godard’s Breathless. Godard fetishized youthful self-intoxication as a rebuttal to the self-absorption of a government wracked by upheaval—refining a more self-conscious (and marketable) form of hypocrisy in the process. By contrast, Malle prefers Julien and Florence to Louis and Véronique, as the former have at least earned their disenchantment—and, implicitly, even their immoral trespasses—via actual life experience, while the younger couple is frequently made sport of, leading to violence that’s shocking and as wasteful of human life as anything Louis thinks he’s protesting. This commendably unfashionable perspective offers a glimpse of the challenging empathy that would guide Malle’s career.

Elevator to the Gallows is legendary, however, for Moreau’s star-making performance and the soundtrack by Miles Davis. The film’s most intoxicating sequences follow Florence as she wanders Paris at night while Davis’s score—a pivotal precursor to his iconic Kind of Blue—stretches notes out into sonorous infinity, fashioning a sonic parallel to Moreau’s halting yet sensual stride. Bathed in bright light that punctuates deep darkness, these sequences refined a kind of existentialist cool—bridging French and American pop cultures—which Godard would soon whip up to a new dizzying extremis. When Moreau sighs in close-ups that bookend Elevator to the Gallows, she expresses orgasmic longing and cultural disenchantment, encapsulating the entire mythos of the French New Wave in a few erotically galvanizing gestures.

As the disc’s liner notes observe, blemishes have been removed from this transfer’s image, offering a discernable improvement over the original Criterion DVD. But said image is also vital for its very lack of perfection, abounding in poetic bursts of bright white light that flirt with shrillness, exposing the pores of the actors’ faces. Grain remains in certain sections of the film, but it’s also attractive and evocative. Blacks are conventionally gorgeous, however, suggesting a depth that exceeds the limitations of the frame. The transfer confidently juggles these various textures, offering a beautiful and detailed presentation, which includes a vibrant and subtle monaural soundtrack that allows Miles Davis’s score to really sing, particularly his trumpet, while preserving the tactile intensity of the small diegetic sounds that punctuate the film’s large pockets of silence.

The best supplements here, particularly for jazz acolytes, are devoted to Miles Davis’s extraordinary and incalculably influential film score. Footage from Davis’s recording session, supervised by Louis Malle, is disappointingly brief. One longs for a full-length documentary composed solely of this material, though this featurette still includes wonderful images of Davis standing with his trumpet, playing his instrument while Elevator to the Gallows unspools on a screen in front of him. An archive interview with original soundtrack pianist René Urtreger elaborates on how Davis was recruited to join the film, as he was drawn to Europe out of disenchantment with his sound as well as with American snobbery and racism. Even better, though, are the interviews from 2005 with jazz trumpeter Jon Faddis and critic Gary Giddins. These men accomplish a difficult feat, explaining jazz to those who’re unfamiliar with the form, vividly revealing how the Elevator to the Gallows soundtrack led Davis to a modal kind of music that would dramatically alter his art and take him into even more figurative and daring terrain than before.

A variety of other archive interviews are interesting for posterity, though often repetitive of one another. The best of these pieces features Malle discussing the themes and intentions of the film at length. The 2005 interview with Jean Moreau, and the short archive interview with actor Maurice Ronet, are fine but inessential. The same goes with Malle’s student film Crazeologie featuring Charlie Parker’s song of the same name. The short is of great historic interest but of limited value as actual entertainment. It’s nice to have all these items together, though a contemporary piece would’ve been welcome. Trailers and a booklet featuring an essay by critic Terrence Rafferty, an interview with Malle, and a tribute by film producer Vincent Malle round out the package.

This beautiful little noir unites French cinema and American genre films and jazz in a fashion that would send shock waves through multiple mediums for decades to come.

Review: Jonathan Demme’s The Silence of the Lambs on Criterion Blu-ray