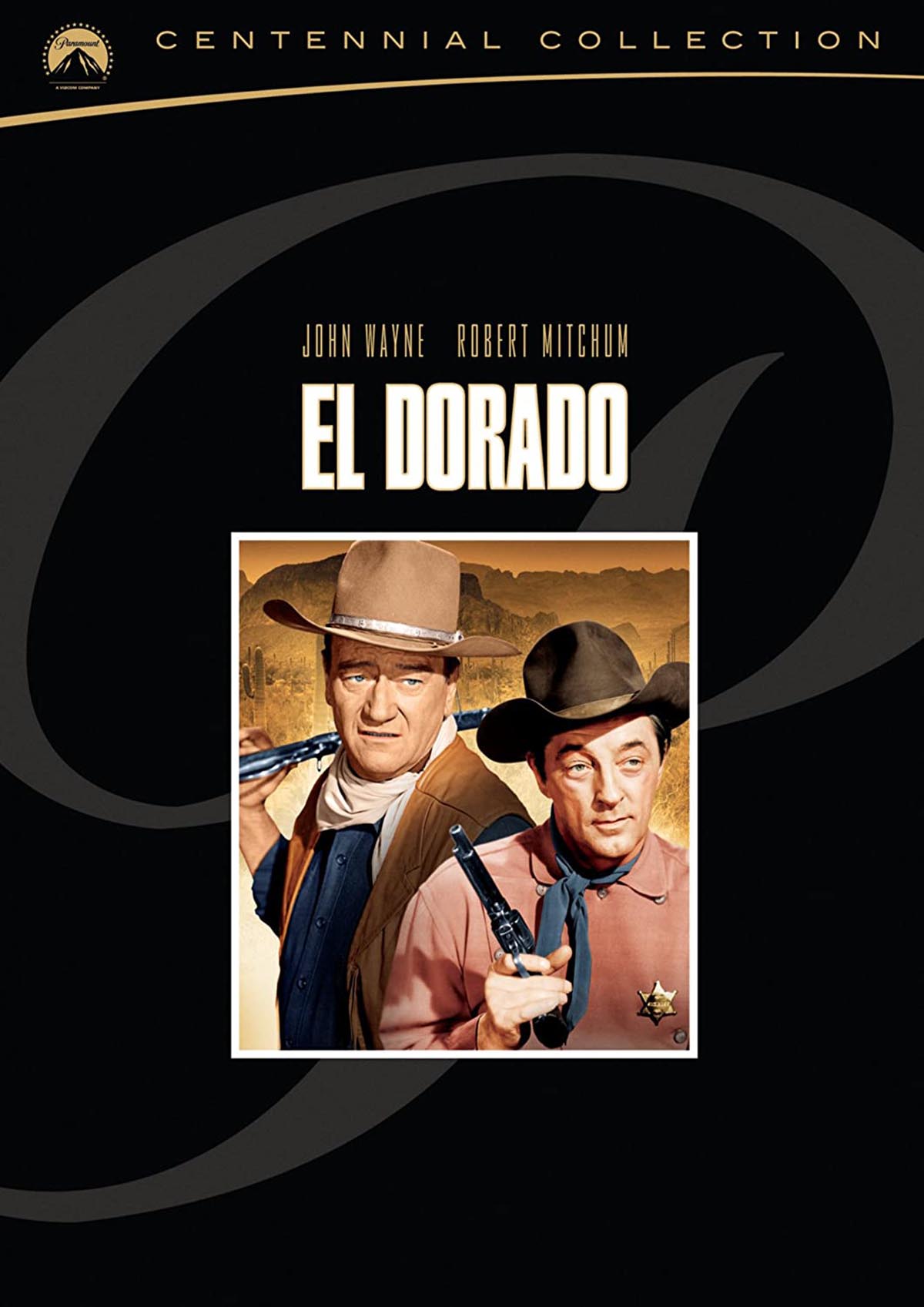 Pangs of déjà vu might strike while watching El Dorado, as it’s a thinly-veiled remake of an earlier John Wayne film directed by Howard Hawks and co-written by Leigh Brackett for Warner Bros., 1959’s Rio Bravo. The film is often considered the second part in a trilogy of films (followed by 1970’s Rio Lobo), but it’s not to be considered a sequel. As in the earlier film, Wayne returns as the star, but in place of Dean Martin is the much more capable Robert Mitchum, and filling in for “Travelin’ Man” teen idol Ricky Nelson (called “Colorado”) is a young James Caan (called “Mississippi”). Both films center on the motley crew of a wounded gunfighter, a drunk, an inexperienced kid, and an old man attempting to protect a small town from a gang of outlaws.

Though the stories are similar, El Dorado feels sharper, bolstered by Harold Rosson’s brilliant photography with scenes seemingly painted on celluloid. While Nelson found occasion to sing a duet about rifles and ponies with Martin in Rio Bravo, thankfully there isn’t so much as a hum from Mitchum or Caan here. El Dorado is also aided by the addition of a gunslinging female lead played by Michele Carey who puts the Duke in his place very early in the film. The interplay between Wayne and Mitchum is terrific, but it’s a shame it takes 50 minutes for their first scenes together. Mitchum’s “tin star with a drunk pinned on it” is played a bit more for laughs here than Martin’s earlier depressed figure and the result is stronger. Caan seems out of his element in a few scenes, but it works well for a character who throws knives instead of drawing a pistol in the old west. Though Hawks isn’t generally known as a director of westerns, he did helm another famous Wayne picture, Red River, and perhaps learned then that letting Wayne swagger his way through a scene is sometimes all the camera needs to do. At the height of his career when this picture was released, Wayne delivers his dialogue in his characteristically understated style, balanced on screen by a snakey Christopher George as the scarred baddy.

Some might say that the world is split into two groups: Rio Bravo fans and El Dorado fans (though perhaps there’s also a third group that mixes the two films up as in a well-known scene from 1995’s Get Shorty). But coming from the same writer, director, and star as the first film, El Dorado feels more like a polished second draft than a true remake.

Technicolor in all its familiar glory is accurately presented here with the aforementioned Harold Rosson’s cinematography wonderfully rendered. Audio is presented in its original mono and is very clean.

Peter Bogdanovich offers sporadic commentary (a sentence or two separated by several minutes of silence), but his anecdotes about Hawks and comments on his directing style are well worth hearing. Richard Schickel manages to turn out a more well-rounded commentary about the plot and the entire cast. The seven-part featurette “Ride Boldly, Ride” is broken into segments that focus on either a member of the cast or crew or some aspect of production; it’s a very thorough look at making the film, featuring audio clips of Howard Hawks but sadly no vintage interviews with John Wayne or Robert Mitchum. As with earlier Centennial releases, former Paramount producer A.C. Lyles is interviewed for the main documentary as well as his own smaller featurette. The 1967 short The Artist and the American West is a look at painter Olaf Weighorst, who has a cameo in the film, with a brief appearance by Hawks and Wayne.

Although the plot and star have been recycled, El Dorado is still a gold standard of the western genre.