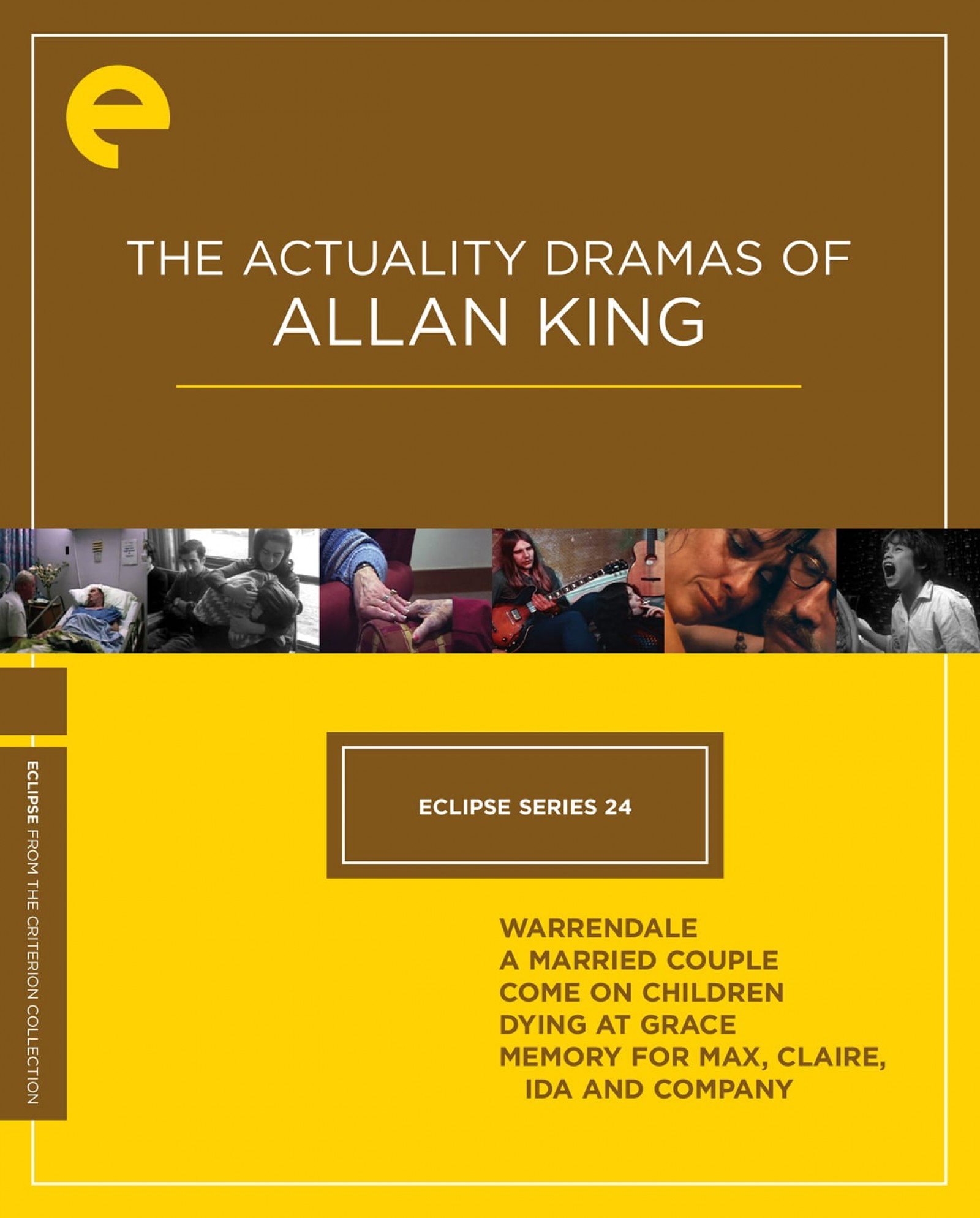 If there’s one great pleasure in a tormented cinephile’s life it’s the sudden and unexpected discovery of a filmmaker so involving, so essential, that experiencing their films sends your preconceived notions about genre, production, and even the rhythms of everyday life into a tailspin. Canadian director Allan King, whose five diverse and devastating “Actuality Dramas” are finally available via Criterion’s indispensable Eclipse box set, is such an artist. Ranging from King’s breakthrough feature Warrendale in 1967 to one of his final films, Memory for Max, Claire, Ida, and Company, in 2005, each entry feeds off the intimacy and scope of its predecessor, a true retrospective of an artist beginning, evolving, and finally reaching a sublime agreement life’s endings. Stylistically, King’s films have shifted from 16mm black-and-white stock, to color, then to digital video, but his focus and intent has always remained consistent: Bunker down in a single location to capture lives in transition. This approach allows King to invisibly attach to the actual drama on display, avoiding narrative crutches by disavowing typical documentary aesthetics like voiceover, intertitles, or talking-head interviews. It’s the layered subject that informs the viewer, not the filmmaker behind the camera, and, as a result, King’s films produce a graceful acknowledgement of life and death, glee and suffering.

King’s feature debut, Warrendale, about a collection of volatile children from the titular Toronto-based rehabilitation center, has been compared to the works of Pennebaker, Maysles, and Rouch within the cinema vérité and Direct Cinema movements. But King’s approach to capturing the children’s emotional ebbs and flows as they experience anger, guilt, and finally tragedy, seems arguably more human, hypnotically attuned to the delicate sensitivities of people’s movements and sounds. As the adult caregivers attempt to build trust with these damaged children, King focuses on the intimate moments of counseling, reassurance, and discourse structuring the narrative. That these sequences often devolve into hysterical fits and seizures makes the film all the more forceful, showing the dark undercarriage of childhood trauma without any buffer or safety net. The film’s striking emotional centerpiece, a family-style meeting between counselors and children about the sudden death of the house cook, is a breathtaking display of collective heartbreak and rejuvenation that creates a frenzy of repressed rage. In a single moment, King’s camera becomes engulfed in an emotional war zone, pinned down but never overwhelmed by honest, raw expression, always able to capture the small moments on the fringes of the frame.

Unnerving in an altogether different way, A Married Couple, from 1969, ventures into the world of adult showmanship through the conflicted relationship between Billy and Antoinette Edwards. King is given full access to their marriage, and his cameras watch as the suburban façade of happiness and understanding quickly crumbles away to reveal a tense power struggle for control within the modern middle-class household. Simple conversations become scenes of endless bickering, and assumptions about duty, responsibility, and loyalty turn into verbal daggers of resentment, clouding the colorful 1960s interiors with presumptuous hot air. King also finds the comical within the tragic, best on display when Billy walks out in a red Speedo and wool vest, a peacock flexing his feathers for a woman who no longer cares. The final quiet conversation between husband and wife takes a turn toward the absurd, but considering the jockeying that’s proceeded, this final compromise of love makes perfect sense. It’s hard to imagine a fiction film being able to capture this type of potent human dichotomy linking gradual suffering and survival.

For Come on Children, from 1972, King returns to the lives of troubled Toronto youths, but this time he creates the environment of study himself. After doing extensive interviews with local teenagers, King sent 10 of his subjects on a country retreat to a farmhouse where they could live collectively without the interference of adults, hierarchies, or rules. Each of the teens, ranging in age from 13 to 18, gets a musical introduction from one of the more charismatic subjects, a pimply ex-drug addict named John. His Dylan-esque folk narration gives Come on Children a reflexive identity, the best example his last lyric, “I’m not sure what the film’s about, but I hope the movie makes you feel that you wished you were here.” These kids understand the camera’s perspective, but that doesn’t stop them from unveiling a disturbing mixture of naïveté and hardnosed cynicism at the adult life waiting around the corner. Once again, King uses a collective set piece—a visit from everyone’s parents to the farmhouse—to show the dynamic drama breathing through the core of every conversation. If Come on Children is less successful at engaging the viewer’s sympathies, it’s because the Vietnam-era teens don’t see much to look forward to, an ideology King never sugarcoats.

After two decades of fiction films and television docs, King set out to address his own aging with an ambitious project charting the final months of five patients on the palliative care unit in Toronto’s Grace Health Care Centre. The result is King’s masterpiece, 2003’s Dying at Grace, a cinematic experience like no other, one that’s unequivocally devoted to examining the slow and methodical process of death. As with all of King’s films, the opening shot is incredibly pertinent to his end goals, and Dying at Grace is no different. As the opening credits roll, King follows the transfer of recently deceased body from a patient’s room to the morgue, as if to immediately display death as a forgone conclusion. King then introduces each cancer-stricken subject, first a rapidly deteriorating diabetic named Carmela Nardone, then Joyce Bone, Eda Simac, Lloyd Greenaway, and finally hard living ex-con Richard Pollard. Using the nightly nurse reports of each patient’s condition as a keen narrator, King constructs a lengthy procedural on the nuances of death, the deeply touching moments between family members and patient, and finally the staggering silence during the final moments of these people’s lives. The camera often hovers over the patients with astounding conviction, watching as their conditions grow from bad to worse, their breathing becoming more labored and wet, and their once strong voices fading away forever. Most devastating is the rapid decline of Eda, a breast cancer sufferer who begins to the film looking healthy and motivated to beat her disease. But over the course of the film, Eda grows more silent, more reserved, finally telling her doctor, “I feel like I just have to let go.” In the film’s wrenching final shot, Eda surrenders to her illness, King’s camera never leaving her side. Like the rest of the subjects, Eda is frozen in time, her passing an epochal, life-altering experience for the viewer.

Finally, King expands his exploration of the aging process with Memory for Max, Claire, Ida, and Company, an intimate personal diary for eight patients suffering from dementia and memory loss at the Baycrest Geriatric Health Care System. Whereas Dying at Grace documented patients succumbing to the inevitable, Memory focuses on the terrifying doubts, palpable relationships, and relentless patterns of the individual patient and their fragile grip on reality. The titular trio makes up a close-knit group linked by emotional necessity, and Memory delves deep into the haunting alienation each feels when one unexpectedly dies, and the others have to relive the tragic news over and over again. The process is difficult to watch, but in a final coup de grace, King upends stereotypes about the sick and aged by never abandoning them no matter how difficult the situation, his camera a tracker of the small, delicate emotions cinema usually can’t recreate.

When watched in close proximity, the films of Allan King become a long, organic timeline of flesh, blood, and tears documenting people on the ledge of physical and emotional change. As Michael Koresky aptly notes in his wonderful liner notes for the box set, “The term documentary seems too puny to describe the intense, passionate stories he [King] contrived to fashion from reality,” and this epic sense of revelatory humanity becomes King’s most generous auteurist trait. Through his unfiltered view of confined temporality and space, King’s cinema allows life to progress unhindered by sentiment, revealing fresh perspectives on all the varying degrees of emotion in between the tent poles of existence.

Warrendale displays a surprisingly crisp audio/visual transfer, as Allan King’s lightweight film camera pushes the boundaries of spatial relations. King’s two color films, A Married Couple and Come on Children, don’t fare so well, containing a number of scratches and color desaturation obviously due to the damaged source prints. Dying at Grace and Memory for Max, Claire, Ida, and Company are both shot on low-rent DV cameras, and the image is sometimes blurring and blown out in wide angles. But the fluidity in the images comes through in the adequate transfer, and these films really aren’t about pictorial images anyway. Despite the many visual flaws, it’s hard to imagine a better transfer for any of these films.

Allan King’s reputation as one of cinema’s great nonfiction filmmakers is cemented in stone with this release, and the Criterion Collection should get a Pulitzer Prize for releasing these five essential films on DVD.