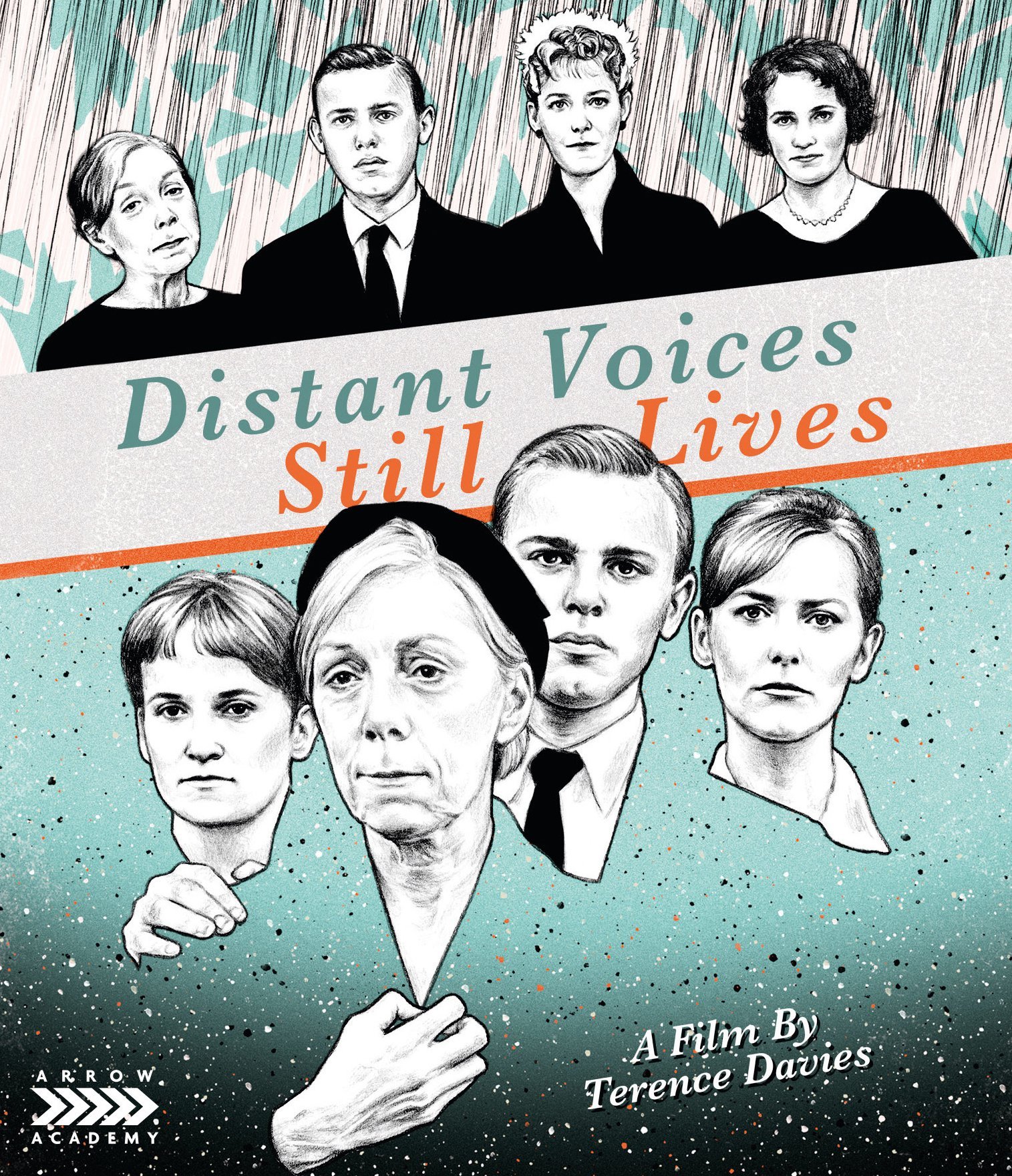 Not the least among its achievements, Terence Davies’s wondrous Distant Voices, Still Lives offers a crystallization of the appeal of the musical. An odd linkage, to be sure, since the genre’s trademark studio boisterousness would seem a world away from the kitchen-sink dreariness of the director’s mood piece about his years growing up with his working-class family in post-WWII Liverpool, dominated by his abusive ogre of a father. Yet Davies transcends the facile trap of misery porn by tapping into the basic notion of musicals as enlivening: music as direct expression, music as emotion felt. Cinema is the most unashamedly emotional of arts, and the musical feeds in no small part on repressed, frustrated sensations—the better to explode them with bursts of melodious bravura. What are musical numbers, after all, if not lyrically stylized declarations of feelings that could not be expressed any other way?

In genre terms, Davies’s opening “number” consists of a languid, almost ghostly tracking shot through an empty, dark-greenish living room as “I Get the Blues When It Rains” fills the air, dissolving then to a medium shot of the main characters in funeral blacks: Mother (Freda Dowie) and her grown children, Eileen (Angela Walsh), Maisie (Lorraine Ashbourne) and Tony (Dean Williams). Posed frontally in a spare, doleful tableau, they suggest figures in a faded family album, and, indeed, the role of memory is intensely connected to the director’s use of music. Songs from Davies’s childhood flood the soundtrack, and throughout the film there’s the feeling that each snippet heard is braided to an emotion biographically experienced and ripped, still bleeding, out of the past. When “Taking a Chance on Love” is heard while Mother sits on a windowsill polishing the glass from the outside, the lovely specificity of the moment becomes incantatory, the earthbound plainness turned as awesomely lyrical as the flashiest of Stanley Donen’s showstoppers.

Incarcerated in an all-too-real world, however, Davies’s characters are unable to swim into the Technicolor glories of their fantasies the way Vincente Minnelli’s or Tsai Ming-liang’s can. Davies cuts from the kids watching Mother by the window to her being brutally beaten by Father (Pete Postlethwaite), yet the filmmaker lets the same piece of music play as he shifts from a fondly recalled moment to a traumatic one. The obvious point of reference would be the sardonic bitterness of Dennis Potter’s The Singing Detective, though the 1987 miniseries’s irony is completely alien to Davies. In fact, Potter and Davies’s approaches couldn’t be more different from each other: Whereas Potter sees the lies of pop culture in the chasm separating idealized fantasy and cruel realities, Davies finds in it the possibility for salvation.

No MGM glitz pierces through the film’s visions of cramped interiors, bombing shelters, and abuse, yet it’s through music that the characters’ souls reach heavenward, even as their feet remain grounded in soot. To them, the very act of enjoying or actively performing a song constitutes defiant ecstasy, a moment of revolt against the crushing oppression all around them. Locked in the brig for briefly going AWOL to confront his father, Tony pulls out a harmonica and plays the theme from Limelight; feeling a continuation of her family’s patriarchal tyranny in her own marriage, Eileen rebelliously sings “I Want to Be Around to Pick Up the Pieces” in response to her domineering husband’s (Vincent Maguire) orders. In both cases, Davies displays a profound understanding of how art can liberate people from sorrow.

The film is an act of exorcism but also one of redemption. “I make films to come to terms with my family history,” Davies has said. “If there had been no suffering, there would have been no films.” Distant Voices, Still Lives is a far darker work than his subsequent The Long Day Closes, where he could freely, lyrically recall the burgeoning awareness of his homosexuality, his joy for cinema, or, simply, the stupefying play of light on a carpet. (As Armond White superbly put it, the difference between the two films is the difference between “memories Davies can’t get rid of and memories he won’t let go.”)

The filmmaker actually shot the film as two deliberately contrasting halves, each made with a different crew over a two-year phase: Distant Voices peeks through pale sepia tones while Still Lives abounds in ominous, ethereal fades to white just as painterly stillness alternates with gliding camera movement. The full title may imply the stagnation of oppressed lives, yet the film’s lasting impression is one of concentrated, purified motion, of images poetically triggering images, and, above all, of waves of feeling flowing from screen to audience and back. Never ignoring the characters’ pain as the family dissolves in the course of the film, Davies brings to their gatherings a heartfelt sense of emotional community struggling with the inescapable passage of time.

Although Davies has stated that in filmmaking he has worked out his reasons for rejecting his early Catholicism, Distant Voices, Still Lives remains one of the most profoundly spiritual films in recent decades. Davies’s utter faith is in human emotion, rendered through popular art; late-‘40s tunes, enriched over the years with the expressive personal connections they have come to carry, are no less sacred than the baptismal liturgy that welcomes Maisei’s (Lorraine Ashbourne) infant into this world. “Buttons and Bows” performed at a wedding reception, the crowd at the pub warbling “Bye Bye Blackbird” as the night comes to a close—these are instances of feeling distilled to its essence, as if Davies took the musicals he loved so much growing up and zeroed in onto the tremulous heartbeats. Time, joy, and family are transitory, yet Davies knows that the camera’s ability to capture them borders on the divine. I can think of few more moving expressions of this than the sublime ascending crane from the huddled umbrellas outside a theater that dissolves into a gentle pan over the rapt, weeping faces of the audience inside. From rain to tears, and set to the strains of the Love Is a Many Splendored-Thing score, Davies exults cinema’s transformative powers past, present, and future.

Terence Davies’s meticulous blend of realism and impressionism looks resplendent on Arrow’s transfer, which was sourced from the 4K BFI restoration. The grimy and worn façades of buildings are rendered clearly, and appear authentic in their muted drabness, while the vivid colors of the characters’ costumes and their enhanced memories (such as the ghostly lighting of the father on his sickbed) blaze intensely against the film’s naturalistic backgrounds. Though the film was shot on grainy, low-quality 35mm, detail is almost shockingly fine throughout, from the patterns of clothes to the dust and smears intricately caked on unclean windows. The disc’s lossless stereo track astoundingly conveys the film’s dense soundscape of musical quotations, diegetic singing, and on-screen and voiceover dialogue, while keeping each individual element crisply separated in the mix.

Terence Davies’s infectious energy and dry sense of humor, to say nothing of his melodious voice, always make him an entertaining commentator, and his track for Distant Voices, Still Lives is no exception. Pointing out the intricate network of audiovisual references and social and personal context of the film’s setting and characters, the filmmaker offers a wealth of information to the listener, including shot and scene analyses that border on the scholarly. Davies’s funny but mesmerizing input also dots a Q&A from a 2018 restoration screening of the film and a 2007 interview; in both interviews he talks not only about the filming process but about the autobiographical elements that informed the feature. An interview with art director Miki van Zwanenberg reflects on the exacting period detail of the film and how Davies’s method was both informed by and in conversation with kitchen-sink realism. Rounding out the package is a brief introduction to the film by film critic Mark Kermode, a gallery of production stills, archival newsreels about Liverpool, and a booklet containing new and reprinted essays on the film by Christina Newland, Beryl Bainbridge, Adrian Danks, and Adam Barker.

Terence Davies’s harrowing, beautiful diptych of childhood under and in the wake of tyrannical patriarchy receives a definitive release from Arrow. It’s a home-video presentation that honors the meticulous art direction and impressionistic filmmaking of a canonical work of British cinema.