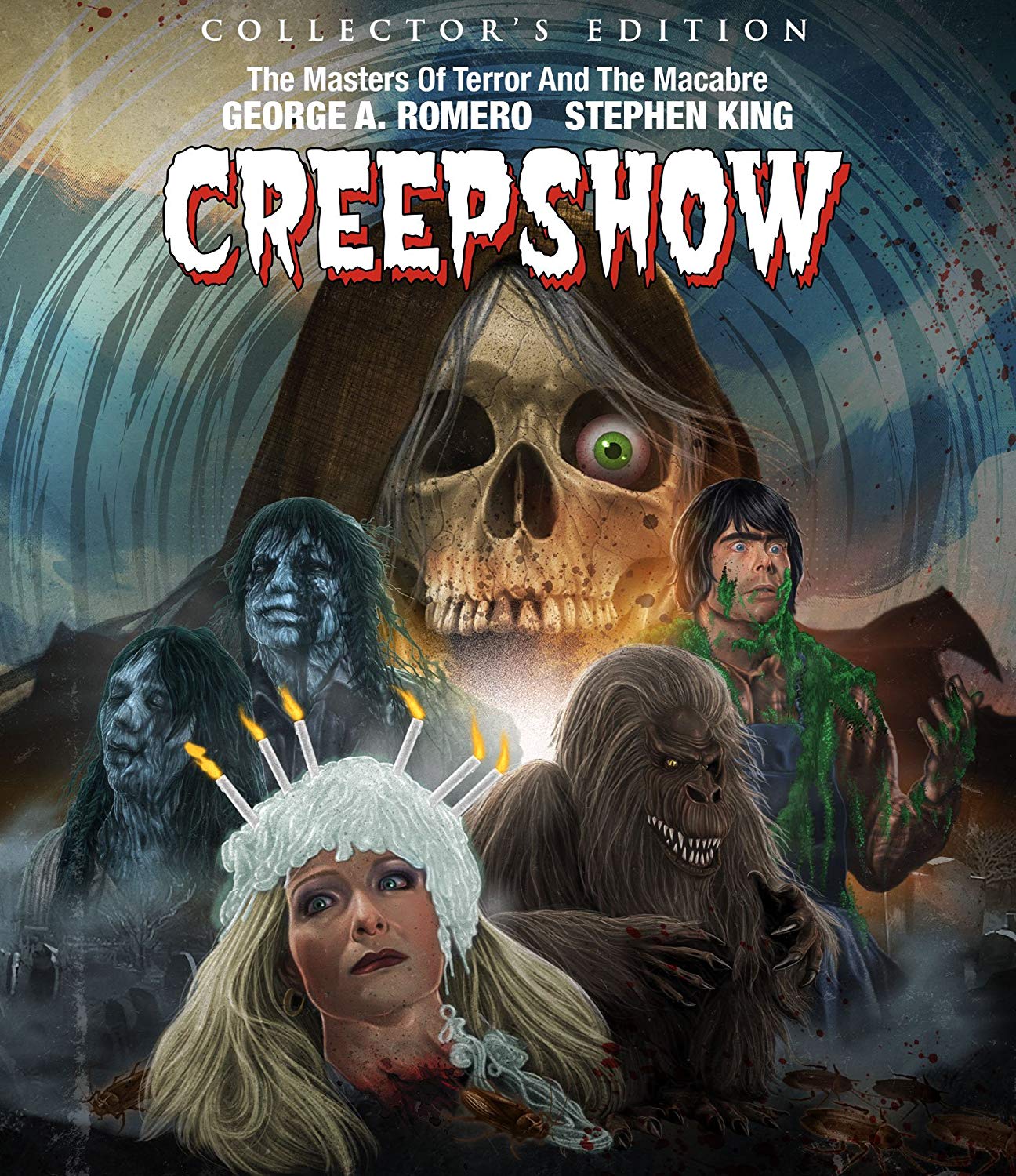 A meeting of two great masters of horror, Creepshow blends George A. Romero’s macabre brand of satire with Stephen King’s darkly moral vision of the world. The anthology film doesn’t blossom out from the nihilism that marks Romero and King’s more famous works, but from audience-friendly parody and their shared love of the infamous publisher EC Comics, one of the earliest targets and casualties of the Comics Code Authority. Comic-book aesthetics dominate the film, from vivid splashes of color to animated effects like frames divided into panels and page-flip transitions between segments. With Creepshow, Romero and King stepped far enough outside their creative comfort zones to find fruitful common ground in the film’s five stories, and without one artist’s personality outweighing the other’s.

Creepshow’s five stories are linked by a through line of sardonic moralism, a sense of reckoning redolent of Flannery O’Connor’s anti-fables. “Father’s Day” concerns a family grappling with the trauma of having lived a life under their now-deceased tyrant of a father (John Lormer), yet the widow (Viveca Lindfors) and her adult children are all foolish aristocrats whose narcissism and idleness makes it easy to root for their downfall when the patriarch returns from the dead as a dirt- and maggot-crusted skeleton demanding his Father’s Day cake. That the revenant obviously looks like a man wearing a rubber suit one size too big only compounds the farce of watching a bunch of trust-fund sloths demolished by the shambling corpse of their paterfamilias.

In “Something to Tide You Over,” a cuckolded husband (Leslie Nielsen) takes sadistic revenge on his wife (Gaylen Ross) and her lover (Ted Danson), only for them to return from their watery graves to enact a cycle of violence and revenge that lacks any clear demonstration of moral justification. The segment’s final image, of the deranged husband laughing defiantly in the face of his comeuppance, obliterates any satisfaction in his just deserts.

Often, Creepshow verges into outright goofy terrain. “The Lonesome Death of Jody Verrill” presages the plot of Jeff Vandermeer’s Annihilation by decades, but it plays the material for near-slapstick. King himself stars as Jordy Verrill, a hick farmer whose land and flesh is slowly overgrown with otherworldly grass when he touches a meteor that crashes on his property. In a film blessed with Tom Savini’s makeup effects, King sports a set of buck teeth that look as if they came out of a gumball machine, and wears the puffed-out, wide-eyed expression of a man attempting to pass a kidney stone the size of a Super Bowl ring. King’s writing and acting is so cartoonish as to rob the segment of menace, though some moments make for genuinely inspired comedy, as in a sequence of Jody feverishly imagining paying off his minor debt by selling off the meteor to a nearby university scientist (Bingo O’Malley, looking like a balding version of one of Rudolf Klein-Rogge’s mad scientists).

Elsewhere, though, the comedy only compounds the horror, as in the final two segments. “The Crate” manages to find the hopefulness of a feral, apelike monster wreaking havoc at a university as a henpecked professor (Hal Holbrook) wistfully dreams of feeding his nagging wife (Adrienne Barbeau) to the creature, his blissful looks of bloody imagination as funny as they are disturbing. “They’re Creeping Up on You” takes place in the antiseptic, sparkling white apartment of stock baron Upson Pratt (E.G. Marshall). The short satirically sees the man’s home as a metaphor for the isolating nature of extreme wealth, and the filmmakers dig deep into the manner in which Pratt’s mysophobic seclusion merely extrapolates from his prejudices and fears of common people and the filth of an economically unequal New York.

When roaches begin to invade his home, Pratt goes berserk, and his increasingly helpless calls to various underlings in the face of thousands of bugs make a subtle case for including the segment in Romero’s zombie canon, with pitiless hordes of insects subbing for the walking dead. The perfectly self-contained short film stands as one of the best moments in either Romero and King’s filmography, and the surprisingly gory coda is one of the most savage takedowns of the Reagan era and its conspicuous consumption.

Shout! Factory’s tendency to err on the side of too much clean-up for their titles could explain the occasional waxiness of faces and other objects on display throughout this edition of Creepshow. For the most part, however, this transfer, sourced from a 4K restoration, is an excellent presentation. Colors pop with hyperreal intensity, befitting the heavy influence of comic books on the film’s aesthetic, with reds and blues in particular boosted to luminous levels. Flesh tones are natural, while the details of Tom Savini’s typically incredible makeup effects are crisply rendered. Audio is near-faultless, with a 5.1 surround sound remix cleanly separating and distributing the dialogue and sound effects in all channels. (A lossless version of the original stereo is also included and similarly manages keep all of the elements equally clear). Neither track has any instances of hiss or tinniness.

The disc comes with three commentary tracks. An archival track with George A. Romero and Tom Savini provides a holistic overview of the film’s conception and production, while new tracks, one with cinematographer Michael Gornick and the other with composer/assistant director John Harrison and construction coordinator Ed Fountain, offers more grounded observations into a hectic shoot that saw the independently minded Romero butting heads with his studio overlords. A roundtable interview with cast and crew is filled with further anecdotes about their memories of the production. There are featurettes on the film’s comic-book inspirations and animations, as well as ones on the film’s restoration. A brief interview with some of the staff at movie art studio Mondo delves into the film’s influence on their work, and there’s also a feature on superfan Dave Burian and his extensive collection of Creepshow paraphernalia. Some throwaway deleted scenes are also included alongside behind-the-scenes footage and various promotional material. Finally, an accompanying booklet contains an exhaustive essay by former Fangoria editor-in-chief Michael Gingold, who covers the film’s conception and production, as well as its lasting influence on the horror anthology genre.

George A. Romero and Stephen King’s goofy tribute to the horror miscellany of their youths is a funny, technically impressive lark that confirms them both as masters of horror and parody. Shout! Factory’s disc honors the film with a restoration transfer and a slew of meaty extras.