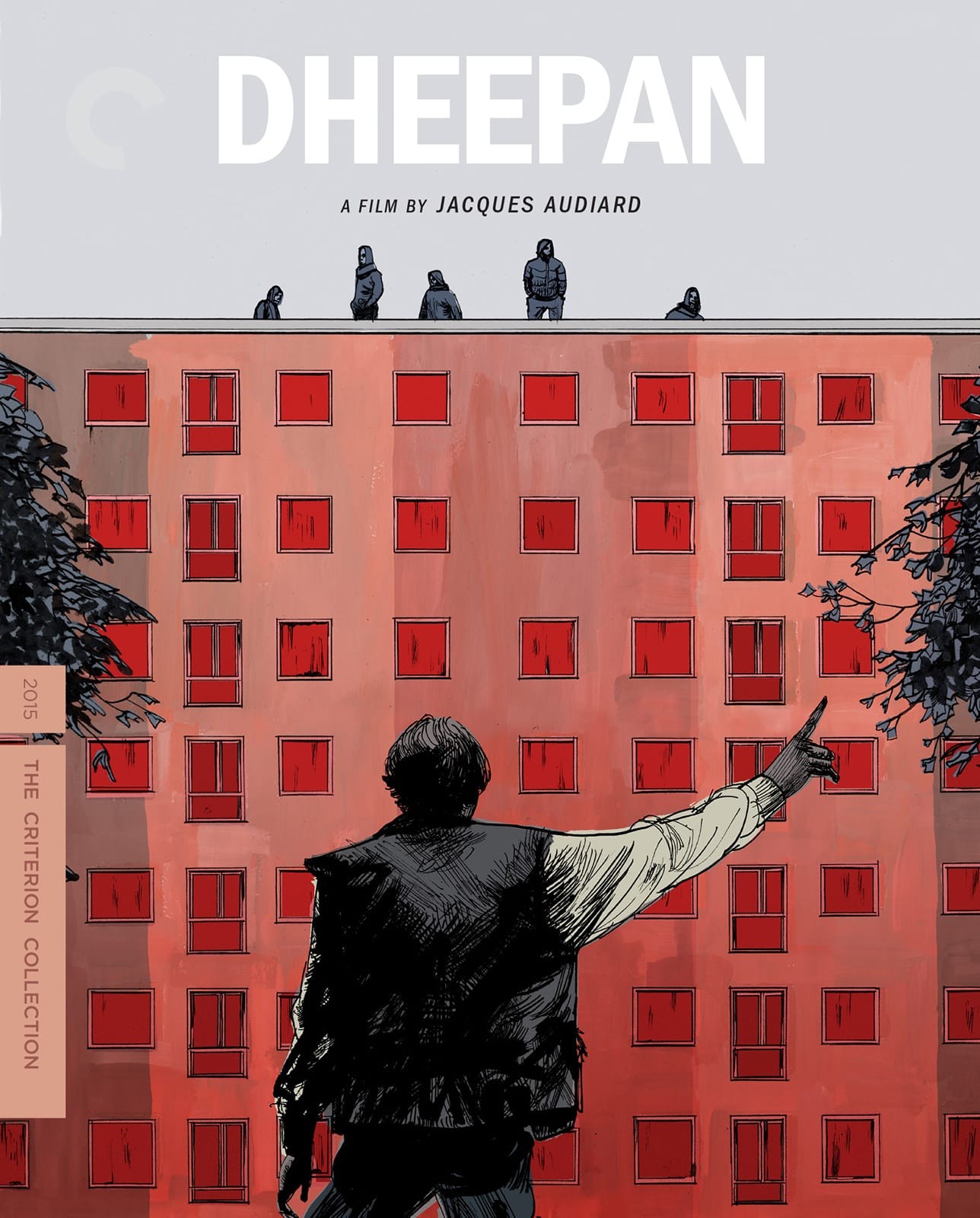 During the country’s interminable, bloody civil war, which stretched from 1983 to 2009, Sri Lanka’s separatist LTTE movement (commonly referred to as the Tamil Tigers) practiced a bidirectional system of indiscriminate violence, a technique perfected by groups like the Viet Cong and Afghan Mujahedeen. By carrying out high-profile attacks on its ostensible enemies, along with a less-publicized, surreptitious program of kidnapping and terror within the Tamil ethnic minority, the group forced the illusion of a united front, ingraining itself inseparably into the fabric of the community from which it sprung. In Dheepan, the title character, played by former Tiger militant Jesuthasan Antonythasan, finds himself in a new nation, yet faced with a remarkably similar state of affairs. Expelled by the Sri Lankan government after the long conflict draws to a close, he’s shuttled off to France, hired on as the caretaker for a suburban housing project. Here, despite having no stake in the network of drug-fuelled turf battles that plague the crime-riddled development, he’s drawn into a clash that forces him to become a warrior once more.

In the film’s clear-cut reckoning, an implicit rejection by mainstream French society has cold-shouldered these outsiders into occupying a grim shadow world, where brute force prevails over established rule of law. This setup, while fringed with liberalistic compassion, is about as agonizingly didactic as it sounds. The concept of an immigrant story told without the intrusion of a classically “French” audience analogue is admittedly a welcome change, and the characterization in Dheepan is generally strong enough to avoid most of the pitfalls of this type of well-intentioned character study. Yet the reconstruction of the embattled Parisian banlieues as the mirror image of the warzones from which these people have emerged rejects the unique political and regional specificity that contributes to both old-world conflicts and new. In attempting to draw these problems into sharper focus, director Jacques Audiard reduces most of the complexity surrounding them, leaving the film struggling to overcome the burden of an over-simplified, moralizing setup.

This is a shame, since Dheepan is impressive in other regards, central among them the stellar performances by its three nonprofessional leads. Where Dheepan is forcibly expelled from his country as an undesirable element, Yalini (Kalieaswari Srinivasan) is forced to work harder to escape, banding together with orphaned child Illayaal (Claudine Vinasithamby) to take on the identity of a deceased mother and daughter. They’re paired up by local officials with the newly christened Dheepan—also an assumed identity—as the three individuals form an imaginary family unit to bolster their refugee status. Alone in an unfamiliar new country, these invented familial bonds become genuine, each member settling into their new roles with a cautious mixture of discomfort and relief. As Illayaal struggles with school, Dheepan attempts to adjust to the rigors of working life, cleaning up after the cavalier young drug dealers who effectively run the towers. Of the three, Yalini undergoes the greatest transformation, donning a headscarf to fit in with the block’s mostly Muslim populace—despite her Hindu faith—and enters into an uncomfortably close proximity to renewed violence as the caretaker of a frail local drug lord.

The depiction of this artificial unit is the film’s greatest achievement, both a self-contained dramatic account and a neat metaphor for how immigration subtly recontexualizes the structure of family relationships, forcing migrants to reexamine their individual and collective status. Yet Dheepan ultimately seems less interested in this small story than its overall place within the decrepit development, which in turn functions as an imagined microcosm of the larger emigrant diaspora. Gradually overcome by the Sisyphean hopelessness of his job, Dheepan’s passage from browbeaten working man to active, angry participant in the war brewing between the two sides of the apartment block seems to seems to parallel the film’s growing disinterest in domestic concerns, as it itches to progress into pulpier business. Injecting himself into the fray, he undertakes a program of rash self-expression that seems destined to destroy his new family rather than protect it.

Instead, the blowout conclusion confirms the abandonment of the domestic storyline. Audiard rejects a more reasonable ending in favor of a slate-clearing, Taxi Driver-inspired climax, which pointlessly fringes into fantasy territory. This noisy culmination confirms the unfortunate ultimate focus on masculine renewal at the expense of the family dynamic, and Audiard’s direction, while generally skillful, further contributes to an overall sense of shallowness. As with A Prophet, which shared the setback of strong central performances undermined by didacticism and often questionable authorial choices, the film threads a line between intimate family drama and preachy bombast. The final showdown abortively resolves that conflict, demoting Yalini and Illayaal to background players in the title character’s sketchily conceived redemption arc, one which demands us to reject the circumstances that lead to Dheepan’s violent acts while cheering for their victorious outcome.

Compare this to the intricate personal geography of a film like Eastern Boys, which approached a comparable cross-borders scenario with similarly brash stylization, organized itself around analogous flashpoints of abrupt violence, and also ended with a climactic assault carried out upon a settlement of put-upon immigrants. Robin Campillo’s film, however, applied a level of nuance and consideration that Dheepan cannot match; it’s telling that one story’s conclusion feels like a hastily conceived getaway from its quieter, less explosive early stages, while the other’s acts as the bittersweet, catharsis-free denouement of a complicated tangle of concerns. As Europe’s boundaries become more porous, and hostilities outside of them force more and more people to flee West in search of a new start, films like this one will only become more common. Hopefully they’ll possess as much heart and respect, but a bit more complexity in their presentation of these issues.

This Blu-ray boasts a high-definition digital master, supervised by director Jacques Audiard and cinematographer Éponine Momenceau, and the image quality remains sharp and without fault throughout. A considerable amount of care and attention has been put into this transfer, which consistently brings out even the tiniest pieces of light featured in several scenes of low-key lighting. Color timing is balanced and appropriate, while changes in perspective are handled with no noticeable defect. The 5.1 surround DTS-HD master audio track offers up the film’s music, dialogue, gunshots, and flames in a delicate but still ferocious sound mix.

Audiard is at the forefront of the disc’s extras, providing both a standalone interview and an audio commentary track with co-writer Noé Debré. The interview delves into the origins of Audiard’s career in the 1980s as a screenwriter, as well as his turn to directing features in the ’90s. He modestly speaks of his own art, explaining his aims to have a direct relationship with cinema, where a combination of image and music often constitute his entry point into a scene. Audiard discusses this while regarding this film’s title sequence, wherein Dheepan emerges from darkness wearing blinking bunny ears to the sounds of a religious hymn. The commentary track features Audiard and Debré sharing tidbits of information about the production and discussing their thought processes on placing a Sri Lankan immigrant narrative at the center of a Parisian suburb’s turf war. But the most essential extra is an interview with actor Jesuthasan Antonythasan, who explains the autobiographical contexts of his own life as a Tamil Tiger and his own immigration to France in 1993. Rounding out the disc: a handful of deleted scenes, a trailer, and a new essay about the film by critic Michael Atkinson.

Paris, 13th District Review: A Cumbersome Look at Love and Sex in the Digital Age