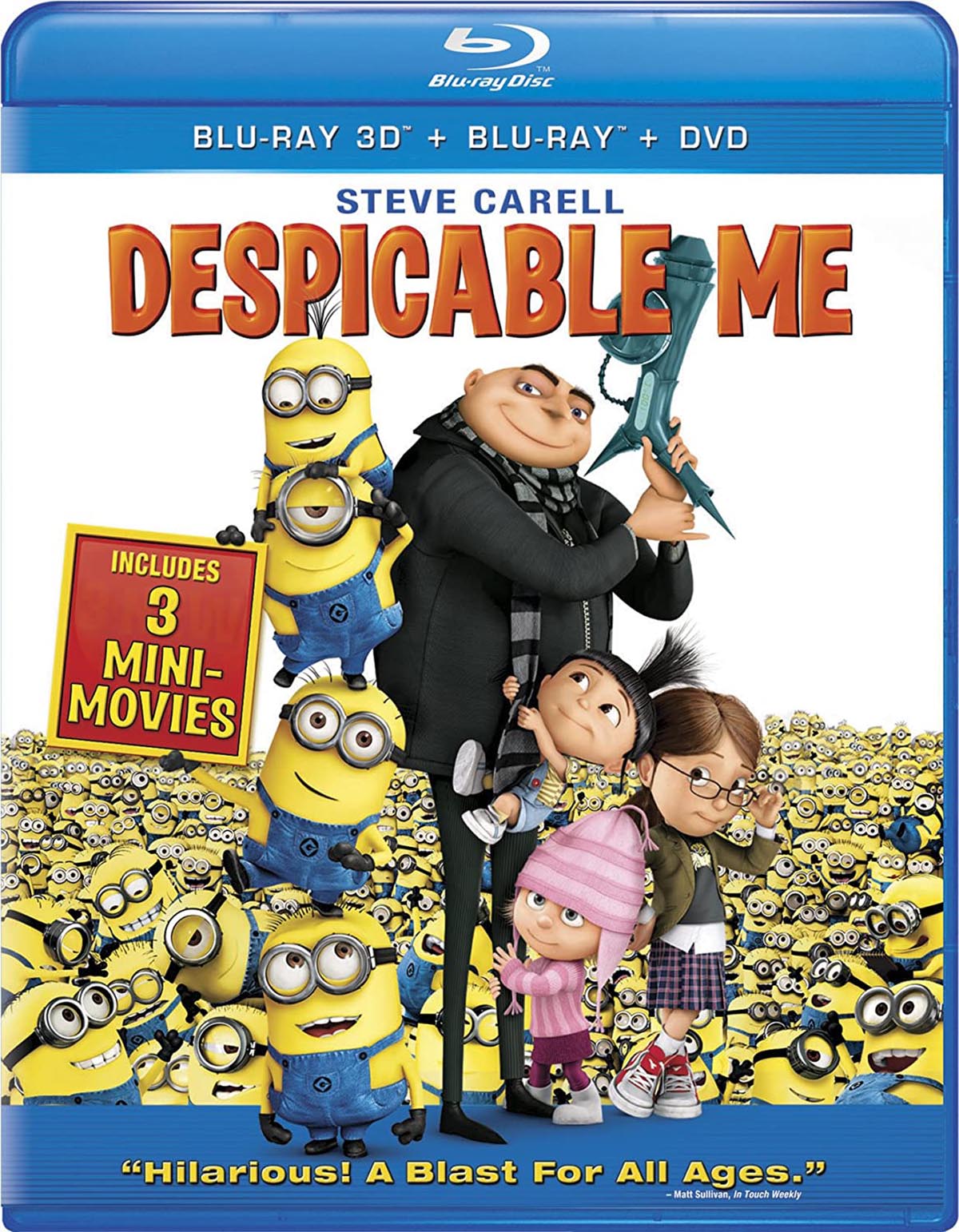 The relationship between a film’s title and its narrative/thematic/stylistic elements is not always easy to trace. While many films line up both cinematic label and design around an easy to understand package, sometimes the two are in direct conflict with each other (like Claire Denis’s masterful White Material), suggesting a tension inherent to the film’s purpose as art. Despicable Me is an interesting oddity in that the title evolves along with super villain Gru’s (Steve Carrel) development as a character. At first it plays like a proud moniker for a dastardly creep, but slowly transforms into an honest confession of a repentant sinner, all while Gru grows increasingly entranced by the wonder and fulfillment of childhood innocence. The duality between what’s on the marquee and up on the silver screen elevates Despicable Me from what could have been a tired children’s film to a more enveloped study on longing and purpose, connecting it’s kindhearted nature with Lee Unkrich’s more well received analogy on growing old, Toy Story 3.

Yet Despicable Me creates a cartoon universe all its own, filling the modern world with both sci-fi technology (shrink ray gun, inflatable pyramids) and details of an unglamorous reality (selling cookies, adoption), allowing each to exist side by side in a seamless, fluid context. Gru’s gigantic space ship acts as a massive transport vehicle not to just the moon, but the local coffee shop, while his nemesis Vector’s (Jason Segal) massive fortified palace (strapped with heat seeking missiles, lasers, and man-eating sharks) resides in the middle of suburbia. This juxtaposition of the fantastic with the mundane mirrors both the evolution of the film’s title and Gru’s metamorphosis from selfish baddie to caring patriarch.

Co-directors Pierre Coffin and Chris Renaud surround Gru’s trajectory with a very concise conflict, a parallel battle for approval between two man children trying to please their constantly unimpressed parents. Vector’s father (Will Arnett) is a rotund corporate thug playing puppetmaster to the proceedings, while Gru’s mother (Julie Andrews) barely utters a world except when motioning her disapproval. But unlike Vector, Gru contains a caring spirit even when up to no good, a fatherly demeanor that he conveys to his countless yellow minions (who he knows all by name) and his friend/colleague Dr. Nefario (Russell Brand). Vector is often by himself, showing that isolation and individualism are the real warning signs of an unfulfilled life. Even though the possibility for physical danger rarely takes serious hold for either of these characters, Despicable Me is more concerned with inward reflection rather than outward conflict or aggression.

Densely layered locales and textures play a key role in Gru’s quest to “steal the moon” more than the largely generic plot devices. The actions of each character never move past the initial cause and effect stage, yet the spaces in which these actions take place contain an incredible amount of nuance and detail. The infrastructure of Gru’s house seems to be caught in mid-contortion, infusing Caligari-esque angles with a homey appeal that fits the overall pleasantness of the curious and rambunctious “minions.” Also, the Evil Bank “formerly known as Lehman Brothers” has the essence of a noirish library out of the 1930s, a dimly lit lair where shadows appear even on the shiny metal surfaces of the vault. Potent hues of blue (the moon, water), red (carnival), orange (Vector’s track suit), and yellow (pyramid, minions) fill each of these spaces until the frame is about to burst with contrasting shades, making Despicable Me a film about the gradations of color just as much as character.

In the end, as Gru becomes immersed in the rewarding and selfless relationship with his children Margo (Miranda Cosgrove), Edith (Dana Gaier), and Agnes (Elsie Fisher), Despicable Me ponders the effects of positive reinforcement against the constant negativity both he and Vector have grown up with. All of the impressive cinematic aesthetics boil down to the fact that every child, no matter the background, yearns for a connection (not just approval) with their parents, and more importantly can push forward if all they find is adult indifference. But it’s the idea that a character, much like a film’s title, can take on new meaning mid-moment that makes Despicable Me a family film worth considering. Sure, we’re all despicable at some point in our lives, but there’s always an underlining element at work ready to reveal the lighter flipside of our own dark intentions. Despicable Me isn’t afraid of taking the good with the bad, as long as the end result is childproofed for danger.

Despicable Me looks incredible on Blu-ray, with every ounce of the film perfectly rendered for maximum viewing effect. Colors resonate, textures have depth, and you can see every detail on the characters’ faces. This is a film about densely packed interior spaces and grandiose landscapes, and the 1080p transfer allows the audience to feel the cinematic wallop of both. The carnival sequence is especially beautiful, since the film gives way to the young girl’s perspective and relishes in the pink cotton-candy hues of this chaotic moment. The sound design is wonderfully balanced as well, with the constant chatter of Gru, his minions, and the rest of the cast seamlessly overlapping without any confusion. Also, ray gun blasts, missile explosions, and space ship zooms all have a pristine clarity that makes their presence in the film all the more impacting.

This extra’s section is dominated by youth-oriented material, proving that the disc is obviously marketed for children and families. The “Voices of Despicable Me” is a short feature on the acting talents behind the film, including Steve Carell doing his sarcastic shtick, Jason Segal lapping up his character of Vector, and iCarly star Miranda Cosgrove gleefully tackling the innocence of Margo. “The World of Despicable Me” is another behind-the-scenes featurette that covers a lot of the same ground as the previous one, just with more formal interviews of key cast and crew. Music is so important in the film, but it’s almost an afterthought in the three-minute “Despicable Beats,” following Pharrell Williams’s approach to constructing the hybrid musical score. A host of interactive games, including “Super Silly Fun Land,” “Gru’s Rocket Builder,” and “Miss Hattie’s Top Secret Cookie Recipe” would be perfect for young children, but that’s about it. Lastly, the audio commentary by co-directors Pierre Coffin and Chris Renaud seems to be guided toward children as well, considering their often rambling, joking way of discussing the film. Also included are trailers and “A Global Effort,” a very short look at the international production team behind the film.

Despicable Me is undeniably enjoyable and fun as a children’s film, but it also works as a revealing story of redemption for a “super villain” that can’t help but be a great father.

DVD Review: America Lost and Found: The BBS Story on the Criterion Collection

Review: Banksy’s Exit Through the Gift Shop on Oscilloscope DVD