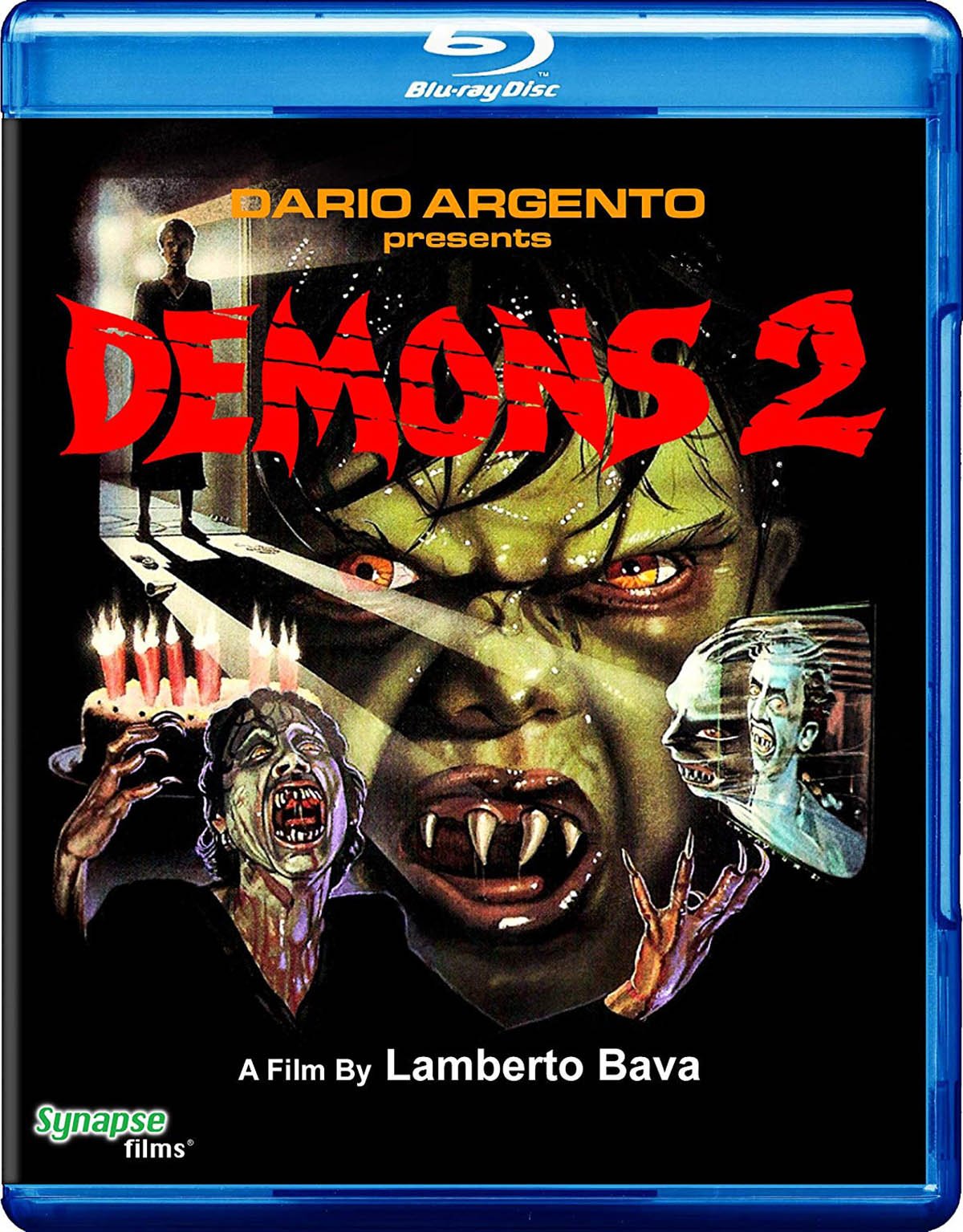 Lamberto Bava’s Demons 2 emblematizes the Freudian repetition compulsion that lies at the dark heart of the horror genre. Audiences, so the theory goes, flock to horror movies (and, by extension, their ever-proliferating sequels) to come into visceral contact with some primal traumatic shock. By confronting and thus “mastering” the trauma, viewers convert the experience from a psychic wound to a malleable source of pleasure. Film industries, naturally enough, encourage the “sequelitis” engendered by this phenomenon. First off, there’s the economic advantage to be derived from churning out sequels that carry over a cohesive cadre of personnel from production to production. It also allows filmmakers to more effectively establish storytelling boilerplates that winnow narrative down to an affective algorithm: Witness the stopwatch precision evident in much modern horror, where the scares come along in intervals readable and reliable as any railway timetable.

Demons 2 fuses these aspects. On the one hand, the majority of the first film’s crew and some of its cast return for the follow-up. The biggest shake-up here involves swapping composer Claudio Simonetti and a soundtrack fueled by howling heavy metal for Simon Boswell’s more ethereal synth score accompanied by brooding Brit new wave acts like Dead Can Dance. On the other, the film’s narrative stands somewhere between reprise and remake (analogous in that regard to Sam Raimi’s Evil Dead 2) as a new demonic infestation breaks out among a different set of claustrophobic corridors. Exchanging the gothic Metropol theater for a steel-and-glass high rise named, blandly enough, the Tower has the added advantage of imbuing Demons 2 with traces of quasi-Cronenbergian craziness of the Shivers strain. There are the same pointless (not to mention tension-sapping) cutaways to supernumerary characters visiting a beer garden, as well as another carload of bootless delinquents, with an even more meager payoff than in the previous film. And where Demons went meta with clever usage of a film within a film, Demons 2 embraces the medium cool of television for its self-reflexive shocks.

The film opens with yuppie party girl Sally (Coralina Cataldi-Tassoni) abandoning her birthday bash to watch a broadcast that seems to pick up right where the first film concluded. But this version of the material turns out to be more interactive when one of the demon berserkers suddenly notices Sally and tears itself out of her TV screen to spread its contagion into the “real world.” It’s a scene that clearly nods to Cronenberg’s Videodrome, though, as with the film’s medium-specific finale, Bava and his screenwriters merely milk the scene for shocks without providing the cream of social commentary. Nor does Demons 2 derive much mileage out of the Tower’s hermetic self-containment. There are some admittedly hilarious scenes set in the gym run by musclebound Hank (Bobby Rhodes, who was quite memorable as Tony the pimp in Demons). Alpha-male Hank leads a defense brigade into the garage for a final stand that’s absolutely risible in its utter fecklessness, yet it’s hard to know whether this actually counts as pointed satire. It might simply be a consequence of the sequence’s frenetic, slapdash staging.

Comic relief of a decidedly surreal bent leavens a pair of batshit crazy scenes. One involves an infected canine turning on its mistress (shades of Argento’s Suspiria). The other is the even more gonzo moment when the demonically possessed child terrorizing pregnant Hannah (Nancy Brilli) “gives birth” to a demon baby with a face like a Venus flytrap, presaging the troublesome zombie toddler in Peter Jackson’s Dead Alive. These scenes work well enough on their own terms as isolated set pieces, but there’s the unavoidable sense that they exist more as showcases for Sergio Stivaletti’s impressive gore and mechanical effects than as integral parts of an overarching narrative. Then again, they’re perfectly in keeping with the surrealist tenet that would privilege incitement over lucidity any old day.