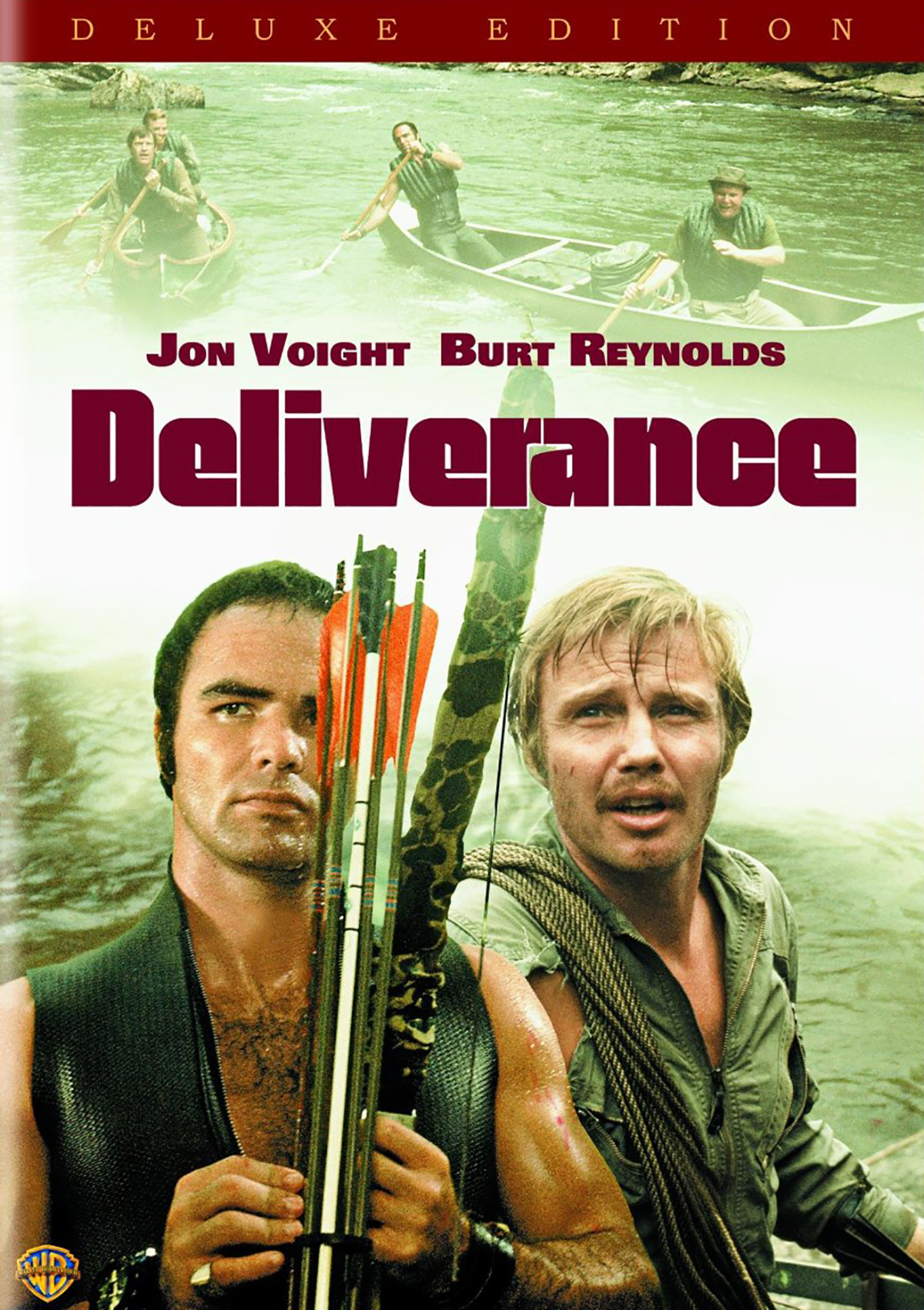 Whenever people go into the deep wilderness or mountain country, they whistle the tune to Deliverance. While the dueling banjos sequence that kicks off this eerie Southern nightmare is a virtuoso moment, during which four city boys, one of them with a guitar, are for a moment able to connect with the grim, poverty-ridden hillbillies they will never understand, it has come to represent a primal fear in viewers; not just a fear of the woods, but the fear of willingly going to an unknown place and being violated there. During interviews, actor Ned Beatty says that in his experience of talking about Deliverance, men respond to the canoe trip and the boy’s adventure aspect of the story, but that women are the ones who really know what it’s about.

There is a certain sense of haunting and oppressive fear even during the adventure, but always of a sexual nature that many men might feel uncomfortable with, but are certainly curious about. Four men paddle their way down a river so wild, it taps into their most primal excitement, hurtling through the frenetic bends and turns of the river. After they get through the first set of rapids, Bobby (Beatty) turns to his friends and says, “That was the best—the second best—feeling I ever felt!” Not long after, Bobby and Ed (Jon Voight) take a quick detour and are set upon by grungy mountain men who emerge from the woods. And Bobby is raped and made to squeal like a pig while Ed watches, tied to a tree.

Each actor is attuned to the character he plays, but all of them are dominated by the mysteriousness of the hill country. When they arrive in their cars with their canoes, Boorman frames them up in vast wide shots allowing us to drink in this alien landscape, and many sequences play out in one shot with men looking small underneath the trees and in the valleys. When Boorman cuts to a close-up, it matters. During a philosophical argument about the right and wrong of burying the corpse of a hillbilly they have killed, the discussion plays out in a wide shot, and a judicious close-up of an unspeaking Beatty is inserted midway through, which reminds us that only moments ago we bore witness to a reprehensible, savage violation.

This man-versus-nature story is also about man indulging his most uncivilized instincts, and in their various ways the four men on the canoe trip are transformed. The first half of the movie is dominated by the charismatic Lewis (Burt Reynolds), who swaggers and pontificates about how we haven’t lost that impulse deep within ourselves for connecting with nature. He speaks with a cheerful, good old boy’s contempt for Voight’s “nice house, nice job, nice wife, nice kids” right before demanding to know why his friend goes on these adventure trips with him. If we shake off that bourgeois sense of status quo, then what? Dickey taps into that stark mortal terror of abandoning control, where to become a wild man is somehow a form of connection. This becomes disarming when you consider that the act of suffering and the sense of being in touch with your life are, indeed, strange bedfellows.

In his director’s commentary, John Boorman admits this movie looks like it could have been filmed last week. Unlike so many films shot in the 1970s, there is no image fading to be found here, and the DVD preserves all the rich colors and textures of the forest-including the “acid green” of the trees and the diverse olive and brown colors of the woodlands. The sound quality, likewise, is crystal clear.

The featurette describing the making of Deliverance is an entertaining yarn. In interviews, the lead actors and director go into great detail on how they went out to this remote Georgia river with a skeleton crew and no production insurance, learned how to canoe, and fought their way through principal photography day by day. A particularly memorable character in this oral history is Dickey, a swaggering, drunken loudmouth who only referred to the actors as their character names and aggressively lied to each of them, swearing up and down that this story was all true and actually happened to him. (He was a habitual liar who fabricated not only stories, but much of his life.) According to Boorman’s informative and highly entertaining commentary track, the actors got sick of his macho blustering and bossy interference as they were trying to get down to business and rehearse, so they asked Boorman to get rid of him. Boorman did, insisting that Dickey had to leave, and to only come back when they needed his formidable presence in the role of the local sheriff. Dickey told the actors, “It appears that my presence would be most efficacious by its absence,” then walked away. Burt Reynolds turned to Boorman and asked, “Does that mean he’s going or staying?”

A haunting masterpiece, as mysterious as the deep, dark woods.