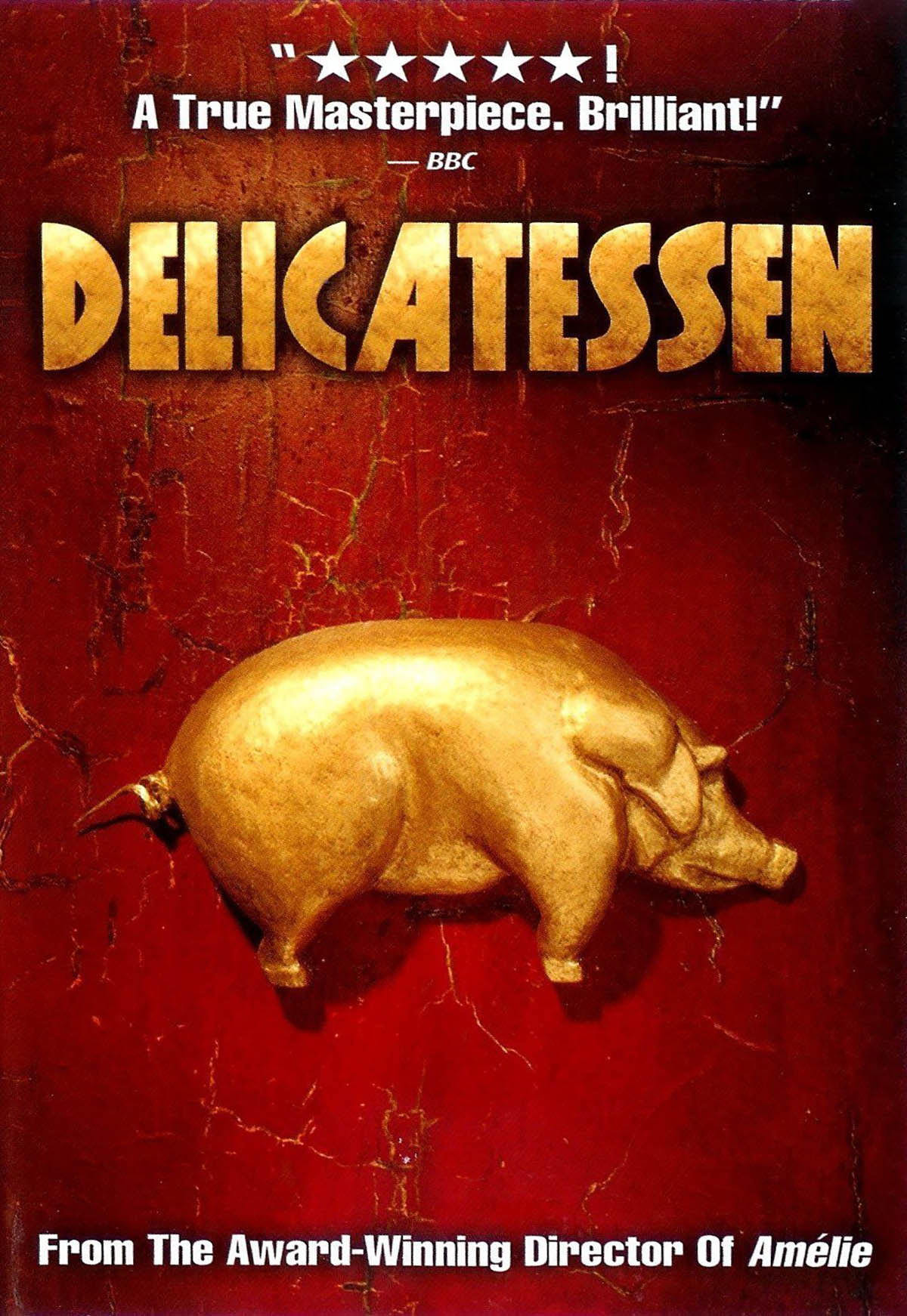 Jean-Pierre Jeunet and Marc Caro shoot their movies to look like grotesque Saturday morning cartoons, which leads some critics to draw parallels between the two French directors and Hollywood’s gothic maestro Tim Burton. But this comparison, like the one constantly made between Quentin Tarintino’s shallow gun porn and his French New Wave inspirations, looks only at the surface and fails to recognize Jeunet and Caro’s lack of compassion for their characters. A sharp emotional current runs through the elaborately staged opening sequence of Burton’s Batman Returns, in which the deformed Penguin’s parents abandon him in Gotham City’s sewer system—behind the camp and tinsel, it’s a movie about anti-heroes with tragic pasts that propel them toward self-destructive ends.

Delicatessen, though equally concerned with its green-tinged post-apocalyptic aesthetic, uses its aggressive stylization and capricious visual contraptions as a form of imprisonment, reducing characters to the respective color codes of their apartments. Juenet and Caro would probably call these people “quirky” or “offbeat,” but that’s just another way of saying they’re mere additions to the filmmakers’ fantastical toy chest. Whether it’s the movie’s maniacal cannibal butcher Clapet (Jean-Claude Dreyfus), his sexually repressed daughter Julie (Marie-Laure Dougnac), or Stan Luison (Dominique Pinon), the latest handyman eyed by Clapet as more raw meat, every tenant in Delicatessen’s swirling apartment complex is defined by a kitschy piece of costume design or a villainous grin, and each is quickly used and discarded like a chess piece in the movie’s cat-and-mouse game. (Jeunet and Caro have the coolly disinterested sense of humor to name an early victim of the butcher, in the credits, “Tried to Escape,” the type of crass idea taken directly from the Tarantino playbook.)

In one ridiculously off-point piece of slapstick, Luison and a fellow tenet bounce on a bed to pinpoint a squeaky spring, sending reverberations that signal sex throughout the building. In this way, Jeunet attempts the same awkward kinkiness that made his Amelie redeemably cute; just like Amelie loves to submerge her hands in raw beans, Luison takes great pride in his former career as a clown with a sidekick monkey. But Delicatessen, in addition to suffering from the same preening preciousness that made Amelie ultimately forgettable, also overdoses on its cartoonishly oppressive surroundings—a rapist mailman, food-snatching neighbors—all too repetitive of Terry Gilliam’s Brazil and far less meaningful. Jeunet and Caro stuff themselves with all their favorite obsessions and the result is both unfunny and very unappetizing.

Delicatessen works overtime to achieve a certain look, from its vomit-green tint to the liberal amounts of smoke that inexplicably billow around the movie’s central sound stage-I mean apartment building. (Note to Earthlings: the post-apocalyptic world looks a lot like Michael Jackson’s “Thriller” video.) Jean-Pierre Jeunet and Marc Caro’s aesthetic may be as loud as a megaphone, but this DVD at least stays faithful to their bloated vision: It’s preciously shot but an intentional sickliness seems to fill each image. What’s more, the print is remarkably clean. Sound is only available in Dolby Digital 2.0 but it’s a full-sounding track.

Jean-Pierre Jeunet turns out to be much more enchanting than his movies. In his commentary track (without Marc Caro, because he “doesn’t like commentaries”), Jeunet turns more than a few cute phrases in his throaty French and offers fans some enlightening anecdotes on production as well as Delicatessen’s real-life backstory of when Jeunet lived above a butcher shop. Discussion of the film itself, though, is limited, and for that I’m thankful. An included featurette lazily slaps together 13 minutes of aimless, disjointed footage detailing the movie’s shooting, though hardcore Jeunet fans will probably appreciate some of its funnier asides. There’s also a reel of actors’ rehearsal videos, the movie’s theatrical trailer and several teasers.

With Delicatessen, Jean-Pierre Jeunet and Marc Caro shoot for a Terry Gilliam-esque grotesque beauty and only hit grime.