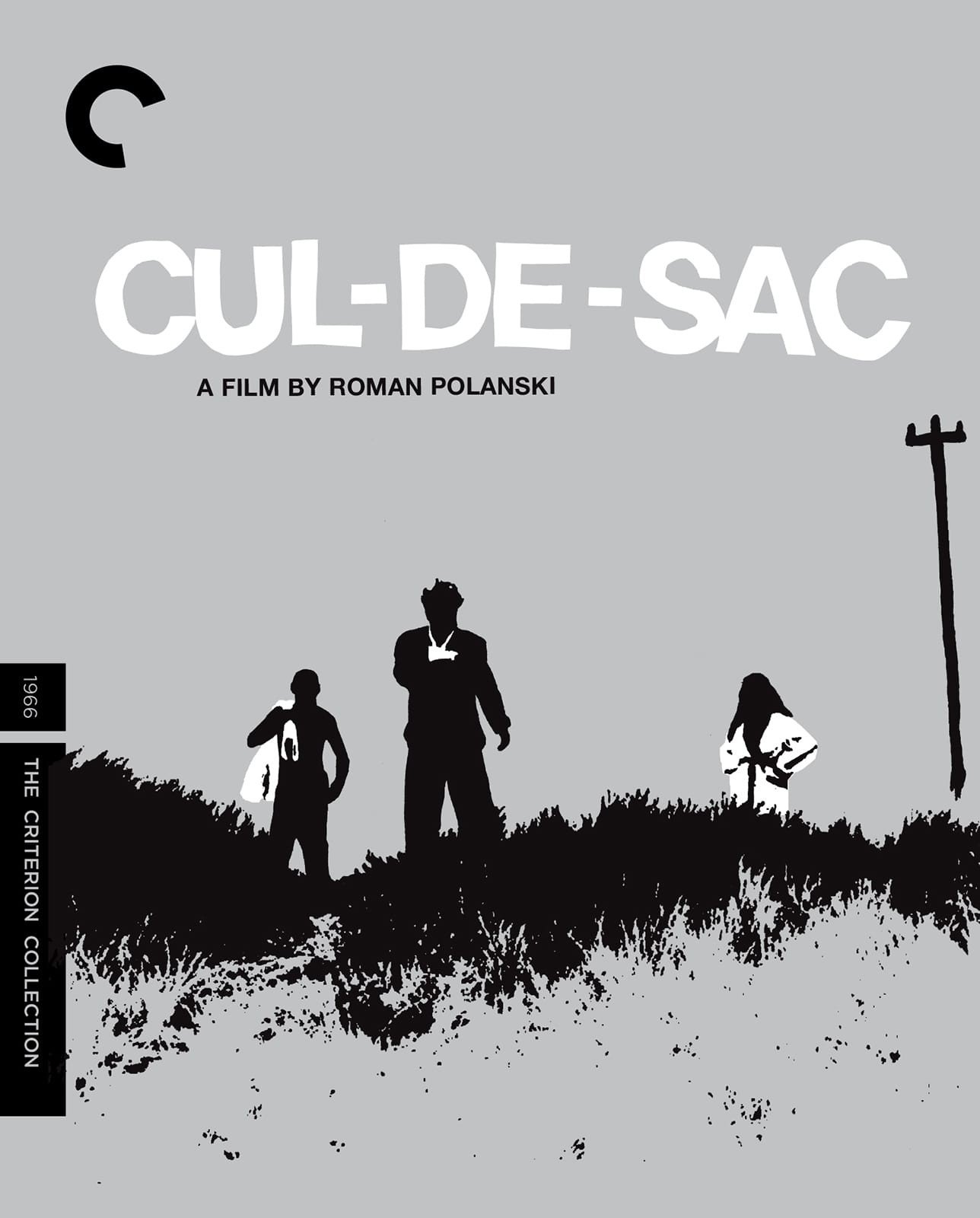 Roman Polanski’s Cul-de-Sac remains a searing reminder that the filmmaker’s idiosyncratic grasp of the human mind was once evinced theatrically, rather than through narrative ferocity. Where Chinatown, The Tenant, and even more recent films like The Ghost Writer pervert their sense of humanity with plot twists, the moral dynamism of Polanski’s earliest efforts are contained almost entirely within their actors—feeble, hateful animals who claw at one another in jaundice as if to hasten some wishful metamorphosis that never occurs. As both a loosening of the triangular, psychic apparatus-like tidiness of Knife in the Water and a more concrete exploration of Repulsion’s obliquely trans-Atlantic cultural anxiety, Polanski’s tertiary movie now appears a crucial turn outward for the auteur. Taken as the culmination of a casual trilogy with its two predecessors, the film’s vaguely noir elements and nervously coiled cast form a jazzy, maybe even dopey riff on how angst can manifest itself interpersonally—in the strained space between bodies as well as within the bodies themselves.

The loping, Pinter-esque storyline has a gravelly throated American gangster, Dickie (Lionel Stander), seeking refuge with his badly wounded, ethnic caricature of a partner (Jack MacGowran) in the unlikely setting of Northumberland’s stately, rural coastline; they happen upon a vintage castle inhabited by an effete, retired baldy, George (Donald Pleasence), and his sultry, condescending French wife, Teresa (Françoise Dorléac). After hiding out in their chicken coop for a day, Dickie reveals himself and cursorily takes control of their lives, though the pitiful resistance they display requires only a modicum of strong-arming to supplant.

Most of the anonymous male Brits in Repulsion seem designed to provoke the titular reaction; shot in hallucinogenic close-ups, they exude a repugnantly sniveling lechery. The masculine counterpart in Cul-de-Sac’s cross-Channel couple matures that prurient grotesqueness into a listless impotence that wants for nothing; George lords over his marital configuration with permissive, “aw, shucks” anhedonia. Teresa spends her days “shrimping” with local beaus in tide pools, stripped sexily down to her jeans, with no recognizable objections from his end. In the evening, she laughs at her husband’s gawkiness, forcing him to don nightgowns and mocking how easily he can be emasculated. Her decapitation of the ostensible “head” of the household—she’s much too indolent to be bothered with domestic trivialities—has, however, driven them to a poetic asceticism rather than invited emancipated luxury, especially where food is concerned. (Near the start of the film, George feebly attempts to make an omelet but breaks two eggs on his way to discovering that the frying pan has gone missing; in another scene, Teresa defenestrates a pot of coffee that Dickie forces her to make.) Chickens roam like dumb totems about their shriveled, ruins-like estate, roosting on verandas and pecking at meals left to crust over in the salty English sun, uneaten.

Dickie’s arrival momentarily focuses the two. They’re prodded at gunpoint out to a road washed over by high tides where the criminals’ car had been parked, and they later dig a grave for Dickie’s moribund partner while downing homemade vodka and complaining about the lack of spontaneity in their lives. The reluctant, ulcer-riddled George is forced—again at gunpoint—to join the bacchanalia; after drinking deeply of his wife’s alcohol, his face contorts with terrifying, orgasmic violence. Teresa alternates between willing and recalcitrant hostage with a coquettish role play-ism that bristles against Dickie’s far more expedient aggression: A hefty, surly stereotype, he engages in the political ménage-a-trois that develops with grimaces and constant reminders of the Beckett-phantom-like boss that will surely come to retrieve him soon. (He wants desperately to believe that his desire to complete their human tricycle is oriented around the three-way’s ability to carry him to safety.) But this expedience swiftly frays at the edges. After digging his partner’s grave, Dickie and Teresa drunkenly use the plot to humiliate George; they toss him in alongside an outdoor chair and heap soil upon his meek body while the partner lounges facedown in the grass, stiffened and swaddled in sheets.

Dickie’s antics in the castle coincide with changes in the film’s visual tone as well; though the script suggests a kind of plein-air chamber drama, Cul-de-Sac’s cinematography, by Polanski and Gilbert Taylor, evinces a feverish otherworldliness, interpreting the oceanic countryside as a volatile psychoscape of desultory tides and light-squashing marine layers. Dickie’s gray silhouette, barely visible against a cloudy marine layer, barks orders down to the beach from a rooftop perch at twilight; when the getaway car gets stashed in the chicken coop, Polanski shoots from behind the birds’ roosts, the vehicle headlights glowing by feathery backsides like radioactive eggs. As the characters reveal more and more of their tangled selves to one another, the black and white’s dreaminess intensifies, as though protecting the rawness of their emotions with isolating oneirism. On his knees in the sand, George lets loose a pathetic monologue—in a single, lengthy, unbroken medium-wide take—about having emptied his coffers to live in futile solitude like Raleigh; the obvious flood lights that make him and Dickie visible against the coast’s voracious dimness interject the scene with a flat artifice. It’s as though the two are a graphic afterthought to the landscape.

The film’s surreal humor occasionally feels too on-the-nose, from the conceptual entrapment of the title to the bloated third act wherein George and Teresa are visited by friends and have to inconspicuously interpolate Dickie’s menacing presence into their dull day-to-day lives. (They start out by casting him in the role of gardener-cum-butler, but his pancake-y face and brusque colloquialisms out him swiftly.) And the sweltering climax, though conceivable as a snapping of George’s unmanly pathology, is structurally undeserved; the fiery resolution doesn’t suit the glacial nature of the central conflict. But Polanski, ever the storytelling imp, provides us with enough slaphappy denouement foreshadowing to make the conflagrating slide seem earned. In the penultimate scene, Teresa goofs with Dickie’s sleeping body, placing newspaper scraps between his toes and taking a lighter to them. “It’s called bicycle,” she says, grinning, when he’s singed awake and yelping. “You like?” He chases her down, tears off his belt, and lashes the smooth backs of her legs. “It’s called a lout,” he growls. “You like?”

The exchange is a microcosm of Cul-de-Sac’s taunting universe: a burn and a whip, leaving marks behind that signify nothing but the universality of boredom that sets in even after being shot, even after buying a castle. The inevitability of ennui is their worse-than-death fate.

Returning to the alienating landscapes and seascapes that endowed Knife in the Water with a paradoxically exposed claustrophobia, Cul-de-Sac features perhaps Roman Polanski’s most immaculately realized black-and-white palette. He and Gilbert Taylor create a surreal world of flickering grayscale, the nuance of which is marvelously enhanced by Criterion’s 1080p transfer. The beach scenes probably fair the best due to the aforementioned flatness of the harsh lights atop the pitch black of the distance; the planate film grain seems to coruscate with desperation. The uncompressed audio is mixed smartly, with the creepily beach-house farfisa organ music always seeming one or two volume knobs twists too loud.

Criterion’s supplements are fairly meager on this release. The featurette made in 2003, with testimony from Polanski, Taylor, as well as producers and set designers, is notable primarily for a slew of production anecdotes. (For example: The casting of Françoise Dorléac was an 11th-hour order, and due to restrictions in England, the film was nearly shot in Yugoslavia, much to the chagrin of Polanski, who refused to produce the same script anywhere else.) There’s also a lengthy television interview from 1967 that captures a more thickly accented, devilishly young Polanski in a self-reflective mood; after describing his estrangement from his parents during WWII, he goes on to cite Walt Disney’s Snow White and the Seven Dwarfs, one of the first films he remembers seeing at the theater, as an indelible influence. The segment sadly peters out into a farm of glossed clips halfway through.

A violent spoof of social dead-ends blisters beautifully on Blu-ray.

Blu-ray Review: Stanley Kubrick’s The Killing on the Criterion Collection