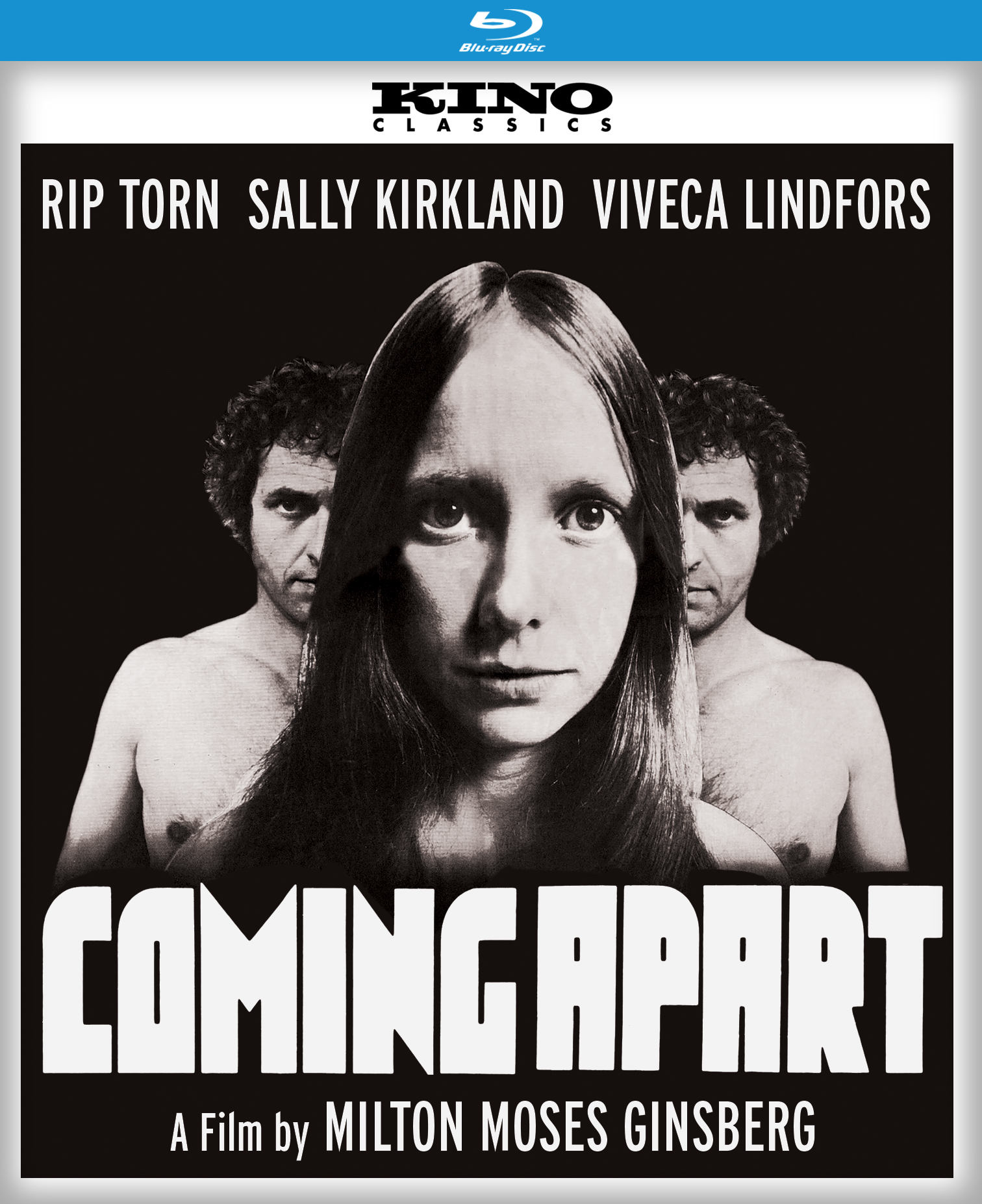 Unlike McBride, though, Ginsberg often tinkers with the medium of film itself, using techniques like flash frames and supposed mechanical breakdowns to deny viewers access to key material that otherwise might help flesh out things like a narrative sequence of events and even character motivation. In this way, Coming Apart functions as what Umberto Eco calls an open work, one that requires viewers to actively participate in the production of its meaning.

Compositionally, what we see throughout Ginsberg’s underground film is limited to a couple of pieces of furniture and a wall-sized mirror that reflects a good part of Joe’s loft apartment. The mirror also helps to generate some much-needed visual novelty. Depending on how characters are positioned around the room, there’s the effect of a two-shot or a long shot. And, on several occasions, someone physically repositions the camera, which is situated inside a mirrored box that Joe at one point ironically refers to as “a kinetic art object.”

We slowly piece together that Joe has taken this apartment, under the assumed name of Glassman, in the same building where his former lover, Monica (Viveca Lindfors), resides. Though he claims that he loves her, Monica makes it clear that she wants nothing to do with him. What follows are a number of scenes where Joe invites women to his pad for amorous trysts of varying degrees of explicitness. Though Coming Apart was originally rated X, these encounters never go any further than the lightest sort of softcore; however, their ramifications for Joe’s mental state are what’s really of foremost importance. Possibly the most jarring episode is where Joe makes love to a young mother, Anita (Lynn Swann), at the feet of her baby carriage, while the infant squalls pathetically for its mother.

Joe’s only intense relationship (and one of the few that recurs throughout the film) is with his former patient, Joann (Sally Kirkland). It’s fascinating to watch as the balance of power shifts back and forth between them, while the range of emotions on display ranges from curiosity and desire to eventual acrimony and contempt. With so little to distract attention from the performances, it’s commendable that Torn and Kirkland expertly chart these micro-changes of tone and mood—not to mention, in unbroken takes that often last five minutes or longer.

More than merely an aesthetic prop, the centrally placed mirror in Joe’s apartment doubles as a metaphor for Coming Apart itself: a medium of reflection for a character caught in the throes of existential doubt and malaise. It’s hardly coincidental that the names Glazer and Glassman both have to do with mirrors. Since the camera sits inside a mirrored box, the film is essentially a mise en abyme. Call it an abyss, too, and Joe certainly falls into it by film’s end. His absence in the final scene no doubt bodes ill, especially as what we do see is Joann freaking out, smashing up the place, and waving around a handgun. Not surprisingly, the final shot shows the mirror being smashed. As Yeats knew all too well, “Things fall apart.”

Kino Lorber presents Coming Apart in a new 2K restoration that looks fantastic. The crisp black-and-white cinematography by Jack Yager is clean and clear. The only damage on display are the random bits of distress that the filmmakers deliberately employed for the sake of verisimilitude. The English LPCM 2.0 track is fairly sturdy, though some of the dialogue can be a bit hard to discern, so the SDH subtitles definitely come in handy.

Extras include two short films by Milton Moses Ginsberg: Milonga in a Lonely Station, which shows two dancers performing to the music of Astor Piazzolla, and the longer and denser Kron: Along the Avenue of Time, a fascinatingly abstract meditation on time and existence set to a selection of classical music, and featuring a number of film clips from world cinema. Elsewhere, there are several interviews with the filmmaker. The most comprehensive of them is a half-hour intro and Q&A from a 50th anniversary screening of Coming Apart at the Metrograph, covering his inspirations, shooting techniques, appreciation of the actors, and the film’s reception and subsequent reappraisal. An interview with French TV from 2004 is most novel for having Ginsberg field questions while reflected in a mirror. Finally, Ginsberg shares some warm remarks about working with Rip Torn at a memorial filmed at the Actor’s Studio in 2019.