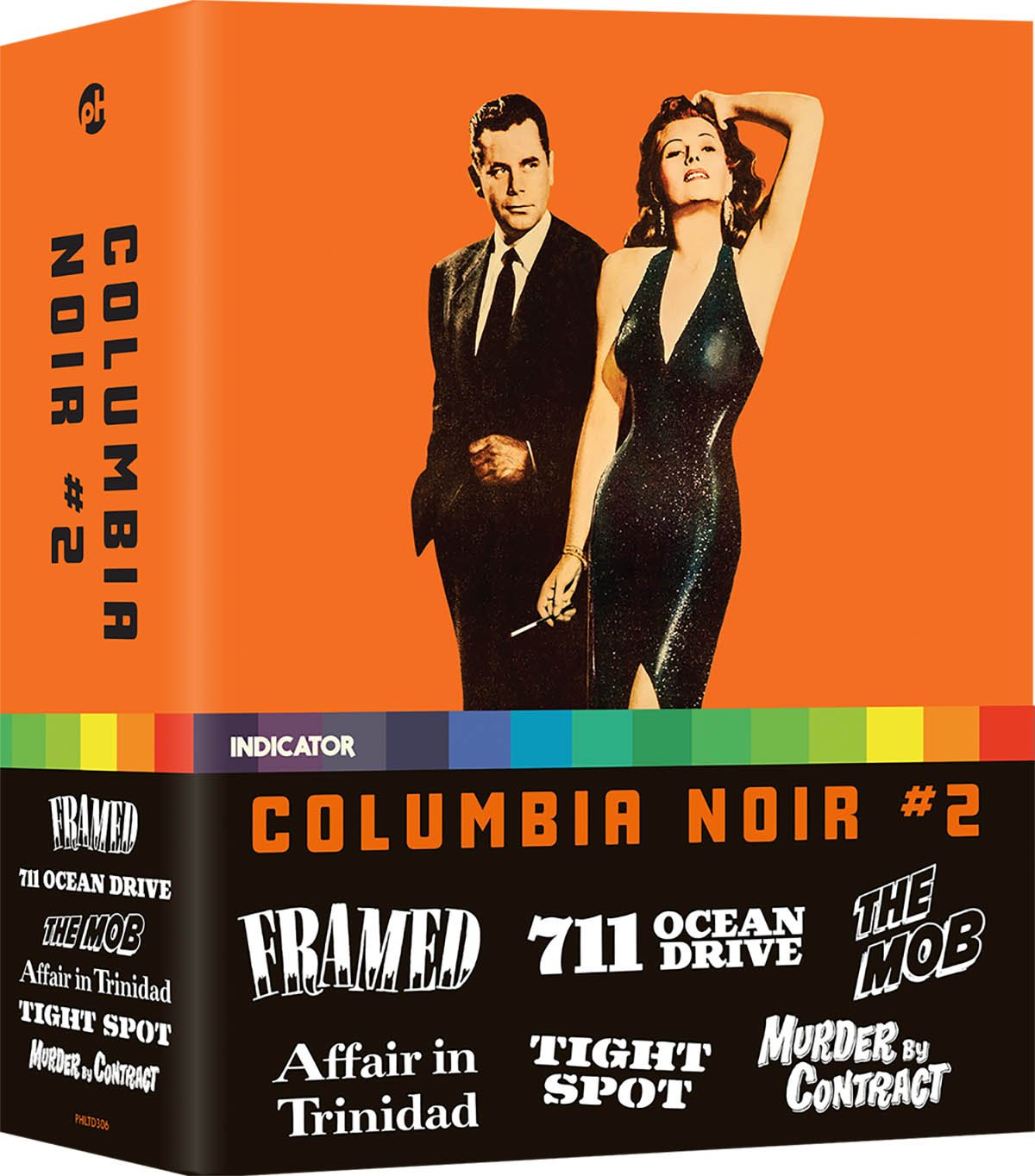 In her introduction to the Criterion Channel’s Columbia Noir collection, critic Imogen Sara Smith asserts that it’s an avoidance of “cookie cutter” plots and a tendency to reflect “the whole scope and diversity of what film noir could be” that sets Columbia Pictures’s noirs apart from those of other studios. And the adventurousness of the studio’s output is amply clear throughout the six films collected on Indicator’s second Columbia Noir box set, in everything from Ginger Rogers’s against-type turn as a sassy, hard-nosed convict in Tight Spot to Perry Botkin’s wildly unconventional, solo guitar score for Murder by Contract.

These films tell stories that are rife with deception, jealousy, betrayal, and suspicion, fixating on jaded, world-weary souls who are seemingly either tightening the screws on someone or working themselves out of an insurmountable jam. But where the tortured emotions and sense of dread felt by these characters are familiar staples of noir, even the weakest films here find unique and exciting ways of tackling their hard-boiled stories, thus allowing them to stand apart from their genre brethren.

The most offbeat of these works is 1958’s Murder by Contract, which bears the strong imprints of a late-period genre entry. Irving Lerner’s film is a B picture through and through, one that uses its limited means to its advantage; given its lean plot, minimalist score and set design, and Vince Edwards’s stony lead performance, it’s as if a Bresson film has been re-imagined through the lens of a Jean-Pierre Melville neo-noir, then spiked with deadpan humor. Playfully toying with Nietzsche’s concept of the Übermensch—references to Superman abound—across its sunny Los Angeles suburban setting, Murder by Contract efficiently probes a hipster hitman’s (Edwards) feelings of alienation, misogyny, and superiority with a cool, often uproarious wit and whimsy, while still sustaining a persistent sense of danger.

Tight Spot, from 1955, makes even more room for levity. Despite the trenchant feelings of entrapment and helplessness felt by its protagonist, the film often veers into the realm of romantic comedy, specifically when Sherry (Rogers), holed up in a hotel room waiting to testify against a mob boss (Lorne Green), warms up to the her aptly named police protector, Vince Striker (Brian Keith). These more light-hearted stretches are particularly surprising when you consider that its it’s Phil Karlson behind the camera, as he’s best known for extremely gritty, no-nonsense B thrillers like 1952’s Kansas City Confidential and 1955’s The Phenix City Story. Rogers’s delicate balancing of feminine charm and raw tenacity lends the film credence on both ends of the tonal spectrum, while an eventual twist that subtly reflects on the McCarthy-era paranoia that had just recently swept through Hollywood reveals a bit more thematic weight in the film than it initially may appear.

While far from a comedy, Robert Parrish’s The Mob, from 1951, is also laced with a distinctly off-kilter wit, offering Broderick Crawford ample opportunity to sling whip-smart comebacks and sardonic insults with a frequency typically reserved only for Humphrey Bogart. As a policeman forced to get in good with the mobsters who run things at the city docks after he mistakenly lets a cop-killer go free, Crawford plays Johnny Damico with a perfect blend of self-loathing, seething anger, and shrewdness as the man maneuvers his way through a seedy blue-collar environment where even those on the right side of the law are duplicitous. Though beholden to a dime-a-dozen scenario, the film conjures a densely atmospheric mood, and its swift pacing is perfectly in key with the fiery verbal banter that marks virtually every scene.

If the remaining films in the set play things a bit closer to the traditional noir playbook, they’re still immensely entertaining and thoughtful genre entries. Joseph M. Newman, director of 1950’s 711 Ocean Drive, breathes new life into the story of a regular joe’s (Edmond O’Brien) rise and fall in the criminal underworld with a ripped-from-the-headlines immediacy, whip-smart dialogue, and a nimble sense of pacing. Though Affair in Trinidad, from 1952, plays like a watered-down version of Gilda, for pairing Glenn Ford and Rita Hayworth again and having the actress replicate her legendary hair flip from Charles Vidor’s classic, Vincent Sherman’s film is intriguing for the way it positions Chris Emery (Hayworth) as both aggressor and pawn. Ford fairs much better in Framed, which from the opening shot that sees him careening downhill in a truck with no brakes, palpably conjures the feelings of an unhinged man as he’s squeezed from every direction. Richard Wallace’s 1947 film sees corruption and social rot as inescapable, and while it’s not the best title in the set, it’s most indicative of the typically grim worldview of many of Columbia’s noirs. The unusual melding of acerbic humor with an overwhelming bleakness is as much of a defining trait of the studio’s noirs as their uncanny ability to pack their low-budget fare with heavy ideas and stark, evocative visuals.

The high-def transfers are fantastic across the board, especially those for the two best films in the set, Murder by Contract and The Mob, both of which are premiering on Blu-ray for the first time. The contrast ratio is consistently very strong, allowing for inky blacks in the shadows and a wide range of grays that help give the films’ visuals a nicely textured look even in murkier sequences, like the rainy, nighttime murder scene in The Mob. All six films are presented with their original mono audio, and while that may come as a disappoint to audiophiles used to 5.1 surround, the mixes are nicely balanced and surprisingly robust.

Powerhouse Films typically goes all out for their Indicator series box sets, but the distributor has really gone above and beyond here. The highlight of Columbia Noir #2 is surely the newly recorded audio commentaries, each of which offers critical insights into everything from the typical qualities of a Columbia noir to the formal strategies and thematic elements of the individual films. There isn’t a single dud in the bunch, but especially of note are the commentaries on Murder by Contract, The Mob, and Framed. For the latter, Imogen Sara Smith seamlessly integrates her observations of the film, right down to its smallest details, into a larger analysis of noir, all the while peppering her astute observations with hard-boiled jargon.

Each disc also comes with a heaping of absorbing and varied extras, ranging from the standard, such as interviews and an introduction to Murder by Contract by Martin Scorsese, to the non-standard, most notably an hour of extracts from telerecordings of the U.S. Senate committee’s hearings into organized crime and Irving Lerner’s 1943 documentary short Swedes in America. Every disc also includes a Three Stooges short that was made at Columbia and echoes the themes of the accompanying film. The set is rounded out with a smattering of photo galleries, theatrical trailers, and a gorgeous, colorful 120-page bound booklet with enlightening essays by the likes of film critic Simon Abrams and film historian Melanie Williams.

This box set is a noir fan’s dream for compiling a slate of unduly overlooked films alongside an equally idiosyncratic series of extras, all served up in a handsome, sturdy package.