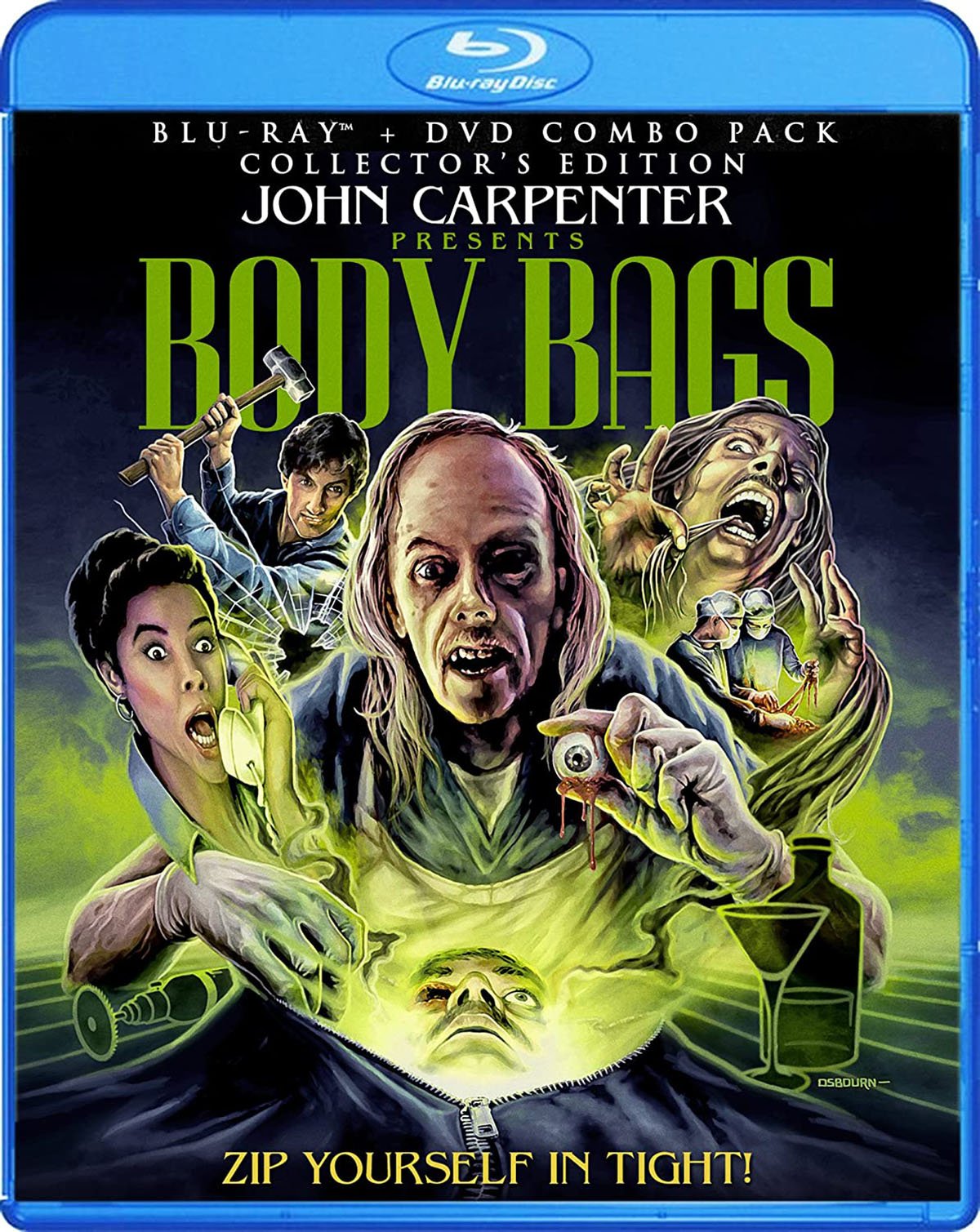 Broadcast on Showtime in 1993 as a one-off horror anthology film, Body Bags bears more than a passing resemblance to HBO’s EC Comics-inspired Tales from the Crypt, not only for its reliance on a cast cannily salted with seasoned heavyweights eager to play against type, but also for its unabashed depictions of splattery violence. Body Bags is also notable for bringing together two of modern horror’s best-known names, John Carpenter and Tobe Hooper, as co-directors. Boiled down to their bare bones, none of the film’s segments approach anything like untrammeled ground: The first unreels like an urban legend, the second is a goofy little morality play, while the third combines medical horror of the possessed-transplant variety with serial-killer psychopathology.

Then again, omnibus films by their very nature are uneven, sometimes unwieldy affairs. That Body Bags largely succeeds, despite the perceptible lack of novel material, can be attributed to the strength of the assembled performances as well as the filmmakers’ attention to the dynamics of visual storytelling. Then, too, there are plenty of ancillary flourishes (some clever insider references, more than a few surprise cameos) that will no doubt appeal to horror fans. These may seem like minor details, but therein, as we all know, resides the particular sub-devil responsible for the best in genre filmmaking.

Wraparound segments set in a morgue feature John Carpenter (all decked out in sepulchral makeup by Rick Baker) clowning it up as the Coroner, a ghoulish figure not entirely dissimilar to a certain punning Crypt Keeper. These segments lean heavily on a familiar note of mordant black humor, and slather gruesome effects work from KNB across every slab in this particularly populous morgue. For the coda, two assistants arrive on the scene just in time for the obligatory twist. Keep an eye peeled: They’re played by Tom Arnold and director Tobe Hooper.

“The Gas Station” finds newbie Anne (Alex Datcher) working the night shift at a remote filling station engulfed by a sky so black you could slash it with a machete. After helpful attendant Bill (Robert Carradine) shows her around the premises, which are pretty much restricted to one tiny glass booth, he leaves her to contend with a cavalcade of assorted weirdoes (including a memorably lecherous Wes Craven), but not before warning her about a violent killer escaped from the local loony bin. You can probably guess who that turns out to be, but the episode’s real pleasures lie elsewhere: in appearances from Craven, David Naughton (An American Werewolf in London), and Sam Raimi, and in-jokes like the burg being named Haddonfield in homage to Halloween. Carpenter keeps things brisk with an endlessly roving camera and employs some familiar tricks like having important events unfold out of focus in the extreme background.

“Hair” is an absurdist lark about Richard Coberts (Stacy Keach), a businessman who’s desperate to discover a remedy for his receding hairline. Regimens ranging from scalp massage to playing soothing music (a fantasia for fallen follicles, if you will) are all in vain, until Coberts sees an ad for the Roswell Hair Clinic run by Sy Sperling-esque Dr. Lock (David Warner). (Incidentally, if the name of that clinic triggers any alarm bells, that’s hardly unintentional.) The good doctor’s miracle cure proves all too effective, much to the initial delight of Coberts and his girlfriend (Sheena Easton), who goes gaga for her man’s luxuriant tresses—though, truth be told, Coberts mostly resembles James Earl Jones in Conan the Barbarian. In the segment’s strongest scene, Coberts unveils the new ‘do, his exhilaration mounting almost to apoplexy as he unravels the bandages, before launching into some absolutely ridiculous hair-related seduction routines—a hilarious performance delivered in one unbroken take. There’s a price to be paid for Coberts’s newfound vanity, needless to say, and Carpenter renders his grotesque comeuppance with some suitably cheesy stop-motion animation.

Helmed by Tobe Hooper, “Eye” is easily the film’s most disturbing episode. When pro ball player Brent Matthews (Mark Hamill) loses an eye in a car crash, Dr. Long (genre veteran John Agar) offers to perform a radical surgical procedure to replace it with a dead man’s eye. Just so happens that the donor was a recently executed serial killer. Pretty soon, Matthews is plagued by terrifying visions. Granted, there’s nothing exceptional in this setup. Two things, however, set the episode apart from underwhelming transplant horror like Spare Parts: Hooper’s manipulation of the material into depicting ever darker recesses of the man’s mind, which unearths some unsavory ways to conflate sex and death, and Mark Hamill’s intense and increasingly unhinged performance, a far cry from the unambiguous heroics of Luke Skywalker. True, the script is way too obvious about cribbing its sick-joke punchline from scripture, and the resolution unambiguously restores the fabric of moral order, but, if only for a few moments there, the ferocity of Hooper’s masterwork, The Texas Chain Saw Massacre, is fully on display. And that’s reason enough to relish this nasty little morsel.

Body Bags is presented in 1.78:1, which is close enough to the 1.85:1 ratio it was initially shot in, rather than the boxy 4:3 Academy ratio in which it was broadcast on Showtime. The image is crisp, nicely detailed, and almost entirely free from defects. Colors are vibrant and densely saturated. The black levels, so vital to the efficacy of the “Gas Station” segment in particular, are completely uncrushed. Body Bags comes with two Master Audio options: a 5.1 surround and 2.0 stereo mix. The surround track isn’t overly demonstrative, but it does well by the eerie synth score (co-written, natch, by John Carpenter), which features a handful of surprisingly effective stinger cues, as well as some of the sound effects like the tintinnabulation of shattered glass.

“Unzipping Body Bags” is an entertaining 20-minute featurette with comments from Carpenter, producer Sandy King (also Carpenter’s wife), and actors Robert Carradine and Stacy Keach. Carpenter talks about playing the Coroner in full makeup, his dislike of the anthology format in general, and the decision not to make Body Bags an ongoing series. Sandy King discusses being sent the initial script and handing it over to Carpenter for appraisal. Carradine and Keach mostly chime in about how enjoyable their participation in the project was. The commentary track is something of a Frankenstein monster that’s been stitched together from separate recording sessions (thus the first segment with Carradine was obviously recorded after the one with Keach). Though the discussion involves the same set of participants as the featurette, and covers some of the same ground, it’s nevertheless an often engaging and usually informative listen.

A better-than-average horror anthology from two of horror’s reigning masters, Body Bags benefits considerably from an HD upgrade that’s been fleshed out with some salient supplements by Shout! Factory.