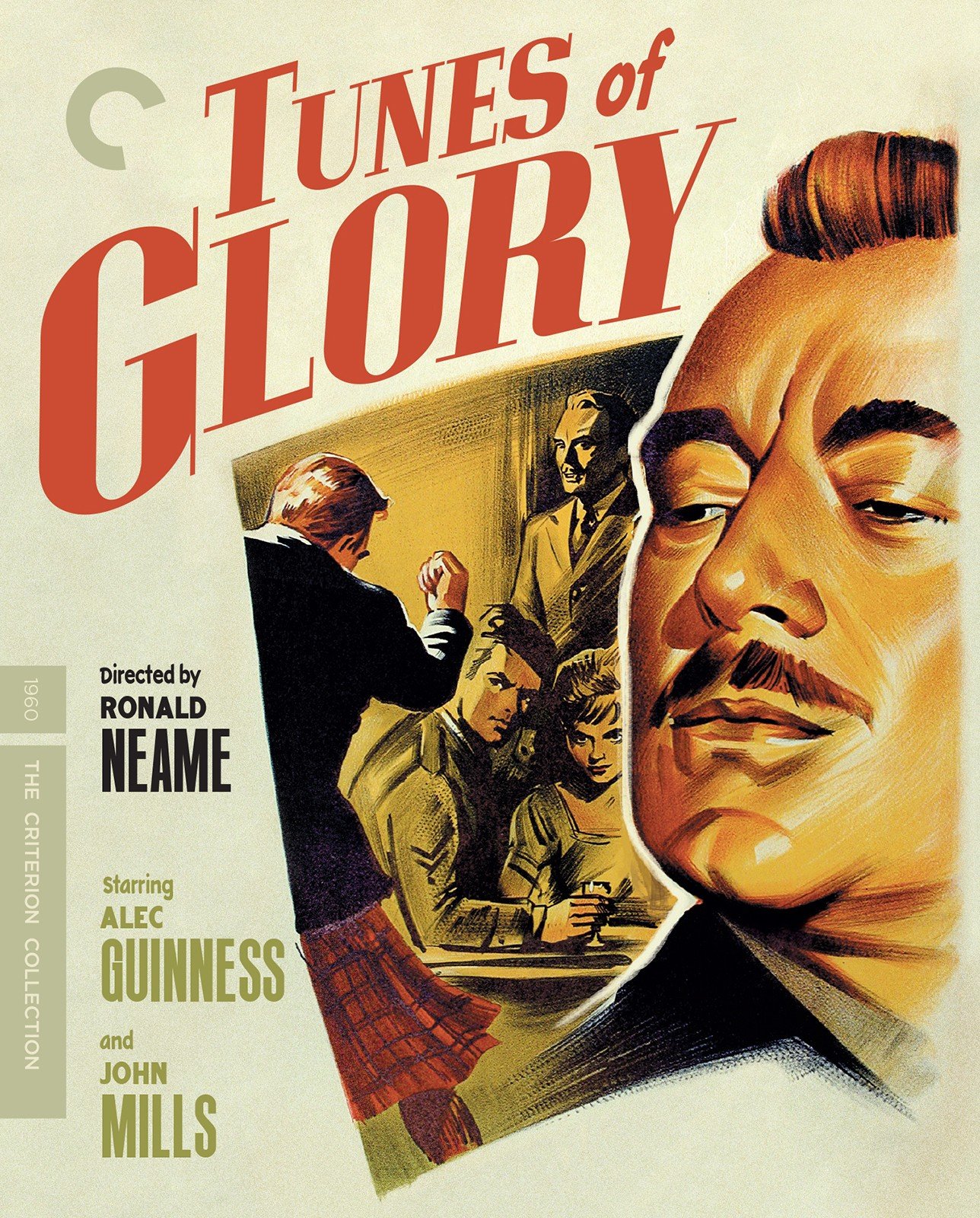 Toward the end of Ronald Neame’s Tunes of Glory, Jock (Alec Guinness), the acting commanding officer of a Highland regiment, and Colonel Barrow (John Mills), the man sent to relieve him of his position, discuss the vital importance of the “idea” behind the long-standing, highly regarded unit they oversee. Their starkly opposing views on this matter, particularly in regard to decorum and discipline, sparks a clash of personalities that propels the film’s narrative, leading to a protracted battle of wills that puts the leadership skills of both men to the test.

The jovial Jock, all too willing to color outside the lines when it comes to enforcing arbitrary regulations, runs his regiment with a keen attention toward brotherhood, frequently joining his subordinates for a rowdy night of drinking and dancing. All the while, he still manages to retain a distinct respect from those he commands. Barrow, on the other hand, is fresh out of Oxford and full of ideas learned not from commanding men, but from reading books. As Jock bristles at his unpopular demotion to second in command, Barrow steps in to sideline his predecessor’s chummy, communal approach to leadership in favor of a culture of rigorous discipline and practice.

Neame presents these two methods—warmth and camaraderie on one side, cold and methodical command on the other—as antagonistic forces, leaving Guinness and Mills to fill in the more subtle shades of their characters’ psychological makeups. Guinness, in particular, is up to the task, walking the thin line between petulance and ebullience that makes it abundantly clear why Jock’s men adore him so, while also allowing us to see why the officer’s headstrong behavior would so deeply infuriate the stiff-upper-lipped Barrow, who unwittingly walked into the lion’s den when he took Jock’s position.

In many ways, the film’s central ideological conflict is analogous to that of Dead Poets’ Society, another film where a leader’s unconventionally egalitarian methods defy the principles of draconian discipline. And as in Peter Weir’s film, Tunes of Glory’s professed support for its much-loved, rabble-rousing underdog ultimately proves to be illusory. After Jock punches a younger officer who was dating his daughter (Susannah York) behind his back, the film’s championing of the idiosyncratic leader and all of his shenanigans begins to wane. And the sobering final act that follows so strongly undercuts the gleefully rebellious tone of the rest of film that it’s difficult to see this diminishing reverence toward Jock as anything but an outright repudiation of his seemingly effective and more humane methodology.

In fact, Jock’s moral and disciplinary flexibility is tacitly acknowledged as the indirect cause of another man’s suicide, leading to a final rallying cry that plays not only as a show of respect for a fallen soldier and fellow man, but a plea for a return to the rigid order and unquestionable obedience that’s typical of elite military units. In abruptly changing its perception of Jock, and everything he stands for, Tunes of Glory takes an uncouth turn—one that sees Jock embracing the very ideals he’s been fighting against, and the celebration of individuality that colors much of the film fades in favor of a tonally jarring cautionary tale of the underlying dangers of straying from the strictures of institutional rules and regulations.

Criterion’s transfer of Tunes of Glory on their 2004 DVD release was one of their weakest of the early-to-mid aughts, so the 4K restoration that serves as the source here is an obvious improvement. There’s far more detail in the frame this time around and the image is notably brighter, leading to a more natural rendering of skin tones and correctly balanced whites. Still, while the picture is less murky, colors are generally a bit washed out across the board, and there’s a softness to a number of scenes, particularly exterior ones, which have an overly brown, earthy hue to them. The monaural soundtrack is fairly clean, with not much to complain about aside from an intermittent echoey quality to some of the dialogue.

Criterion has opted for a straight port of the extras from their meager 2004 DVD release of Tunes of Glory. The only two video features are interviews with Alec Guinness and director Ronald Neame. Guinness is quite reserved and careful in doling out anything too personal, but discusses his early years in theater and how he eventually came around to embracing film, which he’d long seen as an inferior art form. Neame is a bit more candid, sharing a few choice stories of the friendly competition between Guinness and co-star John Mills on the set and of the actors’ struggles to learn how to properly walk and sit in their kilts. Also included is a brief audio interview with Mills, who dryly, and somewhat evasively, recounts his experiences working with Guinness and Neame and discusses how his performance in this film differs from those he gives in the numerous other war films he appeared in. In his booklet essay, film scholar Robert Murphy lauds Guinness and Mills’s central performances while unpacking the reasons for Tunes of Glory’s diminishing stock as a British classic.

Criterion’s Blu-ray upgrade of Tunes of Glory is an improvement over their 2004 DVD release, but it’s still more than a bit off-key.