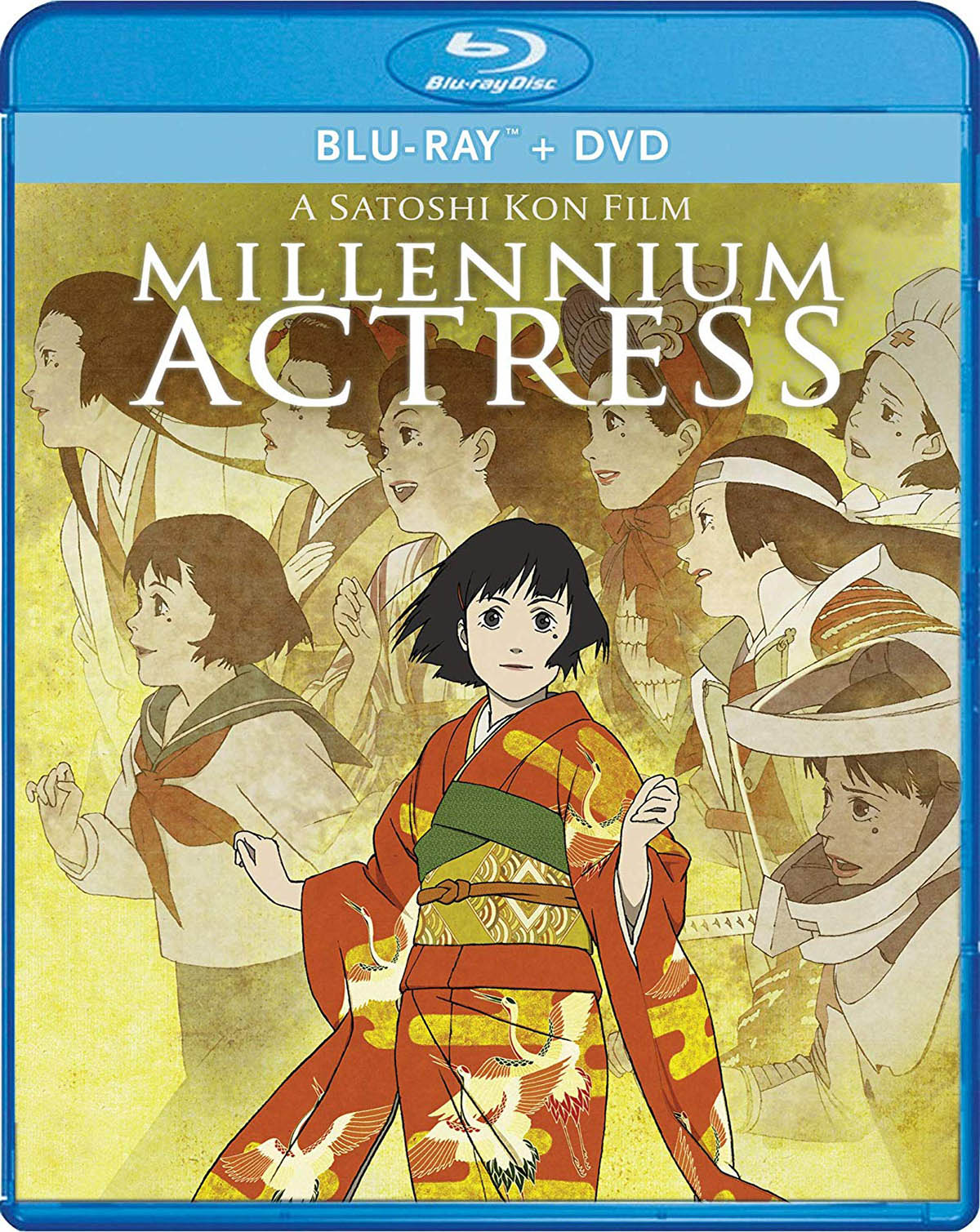 Behold Millennium Actress, Satoshi Kon’s anime answer to Mulholland Drive. This radical work by the director of Perfect Blue mainlines into a cosmic crawlspace between reality and fantasy from which it never leaves. Kon’s love for his animated diva is supreme and he plays her romantic saga for delirious world-weary sorrow. The genius of Millennium Actress is infinite: the practically monochrome palette that slowly saturates color as the film moves forward in time; the meta-cinematic conceits Kon employs in order to have the film’s male documentary filmmaker penetrate what’s supposedly an older Japanese actress’s recollection of her own past; and the countless rhetorical shifts that evoke the woman’s projection of her romantic melodrama onto her art.

When a two-man documentary crew discovers the whereabouts of the reclusive Chiyoko Fujiwara, the legendary actress explains how her career in cinema ran parallel to her search for an elusive love. (The documentary filmmaker’s invasion of Chiyoko’s memory is dubious at first, but Kon soon reveals the man’s own romantic involvement in the actress’s life.) Despite her mother’s conservative wishes, a young Chiyoko is handpicked for stardom by a film studio that now lies in ruin. That fateful day, a mysterious young artist bumps into the girl while fleeing from a police officer with a hideous scar on his face. She falls in love with the boy but he disappears soon after meeting her, leaving behind only a mysterious key. For the rest of her life, she’s left to search for this “human-rights agitator” whose name she doesn’t even know.

Throughout much of her early career, Chiyoko performs with an older actress who doubles for Chiyoko’s two female enemies: the mother who almost denied her a career in cinema and the witch who may or may not have damned her to 1,000 years in the throes of eternal love. While in Manchuria shooting a film, she looks for her lover in order to give him his key. While on the set of a chamber drama, she discovers that her part also has her looking for a missing lover. During time off from production, she journeys through war-ravaged Manchuria in search of the activist. When her train is ravaged by bandits, she steps through one door and reemerges on the set of a lavish samurai epic that finds her trying to negotiate the arrows of Manchurian warlords. And Kon evokes these ravishing passages between Chiyoko’s reality and on-set fantasies often with as little as a superimposition or a mere door opening and closing.

Earthquakes and wars are serendipitously spun into the film’s many dual realities, and rubble is Kon’s metaphor of choice. From the fierce Edo-period samurai epic to the final space odyssey Chiyoko shoots before retiring from the screen, Millennium Actress’s many film-within-a-film set pieces give Chiyoko’s never-ending search for love various historical, political and cultural contextualizations. Hers is very much a tale of perseverance, so maybe this sweeping perspective is Kon’s way of celebrating the defiant Chiyoko’s power over various manmade creations and destructions in the film. Because her ability to project her emotional trauma onto her roles is so strong, it’s that much more difficult to distinguish between Chiyoko’s reality and Kon’s historical recreations.

Like Mulholland Drive, Millenium Actress concerns itself with our love affair with women in movies, many of whom are unceremoniously forgotten when they become too old. Here’s a love story that not only spans a lifetime but thousands of years of political upheavals. Kon offers several hints throughout the film that Chiyoko’s millennium sentence may be hysterically self-imposed, which makes the film’s cosmic to-the-moon sequence that much more powerful. Perhaps Chiyoko knew all along that she was chasing the shadow of a man, and as such the thrill she derives from the chase suggests she’s experiencing love vicariously through her acting. Indeed, Millennium Actress is very much a love poem to cinema itself. And Kon’s love for the medium, like Chiyoko’s eternal search, has no boundaries.

Millennium Actress arrives on Blu-ray with a revelatory restoration, which blows every prior standard-def release of the film out of the water. The film’s thick line animation now boasts razor-sharp textures. Colors pop with intensity, particularly those recurring splashes of bright orange on everything from street signs to movie-prop spacesuits, while the more naturalistic hues are well contrasted. Shout! Factory includes a lossless 5.1 track for both the original Japanese track and an English dub, both of which ably mix the film’s complex sound design, as well as Susumu Hirasawa’s tense and ever-pulsing electronic score, across all channels, truly heightening the film’s paranoiac obsession with the blurring of reality and acting.

This disc comes with a series of interviews, including separate talks with English-language voice actors Abby Trott and Laura Post. No interviews with the Japanese cast are included, and at first blush it’s a bit disappointing to only hear from members of the dub cast, but both actresses prove to be informative and engaging as they discuss their love of the project and what spoke to them about the characters and themes. Post in particular dives deep into her inspirations and her interpretation of Eiko’s complexities. Meatier still is the interview with producer Masao Maruyama, who speaks at length on everything from the production’s beginnings all the way through its re-release. Having worked with Kon across several projects, he offers keen insights into the director’s work and personality, even comparing Kon to the character of Chiyoko. A briefer interview with producer Taro Maki more specifically cover’s Millennium Actress’s 4K restoration while also making note of the then-innovative methods that were used to blend hand-drawn and 3D animation for the film.

Millennium Actress, Satoshi Kon’s landmark feat of Japanese animation, at last receives a home-video release worthy of its beauty with this presentation of a new 4K restoration.

Review: A Letter to Momo