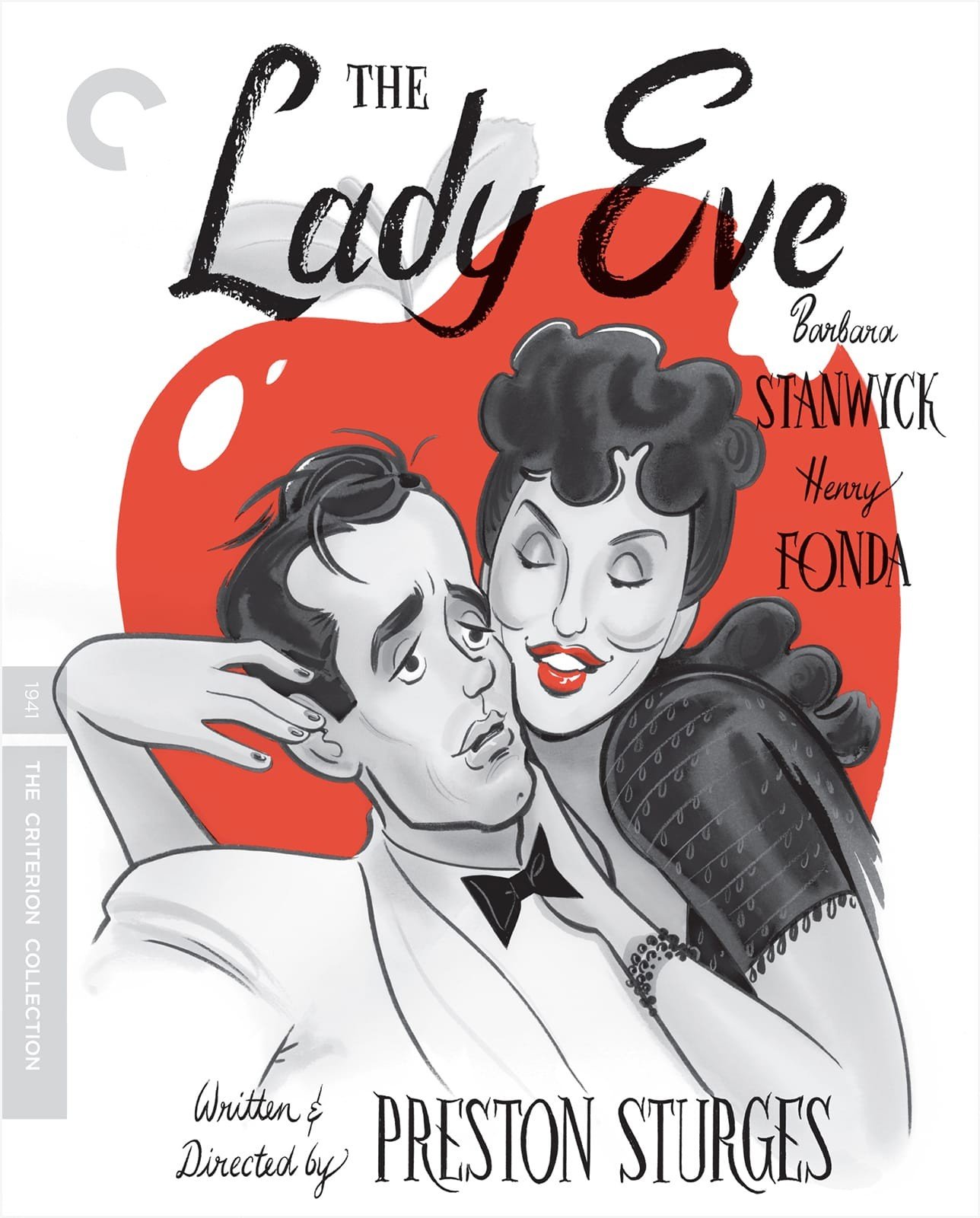 With The Lady Eve, Preston Sturges casts a cool eye on that evergreen wellspring of endless comedies: the battle of the sexes. Only he flips the usual script, giving the advantage to his female lead, allowing her to be in the know and in control, whereas her tightly wound love interest remains hapless and often hopeless through practically the entire film. That Sturges never condescends to his characters, imbuing even the smallest role with nuance and a delightful lived-in quality, speaks to the writer-director’s urbane and egalitarian philosophy of life.

The film’s first half concerns the burgeoning shipboard romance between stuffed-shirt Charles Pike (Henry Fonda), amateur ophiologist and heir to the Pike Ale fortune (“The ale that won for Yale”), and pert Jean Harrington (Barbara Stanwyck). As it happens, Jean is part of a group of con artists that includes her card-shark father, “Colonel” Harrington (Charles Coburn), and their wily partner, Gerald (Melville Cooper). Sturges cleverly, and often hilariously, parallels the process of Jean inveigling Charles and the trio attempting to swindle him. After Charles barely manages some sleight of hand, witness the sarcastic delight with which Jean informs her father: “Oh, he does card tricks, too!”

One of the most brilliant scenes in The Lady Eve unfolds when Jean first glimpses Charles across the ship’s crowded dining room. Viewing events in a compact mirror that comes to stand in for the film frame, Jean starts offering a running commentary on a series of risibly futile bids for Charles’s attention, before actively “directing” the action herself. The sequence plays as though Sturges ceded control over his film to one of its characters—at once a perfectly natural bit of business that illustrates Jean’s insight into human behavior and a wonderfully postmodern-ish commentary on the mechanics of feminine seduction. (In a nifty bit of cinematic intertextuality, Brian De Palma would appropriate the title of the book that holds Charles’s rapt attention, Are Snakes Necessary?, for his recent Hard Case Crime novel.)

Charles’s credulity is more than matched by the cynicism of his bodyguard, Muggsy (William Demarest), who soon ferrets out Jean and company’s true agenda. In an unexpected moment of cruelty, Charles tells a devastated Jean that he’s been on to her the whole time—a reversal of fortune that sets in motion the film’s second half, in which Jean will assume the identity of Lady Eve Sidwich in order to exact her revenge on Charles and his family in the form of a marriage proposal. Stanwyck’s makeover from Jean to Eve is remarkable: The clothes, of course, are different, in keeping with Eve’s more exalted status, but so, too, is her deportment, every gesture and tilt of the head, not to mention one terribly unsteady British accent.

In a hilariously circular bit of “psychology,” Charles explains to Muggsy how Eve can’t possibly be Jean, despite the uncanny resemblance, because they’re so physically similar that they just have to be completely different women. Just as earlier Charles couldn’t quite put his finger on the difference between beer and ale, even though “they’re nothing alike,” this scene likewise taps into the opposition between similarity and difference that runs throughout the film. Stacked atop that antagonism is the similar (but different) one between reality and appearance, how characters are taken at face value to be what they seem. This lies at the heart of the con artist’s modus operandi. If you can’t tell the difference, then you’re a “mug,” which makes it doubly ironic that Muggsy is the only one who does notice.

A lot of the dialogue in The Lady Eve skirts the censure of the Hays Office, but it’s still a wonder that they allowed the scene where Eve delays the inevitable honeymoon consummation by regaling Charles with fabricated accounts of her dalliances with other men. And Sturges externalizes Charles’s mounting distress in the increasingly foul weather besetting the train the couple is on. “Keep your head in,” advises a passing sign, which seems like excellent advice. Charles absconds as soon as the train’s in the station, but Eve feels no elation at her revenge, only sadness. The moment she slowly lowers the curtain on the end of their relationship is a perfect encapsulation of Sturges’s psychological acuity.

But The Lady Eve is a comedy. And so Charles and Jean meet cute (again) during a pratfall that literalizes the “fall of man” betokened in the film’s animated opening titles, where a top-hatted serpent contentedly slithers around the fateful apple. As Charles so often proves, you have to fall before you can find your feet. With Jean to guide his steps, they pick up right where they left off. Except for the niggling detail that they’re both married, and Charles remains oblivious to the fact that both of these women are, as Muggsy observes in the film’s final line, “positively the same dame.” We’re left to wonder: Will Charles ever learn the difference?

Criterion’s 4K restoration of The Lady Eve was made from a master positive print, rather than an original camera negative, so you can expect some variations in image density, with slight fading here and there, and the occasional artifact evident. Notwithstanding these comparatively minor defects, the transfer looks mighty impressive overall. Compared to Criterion’s 2001 DVD edition, there’s a significant uptick in clarity and depth, especially noticeable in the fine details of background décor, not to mention Barbara Stanwyck’s frequently changed costumes. The 1080p image is also brighter and reveals more information along the edges than the DVD. The LPCM mono track can get a little shaky at times in the upper registers, but Preston Sturges’s rapid-fire dialogue comes across crisp and clear, and Charles Bradshaw’s score sounds better than ever in the uncompressed mix.

Criterion’s Blu-ray carries over the bonus materials from their earlier DVD, as well as offers several choice new supplements. There’s an on-camera introduction from 2001 by filmmaker Peter Bogdanovich, who praises The Lady Eve as one of the great screwball comedies, discusses the origins and highlights of the genre, and mentions that Sturges preferred to act out his scripts while dictating them to his secretary, rather than writing them down in a more conventional fashion. In her audio commentary, also from 2001, film professor Marian Keane delivers an incisive reading of the film as a prime example of what philosopher Stanley Cavell calls a “comedy of remarriage.” Keane proves she has a keen ear for teasing out the implications of The Lady Eve’s double entendre-laden dialogue.

A new video essay from David Cairns titled “The Lady Deceives” delves into Sturges’s working methods, the changes he made to Irish playwright Monckton Hoffe’s original story, and the inestimable contributions of Sturges’s stock company of memorable character actors. Cairns also mentions a fascinating connection between Sturges and notorious occultist Aleister Crowley, which he then deploys metaphorically to explain the “magic and alchemy” of Sturges’s films. Also new to the Blu-ray, “Tom Sturges and Friends” is a round-robin Zoom chat hosted by Sturges’s son and biographer, along with film historian Susan King, critics Kenneth Turan and Leonard Maltin, and filmmakers Ron Shelton, James L. Brooks, and Bogdanovich. Their discussion is replete with all the conversational pleasures and technological frustrations you’d expect from this sort of an endeavor in the time of Covid-19.

Also included is a Lux Radio Theatre version of the film from 1942 with Barbara Stanwyck and Ray Milland filling in for Henry Fonda. As usual with these adumbrated adaptations, it has more historical value than anything else. For completists, there’s an audio-only recording of “Up the Amazon,” the opening song from an unproduced stage musical based on The Lady Eve. The illustrated booklet contains an incisive essay from critic Geoffrey O’Brien on Sturges’s film career and a 1946 profile of the filmmaker from Life magazine.

The Taste of Tragedy: Douglas Sirk’s All I Desire and There’s Always Tomorrow

Review: Byron Haskin’s The War of the Worlds on Criterion Blu-ray