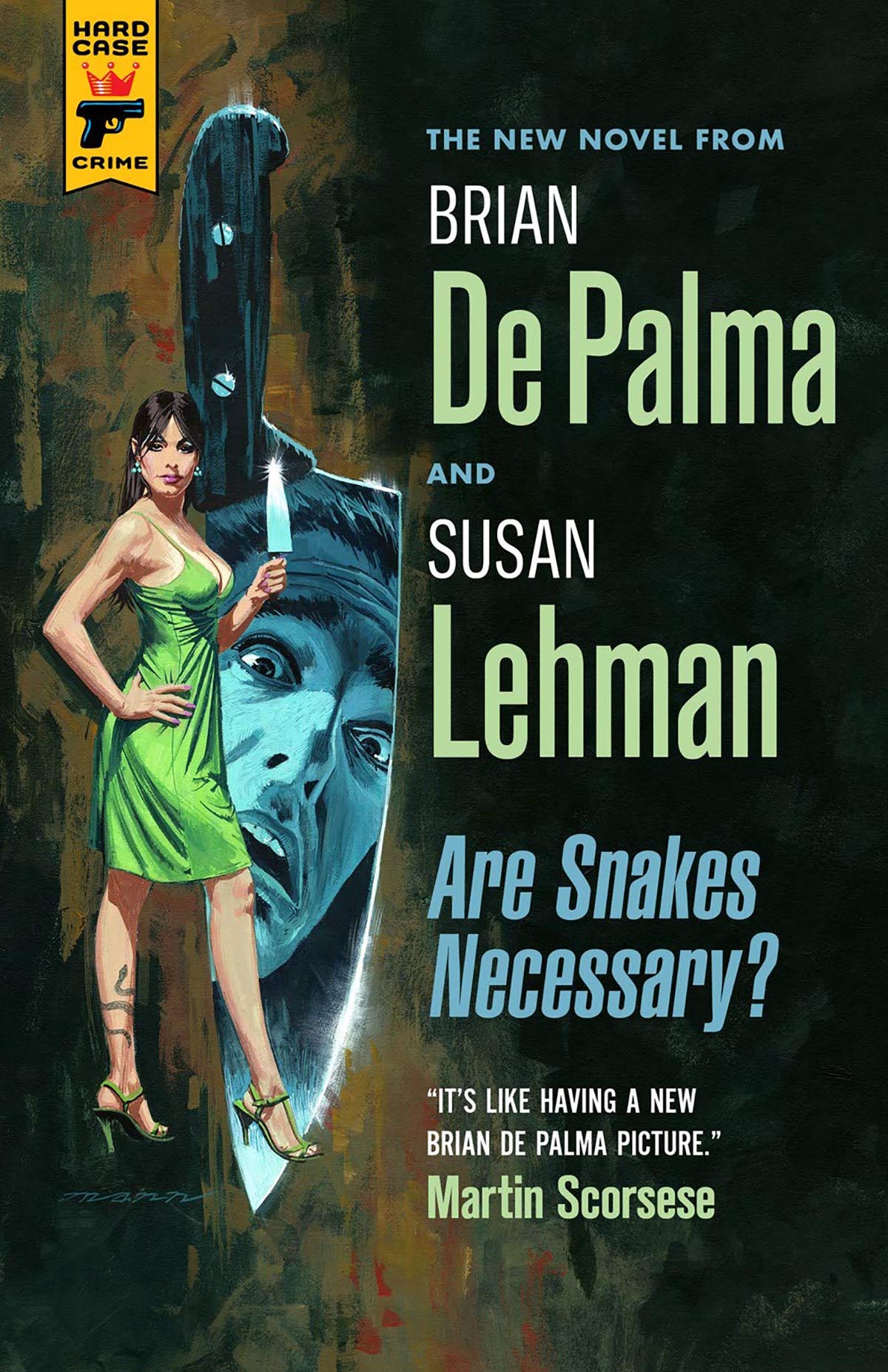 Once you could count on the release of a new Brian De Palma film every few years, many of which abounded in recurring motifs that suggested a secret conversation between the director and his admirers. There were Hitchcock references, particularly to Vertigo and its symphony of shifting female identities and male voyeurs hopelessly enthralled with sexual illusions. There were also tracking shots of astonishing virtuosity, unapologetic fetishizing of beautiful women, lusciously lurid cinematography, purplish scores (usually by Pino Donaggio), and an overall sense of playful abandon and adventurousness that renders most contemporary thrillers anemic by comparison. At their best and not-so-best, De Palma’s vintage films often felt like the ultimate fusion of brains and balls—explosions of the potentialities of pulp moviemaking.

Written in 2016 and now available from Hard Case Crime, De Palma and Susan Lehman’s Are Snakes Necessary? seeks to fill the void left by the filmmaker’s lack of output over the last decade or so, an absence which has often been accompanied by frustratingly unfulfilled rumors of various projects, as well as the half-hearted Domino. Composed of short, punchy prose and bite-sized chapters, this slim genre novel reads very much like a script for a new De Palma project, one that’s rich in the debauched and rarefied play lands of the rich and famous, aspiring photographers (voyeurs), male predators, and beautiful and imperiled women, with a soupcon of political intrigue on top. Yes, even Vertigo is evoked, as a blonde becomes a brunette and a variation of the perverse twist of De Palma’s unofficial remake of Hitchcock’s film, Obsession, is indulged. This naughty pulp cocktail goes down deliciously easy.

Three male and three female protagonists (De Palma, a former engineering student, values such symmetry) are sent by their hungers and ambitions on an elaborate collision course against the backdrops of heavily mythologized, movie-ready cities such as D.C., Paris, and Vegas. Barton Brock is a manager-slash-fixer for Lee Rogers, a Republican senator up for re-election who hires as an intern 18-year-old Fanny Cours, the daughter of one of Lee’s former conquests. Also mixed up in this inevitable sexual melee is Elizabeth Diamond, the trophy wife of a rich art collector, and Nick Sculley, an aspiring photographer who, like John Travolta’s character in Blow Out, requires a bit of real-life tragedy to inform his art with meaning.

The fun of the book springs from its abject, unapologetic horniness, which is more distinctive in our timid times now than it was in De Palma’s heyday, and from attempting to figure out which formula it’s going to settle into. (Short answer: several at once.) Much of the novel is devoted to these characters hanging out and discussing status and strategy, so that De Palma and Lehman may note their designer apparel and particularly their varyingly terrific bodies. (Fanny is said to be in the “full flush of carnality” and there are sentiments offered about the bodies of French women, bedroom voices, and the fit of white T-shirts on young, cut men, among other things.) Though there’s a consistent amount of sex here, the book still feels like an act of extended foreplay, as we’re conditioned by De Palma thrillers to await the violence that goes with the carnality. The climax atop the Eiffel Tower and its resolution ingeniously pay off the various story strands, offering a tragedy and its inadvertent avengement.

Still, Are Snakes Necessary? also illustrates the limitations of attempting to recapture the visceral qualities of cinema via prose. De Palma and Lehman’s writing is confident, but it still only faintly conjures the wrenching, surreal power of a classic De Palma sequence, whether it’s the prom scene in Carrie or the anguished murder in front of a Fourth of July fireworks display in Blow Out. The Eiffel tower sequence in Are Snakes Necessary?, with its vicious, mathematical toggling between various parties as they hurtle toward violence, is clearly meant to suggest one of De Palma’s greatest hits (the authors even specify which part of action is meant to be seen in slow motion), but the poetry is missing. De Palma is a maestro of juxtaposition, composition, and performance calibration, not of words on a page.

Though there’s fun in figuring out which of De Palma’s staple of actors might have played each role in Are Snakes Necessary?—Brock is the Gregg Henry character, Fanny is Nancy Allen, and so forth—on the page these characters are just mice being moved through a narrative contraption. Without De Palma’s stylistic gamesmanship, without the poignant, daring melodrama of the director’s preferred style of acting, the personality and obsessiveness of De Palma’s worldview is compromised. Are Snakes Necessary? offers a fascinating glimpse, then, as to how a script for a director is fleshed out by the other stages of a film’s creation. The book is a serviceable, even compulsive page-turner, but it could be a hell of a movie.

Are Snakes Necessary? is now available from Hard Case Crime.

Interview: Don Winslow on Broken and the Jazz of His Crime Fiction