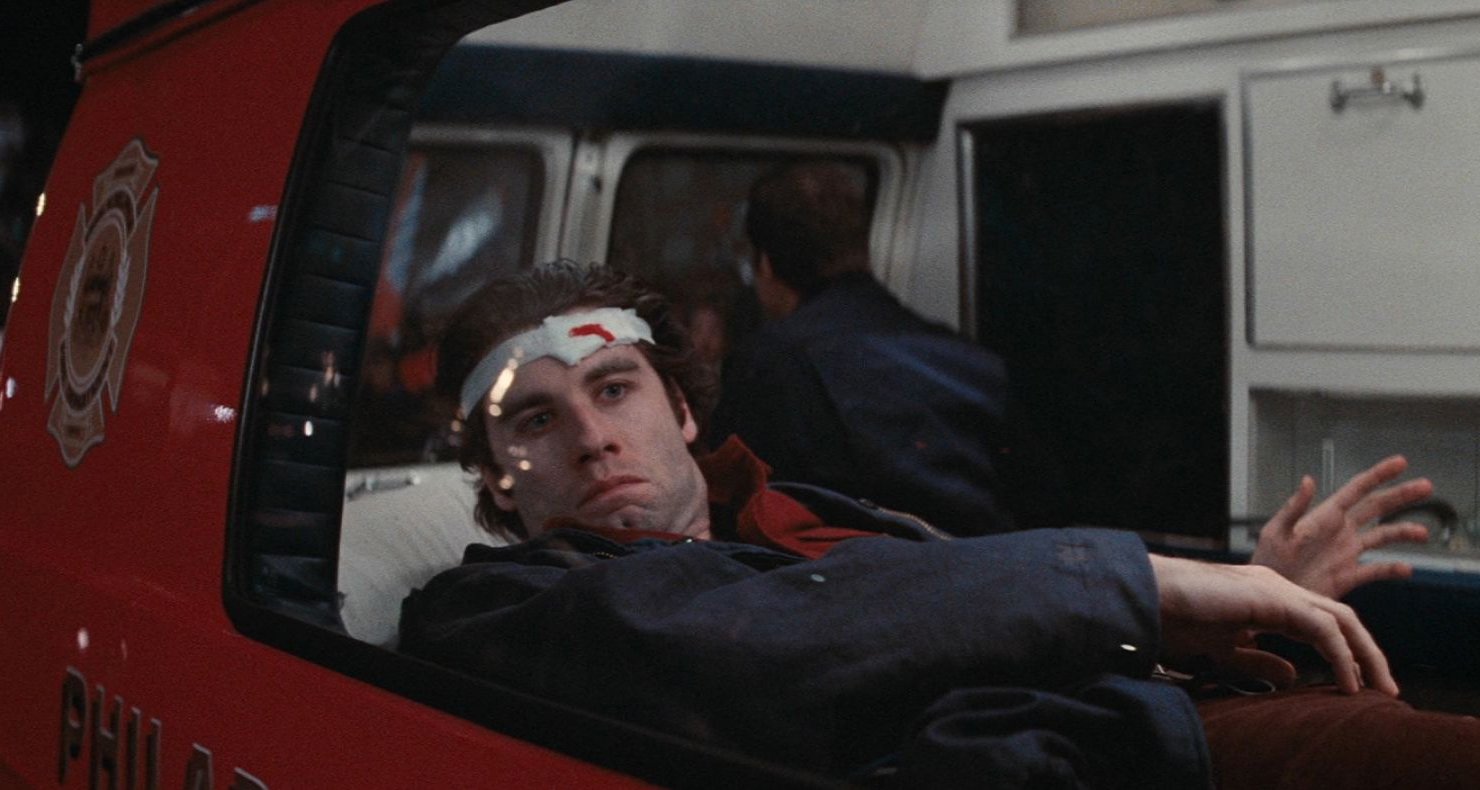 Though Blow Out isn’t known as one of Brian De Palma’s horror movies, of all his films, it’s the one that feels most like a nightmare. Carrie and The Fury ended with orgasms—frustrated teenagers revenging their oppressors in phantasmagoric releases of pent-up sexual energy. This espionage thriller goes out quietly, with a slow-motion dwindle into personal and political hell. By the end, the viewer half expects to wake up sweating, as if from some terrible dream. De Palma underlines this disillusionment by setting the story up for a heroic conclusion in the traditional Hollywood mold. Instead, the famous “scream” climax and the haunting epilogue that follows serve as a reminder that with political progress always comes loss. Set against the hopeful red-white-and-blue fireworks of Philadelphia’s Liberty Day parade, this tragedy recalls Thomas Jefferson’s wisdom: “The tree of liberty must be refreshed from time to time with the blood of patriots and tyrants.” Good guys and bad guys both spill blood in Blow Out; one wrong is righted, many more persist. De Palma’s cinematic sentiment, in the spirit of Jefferson, isn’t cynical so much as it is refreshingly frank.

America had fallen into a deep funk by 1981—the year of Blow Out’s release and Ronald Reagan’s presidential inauguration. Still hung over from the Vietnam War and dealing with inflation on the brink of recession, the public’s election of Reagan, on a platform of optimism, suggested a desire to move on and leave the past behind. De Palma, as anti-establishment as ever, suggests this in itself is another lie. When Jack Terry (John Travolta) inadvertently records the assassination of a presidential candidate, everyone politely asks him to leave his conspiracy to himself. But he can’t let it go. “It was just a blowout!” one official says of the car accident. Cops don’t want to bother investigating, and the deceased candidate’s campaign wants to see his legacy sink in peace. Everyone else would like to believe it was just “a freak accident,” so the nation can quickly heal again. (Maybe De Palma was prescient: Five years later Reagan would secretly and illegally sell arms to Iran in order to free U.S. troops, only to then deny he ever knew about the deal, retaining his bright image.)

Terry remains steadfastly principled, another one of De Palma’s naïve protectors of all things innocent and good in this world (re-crafted for Michael J. Fox in Casualties of War). An interrogator asks him, “Why do you care?” and Terry shoots back, “Well, it’s the truth, isn’t it?” Terry is a soundman for movies; he is in the business of recreating truth. Early in Blow Out, a split screen juxtaposes Terry marking effects with the deceptive production work of a network news show. Whereas Terry searches for unadulterated reality in his recordings (a gunshot, a door slam), TV journalism is invariably surrounded by white noise and political spin. Eventually, Terry will similarly sift through images and sounds from the accident to uncover a bullet that shot out the tire (“the bang before the blowout”). This virtuoso study in perception comes from Michelangelo Antonioni’s Blowup—though, unlike Antonioni, De Palma doesn’t question reality itself but, instead, its fragmented political representation. Blowup’s photographer prints his picture larger and larger, becoming lost in its iffy signs of murder. In Blow Out, the truth is cut-and-dry but spins out of control—hence a Blowup becomes a Blow Out.

Despite his determination, Terry always seems to keep complete dejection at bay (helped, no doubt, by the fact that Travolta suffered from insomnia during filming). In a flashback, we learn that he helped crack down on corrupt cops until one of his wires got an undercover detective killed: “I’m not gonna get fucked again.” Nancy Allen as Sally, a prostitute Terry rescues from the car accident, is like a new reason to live. She’s the ditzy blonde completely ignorant to the situation at hand, unable to differentiate good guys from bad guys. Everyone uses her, from conspirators to her photographer-cum-pimp Manny (Dennis Franz). Only Terry takes Sally seriously, for a very specific reason that comes to reveal itself as time goes on. Some critics have complained that the character is dumb, which is true, in a sense—if Sally was smart this would be a very different movie—but entirely beside the point. Sally is a victim of the political machine, someone Terry feels compelled to protect. De Palma projects onto her the innocence and purity Terry wishes to impart on his country.

Through the right mixture of batting eyelashes and world-weary sighs, Allen makes this damsel believable, even poignant. Most critics applaud Travolta, though in reality Allen deserved the Oscar. She turns herself into the Lady Liberty for modern times—a Barbie Doll hooker with a childlike giggle and a soul pure enough to make her of another world. Terry’s fight to save the truth is as much a fight for Sally (both are very real, and yet both are somewhat vague symbols of Terry’s love for his country), which makes the turnout all the more heartbreaking. When Terry finds himself inadequate to keep Sally or the truth out of harm’s way, it sends both him and the audience spinning into a moral nosedive…literally. Two times the camera revolves around him, as he feels his grasp on the mission slipping away. De Palma treats Terry sympathetically but sees through to his blind idealism that can’t possibly jibe with the way things really work. Terry becomes another casualty of war, one of the hermits who stay stuck in the past because the present is built on a lie. He still believes in principles, but they’ve been irrevocably tarnished. Maybe that’s what everybody else already knew.