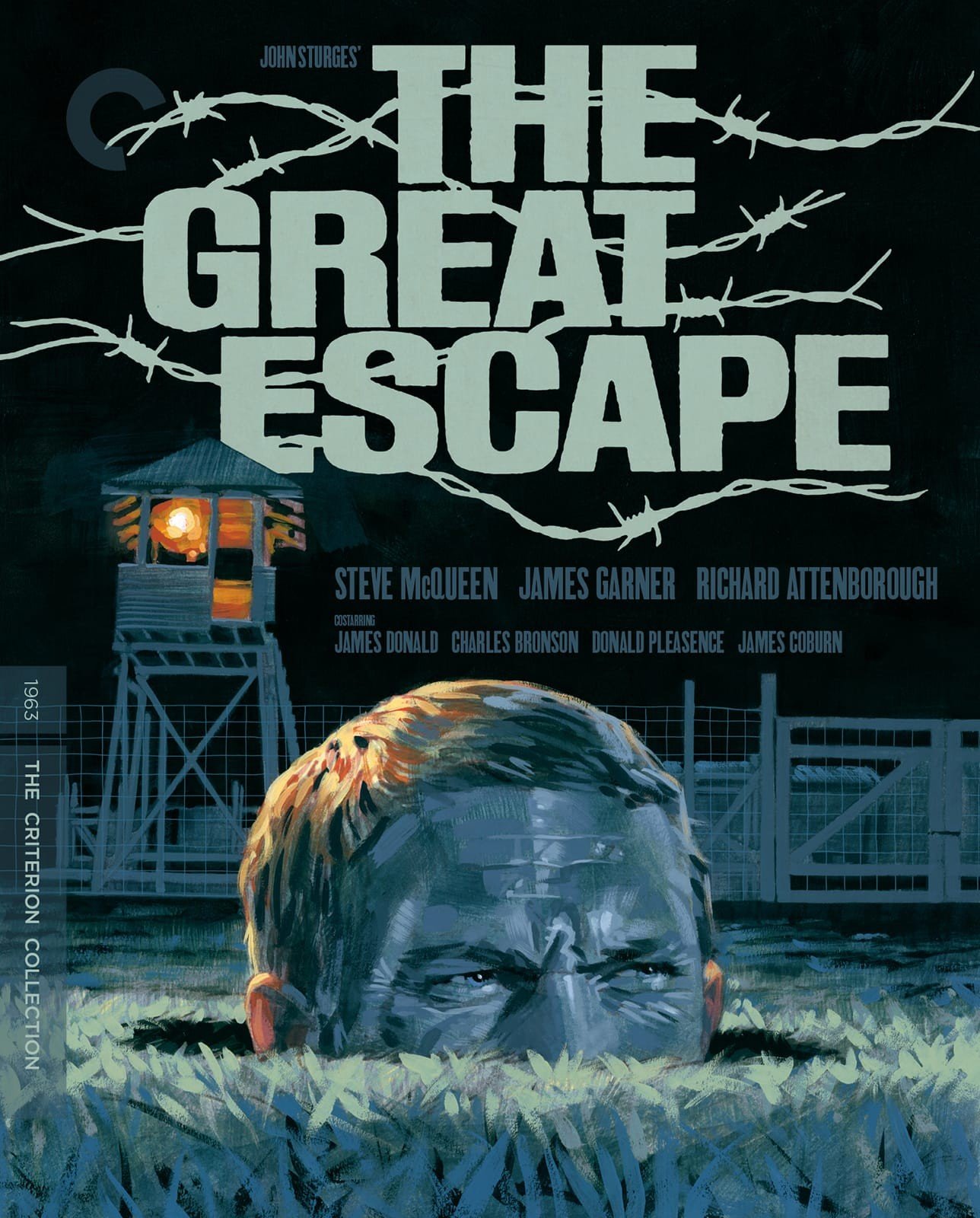 Though adapted by James Clavell, W.R. Burnett, and an uncredited Walter Newman from Paul Brickhill’s nonfiction account of the 1944 Stalag Luft III escape, John Sturges’s The Great Escape is equally inspired by a great fiction. The filmmaker’s treatment of the massive POW escape from a camp in Nazi-occupied Poland alludes to a similar and iconic sequence from Grand Illusion Illusion, Jean Renoir’s no less furious and eloquent articulation of the faux civility of warfare. But if Sturges’s earlier The Magnificent Seven bound itself just a bit too tightly to the structure of Akira Kurosawa’s Seven Samurai, The Great Escape builds its own distinct style and thematic preoccupations, even as its influences remain clear.

The absence of brutal ground warfare in The Great Escape reflects Struges’s personal experience during World War II: The director served as a captain in the Army Air Corps and spent a large portion of his time shooting documentaries and instructional films for the military. In The Great Escape, the filmmaker largely evades the action and horror of war, instead focusing on an immense creative process: the building of the tunnels that will help a group of prisoners, led by Royal Air Force squadron leader Roger “Big X” Bartlett (Richard Attenborough), get out from under the Luftwaffe. Each member of the dedicated team of soldiers, who come from various Allied Forces, provides a skill that helps the effort to build the tunnels, conceal the activity, and ultimately execute the thrilling escape.

This tactic allows for members of the uniformly excellent cast to highlight their personalities through their respective characters’ varied areas of expertise, from James Garner’s fast-talking and resourceful Scrounger to Steve McQueen’s incorrigible Cooler King to Donald Pleasance’s mild-mannered Forger. McQueen is front and center, but Sturges democratically shows the breadth of work being done and the essentialness of each man’s mission. This dense interweaving of talents working on what amounts to a great, heroic production implies Sturges’s view of filmmaking as inherently collaborative. Tellingly, Pleasance’s forgery expert has a need for a specific camera with a special lens, while another captive creates an expansive wardrobe to keep the soldiers inconspicuous outside of the camp.

The collateral damage of Sturges’s dedicated focus on the minutiae of the titular escape is that the grimness of the prisoners’ station is only mildly realized. A prisoner’s early escape attempt ends in a spray of bullets across his back, and when the prison break finally occurs, few of the escapees taste freedom for very long, but Sturges’s depiction of this civil incarceration operates far apart from the desperate, violent reality of the times. Even the prisoners’ infighting, and their interactions with their Nazi keepers, is relatively soft, little more than a few fists pounding on tables and some mockingly sarcastic retorts.

The film doesn’t offer easy catharsis, nor does it portray the Luftwaffe as essentially evil; the most prominent guard is, in fact, a complete dullard taken in by Garner’s smooth operator. Indeed, the filmmakers buck the vision of a solitary war hero who excites his fellow prisoners into revolt, and instead foreground the sense of duty in rebellion that drives the captured soldiers. And as the prisoners symbolize a broad swath of the international effort against the Axis powers, The Great Escape is that rare war film that doesn’t fully indulge in assumed nationalism, save for the fact that everyone speaks English. Sturges never touches on the essential hollowness and cruel pageantry of war, but he does the next best thing by depicting an international effort where victory, no matter how short-lived, depends on the cooperation of myriad talents, rather than the gruff can-do attitude of an unbreakable chosen one.

The Criterion Collection’s new, restored 4K digital transfer boasts a generally sharp picture and impressive depth of field throughout. There are a handful of scenes where the image noticeably softens, but these instances are infrequent enough to never become too distracting. For the most part, there’s an impressive amount of visible detail throughout the frame. The color balancing is somewhat muted in places, but the blacks are perfectly inky, forest greens are vibrant, and skin tones are consistent regardless of the scene’s lighting conditions. The uncompressed monaural soundtrack gets the job done, standing out particularly when Elmer Bernstein’s memorably rousing score rises to the forefront.

This release boasts a superb array of extras, most notably two feature-length commentary tracks. The first, which was recorded in 1991 and includes separately recorded snippets from director John Sturges, composer Elmer Bernstein, and a half-dozen or so other crew members, is hosted by film historian Bruce Eder. He does a fine job re-introducing each new speaker as they return to the commentary and chimes in with his own expert analysis, offering insight on the details of how the events upon which the film is based played out in real life. Between the half dozen participants, nearly every aspect of the film is touched upon, including the performances, Sturges’s working methods, such as his allowing for improvisation on set, various production details, and Bernstein’s attempts to create a score that gives a sense of levity and soulfulness to help counterbalance the film’s darker subject matter.

The second commentary track, seamlessly weaved together from separate recordings from 2003, features actors James Garner, and Donald Pleasance, James Coburn, as well as others involved in the making of the film. Author Steven Jay Rubin serves as the host this time around, turning his attention more specifically toward the film’s performances and the various careers that blossomed following The Great Escape’s release. All three actors heap praise upon Sturges, not only for his direction, but also his brilliance at casting and editing. The trio provides plenty of entertaining on-set stories and discuss the impressiveness of seeing the finished POW camp, which was built from scratch in a forest outside of Berlin.

The four-part, 45-minute documentary “The Great Escape: Heroes Under Ground” delves even deeper into the historical events that inspired the novel and film, and covers the challenges of taking creative license to make an entertaining picture while still aiming for realism. The 25-minute featurette “The Real Virgil Hilts: A Man Called Jones” focuses on David Jones, the United States Army Air Forces pilot who served as the model for Steve McQueen’s character, while the brief documentary “Return to The Great Escape” touches on Paul Brickhill’s novel, the film’s art direction, and the extreme lengths the film went to achieve verisimilitude.

In the only newly recorded extra, critic Michael Scagrow contextualizes Sturges as a distinctly transitional director who, along with John Frankenheimer and Sidney Lumet, served as the bridge between the old Hollywood masters and the New Hollywood filmmakers of the 1970s. The package is rounded about with a booklet essay by Sheila O’Malley in which she discusses the film’s success in telling a story about “a serious subject…without self-seriousness.”

With a superb and diverse slate of extra features, Criterion’s Blu-ray release of The Great Escape offers an abundance of goodies to dig into from the inside.

Queer Debauchery As Waking Dreamscape: Equation to an Unknown