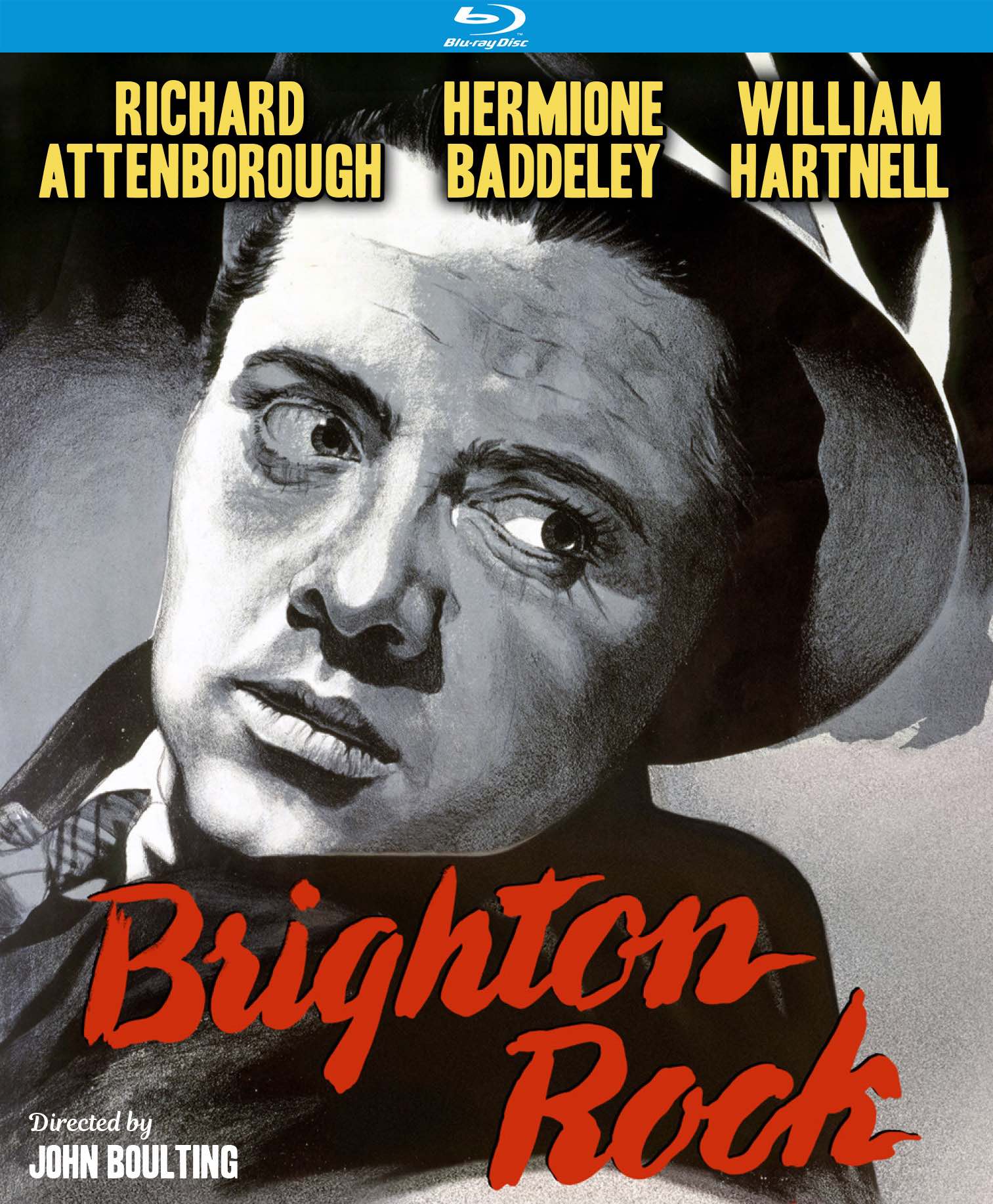 John Boulting’s Brighton Rock, adapted by Graham Greene and playwright Terence Rattigan from Greene’s 1938 novel of the same name, works not only as a thriller of almost Hitchcockian precision about gangland rivalries, but as a searing moral inquiry into sin, guilt, and the all-too-human capacity for evil. The film’s formal construction adds considerably to its overall effectiveness: The confluence of Harry Waxman’s moody monochrome cinematography and Peter Graham Scott’s razor-stropped editing ensures the film comes across as exhilaratingly as the amusement park rides that figure in the titular seaside resort. Brighton Rock also boasts lots of quasi-documentary location filming, bringing to mind a contemporary film like Jules Dassin’s more resolutely urban The Naked City.

The opening set piece features a chase through Brighton’s byways, as the tight-knit gang led by Pinkie Brown (Richard Attenborough) attempts to corner reporter Fred Hale (Alan Wheatley), whose exposé on rigged slot machines got their former leader killed. The pursuit ends on a dark ride on the pier, where Pinkie proceeds to push Hale to his death. The sequence isn’t just a masterpiece of machine-tooled assemblage, from the “stolen” street shots to the impressionistic depiction of Hale’s demise, but it also succinctly establishes most of the main characters and their interrelations. The one major character introduced later is poignantly impressionable Rose (Carol Marsh), a waitress at the upscale restaurant that down-market Pinkie patronizes in order to retrieve some potentially incriminating evidence.

Pinkie and Rose are immediately linked by the similarity of their colorful names, as well as by the discovery of their shared Catholicism. Their bond, however, is more than a little one-sided. Rose falls hard for Pinkie’s innocent mien, while Pinkie can only feel contempt and eventually disgust at her attentions. The film subtly suggests that Pinkie’s aversion to physical demonstrations of affection like kissing, not to mention the act of lovemaking itself, stems from an exaggerated attention to the tenets of his religion, prompted, perhaps, by early exposure to what Freud liked to call “the primal scene.”

The decidedly ambivalent relationship between Pinkie and Rose allows Greene, who later in life called himself a “Catholic agnostic,” to layer in concepts that were of concern to him throughout his work. Imagery of hell and damnation runs rife throughout the film. The dark ride where Pinkie kills Fred Hale is called “Dante’s Inferno.” When Pinkie and Rose discuss their beliefs, Pinkie assures her that hell is real, while heaven remains at best a “maybe.” And later in Brighton Rock, Pinkie’s crooked mouthpiece, Prewitt (Harcourt Williams), invokes a line from Marlowe’s Doctor Faustus: “Why, this is hell, nor am I out of it.”

Interestingly, Prewitt’s line comes as a direct reference to the institution of marriage, about which the film seems equally ambivalent. Early on, we see a blind man holding his wife’s hand while she carouses with one of Pinkie’s men. Pinkie marries Rose only so that he can avail himself of the legal protection that says spouses cannot testify against each other. Even then, he insists that the wedding be a strictly civil ceremony, not sanctified by a priest.

As the net inexorably closes around him, Pinkie callously suggests that he and Rose take their own lives in a suicide “pax,” as he puts it, an agreement he intends to be entirely one-sided on Rose’s part. Suicide, of course, is considered one of the gravest mortal sins by the church, but Rose proves all too willing. As she insists in the film’s ironically ambiguous coda, she would rather be damned with Pinkie than be alone in heaven, so strong is their love. And as proof, she produces a record of Pinkie’s voice that he made earlier at a fairgrounds booth, on which he tells her precisely what he thinks about her. But now its surface, scratched by Pinkie in a vain attempt to destroy it as evidence at one point, yields only the phrase “I love you” over and over again. Rose is thus safe in her delusion, and only the viewer is any the wiser.

Kino’s Blu-ray presentation of Brighton Rock isn’t billed as any sort of a restoration, and that’s evident from the speckling and other minor blemishes on display throughout. Overall, the image reveals some fine detail, decently balanced contrast, and reasonable depth. Grain levels are a bit all over the place, especially in low-light and night scenes. Still, it’s definitely a step up from previous SD editions of the film. There’s a Master Audio stereo track that cleanly and clearly presents the dialogue (with subtitles available for anyone having trouble understanding the criminal argot), and admirably conveys Hans May’s portentous score.

The big bonus feature here is another excellent, endlessly informative commentary track by author and film critic Tim Lucas. As usual, he has a lot to say about the careers of Brighton Rock’s cast and crew, and various filming locations in and around Brighton. But where the track really takes off is in his detailed comparison of the screenplay with Graham Greene’s source novel, indicating excised events and even stray lines of dialogue that were left out of the film, as well as comparing the 1948 film and Rowan Joffe’s 2010 remake.

John Boulting’s adaptation of Graham Greene’s novel succeeds admirably both as a crackerjack crime thriller and as a moral exposé of human evil.