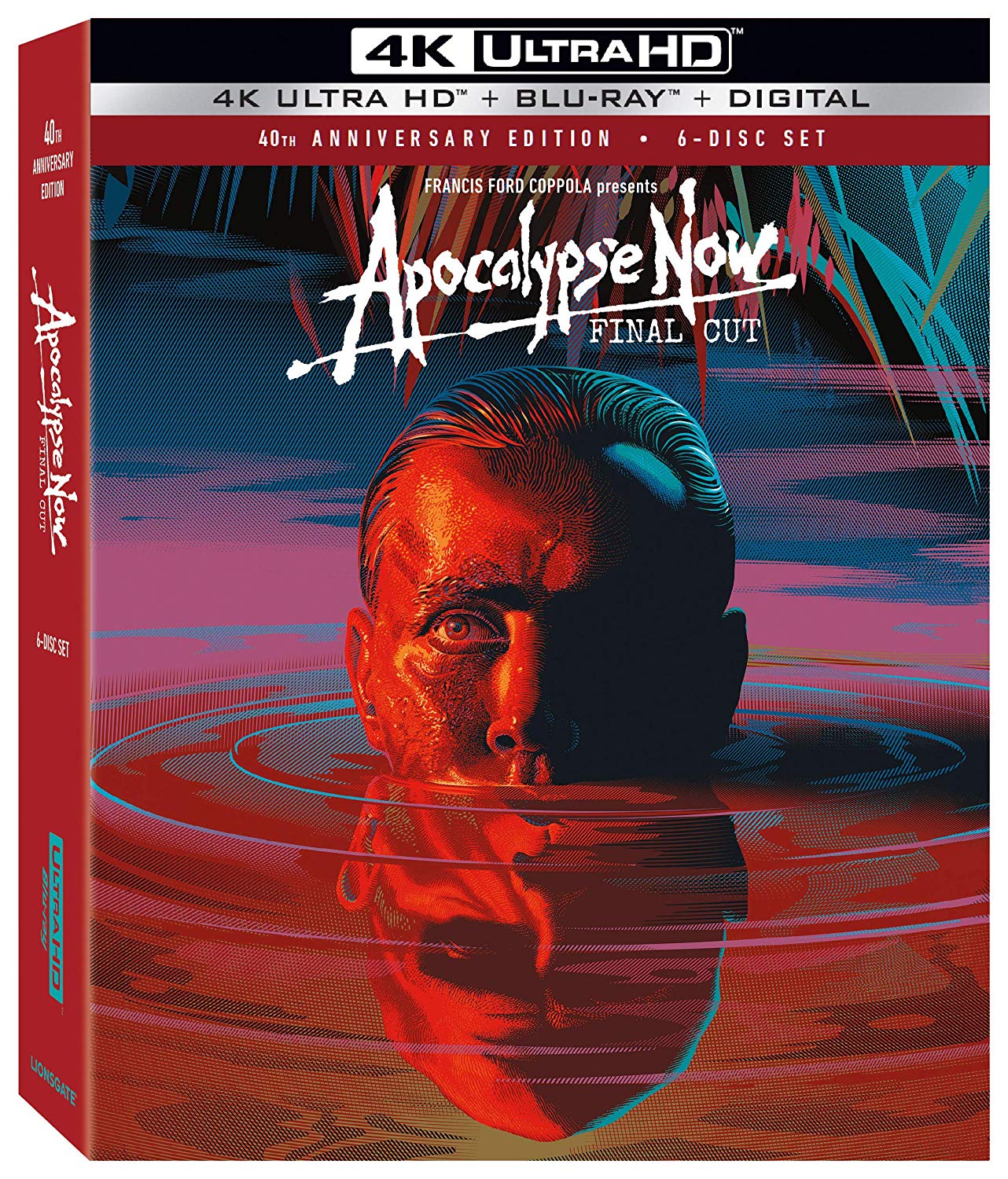 As much a magnum opus as it is a film maudit, Francis Ford Coppola’s Apocalypse Now may be the most debated film of the New Hollywood era. Lauded and condemned for its psychedelic vision of the Vietnam War, the film needs little in the way of introduction. Its transposition of Joseph Conrad’s 1902 novella Heart of Darkness is equal parts lucid and incoherent, boasting some of the most famous, epically scaled sequences in all of cinema that nonetheless remain fundamentally claustrophobic articulations of fear, paranoia, and loathing. Such scenes as the helicopter raid set to Wagner’s “Ride of the Valkyries” and dialogue like “I love the smell of napalm in the morning” have thoroughly seeped into the cultural lexicon. No matter how many times one views Coppola’s film, Captain Willard’s (Martin Sheen) boat ride into hell never loses its sense of unease.

Coming off three of the most tightly ordered, structurally precise films of the New Hollywood era, Coppola’s embrace of the ambiguities of impressionism, both in Apocalypse Now’s storytelling and its aestheticism, naturally felt like an unexpected left turn for the filmmaker. Vittorio Storaro’s yellow-tinted cinematography invokes napalm and Agent Orange, while the sense of time’s passage increasingly evaporates with each dissolve transition. The deeper that Willard and his boat crew sink into the jungle, the more the film’s colors blur and bleed, reflecting the soldiers’ increasing disconnection from reality. Pitch-black night scenes are suddenly illuminated by throbbing white balls of phosphorous that burn hazily in the air like miniature stars. Even the actors sound as if they’re subsumed in a kind of fever dream, none more so than Marlon Brando, who laconically delivers Colonel Kurtz’s deranged ramblings, every word gathering like moisture in his mouth before indifferently trickling out of it.

In the decades since its release, Apocalypse Now has been the subject of fierce and understandable debate over its depiction of Vietnam, from the film’s Americentric perspective to its reductive view of the Vietnamese as an unknowable “other.” It presents the country entirely removed from context, a mysterious realm that most of the men sent to fight there couldn’t find on a map. The 2001 “Redux” cut of the film, which added nearly an hour to the theatrical cut’s running time, attempted to redress this by including material that Coppola shot that dealt more explicitly with Vietnam’s history, particularly in scenes set in an isolated rubber plantation, where a French colonial family appear trapped like ghosts.

That edition is included here, as is Coppola’s newly crafted “Final Cut,” which splits the difference between the two versions, retaining the scenes set at the plantation while omitting some of the scenes that were rightly left out of the theatrical cut, such as the second encounter between Willard’s crew and the Playboy bunnies visiting on a U.S.O. tour. The film, notoriously ambiguous and irresolute in any form, gives the impression of being endlessly malleable and open to Coppola’s notorious impulse for revising his filmography. Indeed, given the free-form possibilities of Apocalypse Now’s dream logic, the new cut’s judicious pruning of the “Redux” assembly is surprisingly conservative for a filmmaker who originally planned his 2011 film Twixt for a format that allowed real-time editing during projection.

Apocalypse Now’s “Final Cut” streamlines the flabby excesses of the “Redux” version, but in truth, the theatrical cut remains the definitive, if most problematic, edit of the film. Absent the modest attempts at historical context of the other two cuts, the theatrical version plunges us into the heads of its characters with dizzying abandon. Its portrait of Vietnam may be dishonest, but in its nightmarish hallucination is something close to the truth of the madness of reflexive imperialism. Apocalypse Now is a film about the consequences of instinctively invading a place one knows nothing about, and in that sense the film’s flaws of perspective can just as easily be seen as the embodiment of its thematic preoccupation. That a film so caustic and surreal in its view of the Vietnam War has largely become the dominant cultural image of the conflict in America is strange, but it speaks to Coppola’s intuitive vision of the war as collective insanity that Apocalypse Now’s phantasmagoria so often rings true.

Lionsgate’s previous Blu-ray of Apocalypse Now was of exceptional quality, but its transfer was sourced from an interpositive. For the first time, Francis Ford Coppola has been able to restore his film directly from the negative, and the results are stunning. Flesh tones are natural and detail is so fine that in some shots you can practically count the threads on soldiers’ roughly sewn fatigues. Apocalypse Now’s colors have always had an inherently smudgy quality, and that aspect is retained here even as the transfer shows a crisper image than ever before. Color separation is more precise, allowing for greater contrast in picture quality. Also, the black levels across the nighttime sequences are much deeper than they were on previous releases of the film, while grain is more evenly distributed throughout.

Apocalypse Now was a watershed in theatrical sound mixing, and prior home-video releases of the film boasted soundtracks so pristine that you can use them to calibrate your speaker setups. With this release, though, Coppola has reached new heights, restoring the original audio tracks into a new Dolby Atmos mix that’s wholly engrossing. Directional sound effects move almost three-dimensionally, so delicately are they mixed between and within channels, and Carmine Coppola’s electronically tinged, hypnotically dissonant score thrums with new life. All three versions of the film have been restored from the negative and given Dolby Atmos mixes, making for perfect quality no matter which track you opt for.

Just as Lionsgate’s last Blu-ray edition of Apocalypse Now boasted reference-quality audio and video, so, too, were its extras exhaustive. This six-disc release includes everything from the previous release, including Hearts of Darkness: A Filmmaker’s Apocalypse, which as become as legendary at this point as the film its documents. There are too many extras to enumerate, with featurettes on every single aspect of the film’s production, from its casting to its sound mixing. There are deleted scenes, including an entire alternate ending where Kurtz’s compound is napalmed, as well as audio from a 1938 Mercury Theatre radio production of Joseph Conrad’s novella. Astonishingly, there are even more extras this time around, with the final disc containing the documentary and a wealth of new, retrospective features that detail Apocalypse Now’s latest audio and visual restoration. There’s also additional behind-the-scenes footage, as well as a Q&A between Coppola and Steven Soderbergh.

Review: Alexander Mackendrick’s The Man in the White Suit on Kino Blu-ray