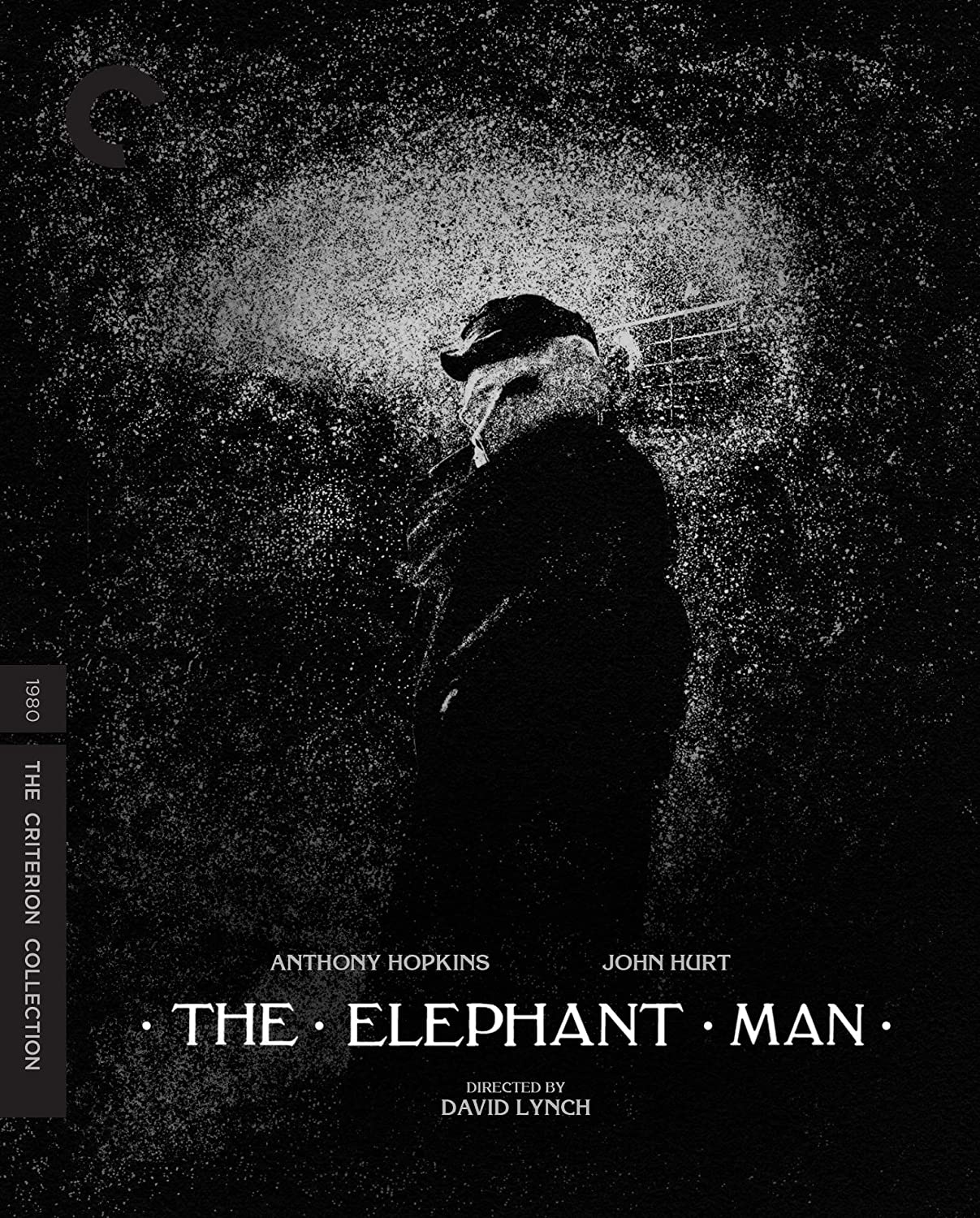 David Lynch’s The Elephant Man belongs to one of the mustiest of genres: the inspirational biopic. The film details the late life of Joseph Merrick (called John here), an English man born in 1862 with severe deformities, including a twisted spine and face, huge and painful knots of flesh and bone, and a phallic head so large and heavy that he couldn’t sleep laying down for fear of breaking his neck. Merrick was discovered performing in a freak show by surgeon Frederick Treves, who eventually set him up in a suite at the London Hospital, where Merrick became an unlikely socialite and celebrity, earning praise and adoration beyond anyone’s wildest dreams. Such a story, of an outcast reconciling with society, sounds opposed to the radical interests that Lynch displayed in Eraserhead and would go on to refine in future projects.

The Elephant Man isn’t without sops to formula, as Lynch and co-screenwriters Christopher De Vore and Eric Bergren simplified Merrick’s story to more efficiently exploit our tears. Most notably, they elided the details of the man’s role in his own exploitation at freak shows—he apparently wanted to get out of workhouses and recognized an opportunity—so that we may infer that he’s at the mercy of others. The film’s freak show ringleader, Mr. Bytes (Freddie Jones), is a drunken tyrant out of a fairy tale, while Merrick (John Hurt) is a holy innocent who coaxes the best out of mostly the upper class. (This pattern is an early sign of Lynch’s strange classist streak; the people unable to transcend their biases about Merrick are, with rare exception, blue collar.) Between these men on the film’s moral spectrum is Treves (Anthony Hopkins), whose own exploitation of Merrick, in terms of displaying the man to medical professionals, is mentioned but largely unexamined. Such recognizable tropes have helped foster the reputation that The Elephant Man is one of surrealist Lynch’s few “straight” films.

Yet Lynch brings to this story an ecstatic, hallucinatory tactility that belies the understanding of audiences (including some critics) who seem to experience films only in terms of their narrative beats. With considerable aide by cinematographer Freddie Francis, production designer Stuart Craig, art director Robert Cartwright, among others, Lynch conjures a menacingly beautiful, overpopulated Victorian London that’s rife in smoke and shadows, and the primordial industrial sounds that haunted the drab warehouse world of Eraserhead. In fact, this black-and-white London suggests something like the progenitor of that realm, as Lynch shows the rising industrial age to be a fount of quick and easy miracles—gas lanterns and machines that enable mass factory work and around-the-clock amusements—that lend themselves to pollution, workplace drudgery, violence, and casual alienation. Formally, this film is a more mature examination of exploitation than a mere plot summary can convey.

Most pivotally, Lynch is committed to rendering the sensorial experience of living as a physically damaged, greatly abused man who encounters nothing but revulsion until Treves offered him the miracle of empathy. Lynch, who himself has an exploitive streak, exhibits remarkable tact and delicacy in The Elephant Man. For the film’s first act, we see Merrick in a heavy coat and a hood with a singular slit for an eyehole that suggests, per Pauline Kael, a movie theater screen. Due to the attentive sound mixing, we feel Merrick’s considerable pain, especially his labored breathing, even as he is invisible to us. Merrick is so present, even disguised, that we’re never led to anticipate his “reveal” cheaply, as we might a monster in a horror film. And when Merrick is finally shown in full, through the point of view of a horrified nurse who walks into his London hospital chambers, we feel his shock, not hers, as he’s seen to be disturbed while enjoying a rare interlude of repose and comfort. In another moment, in which we see Merrick’s silhouette while Treves shows him to colleagues, we’re allowed to feel even through the medical sheet the will it takes for this man simply to stand.

Lynch shows similar restraint in staging the narrative’s emotional crescendos, of which there are many. He understands that Merrick’s story is inherently heartbreaking, and frequently ends scenes the second they reach a catharsis, without wallowing in aggrandizing joy or misery. This strategy allows us to savor the fleetingness, the value, of each of Merrick’s lovely encounters—especially the extraordinarily moving passages with Treves’s wife, Ann (Hannah Gordon), and the theater actress Madge Kendall (Anne Bancroft)—at the same time as Merrick is allowed to be taken at face value as human. Lynch imbues the film with a wrenching matter-of-fact quality that honors Merrick and his efforts to be an upper-crust English gentleman, who wears nice suits and takes tea with friends. Clumsy melodrama would condescend to Merrick, paying him the insult of pity while compromising the profound lightness of being, and an awareness of seemingly unimaginable pain, that Hurt brings to the role. In other words, Lynch adopts the lucid point of view of Treves, tenderly regarding a cursed man who nevertheless savored beauty. For Lynch, Merrick is the ultimate tortured artist.

This 4K restoration was undertaken with close supervision by David Lynch, and it suits his exacting standards. The black-and-white cinematography boasts phenomenal clarity as well as a healthy grain structure—a combination that evokes a modern-era daguerreotype. The transfer is a bona fide feast of visual details, from the slums of old East London to the fine clothes and accessories of the wealthy. Landscapes, especially the woods of a surreal escape scene, shimmer with a healthy, heavenly translucent light, and the blacks are weighty and well-differentiated. (And a modern transfer does nothing to dispel the power of the film’s make-up effects.) The 2.0 English LPCM track, which was redone for this edition to recapture lost nuances, is flawless to these ears, especially tending to Lynch’s longtime obsession with the heavy, enslaving, weirdly reassuring sounds of industrial machines chugging away.

The extras are composed mostly of archive material ranging from the 1980s to the early 2000s, including various interviews over the years with actor John Hurt, producer Jonathan Sanger, make-up artist Christopher Tucker, producer Mel Brooks, cinematographer Freddie Francis, and stills photographer Frank Connor. Taken together, these extras tend to repeat themselves, though the central story of The Elephant Man’s realization from a spec script to Lynch’s second film is rendered here with great detail. The best one-stop shop is “The Terrible Elephant Man Revealed,” a 21-minute program that collects most of the aforementioned players all together, with particularly evocative observations from Brooks and Tucker, who’d fashion make-up so striking that it would inspire the Oscars to create a new category.

There are also several archive interviews with Lynch: one from 1981 at the AFI, in which it’s evident that he’d already honed his elliptical, allusive way of answering questions; one from 2006 with filmmaker Mike Figgis, where he speaks quite poetically of the nature of inspiration; and one from 2009, where he offers a surprisingly straightforward account of his involvement with The Elephant Man. Details of the film’s production are affirmed once again on this disc’s most recent feature, in which Lynch and Kristine McKenna read passages from their 2018 book, Room to Dream. This segment also contains tantalizing descriptions of one of Lynch’s most famous unrealized screenplays, Ronnie Rocket. Radio spots, a piece on Merrick’s real life, and a booklet—featuring passages from Chris Rodley’s book Lynch on Lynch and an 1886 letter to the London Times concerning Merrick—round out a sturdy package.

David Lynch’s The Elephant Man may be a comparatively “straight” entry in the surrealist’s filmography, but it’s nevertheless a rapturously beautiful and moving art object.