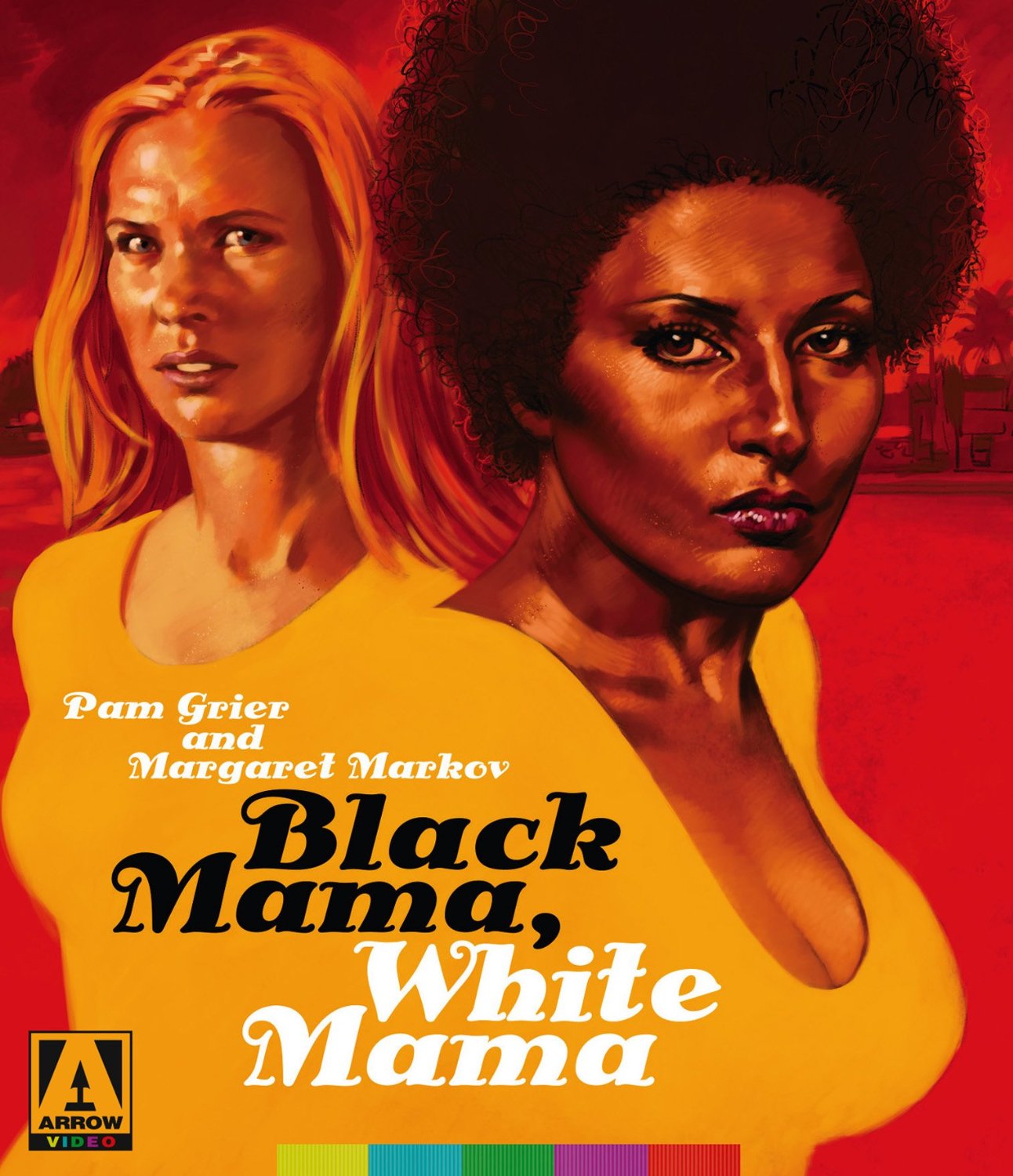 The racial tension inherent in Black Mama, White Mama’s title is immediately complicated by the film’s opening sequence, as a busload of female inmates are being transported to a new prison. Karen (Margaret Markov), a would-be revolutionary recently taken prisoner by the police, looks through a window and sees a Filipino female field worker staring back at her with an ambiguous facial expression. The women are immediately aligned through their eyeline matches, as each currently has comparable, though different, degrees of limited freedoms. Director Eddie Romero employs the same technique just moments later, as Karen locks eyes with Lee (Pam Grier), a fellow inmate and soon-to-be fugitive partner in their prison escape.

In both exchanges, it’s unclear exactly what the staredowns mean. Is each woman silently comparing her situation to the other’s? Romero leaves the ambiguity unresolved and it’s a choice that informs the better portions of Black Mama, White Mama, which vacillates between being a feminist manifesto and a more typical exploitation flick, with scenes of nudity and violence included solely for reasons of titillation. It’s the kind of tonally discordant film that revels in seeing a war lord, Vic Cheng (Vic Diaz), administer electroshock treatment to a female prisoner, but also affords its characters instances of quieter, thoughtful reflection on the inevitably grim consequence of armed political conflict.

For a low-budget potboiler modeled after Roger Corman’s work, the film has an unusually dense and complex narrative that crosscuts between various locations on an unnamed island (the production was shot in the Philippines) where illegal drug trafficking and gun running overwhelm local authorities. In prison, Karen speaks of needing guns for Ernesto (Zaldy Zschornack), her lover and leader of a guerilla group in conflict with Captain Cruz (Eddie Garcia), a desperate military type who quickly stoops to hiring Ruben (Sid Haig), a small-time brawler, to bust up both Vic Cheng’s drug operations and Ernesto’s revolutionary tactics. To complicate matters further, Lee stole $40,000 from Cheng, who was her pimp, and seeks a way off the island to avoid the consequences. Once Karen and Lee escape into the jungle, chained at the wrist, they agree to assist one another in spite of their initial spats.

Entangled though it is, the plot typically bends to suit the filmmakers’ predilections for having male characters constantly prize their ego over their workable abilities, especially in the case of those men with a taste for power. No moment better illustrates these inclinations than when Ruben commands Cruz and one of his officers to strip to see who has “the biggest pecker.” Ruben’s insistence on bodily humiliation comes not with an economic price, but simply as a means to immediately flex his authority, even if it’s purely a matter of momentary circumstance (he simply wants to ensure that Cruz trusts him). Nearly every man is capable of humiliating (or worse) another person for instant affirmation of his own sadistic self-interests. When Karen and Lee stumble upon a drunken local named Luis (Ricardo Herrero), they offer their bodies in return for being cut loose, but the man scoffs, as if insulted: “Luis don’t have to make deals. Luis takes what he wants!”

Most scenes in the film play out such conflicts of power, gender, and ethnicity by having characters resort to crude acts of sexual force and violations of privacy. In an early scene, the prison’s matron (Lynn Borden) spies on the showering women through a peep hole and masturbates as they chase one another with a limp, barely functional hose. If the Freudian implications weren’t apparent enough, one of the women says, “That’s the closest we’re going to get to a man for a long time.” Though the punchline is meant to elicit a laugh, it garners poignancy in retrospect since the film turns out to be teeming with men, all of whom treat women merely as products to be sold and indulged, just like drugs and weapons. And critically, the woman’s role as a product persists whether in the name of money, love, or revolution.

It might sound tempting to deem Black Mama, White Mama a feminist film, though scenes inserted simply for the purpose of ogling both Grier and Markov’s breasts trouble that notion. Nevertheless, given the film’s comprehensively negative depiction of boorish men with a will to power, a lingering, choking aroma of outraged misandry undergirds each scene set outside of the all-female prison, which ironically turns out to be the film’s only, even moderately, safe haven.

The high-definition transfer on Arrow Video’s new Blu-ray impresses throughout for its clarity and absence of visible flaws, though the restoration lacks the precision and depth of field that a more dynamic 2K refurbishing could yield. Few are likely to pout over the difference, however, especially since each scene and frame appear to have been carefully restored, meaning the image remains consistent throughout and without drastic changes in quality. The audio track is equally commendable, especially for its balanced mix of sound effects, score, and dialogue. Given that the previous release for Black Mama, White Mama was a barebones DVD from MGM’s Soul Cinema label back in 2001, Arrow’s rescue efforts are sure to remain the film’s preferred home-video presentation for the foreseeable future.

These supplements are an improvement over Arrow’s recent Sheba, Baby disc, if only because there’s a worthwhile feature commentary from filmmaker Andrew Leavold that engagingly explains both the film’s production contexts in the Philippines and offers more trivia-based tidbits about its enduring legacy. Equally informative are a pair of recent interviews with Margaret Markov and Sid Haig, each of whom explains how they came to be involved with the film. Haig, in particular, has a funny anecdote about seeing Pam Grier on the set of Jackie Brown many years later. Finally, there’s an archival interview with director Eddie Romero, the film’s theatrical trailer, and a stills gallery.