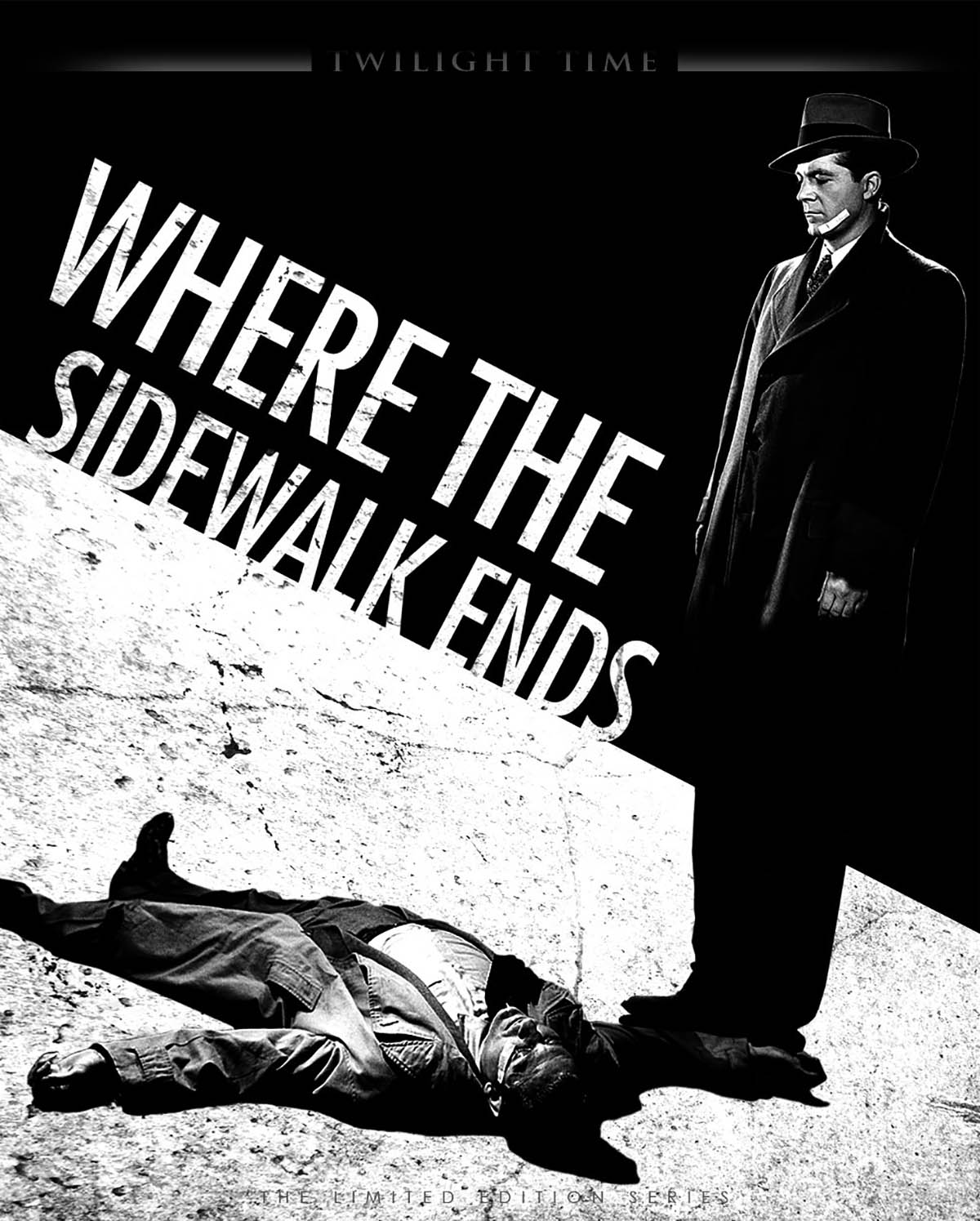 An oddly, resonantly random moment occurs about a third of the way into Otto Preminger’s Where the Sidewalk Ends. New York City Police Detective Mark Dixon (Dana Andrews) is disposing of the body of a man he accidentally killed, lugging the corpse over his shoulder like a cumbersome sack of laundry. As Dixon plops the body in a car, we see a train far above him, high in the background of a gorgeously forbidding cityscape, briefly stopping in its tracks, priming us to assume that it will eventually somehow figure in the cop’s inevitable comeuppance. Yet the train never matters to the plot, retrospectively hanging unresolved in our imagination.

That train isn’t unimportant to this gripping noir, as it serves as a pointed embodiment of the way that the city in the film always seems to be crowding its inhabitants. The New York City of the film is the city of most American noirs: an expressionist painting of neon lights, harshly bright, rain- and blood-splattered streets and alleyways, and ominously vertical buildings that the canted angles deliberately make to resemble cages. The New York City of Where the Sidewalk Ends is really the Any City of our movie-nourished nightmares, and it’s always watching Dixon. And us. Preminger and cinematographer Joseph LaShelle often tellingly linger on visual details that suggest incarceration, such as, most literally, the bars over the windows of a prison, or, more suggestively, the beams of street railings or the panes of apartment windows that reveal the busy city to be ever-present even within people’s homes.

The city looms over the room of Ken Paine (Craig Stevens), the man Dixon will kill in a fist fight, setting the narrative in motion. The fight is legitimately not Dixon’s fault, though that ultimately doesn’t matter. Dixon attempts to interrogate Paine the right way, inviting him down to the precinct to tell the detective what he knows about mobster Tommy Scalise (Gary Merrill), who’s trying to frame Paine for a murder. Paine takes a drunken swing at Dixon, who retaliates in self-defense, killing the attacker with one punch. But this accident is coming right after Dixon’s admonishment by authorities for his brutal vigilante tactics, and he probably correctly assumes that the truth wouldn’t be accepted, deciding to contrive an escalating series of evasions.

Which is why the watchfulness of the city is particularly resonant. As with many noirs, Where the Sidewalk Ends is concerned with neurotic males who express their torment and uncertainty through violence, which only intensifies their self-loathing. We learn that Dixon has profound daddy issues: His father was a hood who gave Scalise his start in organized crime, meaning that the latter represents both a father and brother surrogate for the hero. Like many villains of many crime films of the 1940s and ‘50s, Scalise is subtly coded as homosexual, as he’s surrounded by a cadre of fit young henchman and given to melodramatically using nasal spray while issuing threats—an act involving a somewhat phallic object that also marks him as less than a man.

Dixon and Scalise are both “others,” apart from society. Scalise appears to be comfortable with this fact, while it eats Dixon alive. Noirs are often about the prejudices and the illusions of heteronormative mainstream culture, but they are most fervently concerned with a male protagonist’s fear that he isn’t good enough for acceptance into said culture, whether or not he wishes to “belong.” Dixon’s alone and adrift, with the city always seemingly looking down at him, mockingly, with its suggestion of elusive togetherness, which the film also reveals to be illusory. The life that eludes Dixon is embodied by a beautiful woman, Morgan Taylor (Gene Tierney), who’s nearly as un-have-able by Dixon as Tierney’s Laura was by, well, everyone in Preminger’s Laura.

Where the Sidewalk Ends is a crackling thriller/procedural, abounding in screenwriter Ben Hecht’s characteristically punchy dialogue and Preminger’s viscerally, velvety, elegantly intricate long takes, though there’s also, as in all of Preminger’s noirs, a subtextual undertow. The filmmakers fashion a poetic study of loneliness, weaving together a series of sharp episodes with characters who reveal a wealth of longing to us, often in just a few minutes’ worth of running time. Such as a witness (Grayce Mills) who tells the police that she sleeps in the living room so as to hear the city, which feels like a less isolated way to sleep after her husband died. Or Dixon’s partner, Sgt. Klein (Bert Freed), who has a heartbreaking scene where he talks his wife into giving her jewels up for collateral, so as to get a loan to give Dixon money.

Underneath the swift plotting, then, is a haunting examination of alienation and panic. Preminger and Hecht suggest that every single story—in life, in fiction—is composed of dozens of others, which are often as unresolved as the case files littering the cluttered desks of a police precinct.

The image really pops on this disc. Whites are strong, and the blacks deep and subtly varied, showing off the bold through lines of the compositions. Facial textures are vivid, especially the manly furrows in the visages of the hero and villain. Backgrounds are clean, sharp, and rich in memorable little details, such as the movements of the aforementioned train. The soundtrack preserves the careful mixing of diegetic and non-diegetic effects, most notably in how urban street sounds, particularly of traffic, are used to bridge studio-shot footage with location shooting.

Film historian and noir expert Eddie Muller offers an audio commentary dense with astute observations about Where the Sidewalk Ends and noir in general. Muller is particularly illuminating when discussing Otto Preminger’s formal inventiveness—his long, subtle takes, his ability to create compositions that essentially edit the film within the camera—and the various noir “types” that inhabit the narrative, such as the “bad cop” or the sickly neighbor who, in Muller’s words, is often “waiting around to be a plot point in a crime story.” The critic, who says he has asthma himself, wonders why it’s always the “slimy, beetle-browed gangsters” who have this infirmity, rather than the hero or heroine. Rounding out the package is an isolated score track, the original theatrical trailer, and an essay by film historian Julie Kirgo.

Twilight Time honors another key American noir with a beautiful transfer that’s complemented by an affectionate, informed, and lively audio commentary. This is an ideal way to revisit, or first encounter, an influential and evocative “bad cop” thriller.

Review: Les Blank’s A Poem Is a Naked Person on Criterion Blu-ray