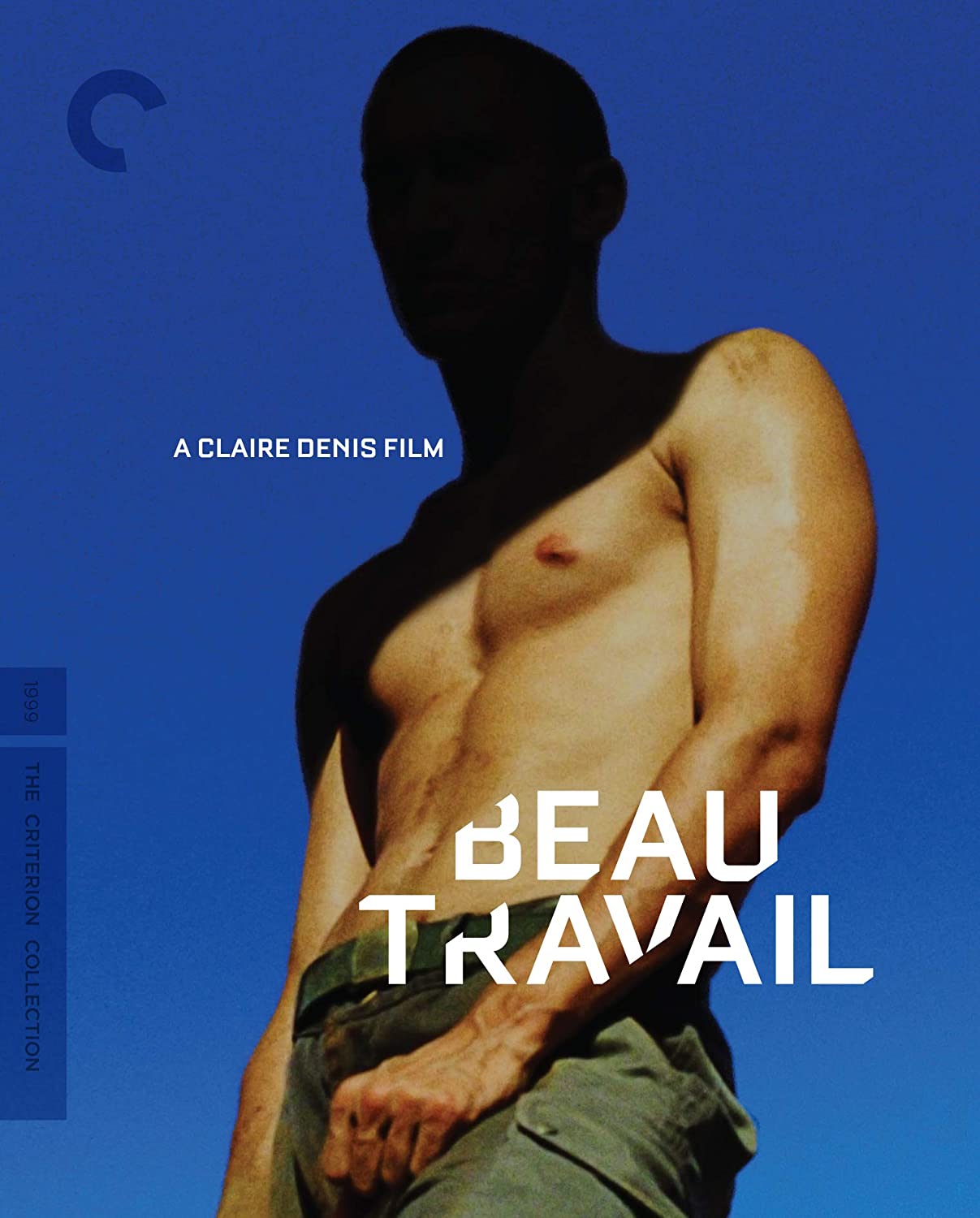 Claire Denis’s international breakthrough, Beau Travail, begins with a curious set of images. The first is a pan across a painting of a silhouette of soldiers in the French Foreign Legion done on the side of a rock wall in Djibouti, in the style of a cave painting—a faux-ancient artwork that gives the impression that the French were in Africa since time immemorial. A military song of conquest chanted over the image is then interrupted by the jolting sound of a kiss that kicks off an electronic dance track as the scene cuts to a local nightclub where women in colorful clothes dance elegantly with uniformed soldiers who move stiffly but aggressively as they possessively crowd up against the women. The effect of this juxtaposition of images is immediately alienating, stressing the intrusiveness that marks the relationship between the film’s main characters.

Loosely based on Herman Melville’s posthumously released Billy Budd, Beau Travail retains the core premise of the novella: A violent envy is born in a lifelong military man, in this case an adjutant named Galoup (Denis Lavant), by one of his new recruits, here a private named Sentain (Grégoire Colin). Though Galoup is a career officer who dedicates himself to the legion, the film’s editing makes it instantly clear how alienated he is from the men under his watch. Quick cuts juxtapose the camaraderie between the enlisted soldiers with the stony countenance of their superior, who always hangs back and watches them as they go about their daily duties. By contrast, Sentain is simpatico in every way, instantly charming the other soldiers upon his arrival, as well as the base’s commandant, Forestier (Michel Subor).

In the novella, the sexual tension transmitted between the main characters suggests a riptide, dangerous and under the surface. But Denis turns that frisson into a whirlpool, one that lures Galoup and Sentain to their doom. The film regularly highlights the way that Galoup stares at Sentain with a mixture of envy and longing, the stark difference between Lavant’s pockmarked face and Colin’s cherubic features further highlighting the friction between their characters. Oblique references to rumors that have dogged Forestier since his service in the Algerian War prefigure his budding interest in Sentain. Through stares and associative editing, the film suggests that this is the last straw for Galoup, whose deep existential connection to the legion is borne out as a love both filial and romantic toward his commanding officer.

Perhaps Beau Travail’s greatest show of faithfulness to Melville’s text is in its depiction of the paradoxically freeing nature of rigid military activity. There’s an almost ritualistic quality to the scenes of soldiers training in the deserts and coasts of Djibouti that, for all of the political connotations of legionnaires residing in a former colony, seems to place them outside of time. Adding to this sense of displacement are the cues from Benjamin Britten’s own operatic adaptation of the novella—dissonant choruses laid atop shots of the men running obstacle courses, wrestling, and assuming meditative tai chi poses. It’s in these scenes, through intercut close-ups of backs and arms moving in hypnotic rhythms and muscles rippling almost erotically beneath the actors’ flesh, that Denis and cinematographer Agnès Godard staked their position as the supreme cinematic poets of body language.

Beau Travail is rooted in specific political and historical contexts of French colonialism, frequently setting scenes of vibrant, colorful, and modern city life against the austere severity of the remote locations where the legion has set up its spartan bases. That juxtaposition is as much a reflection of the film’s deep and insoluble sense of history as it is a visualization of the war that rages within Galoup. This impressionistic rendering of masculine angst culminates in the film’s legendary ending, a suicidal vision in which the heretofore stoic, silently seething Galoup explodes in a feverish hallucination of dance that marks the only time in the film, and perhaps his entire life, in which the man sees himself honestly.

Beau Travail receives a 4K restoration that renders the film unrecognizable from its long out-of-print New Yorker Video DVD. Bright desert backgrounds that were once washed out and hazy now pop with amazing color separation, while flesh tones are significantly more natural. The film’s full sensuality can now be appreciated in the visible beads of sweat trickling down soldiers’ faces and arms, and the colorful beauty of Djibouti stands out even more, further emphasizing the elegance of both its cities and its harsh rural terrain. The soundtrack is likewise given a major upgrade; dialogue is always clear, while the intrusions of dance music and cues from Benjamin Britten’s opera are sonorous and pounding.

Recorded just after the first protests over George Floyd’s death, a discussion between Claire Denis and director Barry Jenkins foregrounds the film’s political content and the loaded racial subtext of its postcolonial context. From there, the two pivot into a broader overview of the film, including the process of working warily under the supervision of real legionnaires and the fact that Denis, surprisingly, didn’t intend for the film to be so homoerotic.

Interviews with actors Denis Lavant and Grégoire Colin abound in anecdotes about their time in Djibouti and surrendering to a shooting process that sounds every bit as intuitive and unspoken as the completed film. Cinematographer Agnès Godard provides a selected-scene commentary in which she breaks down several moments from Beau Travail with details about the challenges of the location shooting, including notes about which films stocks and lenses she used in order to be able to shoot in harsh light while also accurately capturing both white and black flesh tones. Even at her most technical, though, Godard praises the “spiritual” experience of shooting under isolated and harsh conditions.

A video essay by film scholar Judith Mayne focuses on Beau Travail’s use of music—namely the scenes set at the Djibouti nightclub—as a précis of the larger emotional, sociopolitical, and narrative strategies at work in the film. Finally, an essay by critic and educator Girish Shambu offers a holistic analysis of Beau Travail, from background details like Denis’s non-Melville inspirations to the visual articulation of Galoup’s sense of resentful longing.