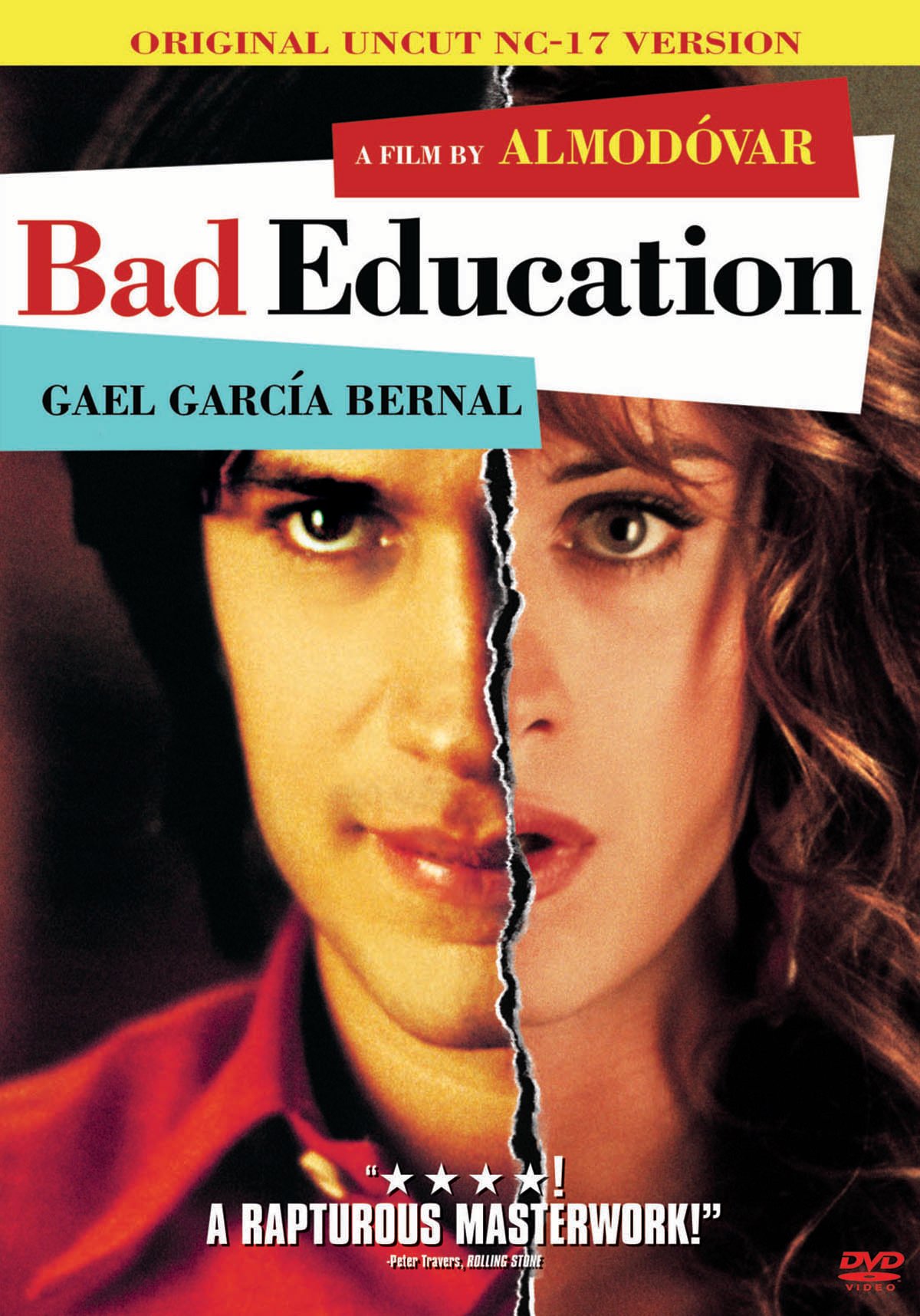 Now after more than a dozen films to his credit—from the punk-era gonzo comedy Pepi, Luci, Bom to the comatose rape dramedy Talk to Her—Pedro Almodóvar releases something of a greatest hits package: the spectacularly meta Bad Education, the story of two friends and their complicated love for one another and the cinema. For the first time in his career, Almodóvar has made a film that will appeal equally to fans of his anarchic screwballs (High Heels and Kika) and his more popular mainstream dramas (All About My Mother and Talk to Her). A giddy cinematic pastiche of film noir and high camp, Bad Education is about the shape-shifting artifice of dreams and the experience of going to the movies. If it isn’t the best film of Almodóvar’s career, it’s certainly his best work since 1987’s Law of Desire.

Ignacio Rodríguez (Gael García Bernal) walks into the office of film director Enrique Goded (Fele Martínez), who’s flipping through newspapers looking for a gimmick for his latest screenplay. Fascinated by the story of a dead man riding a motorcycle and, much later, the hysterical account of a woman eaten alive by alligators, Enrique’s writer’s block suggests a form of memory deprivation. In love with Enrique when they were students at a Catholic school in the ’60s, Ignacio reconnects the director with his past and suggests that he turn their experiences of abuse at the school into a film. But along with the film’s aspect ratio, realities and identities frequently shift, and it becomes increasingly difficult to tell truth from fiction and the ruthless desire to love with the even more insatiable desire to create.

More so than Bernardo Bertolucci’s The Dreamers, Almodóvar’s heartbreaking Pieta acknowledges cinema as an extension of the soul. Because it seems to touch on every theme and perversion seen throughout the director’s illustrious 20-plus-year career, Bad Education truly evokes the sensation of a Jackson Pollock “action” painting: Almodóvar’s canvas—like that of another hot-blooded drama queen, Federico García Lorca—is one of uncensored emotion and pure energy. There isn’t a single person in the film (or film-within-a-film) whose life isn’t fractured, states of unrest the director fabulously emphasizes by frequently situating actors before mosaic art or walls covered in paper decorated with jagged lines shooting in all sorts of directions.

Just as everyone remembers the silent film sequence from Talk to Her, no one will forget the “Moon River” scene from Bad Education. During a school retreat, a young Ignacio (Ignacio Pérez) is forced by Father Manolo (Daniel Giménez Cacho) to sing the Henry Mancini and Johnny Mercer classic while the boy’s buddies swim in a nearby spring. Unlike Talk to Her, Bad Education isn’t gimmicky, but it is schematic; this is because Almodóvar scripts a complex interpretation of the world by conflating movie dreams and sexual awakening. This subversive sequence is at once funny and tender: Almodóvar tastefully and cleverly obscures Manolo’s abuse of Ignacio at just the right moment (“Waiting ‘round the bend,” the boy sings), anticipating the masochistic role-reversal of their future relationship in the emotional back-and-forth of the song’s lyrics, much in the same way the scenes of the swimming children prefigures the incredibly erotic pool sequence between the two leads later in life.

Like Talk to Her, Bad Education similarly touches on themes of unconscious desire, except its characters are always, well, conscious. But being conscious doesn’t always mean being lucid, something embodied by Ignacio’s sad relationship to Enrique. Like Eusebio Poncela’s bond to Antonio Banderas in Law of Desire (and Naomi Watts’s obsession with Laura Harring in David Lynch’s Mulholland Drive), this power struggle is one part ego trip, one part wish fulfillment—a dangerous combination Almodóvar likens to our quasi-narcissistic relationship to movies. We respond most to films that reflect our deepest aesthetic and emotional passions and notions of the world. So when Enrique discovers—semi-spoiler alert—that Ignacio isn’t who he says he is, he continues the relationship because it’s easier on his conscience to accept that Ignacio turned into someone who looks like Gael García Bernal and not the ostensibly fictional junkie transexual from The Visit. And if truth is stranger than fiction in Bad Education, Enrique hopes to make it sell.

An embarrassment of riches, Bad Education addresses the almost vampiric relationship between audiences and movies—a give-and-take that helps Ignacio and Enrique keep their memories alive. As children they jerk each other off inside a movie theater that plays the 1969 melodrama Esa Mujer starring Sara Montiel as a naughty nun. Before they reach orgasm, Montiel’s face turns toward the camera and the children don’t miss a beat. Almodóvar understands the rapture of going to the movies, and if he had his way the director would probably never stop making them. Throughout Bad Education, memories and images repeat, none more memorable than a young Enrique (Raúl García Forneiro) leaving two lovers behind. In both cases, a gate impacts their separation anxiety, and the ecstasy and pain of the moment is not unlike leaving a movie you never want to end.

The sound is sparkling but the image is disappointing in spots: digital compression is good but some noise is noticeable during the film’s awesome title sequence, and edge haloes can be spotted during scenes with high contrast. As for that huge blurry circle that cover Gael García Bernal’s head when he goes down on one of his tricks: There’s nothing wrong with your DVD, you’ve just bought the R-rated version of the film. I can’t believe that Pedro Almodóvar allowed Columbia TriStar Home Entertainment to f*** with his film this way.

A predictably excellent commentary track by Almodóvar, two deleted scenes with Javier Cámara, red carpet coverage from the AFI Film Festival (there’s too much footage from the film spliced into the mix but Club Dread fans won’t want to miss how Almodóvar pronounces Penélope Cruz’s name), a teeny-tiny making-of featurette, a photo gallery, the film’s Spanish and American theatrical trailer, and trailers for Being Julia, The House of Flying Daggers, The Merchant of Venice, Bad Education, Imaginary Heroes, All About My Mother, Talk to Her, and El Crimen del Padre Amaro.

I wonder if Gael García Bernal is giving head or paying his electric bill underneath that blob of squares covering his head, which seems to be undulating up and down between a man’s legs.

Interview: Pedro Almodóvar on the Interlocking Themes of Parallel Mothers

The Films of Pedro Almodóvar Ranked

Review: Parallel Mothers Movingly Reckons with the Past’s Hold on the Present