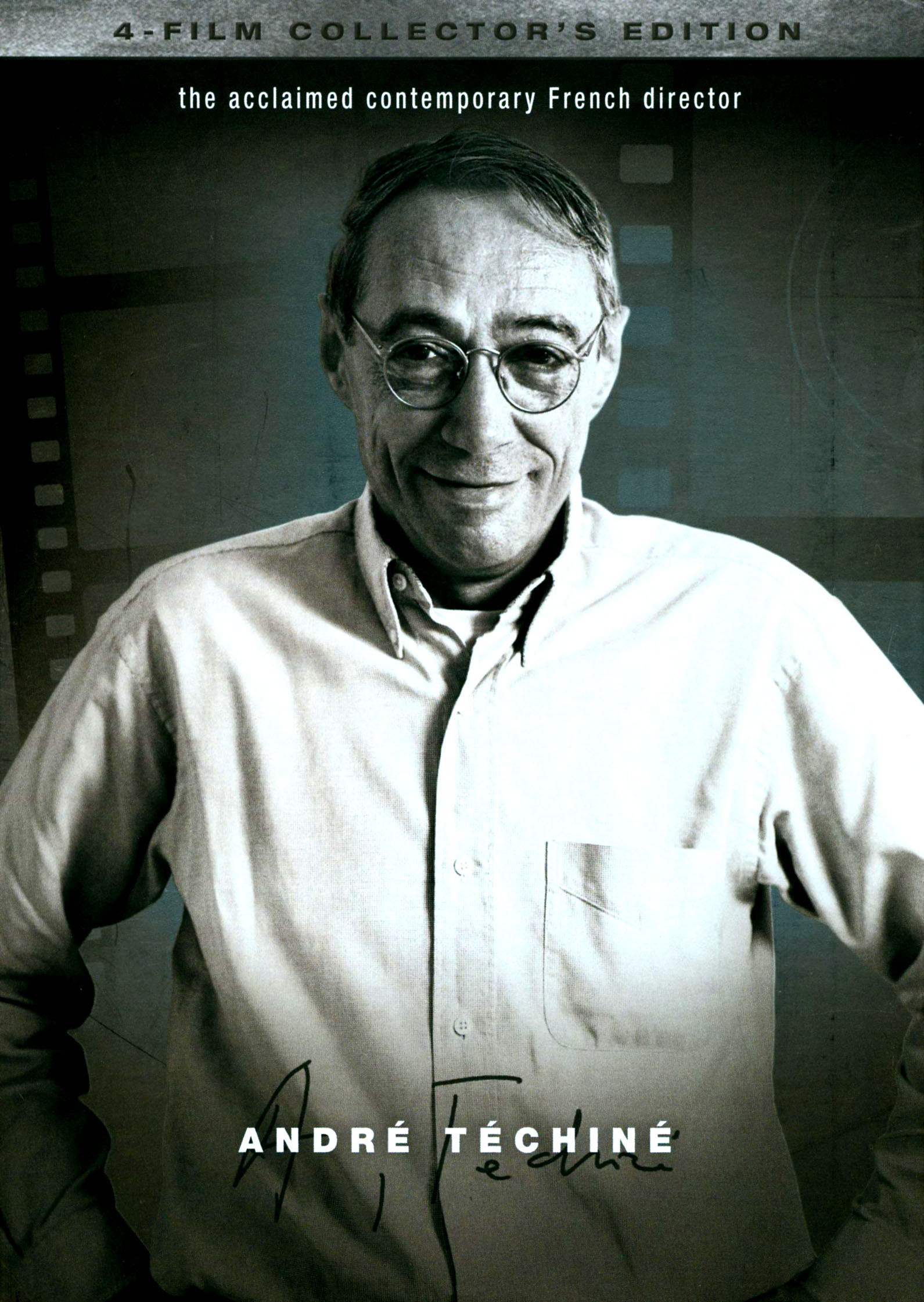 Despite a résumé of some 20 feature films since the mid ‘70s, André Téchiné is a strong candidate for the contemporary European filmmaker most underappreciated in America. With a generous but far from sunny humanism at the core of his oeuvre, seduction in its many forms and the barriers of class and race as regular themes, and a frequently gliding camera probing his characters’ passions and (often disastrous) judgments, Téchiné has built a body of work that might draw more U.S. attention if he was based in a cinematically “fresher” land; the art-house industry and audience, what’s left of them, have given a limited embrace to the boldest of French cinema’s post-nouvelle vague artists (favoring musty genre pics and the dopey whimsy typified by Amélie). Lionsgate’s new box set, including three films from Téchiné’s mid-career peak, can play a part in rectifying the neglect of the 65-year-old writer-director whose recent, affecting dawn-of-AIDS drama The Witnesses met with typically miniscule American distribution.

A touch of ill-fated Hitchcockian romance pervades 1981’s Hotel America, a deceptively smooth, pretty melodrama of unsuitable lovers set against the surf and sun of Biarritz. Catherine Deneuve is Hélène, a glamorous ex-Parisian and anesthesiologist, whose car nearly runs down local part-time tour guide Gilles (Patrick Dewaere) one night. Gilles, the floundering son of hotel operators whose longtime business is in the midst of renovation by a new owner, pursues an affair with reluctant Hélène, a woman with a secret: She’s held in Biarritz by the memory of her architect-lover, who drowned after building a mansion for the two of them to live in. She ultimately succumbs to Gilles and moves in with him to fill the void left by her tragedy, but his hard drinking, desperation and mistrust of her ability to let go of her ghost preordains their eventual split.

“You don’t feel good with me, do you?” Dewaere’s self-destructive layabout accurately diagnoses, “You’re still sleeping with him.” Hélène and Gilles are not the most plausible of couples even in a post-traumatic situation, but Téchiné balances the remarkably convincing interaction of tourists, transients and hotel staff in a resort town with the lovers’ increasingly messy confrontations (highlighted by an ostensible suicide attempt that quickly becomes a fully-clothed, knockdown-dragout grapple in foamy waves). Deneuve delivers the mystery and beauty (particularly in a stunning lime coat), but Dewaere, trapped by history and property more irrevocably than she is, is a feeble, pitiable prisoner of his own neurosis. Téchiné mitigates the darkness of Gilles’s figure with a penultimate moment of tenderness, a hopeful kiss between a 20-year-old girl and a sixtyish doctor linked by their love for Hélène.

Ten years later, Téchiné filmed the grittier I Don’t Kiss from an original scenario by Jacques Nolot, which opens with aspiring young actor Pierrot (Manuel Blanc) leaving his home in a Pyrenees village for an unanticipated life of struggle in Paris. An innocent bumpkin-hunkling whose dimples can equally flash a crooked grin or disgusted scowl, Pierrot rejects the counsel and connections of a gay TV interviewer (the ever-solid Philippe Noiret) in favor of becoming the kept boy of a semi-shamed bourgeois matron (Hélène Vincent), and when homelessness and ridicule in acting class devastate his ambitions, taking up nightly hustling in a cruising ground for men. Téchiné and Nolot don’t explicitly damn or judge Pierrot, and Noiret’s weary would-be patron (“Love serves one purpose only, and that’s to destroy”) finds his attempt to intellectualize the youth’s prostitution met with defiance: “It’s the only way I could feel free,” the rent boy all but snarls.

Still, I Don’t Kiss seems ultimately to stumble into a kind of sex-worker-centric sentimental bravado; when Blanc’s streetwise ex-naif falls fatefully in love with a girl hooker (Emmanuelle Béart), he’s bound to pay with his dignity and the all-too-literal violation of his sexual don’ts. The filmmakers don’t suggest Pierrot is a closet case or a future pimp, but for all their vivid chronicling of his nocturnal erotic demimonde, the film’s vicious climax has a whiff of moralism masked as The Terrible Truth. Yet Blanc, Noiret and Vincent supply hard and humane faces of anguish and yearning, and many of the motifs and themes (patronage, sex as a transaction or a weapon against death) reappear under a surer hand in The Witnesses.

Reteaming with his frequent star Deneuve for My Favorite Season in 1993, Téchiné wrote (with Pascal Bonitzer) a five-act family drama where she and Daniel Auteuil shine in one of the most probing, volatile depictions of an adult-sibling dynamic in modern film. Emilie, a self-denying lawyer with grown children whose marriage has stalled, and Antoine, a mercurial neurologist, rediscover old wounds and affections when their cool relationship is reanimated by the failing health of their stoic mother (Marthe Villalonga). What begins as a somewhat familiar domestic-crisis ensemble (with no less than a fistfight over a will on Christmas Eve) becomes essentially a two-hander for the stars when Emilie leaves her family and Antoine aggressively forces her to “take the next step” in managing both their mother’s decline and conquering her own passivity and fears. As in other films in the set, doors are repeatedly opened, closed and locked in head-on shots as characters flee, relocate or prepare to die.

Deneuve’s timid but angry woman in crisis is among the best testaments to her versatility and talent beyond her glamour-icon status. (Deneuve’s equally formidable performance in Téchiné’s Les Voleurs remains unavailable on DVD, though happily not the case for her graceful turn in his recent Changing Times.) Auteuil’s Antoine is a confrontational, risk-loving pain in the ass (“Grotesque…and proud of it,” he spits) who must give himself pep talks on reining in his instinct to insult; despite the role’s flamboyance, the actor’s chemistry with Deneuve makes for an exhilarating, big-hearted duet. Described edgily as “modern children” by their frail mother, Emilie and Antoine negotiate a combative reconciliation compelling enough to make My Favorite Season one of Téchiné’s best.

Wild Reeds is the only period piece in the box, a coming-of-age portrait of four teens at a Provence school in the early ‘60s who are all touched by sexual confusion and the waning months of the French-Algerian war. François (Gaël Morel) is an honor student awakened to his homosexuality by the strapping Serge (Stéphane Rideau), a lunkish farmboy who consents to get off with him on one never-to-be-repeated night in the dorm. François’s best pal Maïté (Élodie Bouchez), a committed Communist who speaks precociously of the evils of men (“branding women like cattle”), is crushed by her friend’s new interest and wary of Serge’s attentions to her. Brooding nationalist preppie Henri (Frédéric Gorny), who seethes at being repatriated from Algeria (where Serge’s brother has been killed), completes the quadrangle; he draws the ire of Serge and the faculty with his arrogance and careless studies, but fate takes a turn the night he abandons the school.

The adolescent raw material of Wild Reeds feels even more familiar than it was in 1994, but the turbulence embodied by the quartet of young actors is still natural, haunting and imbued with authentic youthful terrors. Despite missteps like a scene where Maïté’s teacher-mother envisions the anger of a dead student she failed to assist in evading his return to war, this bittersweet memory film won Téchiné perhaps his widest acclaim, and three Cesar Awards.

Shot with three different cinematographers, the four films have characteristically vivid urban nightscapes and sunwashed country settings (especially in I Don’t Kiss and My Favorite Season, photographed by Thierry Arbogast) that the transfer renders splendidly. Mono sound on all films is clear.

Perhaps Pierrot packaged this set, and still doesn’t kiss-no blandishments at all, not even trailers. Most U.S. viewers of Wild Reeds would probably have found a supplement on the Algerian War helpful.

DVD Review: Victor Sjöström’s A Man There Was and Ingeborg Holm