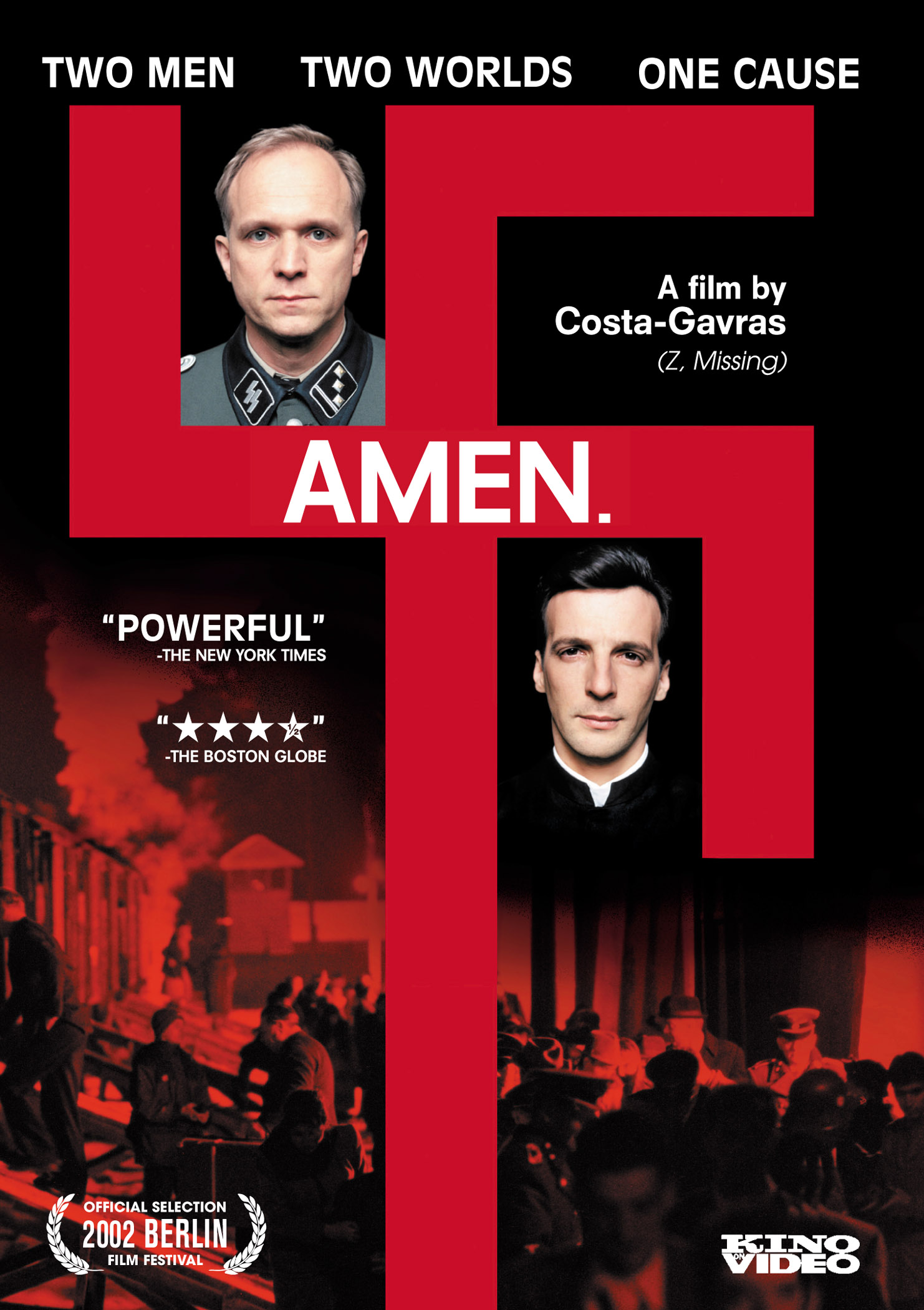 The Holocaust is in full swing in Europe and pressure is on the Vatican to denounce it publicly, which some argue would cause an overwhelming tide of public dissent against the Nazi party’s atrocities. But the Pope and those around him resist putting the Vatican at risk of retaliation from the Third Reich, and it’s clear that they consider a statement against Hitler to be the same as siding with Stalin and Russian Communism. One could scarcely wish for a more provocative historical state of affairs. No wonder Costa-Gavras, the hot-button-pushing rapscallion behind such fiery political dramas as Missing and Z, has made it a lifelong goal to film playwright Rolf Hochhuth’s controversial 1963 play “The Deputy,” which portrays Pope Pius XII as having turned a blind eye to the plight of European Jews under Hitler’s “Final Solution.” Amen concentrates on two men’s efforts to convince the Pope to speak out. SS Lieutenant Kurt Gerstein (Ulrich Tukur deftly conveys his character’s barely contained rage and smooth subterfuge) is horrified to discover the chemical formula he invented to purify dirty water on battlefields is instead being used by the Nazis to purify Germany of “undesirables.” Gerstein is a true-life figure, but Father Riccardo (Mathieu Kassovitz) is an amalgam of many solitary religious figures who found themselves helpless without the backing word of the Supreme Pontiff. Though it’s obvious that in order to diffuse any possible controversies that may sabotage the film’s veracity Costa-Gavras aims to be as ambiguous as possible and not make clear distinctions between good and evil, he can’t help but paint most characters with a broad stroke. For example, why should the Pope be portrayed so staunchly against Communism if not to be provocative? Though such elements might chip away somewhat at Amen’s seriousness of intent, they do add fire to the stimulating drama.

Amen is presented in an anamorphic 1.85:1 widescreen transfer that has both significant merits and faults. First the good: Colors are absolutely gorgeous, no more so than in the intentionally overripe scenes of serenity at the Vatican courtyards, which are characterized by rich red robes against impossibly blue skies. The print is also clear of blemishes and dirt. Unfortunately, it also has that gauzy, PBS-documentary look characteristic of format conversions. While it doesn’t really detract from the overall presentation, some will undoubtedly find it disappointing. The stereo sound is as good as can be expected from a two-channel mix. Voices tend to be presented a bit overbearingly, but this is likely a flaw in the source material.

Kino offers a rewarding 35-minute “making of” documentary that, while a bit too press-kit-like in nature, offers a remarkable and informal peek at the film’s sets as Costa-Gavras directs his actors. It doesn’t really offer any of the insider dirt or insight that the best documentaries often do, but it’s refreshing to see actor Tukur, so unabatedly intense in the film, loosen up as he plays the piano and sings to co-stars and crew members. Also included is a short excerpt of “The Deputy” and a scene from Amen that is meant to show the difference between the two, as well as the film’s press book materials. Finally, a well-rounded collection of theatrical trailers for Kino International items (including Code Unknown and Chihwaseon) is attached.

Costa-Gavras walks a fine line between portraying the soulless social allowances and ignorance that allowed the Holocaust to happen, and exploiting them for dramatic punch.

Review: Douglas Sirk’s A Scandal in Paris on Kino on Video DVD