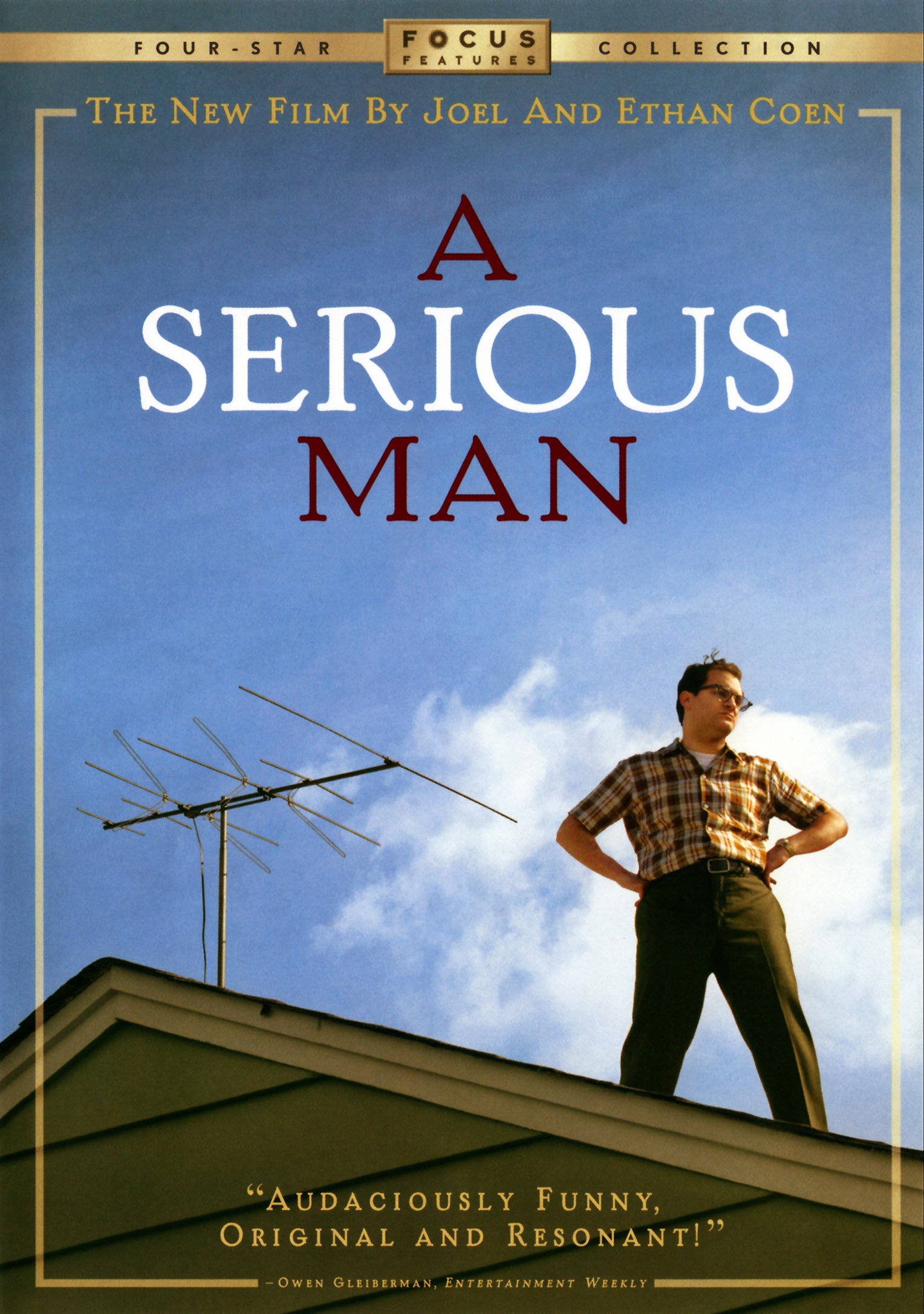 The camera descends from on high to a snowy Polish village in A Serious Man’s inscrutable, Yiddish-language prologue, and then, over the opening credits, slowly zooms from the pitch-dark inside of a character’s head toward the light of an earpiece blaring Jefferson Airplane’s “Somebody to Love.” The camera movements work as showy cinematic gags, but they also visualize a recurring criticism against Joel and Ethan Coen (that they’re prone to looking down on their own characters from a contemptuously Olympian vantage) and, maybe, the brothers’ riposte (that they are, in fact, working from deep inside those characters). The mix of wise-guy condescension and genuine compassion keeps up throughout the film, yet the opposing poles are more in harmony here than in any of the Coens’ pictures since The Big Lebowski. Both are absurdist comedies, though Serious Man’s ultimately grim worldview clearly makes it a post-No Country for Old Men work: Where Jeff Bridges’s Dude endured his tribulations with a rumpled suavity, Michael Stuhlbarg’s Larry Gopnick can only struggle not to scream as indignity after indignity is piled on top of him.

The film opens with a Rashi-attributed quote (“Receive with simplicity everything that happens to you”) and proceeds to put its protagonist to the test. A Jewish physics professor in 1967 Minneapolis, Larry watches in helpless horror as his suburban experience reveals a sunlit Hades. His position at the school is threatened by poison letters and a failing student’s insistent bribery, his brother (Richard Kind) is a socially-stunted parasite, his son (Aaron Wolff) is forever on the run from weed-dealing bullies, and his daughter (Jessica McManus) keeps stealing from his wallet. When his shrewish wife (Sari Lennick) reveals that she’s having an affair, Larry is the one expected to be “reasonable” and move out into a motel. Contemplating his world while on the roof to adjust the TV antenna, he sees bellicose gentiles on one side, and a ripe housewife (Amy Landecker) who “takes advantage of the new freedoms” on the other. “I feel the carpet has been yanked from under me,” he muses, shell-shocked. He seeks out rabbis for meaning, but they’re about as helpful as Buñuel’s priests. Trying to elucidate Heisenberg’s Uncertainty Principle in class, he merely ends up dwarfed by a gargantuan blackboard.

Are the Coens jokers who tread on despair, or tragedians with a penchant for death’s-head humor? Either way, Serious Man is their bleakest comedy. Its spiraling slapstick cruelty encompasses elements from both the lugubrious No Country for Old Men and the antic Burn After Reading , yet it easily outclasses both by endowing the put-upon puppet with a human dimension so that laughter is caught in our throats. Though as much of an abstraction as Billy Bob Thornton’s noir barber in The Man Who Wasn’t There, Larry Gopnick is a much fuller patsy, more individual than gimmick—not just due to the splendid every-mensch intensity Stuhlbarg brings to the role, but also to the sense that the Coens are indeed burrowing into the character’s pain even as they mercilessly spray him with slings and arrows from above. Examining their own heritage during a decade of cultural transition and confronting their snark-cloaked fears of a meaningless cosmos, the filmmakers are here playing both God and Job, and they’ve never seemed more naked. It’s no pun to say that Serious Man is a serious movie. Suffice to note that its soon-to-be-classic quip (“Accept the mystery”) is both a punchline and a statement of the Coens’ grave investigation.

For me, this near intolerable cruelty of a movie is saved by Roger Deakins’s stellar lensing, and the knockout transfer on this DVD edition does right by the master cinematographer’s visual nuances. Colors are striking, skin tones are accurate and detail-rich, as are blacks, which are never blotchy, and even the brightest scenes, however blue, however green, never appear overexposed. Edge enhancement, ghosting, and digital artifacts are nil—the better to enjoy the horrors of Larry’s life, I suppose. The surround track isn’t given much of a workout, given that the film is a largely dialogue-driven affair, but I can’t say I’ve ever heard Jefferson Airplane’s “Somebody to Love” sound better than the 500 times it plays during the film.

Ethan Coen plays with his fingernails on “Becoming Serious” as he and his brother Joel discuss the inexplicable opening of the film, as well as the autobiographical roots of the project. In “Creating 1967,” the cast reflects on the clothes they had to wear and the crew discuss the post-war atmosphere they tried to capture with their impressive costumes, production design, and art direction. Finally, the amusing “Hebrew and Yiddish for Goys” collects scenes from the movie that are laden with Hebrew and Yiddish dialogue, mercifully translated at the bottom of the screen for the goys sitting on the couch.

The film is notable for its aggressive miserablism, but also for its stellar photography, which this great transfer dutifully reveres.

Review: Tadashi Imai’s Bushido: The Cruel Code of the Samurai on AnimEigo DVD

Review: The Life & Times of Tim: The Complete First Season on HBO DVD