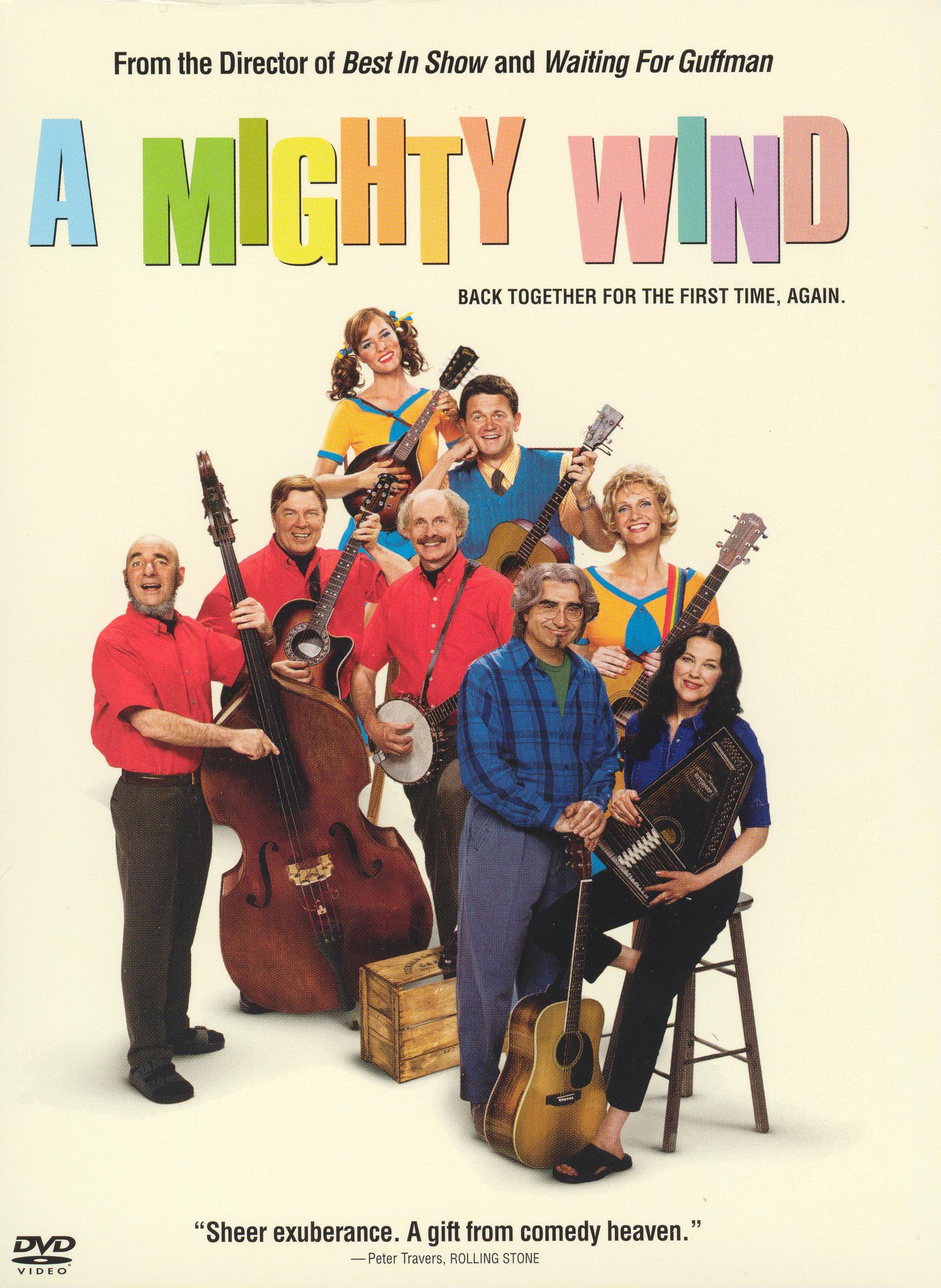 Joke-for-joke, it’s not that funny—but it’s almost poignant. Christopher Guest’s latest mockumentary, A Mighty Wind, takes dead aim at folk singers, and his parodies feel accurate: hippie-dippy album covers from long ago; male pattern baldness; songs about peanuts, freedom, earthy concerns, and kisses at the end of the rainbow. For those who’ve endured those insufferable Peter, Paul & Mary PBS reunion specials or Glenn Yarbrough’s warbling ballads, you’ll appreciate this gentle skewering of a value system from days gone by…and one that probably should have stayed there. Did the baby boomers ever really buy into these earnest, misguided notions of spirituality? Apparently so, but Guest recognizes that his folk bands haven’t really been able to roll along with the times. Reuniting in concert at New York City’s Town Hall, these dated icons brush off their tunes and give it one last shot.

The Folksmen (aging pretty boy Michael McKean, bass-voiced and bearded Harry Shearer, and shy goon Christopher Guest) are granola idealists who never grew up, and the Christian-meets-New Age “New Main Street Singers” promote their squeaky clean, Disney-pure philosophy evading a history of pornography, street life, and quack redemption. While the songs are spot-on perfect in their tenor and tone, the performances unforced and colorful (Parker Posey is a hoot, her hair curled into bright red pretzels with an unsightly tan to match), none of them are developed beyond a fleeting glimpse. Spreading himself too thin among the bands, the managers, the publicists, and the estate of these bands’ late producer, A Mighty Wind is appealing and moment-to-moment enjoyable but lacks the focus of Guest’s earlier films. He also takes a few resounding cheap shots at his characters, resorting to a sex change gag that’s inappropriate and condescending.

But the finest subplot belongs to Catherine O’Hara and Eugene Levy, superb as a former romantic song duo, now separated. O’Hara’s pained, winsome Mickey carries on with the show, fondly recalling her past with Levy’s formerly intense, now borderline insane Mitch. Levy hasn’t had a chance in recent years to show what a deft, inspired comedian he is, too often cast as goofball dads and buttoned-down nerds. Here, he’s a burned out space cadet looking for signposts, his fractured speech reaching for insubstantial metaphors. Even as their reminiscences drift into the absurd (a story about metal braces goes on far too long), there’s something in O’Hara and Levy that feels more tragic than silly, and their sidelong glances to one another searching for the spark of lost love ground A Mighty Wind in ways that transform this otherwise slight, streamlined Christopher Guest effort into well-earned sentimental bliss.

What with all the glorious retro colors on fierce display throughout A Mighty Wind, Christopher Guest makes it entirely too easy to screw up a video transfer. Edge enhancement is visible in some exterior shots, but otherwise this is a pristine transfer: sharp colors, rock-solid blacks and excellent skin tones. And what with the film’s actors constantly gabbing and singing, the Dolby Digital 5.1 soundtrack gets a mild workout. It’s not exactly expansive and everything almost sounds as if it’s on the same channel at times, but dialogue is perfectly audible and the songs come through loud and shrill, err, clear.

First the bad news: a monotonous Christopher Guest and Eugene Levy’s commentary track may be one of the worst ever recorded. The frequent dead air is easier to navigate than the mostly non-informative recollections. Then again, fans of the film’s dry humor may find something to this parched, mundane commentary. Now the good news: fifteen deleted scenes clock in at almost 30 minutes! Rounding out the disc are four TV appearances of the film’s fictional bands, the entire PBN TV Broadcast of the Concert, a soundtrack spot, a theatrical trailer, band bios and an easter egg (click on the guitar spring) with two behind-the-scenes making-of scenarios and two newspaper articles.

Funny stuff. That is, if you like the dry, incessant sound of crickets on summer evenings.