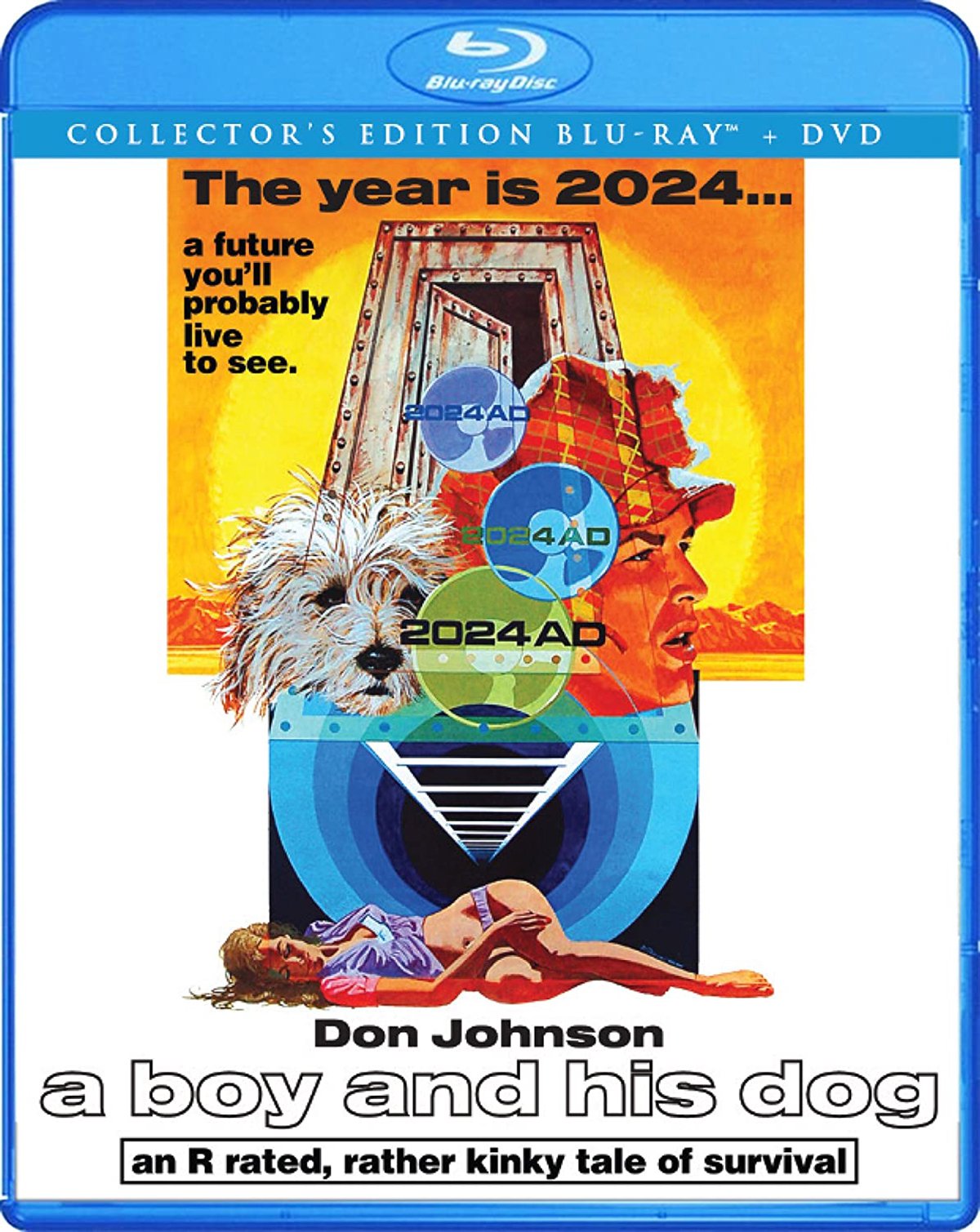 A small, graceful gesture is a telling indication of A Boy and His Dog’s conflicting yet oddly complementary mixture of scalding cynicism and sincere male-buddy reverie—sensibilities that ultimately share a bruised romanticism. Vic (the terrific and often absurdly underrated Don Johnson) and his telepathic dog, Blood (voiced by Tim McIntire), roam the futuristic post-apocalyptic countryside carving out their day-to-day survival. They have a simple agreement: Vic will help Blood find food, and the dog will, in turn, use his advanced senses to help the hormone-addled young man find women, who are logically in short supply in a desert world that appears to be ruled by marauding lunatic bandits. Vic and Blood soon temporarily hole up in a camp crudely fashioned as a theater to watch movies (which resemble 1930s stag pictures) and Blood badgers Vic to buy him some popcorn. Vic refuses and Blood pouts as popcorn sits unguarded almost directly below his nose. The dog could easily down a few cups with a minimal risk of reprisal, but he doesn’t. That would be bad manners.

Never mind that Vic and Blood make their living stealing food; the incident with the popcorn is different. Blood is the most sympathetic character in the film (admittedly there isn’t much competition) because he honors the rules of whatever the social context may be at the time. The rules in the desert are dictated by the universal notion of survival of the fittest, and a bandit that Vic and Blood rip off even almost literally tips his cap to the pair out of respect for their courage and ingenuity. But the theater is a haven, an attempt to conjure a pretense of a past society’s civility while hopefully avoiding the hypocrisy that partially enabled that society to annihilate itself. Blood shall not violate this casually erected monument to hope, or at the very least, he won’t compromise his own vision of himself as a gentleman of the wasteland.

Writer-director L.Q. Jones doesn’t belabor Blood’s honor, his pretentiously wielded erudition, or the obvious irony that the dog is the most educated and sensible character in the movie. The moment in the theater isn’t given any special, sentimental emphasis, but it sticks with you as a testament to the grace and subtlety the filmmaker displays until the somewhat disappointing third act. A Boy and His Dog is a very 1970s American movie; it’s essentially an outlaw western that voices explicit, symbolic disappointment and despair with the country’s government in the wake of the Vietnam War. Like Easy Rider and many others, it portrays superficially polite society as a rigged game that’s designed to insidiously imprison its inhabitants. A Boy and His Dog isn’t as self-pitying as most of the era’s fashionable hippie-martyr movies, though, because it doesn’t gloss over the self-absorption and corruption of the hippies.

A Boy and His Dog is a grungy, fleet, and lively film, and as such it’s a shame that Jones, a legendary character actor, didn’t work more behind the camera. The film celebrates the apocalypse as an opportunity for the oppressed of society to do whatever the hell they please without the Man lording over them. These characters rob each other and kill and rape one another, but at least their transactions are direct and decipherable. Harlan Ellison’s short story of the same name was more scathingly satirical of the Norman Rockwell fantasies that Americans use to sanitize their ugliest impulses, but Jones emphasizes the material’s often quite funny western elements. The outrage that fueled much of Ellison’s work was complemented by the poetry of the author’s language, and Jones finds an ideal visual equivalent to that prose in his gorgeous Scope vistas and sharp, unfussy staging. A Boy and His Dog is an unruly daydream capped with a surprisingly jet-black acknowledgment of humankind’s genetic destiny to ruin itself.

The Blu-ray of A Boy and His Dog offers a terrific image with appropriate grain levels and beautifully preserved colors. Scratches and other brief blemishes that were discernible on the prior DVD edition have been removed without compromising a strong attention to texture and detail. The English DTS-HD Master Audio 1.0 track also represents a distinct improvement over prior mixes of the film, particularly in the gunfights, which now boast considerably greater sonic gravitas.

The audio commentary by writer-director L.Q. Jones, cameraman John Morrill, and critic Charles Champlin is a loose and lively affair that offers the usual production anecdotes, which have, in this case, the benefit of being actively interesting. Jones discusses minute intricacies, such as the effect of preventing the dog’s tail from wagging, as well as the old low-budget director trick of deliberately shooting in Scope in an effort to achieve a low-cost production value. Better yet is the director’s nearly hour-long conversation with author Harlan Ellison, as the two are old friends who’re mutually well-versed in the performance art of discussing legendary work with a shrewd element of misleadingly blunt myth-making. Ellison is at his funniest when voicing his objections to Jones’s misogyny, which he rightfully claims to be a perversion of his own misanthropy. The trailer rounds out a package that illustrates the benefits of choosing a few great supplements in place of a smorgasbord of features that are tumbling over with banalities.

A Boy and His Dog is more than just your everyday post-apocalyptic western reverie of the joys of adolescent poon hunting.

Review: Watchmen Is an Intriguing Rebuttal to Its Source Material